Youth Politics and Dispelling the Image of The Terrible Turk with Selma Ekrem’s Autobiography, Unveiled 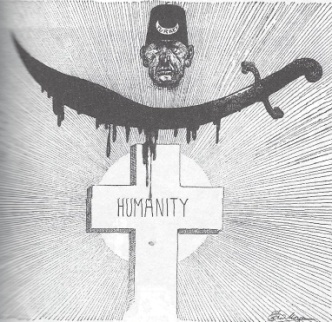 The Terrible Turk. Source: Justin McCarthy, The Turk in America: The Creation of an Enduring Prejudice (Salt Lake City: The University of Utah Press, 2010)

In the early twentieth century, American conceptions of Turkey were clouded by the mythological figure of the Terrible Turk or the exotic harem girl. These images emerged from popular representations of Turkish culture at the famed 1893 Chicago World’s Fair and were repeated in advertisements for Turkish tobacco in following decades. The Terrible Turk was a fearsome male character, brutal in methodology and appearance, dangerous and different religiously. This figure dominated American perceptions and tainted Turko-American relations. In a similarly debilitating fashion, a romanticized image of the harem also permeated American culture. Following this model, Turkish women, in contrast to their male ‘barbaric’ counterparts, were often viewed as sexually foreign objects that existed only within the confines of the harem, an ‘exotic’ space seemingly devoted to pleasure and excess. It was within this culturally alienating environment, as well as during a time of modernization (and de-Ottomanification) enacted under Ataturk, that Selma Ekrem, a Turkish immigrant to America, published her autobiography, Unveiled: The Autobiography of a Turkish Girl in 1930. Through the use of her childhood experiences, Ekrem sought to promote more favorable and distinctly modern views of Turkey to her western audience. Ekrem was able to accomplish this by her effective use of sympathetic and descriptive imagery in her autobiography. She asserted herself as a modern, Western-oriented female who seemed to share many characteristics with the ‘New Woman’ emerging in American society at the time.

From its initial publication, Unveiled was designed to capture the attention of a Western audience, appearing first in English. It was not translated into Turkish until 1998, a dozen years after her death.[1] According to scholar Carolyn Goffman, this suggested that “Ekrem was more interested in an American audience than in the readership emerging in the newly literate Turkish Republic.”[2] By focusing her work on an American audience, Ekrem would have been able to dispel the misconceptions of the Terrible Turk identity as well as insert her own, more modern notions of Turkish femininity into the discussion.

One example of Ekrem’s approach to redefining perceptions of Turkish peoples was her nostalgic portrayal of growing up in Turkey. Ekrem sought to familiarize the American youth with the ‘veiled land of the sultans’ by not only sharing her experiences as a child in the late Ottoman world, but also by including the tales which shaped her understanding of society, religion, and fate. Ekrem chose to base her story in the experiences of her “innocent” youth in order to challenge the publicly accepted notion of the Terrible Turk and, as the story progressed, the docile, subservient but sexualized Turkish female. 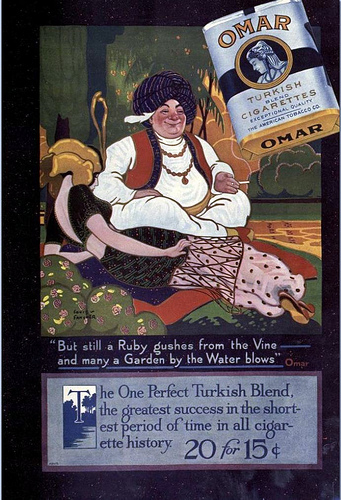 Throughout Unveiled, Ekrem took special care to mold her audiences’ perception of the events and people presented within the confines of her story. This was most notable in the way that she referred to her mother not by the Western title, but instead by the title Hanoum effendi. In so doing, Ekrem sought to connect shared maternal bonds to her Western audience while at the same time reminding them of her difference. At no time did Ekrem seek to distinguish herself as non-Turkish. On the contrary, she sought to erode the Western prejudices that, at the time, accompanied the Turkish ethnicity.

This inarguable depiction of her origins as being Turkish permitted Ekrem a more authoritative voice, allowing her to successfully engage in creating Unveiled as a propaganda attempt at portraying herself, her family, and much of the younger generation of Turkey as Western in orientation, thus nullifying the perceived east-west dichotomy within Turkey. Ekrem anticipated that her youthful American audience might have found “the details of life in an Ottoman household and the dilemmas of growing up female in a segregated society to be alien.”[3] However, by emphasizing the family and youth aspect of her experiences, Ekrem compelled “her readers to share her own Ottoman-Turkish–centric point of view.”[4] This was best accomplished in her discussion of the Islamic and Christian traditions.

Ekrem utilized her memories of a conversation that occurred between her older sister, Abla, and their mother to suggest the historic connections between Islam and Christianity to aide her American readers in better understanding Islam as part of a shared Old Testament tradition. During the conversation, the reader, as well as the young Turkish children, become aware of the shared religious experience of Jesus Christ as a prophet for both Muslims and Christians.[5] One could assume that Ekrem intended this passage as a means of addressing the concerns that her audience would have had towards her as a Muslim. Therefore, although religion did not seemingly play a pivotal role in her childhood, the scene was intended to assuage the fears of a Christian audience who would have assumed vast differences. 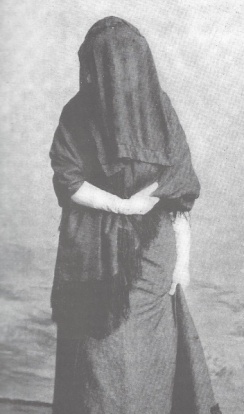 Though Ekrem consistently assured her audience of her proud Turkish identity she attacked the black tcharshaf, a garment which covered girls from their heads to their ankles and signaled their transition into womanhood. While her sister chose to begin the veiling process during adolescence, Ekrem refused. She then utilized the narrative of her refusal as well as recalled her act of disguising herself as a modern American woman trapped in Turkey as a result of wartime complications (a story first mentioned when she recalled her seemingly drastic decision to cut her hair into a bob), to display her Western-orientation. Ekrem “consciously [invoked] and [disrupted] Orientalist expectations of an East/West dichotomy by asserting a universal code of ethics, especially in relation to women.”[6] Through her defiance as a youth, Ekrem emphasized the alterations and tumult the emerging Turkey was undergoing as the last vestiges of the Ottoman Empire began to further decay.

The final example discussed occurred after her journey to America in which Ekrem sought to further dispel the notion of the Turkish harem as a center for sexual activity. During the conversation, two American girls declared that they “would simply adore to be in a hay-rem … [and] lie on silken cushions and eat sweets and watch the dancing of slave girls.”[7] In her most blatant statement about the true nature of Turkish femininity, Ekrem countered that “[t]his hay-rem you speak about exists only in your imagination.”[8] Through this final and deliberate statement, Ekrem collapsed Western-held Turkish fantasies and, as she had done through the use of the family, made the exotic seem quite ordinary.[9]

Within the confines of Ekrem’s autobiography rests not only a riveting exploration of the final hours of the Ottoman Empire, but one is allowed a unique glimpse behind the veils of Istanbul. What allowed for the success of Ekrem’s autobiography was not simply that it offered one a glimpse behind the curtain of uncertainty and the foreign that was Turkey. It has further merits in that, through her use of her childhood and female memories, Ekrem was able to begin to dispel the “vague ideas of daggers, veils, ephemeral silks and heavy incense”[10] that dominated one’s perception of Turkey and  to chink at the armor of the Terrible Turk, “[a] huge person with fierce black eyes and bushy eyebrows, carrying daggers covered with blood.”[11]

‘Unbelievable Originality’: Lining Tracks and Performativity in Zora Neale Hurston’s Folk Concerts
Asian American Solidarities in the Age of COVID-19
Review (Part One) of IAAS Annual Conference
Shadows in History: Religious and Intellectual History in Higher Education
Review of ‘Myths in Culture’ Postgraduate Symposium 2014
"An exceptional opportunity": Rachael Alexander on the role of BAAS Postgraduate Representative
‘You will find us still in cages’: Re-narrativizing African American History at the National Memoria...
“FACTS TAKE A BACKSEAT TO MYTHS” – BREXIT FROM AN AMERICAN PERSPECTIVE. An Interview with Leif Johan...