Home » Research » History » ‘You will find us still in cages’: Re-narrativizing African American History at the National Memorial for Peace and Justice

‘You will find us still in cages’: Re-narrativizing African American History at the National Memorial for Peace and Justice

The Equal Justice Initiative’s (EJI) National Memorial for Peace and Justice in Montgomery, Alabama, re-dramatizes America’s national narrative by leading visitors on a journey not from slavery to freedom but from slavery to mass incarceration. Rather than focusing on the ‘feel-good story’ of ‘courageous civil rights activists’, writes EJI founder Bryan Stevenson, ‘we want to tell not only the story of how destructive and traumatising slavery was but also the story of how it evolved’.[1] As opposed to the many Black history museums that centre an uplifting and progressive narrative, the EJI memorial foregrounds the continuation of racial violence and oppression in the United States. The idea is not to show how far we have come, but how far there is yet to go.

However, the EJI’s focus on racial violence risks contributing to what Elizabeth Alexander calls the public ‘consumption’ of ‘Black bodies in pain’.[2] Visual vocabularies established by the anti-slavery movement often centralised pained Black bodies as receptacles of violence to accommodate emotional engagement from white liberal audiences and consequently inspire activism. At a time when images and recordings of police violence against Black people dominate the media, critical examinations of visual representations of Black suffering—especially in commemorative contexts—are vital.

Drawing upon observational research gathered during a site visit in October 2018, this article will trace the narrative established by the EJI and analyse its representations of racial violence. Ultimately, despite failing to free itself completely of the confines of anti-slavery visual vocabularies, the EJI site establishes a narrative which connects the violence of slavery through lynching, segregation, and mass incarceration without relying solely on explicit recreations of violence, thereby making it an innovative and galvanising addition to the commemorative landscape. 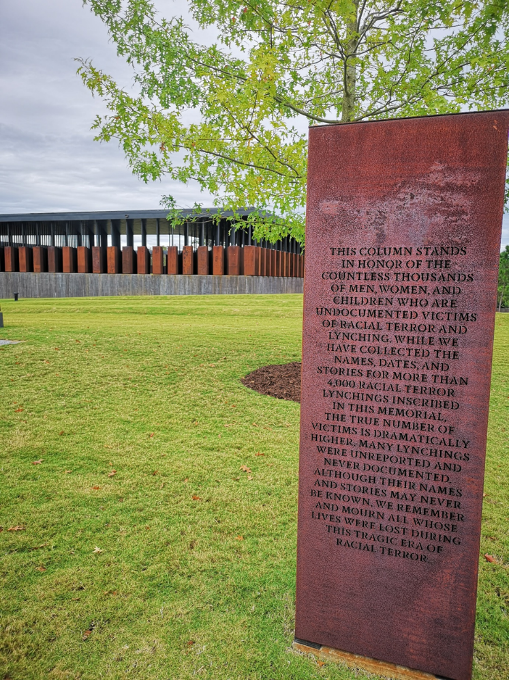 The National Memorial for Peace and Justice. Photograph taken by author. 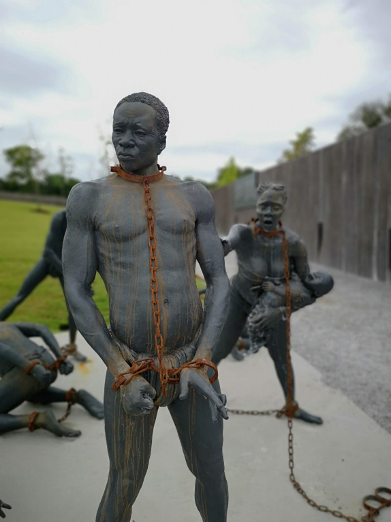 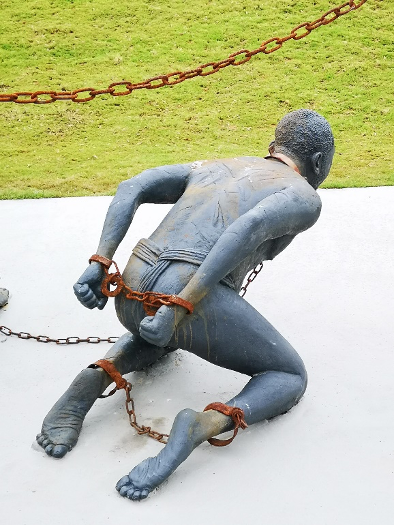 Bamfo’s memorial is the most explicit depiction of racial violence on site, and (perhaps for this reason) visitors are not permitted to take photographs of themselves alongside it. The EJI commissioned Bamfo to create the installation as a companion piece to his Nkyinkyim installation in Ghana, which is comprised of over 1300 ceramic heads. Bamfo was inspired by the funeral tradition of nsodie, practiced by the Akan people of West Africa, in which sculptors would create clay busts to  preserve ‘the memory and the likeness of the dead’.[3]

Yet, the addition of enslaved bodies—some of which are scarred, all of which are bound by iron shackles and collars dark with rivulets of rust—evoke the anti-slavery visual culture that used pained Black bodies as the primary vehicles to represent slavery. Visitors familiar with this visual archive may connect the scarred back in Nkyinkyim to that of Private Gordon, whose widely-circulated image is one of the most popular representations of American slavery. Others may see, in the agonised expressions of mother and child, the familiar anti-slavery images of Black families torn apart at the auction block. 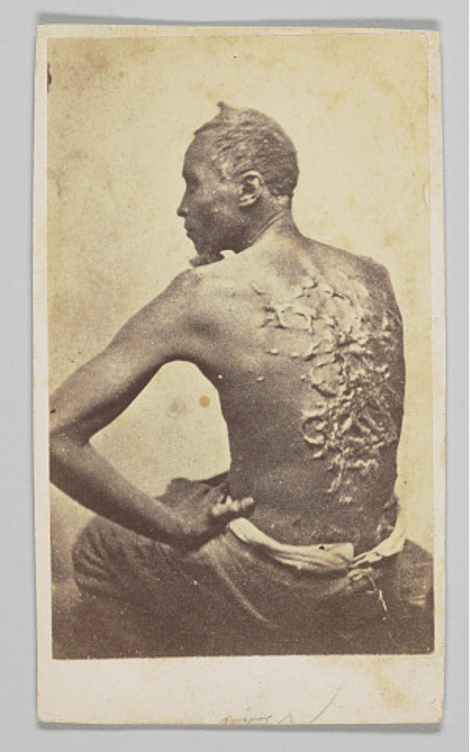 Carte-de-visite of Gordon Under Medical Inspection (1863), Collection of the Smithsonian National Museum of African American History and Culture (https://nmaahc.si.edu/object/nmaahc_2011.155.54)

The memorial clearly has an affective appeal: visitors to the site often commented on how ‘powerful’ the installation was. Unsurprisingly, they were moved primarily by the physical signs of distress visible on the bodies of the enslaved family. For example, many visitors pointed out the scars that are etched onto the back of the male figures; “Look at them. They’re in pain,” explained a father to his child.
Carte-de-visite of Gordon Under Medical Inspection (1863), Collection of the Smithsonian National Museum of African American History and Culture (https://nmaahc.si.edu/object/nmaahc_2011.155.54)

The EJI’s central memorial, however, avoids explicit depictions of violence against Black bodies. Instead, it uses abstract sculpture to evoke lynching’s violent spectacle. Comprised of over 800 corten-steel pillars, each representing a county in which EJI researchers have documented lynchings, the memorial begins at ground level. Visitors must navigate their way through the steel forest, often finding themselves face to face with another county, another list of murdered people. The steel, forged in Alabama, was chosen because of its variation in tone, its different hues a homage to the Black skin it represents.

Along the second stretch of the memorial the floor begins to descend, and the monuments rise. This spatial transformation further immerses visitors in the history of lynching as the steel pillars come to evoke hanging bodies. Visitors, who must now look up at the suspended pillars, are thus positioned as both witness and spectator, sharing a historical space with those who perpetrated the lynching as well as those who mourn(ed) the dead.  The third corridor tells the stories of more than ninety Black men, women, and children who were lynched. Around the corner, a water wall is dedicated to the thousands of unknown victims. 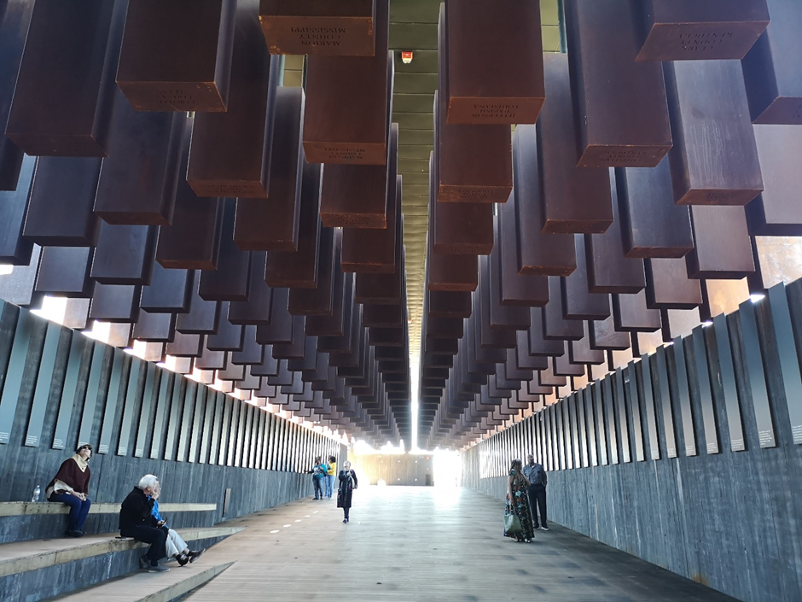 National Memorial for Peace and Justice. Photograph taken by author.

In the middle of the memorial’s four corridors, a grassy hillock provides views of downtown Montgomery and the river that once transported ships carrying enslaved African Americans. This space, in which one is both viewer and viewed, evokes the public spaces such as courthouse lawns where many lynchings were perpetrated. In the present, though, this visibility presents a challenge.  Stevenson points out that ‘when standing here, you are on view as well, faced on all sides by the names of the thousands who were run down, instantly judged and viciously put to death’. ‘You might feel judged yourself’, he said. ‘What are you going to do?’[4]

The memorial offers a possible solution. As visitors leave the main structure, they walk through a monument park containing a replica of each column. Laid side by side, the duplicate monuments are waiting to be claimed and erected in the counties they represent. The intention is that the monument park will become a dynamic visual record of those communities that have confronted their lynching history—and, more importantly, those that have not. 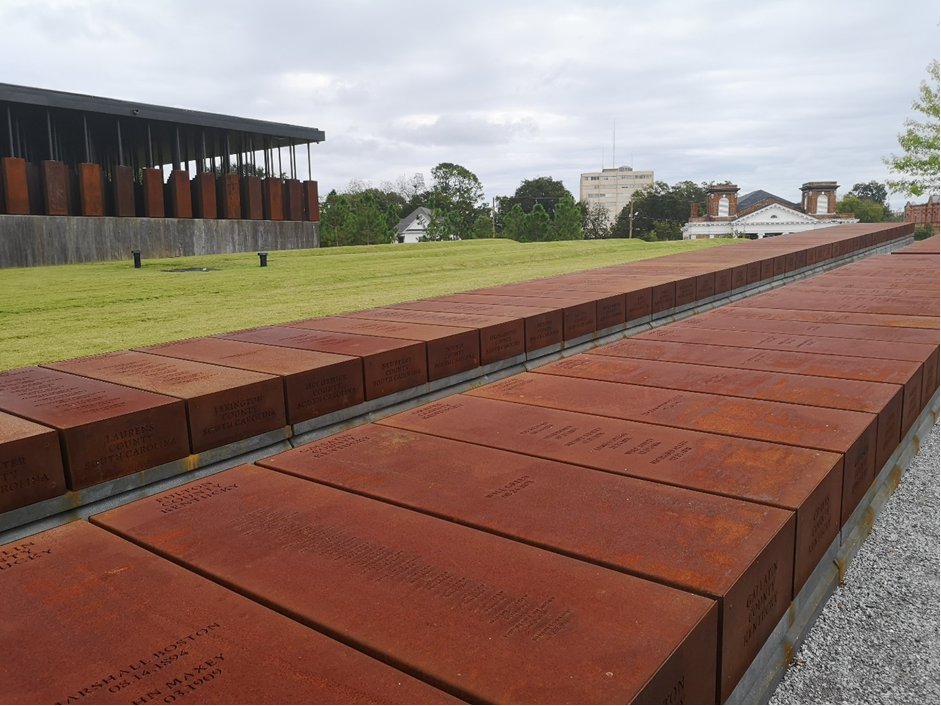 Monument Park outside of the National Memorial for Peace and Justice main structure. Photograph taken by author.

Further along the park stands Dana King’s Guided by Justice. The sculpture depicts three women, the foot-soldiers of the Montgomery bus boycott, who stand just beyond the Ida B. Wells Memorial Grove. Together, these memorials underscore the role of women in the anti-lynching crusade and the mass movement that gained momentum in its wake. As they head down the hill towards the exit, visitors are confronted with Hank Willis Thomas’s Raise Up, commemorating police brutality and mass incarceration. 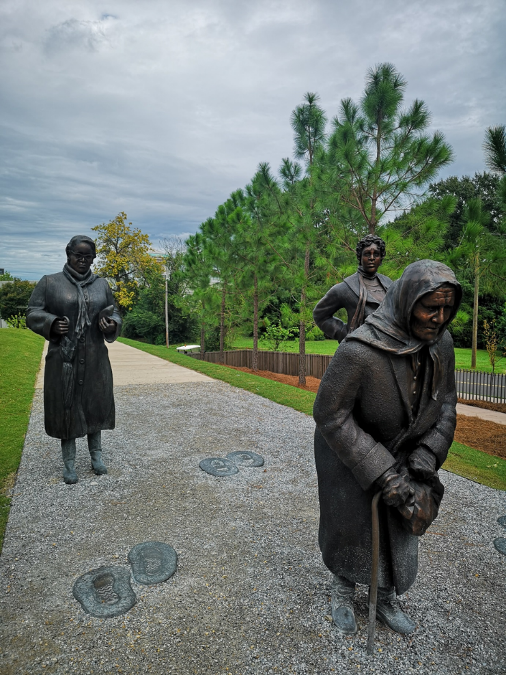 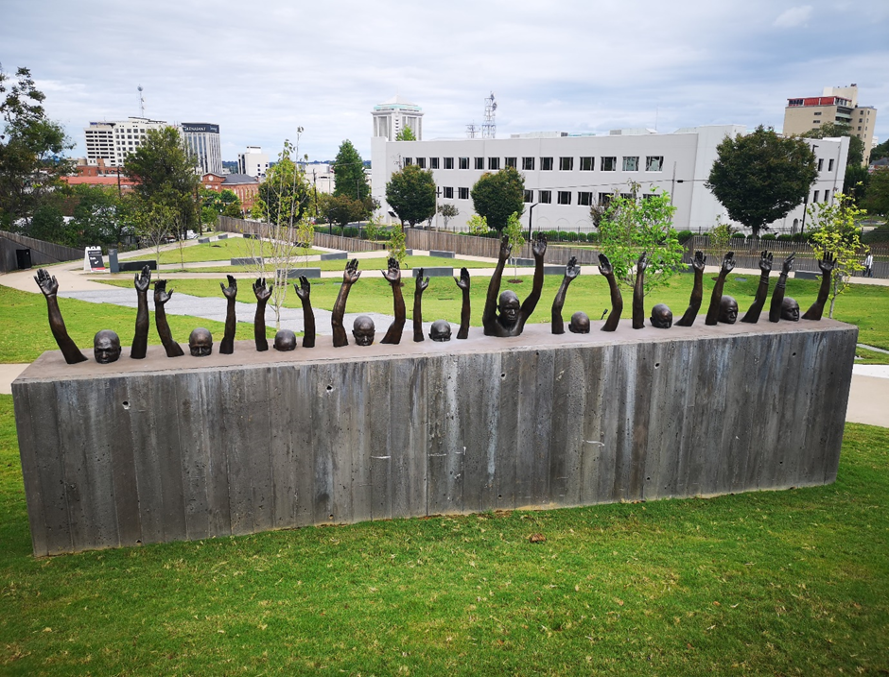 Ultimately, then, the EJI site leads visitors from slavery (the Nkyinkyim installation), to lynching (the National Memorial), segregation (Guided by Justice), and mass incarceration (Raise Up). Bamfo’s installation at the beginning is the only explicit depiction of violence against Black bodies, demonstrating how commemorative representations of slavery remain entrenched in anti-slavery visual culture. However, the remaining memorials evoke racial violence without such graphic displays, and the EJI’s call to activism relies upon the shame of each listed county to install their monument rather than upon some form of misplaced historical empathy with African American suffering. Together, the memorials at the EJI site work consistently and constantly to remind visitors that this violence did not just happen in the past but is happening still.

The final memorial is a granite pillar, similar in size and shape to the corten-steel columns of the National Memorial. The granite is inscribed with Elizabeth Alexander’s ‘Incantation’. Her words poignantly capture the EJI site’s message:

Ancestors, you will find us still in cages

You will find us still mis-named

Here you will find us despite

You will not find us extinct

You will find us here memoried and storied.

[4] Robertson, Campbell, ‘A Lynching Memorial is Opening. The Country Has Never Seen Anything Like It’, The New York Times (25th April, 2018), https://www.nytimes.com/2018/04/25/us/lynching-memorial-alabama.html

Autry, Robyn, Desegregating the Past: The Public Life of Memory in the United States and South Africa (New York: Columbia University Press, 2017).

Ifill, Sherrilyn, On the Courthouse Lawn: Confronting the Legacy of Lynching in the Twenty-First Century (Boston, MA: Beacon Press, 2007).

Shona Thompson is a PhD candidate in the History Department at Lancaster University. Her doctoral research, which is funded by the Arts and Humanities Research Council, examines commemorative representations of slavery and racial violence in the United States.

To Protect the Innocent: Does Comic Book Censorship to Prevent Youth Corruption Make Sense?
America’s Bloody Past: Massacre, Memory and Native American History
The Importance of Sherry Receptions; or, Where Are All The Women In This Archive? First Impressions ...
Counterpublics and the New Dynamics of Contemporary Conservatism: From the Tea Party to the Trump Mo...
Anglo-American Isolationism: The Case for New Archetypes
Storify of our #bookhour on Jonathan Franzen's PURITY
Veiled Interpretations of Du Bois’s 'The Souls of Black Folk' (1903)
60 Seconds with Olivia Wright

Shona Thompson is a PhD candidate in the History Department at Lancaster University. Her doctoral research, which is funded by the Arts and Humanities Research Council, examines commemorative representations of slavery and racial violence in the United States. Her twitter is @shona_thompson.
View all posts by Shona Thompson →
Tagged  Memorials and Popular Memory Series, Race Studies, Slavery.
Bookmark the permalink.