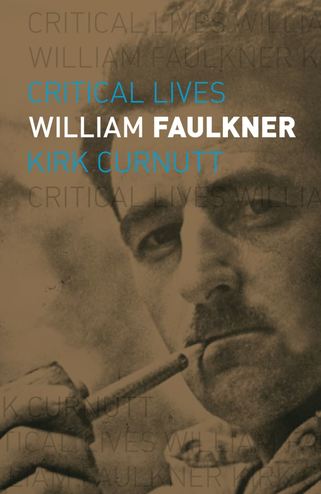 Kirk Curnutt’s William Faulkner, the latest in Reaktion’s Critical Lives series, is a valuable contribution to the abundance of biographical materials on Faulkner, one of the United States’s foremost modernist authors. In under two-hundred pages, Curnutt provides a concise, informative, and highly readable account of Faulkner’s life and work.

‘Sole owner and proprietor’ of Yoknapatawpha County (which he famously termed as his ‘own little postage stamp of native soil’[i]); author of nineteen novels and several dozen short stories; and winner of the Nobel Prize for Literature (1950) and the Pulitzer Prize (1955, 1963), Faulkner’s legacy and position in American letters is indisputable. At the same time, however, Faulkner was also a fiercely private individual, who balked at reporters and biographers intruding upon his home and family. In a letter to his editor, Malcolm Cowley, Faulkner emphasised his distaste for ‘photographs’ and ‘recorded documents’.[ii] He professed his ‘ambition to be, as a private individual, abolished and voided from history, leaving it markless, no refuse save the printed books’: ‘It is my aim, and every effort bent, that the sum and history of my life, which in the same sentence is my obit and epitaph too, shall be them both: He made the books and he died’ (285). In this volume’s introduction, Curnutt follows Joseph L. Blotner’s line in his mammoth, two-volume biography of Faulkner, that Faulkner was ‘an “impenetrable man”’.[iii] Curnutt argues that ‘understanding the relationship of Faulkner’s life to his art is not a matter of discovering the “man behind the myth”’; instead, ‘It is a matter … of learning how the man created the myth’ (12). Curnutt’s endeavour is successful; he offers a well-rounded, thorough account of a writer who aimed for immortality through literary art.

Structured around eight chapters (along with an Introduction and Afterword), William Faulkner initially covers the extended family history of the Fa(u)lkners, before charting the composition and publication of Faulkner’s oeuvre and how the events of his life shape an understanding of the events in his writings. Curnutt rightly highlights that Faulkner’s work emerges from the modernist fervour of the early twentieth-century, emphasising Faulkner’s indebtedness to, amongst others, Herman Melville’s Moby-Dick (1850) and James Joyce’s Ulysses (1922). At the center of Faulkner’s career is innovation: his debut novel Soldiers’ Pay (1925), released eight months prior to Ernest Hemingway’s masterpiece of the Lost Generation, The Sun Also Rises (1926), abounds with ‘soldier slang … Southern vernacular … letters, song lyrics, conversations staged in the form of theatrical scripts, stream-of-consciousness ruminating and even a choral interlude’ (57). Out of this modernist experimentation emerges, at the tail-end of the twenties, Faulkner’s first masterwork, The Sound and the Fury (1929), which broke new ground in American modernism by directly confronting issues of fragmentation, dislocation, mortality, race, sexuality, and time, building upon Joyce’s exploration of these same themes in Ulysses.

Alongside these issues, Curnutt expertly emphasises the importance of Faulkner’s Southern origins. Born and raised in Mississippi (later residing in Oxford, a town he would fictionalise into Jefferson, Mississippi in his Yoknapatawpha cycle), the importance of the South and “Southerness” in Faulkner’s work lies at the center of his career and any understanding one may have of his work. Curnutt draws upon one of Faulkner’s earliest mentors, Sherwood Anderson (author of the gorgeous Winesburg, Ohio [1919], a short story cycle about a town which serves as a Northern precursor to Yoknapatawpha County), as proof. Anderson once told Faulkner, after the failure of his first two novels, that ‘“You’re a country boy; all you know is that little patch up there in Mississippi where you started from. But that’s all right too. It’s America too”’ (67). Given Faulkner’s later transformation of his ‘little patch up there in Mississippi’ into canonical literary art, one would liked to have seen Curnutt explicitly link Anderson’s advice back to Faulkner’s preoccupations with modernism. Anderson’s words echo Joyce’s contention that ‘“For myself, I always write about Dublin, because if I can get to the heart of Dublin I can get to the heart of all the cities of the world. In the particular is contained the universal”’.[iv] That minor quibble aside, Curnutt’s early chapters on Faulkner’s aesthetic development do a wonderfully thorough job of situating Faulkner’s literary output in the context of the early twentieth-century. The remainder of Curnutt’s book charts Faulkner’s development from his modernist roots, emphasising his ambitious, innovative, trail-blazing, and oftentimes controversial endeavours to defy claims that he was a ‘mere regionalist’ (95).

The main purpose of William Faulkner is to provide a concise, accessible introduction to the work and life of its subject. Curnutt successfully accomplishes his undertaking. The book is not intended to rival or supersede previous Faulkner biographies, such as Blotner’s compendious contribution, which Curnutt aptly points to as ‘the starting point for charting the life’ (11), or Robert W. Hamblin’s Myself and the World: A Biography of William Faulkner (University Press of Mississippi, 2016). While Faulknerians may continue to turn to Blotner because the span of his exploration and comprehensiveness of his methods, Curnutt’s approachability and accessibility is precisely what makes this volume indispensable. Curnutt provides readers with a clearly and deeply researched history of his subject, which abounds with expertise and scholarly fortitude. The value of Curnutt’s contribution is precisely the objectivity and brevity at the heart of his project. In sum, William Faulkner is a worthy contribution to Faulkner studies, a mighty achievement suitable for reading across all levels of the academy.

[ii] Selected letters of William Faulkner, edited by Joseph Blotner (London: The Scolar Press, 1977), 285. All further references to this work are incorporated into the text.

[iii] Kirk Curnutt, William Faulkner (London: Reaktion Books, 2018), 11. All further references to this work are incorporated into the text.

Ahmed Honeini has recently been awarded his PhD in the Department of English at Royal Holloway, University of London, where he also currently teaches. His thesis is entitled Saying Yes to Death: Mortality in William Faulkner's Fiction. His primary research interests are Faulkner, literary modernism, and American literature and drama, 1900-present.
View all posts by Ahmed Honeini →
Tagged  Biography, C20, Masculinity.
Bookmark the permalink.