War Among All Puerto Ricans: The Nationalist Revolt and the Creation of the Estado Libre Asociado of Puerto Rico (part three)

In the third and final post on the Puerto Rican Uprising of 1950, Dr Harry Franqui-Rivera discusses the political aftermath of the revolt.

The battle in Puerto Rico was over. By no means had it been bloodless.  Eighteen Nacionalistas had been killed and eleven wounded.  Seven policemen and a Guardsman were killed while twenty-one police officers and eleven soldiers were wounded.  A fireman and two civilians also died during the gunfights.  After his arrest, a still defiant Albizu Campos declared that the “nation was undergoing a glorious transfiguration.”[1] By contrast, Muñoz Marín instead talked of the “tragic and useless death of 31 Puerto Ricans.” He was quick to also link the revolt to the “island’s Communists” since the local authorities claimed that a few had joined Albizu Campos and his diehard followers.  He admonished the Nacionalistas, claiming that “a government founded on votes cannot be destroyed.”[2] He sought to link the revolt to what was perceived as the biggest enemies of western democracies: fascism and communism.  During the post war years the West faced the spectrum of decolonization wars while the red scare took hold over the American public. Muñoz Marín presented himself and the Populares as offering a peaceful way, “a peaceful revolution” to remedy the island’s colonial status while remaining aligned with the West and upholding its values. Moreover, just like he had previously offered to turn Puerto Rico into a showcase of Point Four for the rest of the world, Muñoz Marín now presented the commonwealth formula as an example in decolonization and democracy for the whole world to watch and follow.  Muñoz Marín’s “peaceful revolution” narrative was indeed attractive to the U.S. and other colonial powers.

The revolt also had an extra-insular chapter. On 1 November 1950, Nacionalistas Oscar Collazo and Griselio Torresola attempted to assassinate President Truman in front of the Blair House in Washington.  Torresola was killed in the attempt, and Collazo was seriously wounded and captured.  Pvt. Leslie Coffelt, a White House guard, was shot and killed by the assailants and two other guards were wounded during the gunfight.  During a press conference the next day, shrugging off the attacks and lamenting the unnecessary loss of life, President Truman reaffirmed his commitment to support the right of Puerto Ricans to write their own constitution. The continental press followed the White House’s line and quickly reported that these attacks did not reflect the will of the vast majority of Puerto Ricans. The Nationalists, both the island and the continental press argued, represented less than half of a one percent of the Puerto Rican population and their tactics and ideology were repugnant to most Puerto Ricans.[3]

Governor Muñoz Marín passed his first test with flying colors as he quickly suppressed the revolt and succeeded in discrediting the Nationalists, especially after the assassination attempt on the president.  Furthermore, the local and continental press presented the insurrections as a local affair.  Even though martial law was declared – which entitled the White House and the continental U.S. Army troops on the island and in the Caribbean region to a more prominent role in containing the insurrection – Muñoz Marín and the colonial administration made sure that only the Insular Police and the Puerto Rico National Guard participated in the affair.  The commander of the U.S. Army units in Puerto Rico and the Antilles, Brigadier General Edwin L. Sibert, turned his units’ ammunition over to the National Guard during the insurrection, but did not provide aid in any other way.[4]

The insurrection was in fact a Puerto Rican affair in the sense that it was a battle over the island’s future. Puerto Rico had been a colony of the United States since 1898 after the American metropolis intervened in the war of independence that Cuban rebels had been waging against Spain sporadically since 1868 and continuously and decidedly since 1895. Puerto Rico was ruled initially by a military government. By 1900 it came under civilian rule due to the Foraker Act- but its government was but a colonial administration with a presidentially-appointed governor heading it. In 1917, through the Jones Act, Puerto Ricans became U.S. citizens but the colonial situation remained basically unaltered. However, in 1946 president Truman named a Puerto Rican, Jesús T. Piñero, as governor and openly supported making this office an electable one. In 1948 Luis Muñoz Marín became the first elected governor of the island and quickly moved towards securing more autonomy – a path that the White House and most of Congress supported. In 1950, the autonomy that the PPD was trying to secure, and that Congress was willing to grant, was showcased as a peaceful path towards decolonization and full democracy. But, did Puerto Ricans really want to walk that path, and, could they handle it?

All of those involved, and all the dead and wounded during the revolt were Puerto Ricans commanded by Puerto Ricans. But besides the obvious nationality of the participants, the revolt was a Puerto Rican affair in the sense that it was the Nacionalistas’ last ditch effort to stop P.L. 600. They had hoped to bring the international community on their side but succeeded in doing the opposite. The revolt was suppressed quickly and with almost the same number of casualties on both sides.  The outcome of the revolt served to prove the viability of a Puerto Rican autonomous state and to discredit those arguing that the island would descend into chaos if left in the hands of the Puerto Ricans. On 3 November, a day after the last Nationalists in Jayuya had surrendered, Muñoz Marín made a personal radio call for all women to register for the coming referendum and the next day for all males.[5]  Far from blocking P.L. 600 the Nacionalistas had to deal with the fact that a record 779,695 Puerto Ricans, including 157,393 new voters, registered themselves to vote in the coming referendum.[6]  The Nacionalistas’ military wing had been defeated, their leaders imprisoned, and their ideology popularly rejected.

Roughly a year after the insurrection, while awarding medals to policemen, national guardsmen and firemen, Muñoz Marín declared that the Nacionalistas believed that they had the right to “impose their views on the people by violent means” and could not respect the will of the people as expressed through the electoral process.[7]  The Nacionalistas had hoped to derail the referendum and the Populares’ project of decolonization. Ironically, their actions provided the Populares with the opportunity to link their project to local and global decolonization and democracy. 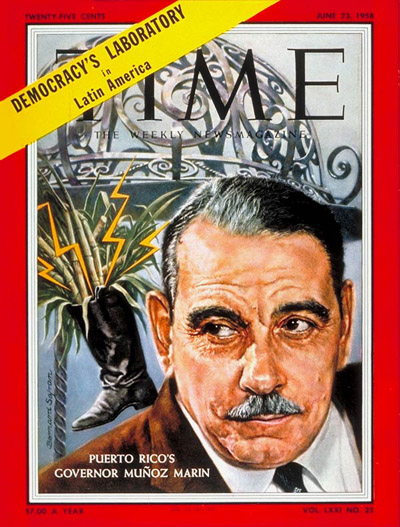 On 4 June 1951 the people of Puerto Rico voted by a large majority to accept the provisions of P.L. 600.[8] Following the referendum, the Puerto Ricans elected delegates to a constitutional convention on 27 August. The constitutional convention, led by Fernós Isern, convened in San Juan on 17 September 1951 and concluded its deliberations on 6 February 1952.  The constitution it adopted was submitted to the people of Puerto Rico in a referendum on 3 March 1952 and was passed by an overwhelming majority.[9]  On 22 April 1952, in a special message, Truman recommended that Congress grant early approval of the constitution drafted by the convention and argued that such action would be evidence of the United States’ adherence to “the principle of self-determination and its devotion to the ideals of freedom and democracy.”[10]  The constitution was approved by Congress on H.J. Res. 430 and signed into law by the President on 3 July 1952. Upon signing the constitution Truman reiterated the importance of the event for the free world.[11]

After the acceptance by the constitutional convention of the conditions of approval and the issuance of a proclamation by Governor Muñoz Marín, the Constitution of the Commonwealth of Puerto Rico became effective on 25 July 1952, exactly fifty-four years after the American invasion. The date could not have been more symbolic for the constitution was supposed to erase all traces of colonialism, including the anniversary of the island becoming an American colony. Many continental politicians thought that the establishment of the Commonwealth showed that the United States was not only “disposed to increase the well being of Puerto Rican fellow citizens but was willing to allow them to define for themselves the relationship they would establish with the federal union.”[12] Truman remarked that the “American people should take special pride in the fact that the constitution was the product of the people of Puerto Rico.”[13]   These comments are representative of how important it was for the United States to prove its adherence to the principles of self-determination.  Soon afterwards, Muñoz Marín asked President Truman to stop submitting annual reports on Puerto Rico to the United Nations, a decision which led the international organization to remove the Island from the list of non-self-governing territories on 27 November 1953.[14] According to both the Puerto Rican and the U.S. government, the island had ceased to be a colony, and the U.N. had certified the end of the United States as a colonial power.

It would soon become evident that that the mere re-appropriation of symbols does not change systemic oppression – including colonialism. During its first years, the ELA and the populares project for the socio-economic restructuring of the island (Operation Bootstrap) seemed to work miracles and the island came to be known as la perla del Caribe (the pearl of the Caribbean). Under Muñoz Marín’s guidance the ELA enjoyed local and international support. By the early 1970s, however, the ELA’s socio-economic project seemed to have run its course and the populares started to lose the overwhelming political power they once had. To this day Estadistas, Independentistas and Nacionalistas denounce the ELA as a colonial scam, a type of “colony light” arrangement, and call for true decolonization. The decolonization question remains a main concern for Puerto Ricans with all parties except the populares arguing that it is the key to solve the island’s socio-economic crisis.

[14] Trías Monge, Trials of the Oldest Colony in the World, (New Haven and London: Yale University Press, 1997), 120-124. The General Assembly of the United Nations approved Resolution 748 (VIII) to cease the transmission of information on Puerto Rico by a vote of 26-16, with eighteen abstentions.

Configuring The Dream Factory: Prince Fans and Destabilisation of the Album in the Digital Age
The Stettheimer Dollhouse: A Life and Salon in Miniature
"Be broad, be bold and be aware": Review of the 2014 HOTCUS Postgraduate and Early Career Researcher...
American Women Writers and Wars on Foreign Soil—Part One
Book review: The Royalist Revolution by Eric Nelson
“The most invisible and outcast group”: Discovering Gay Youth in the Archives
Review of Culture and the Canada-U.S. Border 2014 Conference
How Nineteenth-Century White American Women Writers Have Facilitated the Rise of Christian Feminism