War Among All Puerto Ricans: The Nationalist Revolt and the Creation of the Estado Libre Asociado of Puerto Rico (part one)

In the first of three posts examining the Puerto Rican Uprising of 1950, Dr Harry Franqui-Rivera discusses the political developments that led to the nationalist revolt. 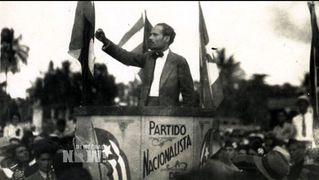 In his inaugural address of 20 January 1949, President Harry S. Truman announced that, as leader of the free world, the U.S. was bent on combating the “false philosophy” of Communism, not just by strengthening its military alliances with “peace-loving” countries, but by its determination to “work for a world in which all nations and all peoples are free to govern themselves as they see fit, and to achieve a decent and satisfying life.”[1] He emphasized that the U.S. sought no territory, that “we have imposed our will on none”, and that “the old imperialism – exploitation for foreign profit – has no place in our plans.”[2]  Moreover, the U.S. was to embark on a new plan to make available its technology and expertise, as well as its capital, to the underdeveloped world.  This policy was known as Point Four, a global version of the Good Neighbor policy. Truman believed that to defeat Communism, the U.S. had to convince the world that it did not intend to create a world empire, nor did it want to possess colonies.  Accordingly, decolonizing Puerto Rico became a priority for his administration.

On 13 March 1950, Antonio Fernós Isern, the Puerto Rican Resident Commissioner in Washington D.C. (representative to Congress), and ideologue of the Popular Democratic Party (PPD), inspired by Truman’s Point Four, introduced a bill in the House (H.R. 7674) to provide for the organization of a constitutional government in Puerto Rico. It was also presented in the senate that same day (S.3336).  In a statement before a joint Senate and House committee, the first elected governor of  Puerto Rico and leader of the PPD,  Luis Muñoz Marín, declared that approving these bills would be of great value to the United States, “which is constantly accused by the Latin American countries and the Communists of running a colonial system.”[3] Unlike his lukewarm and even antagonistic remarks regarding previous bills, Muñoz Marín’s statements were not adversarial. He linked the situation of the island to the greater fight against both Communism and colonialism. In fact, after Truman’s inaugural speech, Muñoz Marín had offered to make of Puerto Rico a world showcase of Truman’s Point Four. The gesture was reciprocated.  The atmosphere during these hearings was congenial, at least between the PPD Populares and the members of Congress.

Most Congressmen agreed with Muñoz Marín’s views, and one even pointed out the positive effect that a recent visit to Haiti by elected Puerto Rican officials had had on their Haitian counterparts.[4]  Moreover, members of Congress noted that passing this bill could only “elevate our position before the United Nations”, especially since the United States was a signatory to the United Nations charter and therefore had to adhere to the calling for self-government included in it.[5]  Others emphasized that its adoption would advance the “defense of democracy in the eyes of the world, and especially with our fellow Americans south of Rio Grande.”[6]

Although the Independentistas tried to call into question the legitimacy of the legislation and of Muñoz Marín’s government, Congress gave its blessing to the Senate version of the bill.  On 30 July 1950, Truman signed the Congress Act of 3 July (S. 3336), into Public Law 600 giving the Puerto Ricans the right to write their own constitution and to establish a relationship with the U.S. in the nature of a compact.  P.L. 600 authorized the people of Puerto Rico to organize a republican form of government pursuant to a constitution of their own choosing but the act itself would become effective only when accepted by the people of Puerto Rico in a referendum.  As these hearings were coming to an end, congressmen exhorted Inés Mendoza (Muñoz Marin’s second wife) to address the audience. She declared that “this growing solidarity [between the U.S. and P.R.] will be paid back to the U.S. someday.”[7]  Her words could not have been more prophetic. Soon los hijos de este país would be fighting in the hills of Korea alongside the United Nations and against each other in the hills and towns of Puerto Rico.

A referendum was set for 4 June 1951 in which the Puerto Ricans would cast a vote to “accept” or “reject” the provisions of P.L. 600. Muñoz Marín and the Popular Democratic Party, the Populares, enjoyed broad popular support.  Having overwhelmed all the other political parties and alliances during the general elections of 1948 they were firmly in control of the political apparatus in Puerto Rico. Although acceptance of P.L. 600 in the coming referendum was hardly in doubt, that is not to say that there was no opposition.  The staunchly pro-American Estadistas opposed – at least in principle – what they regarded as a perpetuation of the island’s colonial status and an obstacle to achieving federated statehood.  The only chance the Estadistas had was to convince the voters to reject P.L. 600 and to have a congress-sponsored plebiscite including statehood and independence as options. The Independentistas were in a similar predicament.  They had obtained even fewer votes than the Estadistas and their efforts to stop passing of P.L. in Congress were fruitless.  They chose to campaign against the acceptance of P.L 600 by exhorting their members to abstain from voting in the referendum.  However, even when combining their mass appeal with the rest of the parties opposing the PPD, they were still unable to match the Populares’ strength.  Furthermore, the popular Socialist Party supported P.L. 600, which made its passing almost inevitable.

The political parties were just too weak to stop the PPD. The Nacionalistas, however, had long ago shunned the electoral process as a means to obtain their goals.  A violent confrontation pitting the nationalists’ Ejército Libertador and the Puerto Rico National Guard and Insular Police was about to shock the island.  The nationalist leader Pedro Albizu Campos, who had been convicted of sedition and conspiracy to overthrow the government of the United States in 1937, returned to Puerto Rico from New York City on 15 December 1947, four years after being released from federal prison on probation.  He immediately started a campaign to derail the PPD’s projects and ordered the mobilization of the Ejército Libertador once more. Only a day after his return Albizu Campos held a press conference and warned the U.S. that after depleting all peaceful means to obtain independence, the “Nationalist Party would resort to the use of force to attain its goals.”[8]

His threats also targeted Muñoz Marín.  Albizu Campos’s threats also targeted Muñoz Marín, declaring that he “must be stopped and we will stop him.”  Muñoz Marín responded by publicly warning Albizu Campos to abstain from violence. Recognizing that identity plays an important role in Puerto Rican politics, Albizu Campos resorted to put in doubt Muñoz Marín’s puertorricanes – and that of those who would not fight to free the island from American control. He also demanded that Puerto Ricans abstain from voting in the 1948 general elections, condemned the teaching of English in Puerto Rico, declared that “every person serving in the Selective Service Boards should be shot”, and commanded the Nacionalistas to start arming themselves with “revolvers, rifles, guns, shotguns, knives and daggers to defend the cause of the Revolution.”[9]  Despite Muñoz Marín’s warnings, Albizu Campos’s diatribe continued unabated.  On 23 September 1950, during the anniversary of the Lares Revolt of 1868, he addressed the crowd gathered in Lares’ Plaza Pública and spoke against P.L. 600 and the participation of Puerto Rican soldiers in the Korean War.  He ended his speech by calling on Puerto Ricans to defy the U.S. and its colonial pawns in the same way that “the men of Lares defied despotism, with revolution!”[10] One of the most important battles over Puerto Rico’s future was about to begin.