Video Games and American Studies: Weirding the Empire in West of Loathing and Other Digital Games

Weirding the Empire in West of Loathing and Other Digital Games

The Western has long had an ambivalent relationship to the spatial construct and the concomitant ideology to which it owes its existence. Since its inception in dime novels in the mid-1800s, the genre has gradually turned the West into a highly functional myth employed ‘in the service of politics’ and cast in place of ‘historical fact’.[1] Whether in the form of vaudeville, movies, or digital games, the American West has proven the ideal setting for hiding colonial practices in plain sight—a placeholder name that euphemises the earliest attempts in the post-Revolution United States to empire. Indeed, the West has been a construct of necessity in the popular imagination. Even if the West did not exist, the United States would have needed to invent some version of the myth for the sake of a plausible argument in defense of the aggressively expansionist US empire.

By closely examining the indie, role-playing, digital game West of Loathing (2017), I look at the ways the Western genre engages with the US empire and troubles what it stands for in the digital gamescape. Furthermore, I step beyond the game’s comical and surrealist façade in order to cast a closer look at the ways it de-mythologizes and parodies the US West in a subtle, pun-oriented sub-generic rendering of the Wild West, that is, the Weird West. 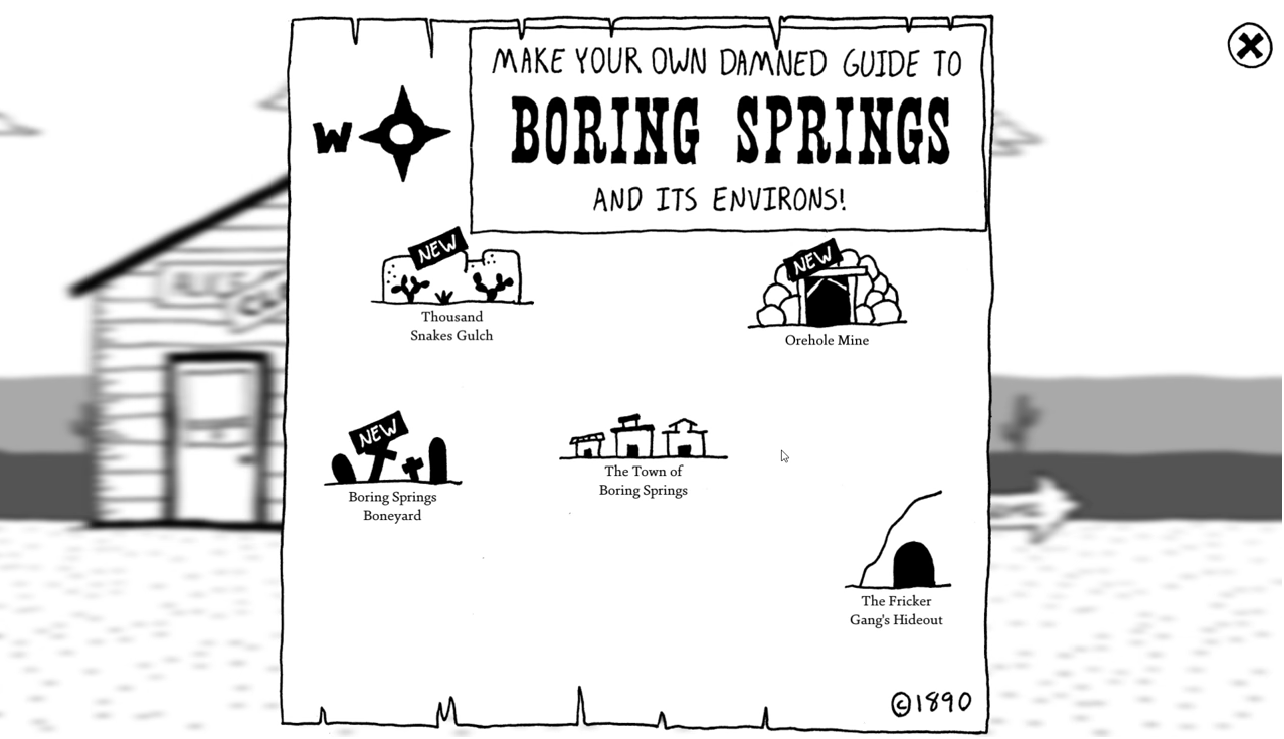 Necessary as it is, the West has always been an ambivalent and ambiguous construct. On the one hand, in earlier imperial calculations of the young expanding nation, the American West was ‘both colony and empire,’ with San Francisco as its capital.[2] Later, it was claimed by both conservative and progressive discourses, flagged as colonial and national, and marketed as nature-loving and industrially brutal. In a sense, then, the Western makes room for double-imaginaries, as writers and readers ‘imagine western narratives as conservative or progressive, conformist or subversive’[3]—one central result being the application of the genre to various, at times contradictory, sociopolitical ends.

The ambivalences and contradictions at the heart of the genre are amplified in the sub-genre of the Weird Western. Weird Western narratives, such as the independent digital role-playing game West of Loathing , trouble the classic Western, as they

…weave elements of the fantastic into traditional Western plots, characters, and settings to create stories that complicate, reinforce, and comment on our understanding of Westerns and the West, both as a reinvention of one of our most tradition-bound genres and as a spectacular reaffirmation of one of its central premises.[4] 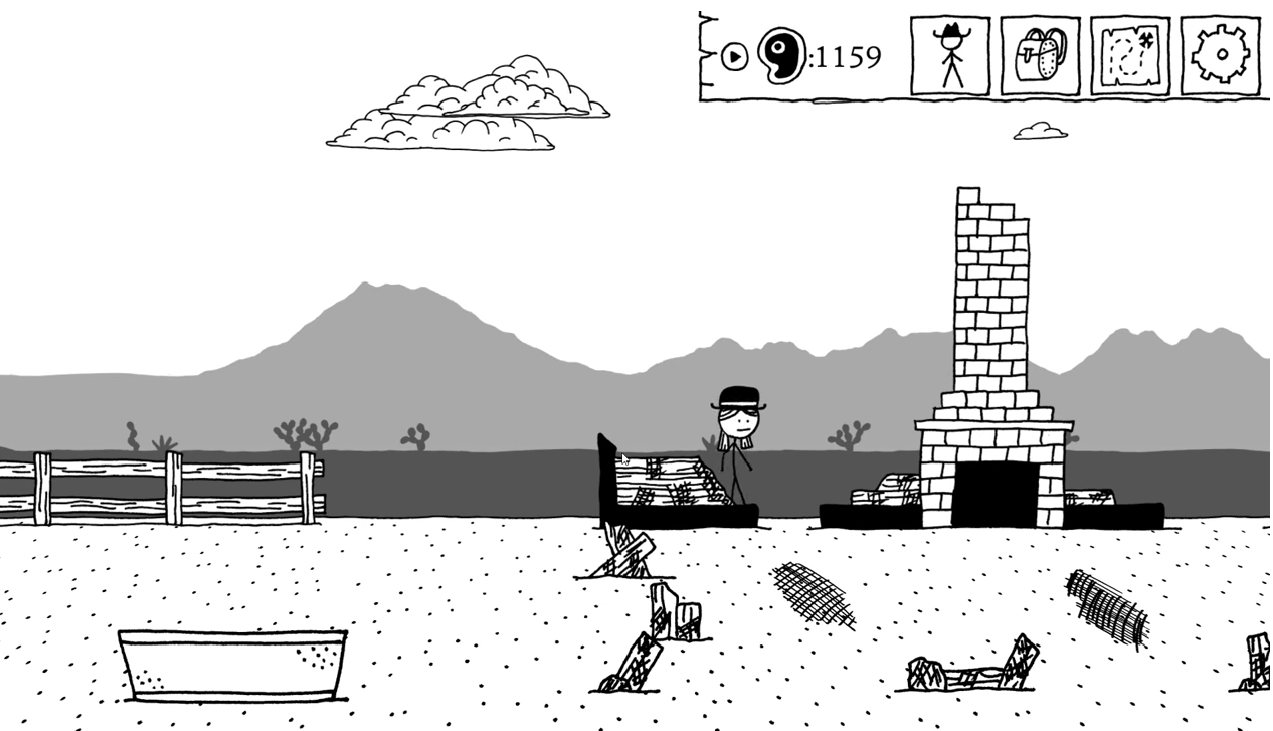 Sending a rookie cowboy on a series of quests in an imaginary Old West, the 2D West of Loathing is reminiscent of classic Westerns and features typical tropes of the genre: target-shootings and duels, encounters with rival bandits, and sentimental bonding between on-the-move pioneers and in-the-making national spaces. As a Weird Western, however, West of Loathing complicates the genre’s aspirations to historical accuracy. It empties the West of any racially marked Native Americans, nullifying the possibility of the classic ‘Anglo-Indian’ aggression. In this way, West of Loathing questions established binaries toward the ‘true’ pioneer and their enemies. 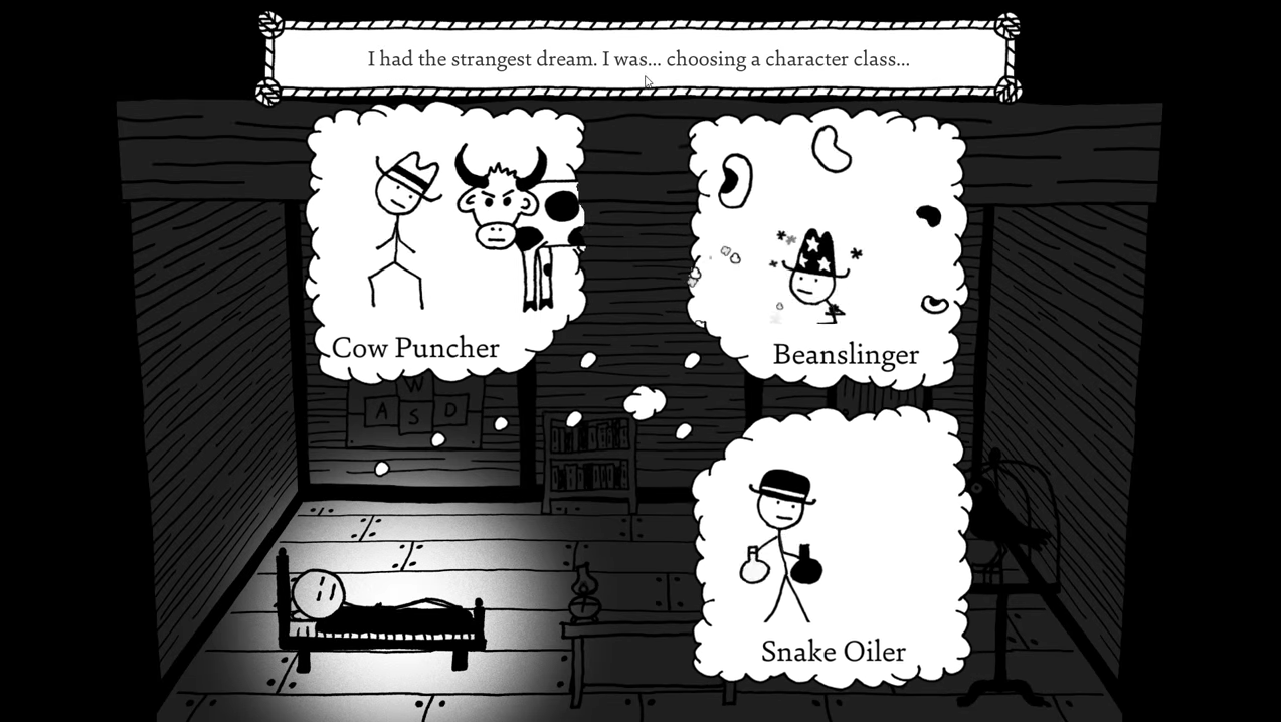 With trademark black-and-white minimalistic graphics, West of Loathing sends its central character—a generic, a-historic and simultaneously pre-historic, seemingly de-racialized and genderless Anthropomorph—to the Old West.  Here, the uncharacteristic pioneer has frequent, near-absurd, deadly encounters with as atypical and unlikely enemies as poisonous rattlesnakes, floating cow skulls, and solitary skeletons. In a manner typical of Weird Westerns, the game injects its story of individual quest with the fantastic, the surreal, and the absurd. Like other Weird Western narratives that make use of Gothic or science-fictional narrative conventions, encourage subversive plot twists, celebrate anti-heroism, or even parody the foundations of the classic genre, West of Loathing’s central character is a lousy cowboy who travels west either to help others, to get rich, or to overcome boredom. The enemies include gangs, colonising cows, necromancers, and goblins. 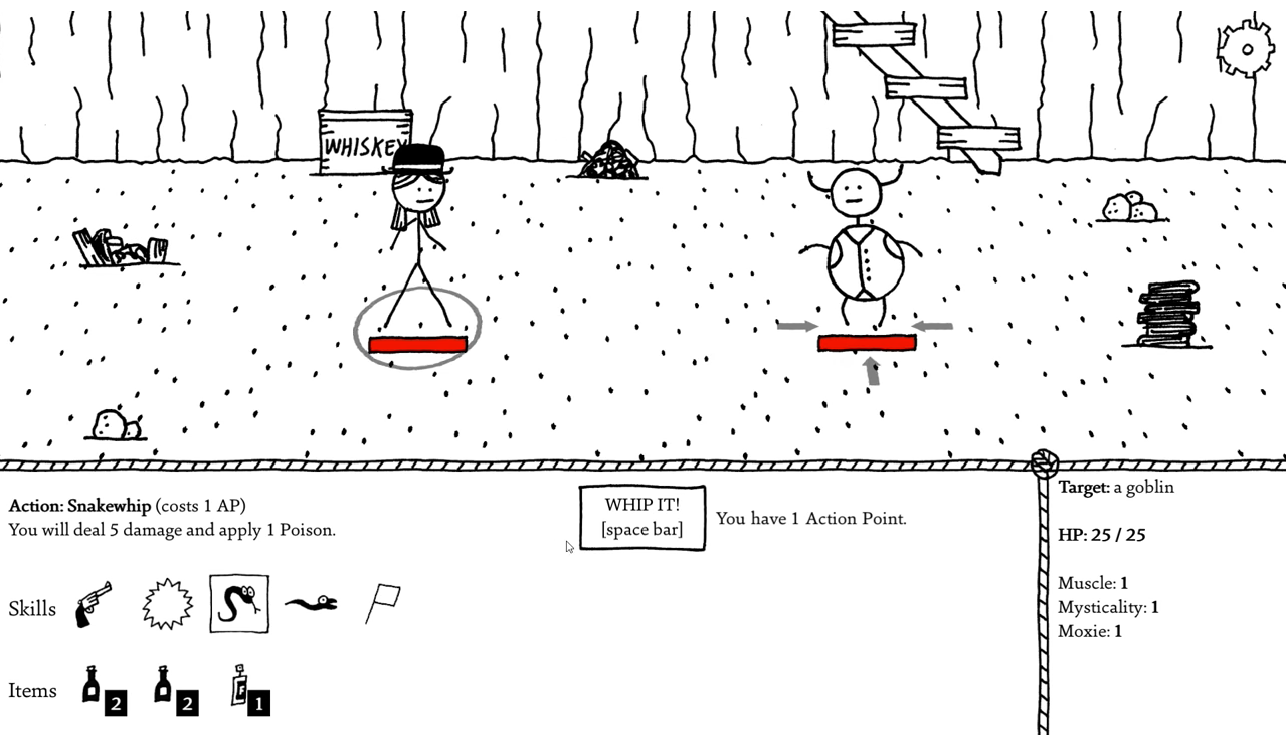 Stepping beyond the game’s amusingly surreal façade, we encounter the gameplay as West of Loathing ludifies the ambivalences at the heart of contemporary popular cultural understandings of: the American West as an early workshop for the expansion of its empire; and the Western as the oft-narrated imaginary of a simpler, purer colonial past. Indeed, the outcome of the ‘weirding’ in this comic, alternate-history game is a parodied revitalisation of the frontier narrative as a politically ambivalent spatial imaginary. Yet subversive as it might initially seem, West of Loathing troubles, but rarely collapses, the well-established binaries of colony-empire, savagery-civilization, and colonial-national. In this respect, the game is similar to classic games as Oregon Trail (1971) and Gun (2005), as well as globally successful hits like Red Dead Redemption (2010) and Red Dead Redemption II (2018). Rather than dismantling entrenched binaries, what the game does best is underscore the Western’s ambivalences as a genre. While it may not directly question the colonial intentions behind the Westward Movement, it does challenge the popular image of what that colonisation project constitutes and to what end.

Avoiding an over-reading of the game’s political undertones, it is still evident that the game takes an ambivalent stance toward the bygone Wild West of imagination—at once parodying the mythical wilderness and highlighting its weirdness. To conclude, in digital games such as West of Loathing, the mythical American West becomes alive, making room for unprecedented interactions, weird encounters, and subversive scenarios. And while interactively exploring this historical proxy for the US empire prior to the adjustment of its borders from ‘national’ to ‘global’ in the twentieth century, players are asked to both interrogate this American myth and—quite literally—tasked to play along with and reinforce it.

[1] David Hamilton Murdoch, The American West: The Invention of a Myth. Reno: Nevada UP, 106.

War Among All Puerto Ricans: The Nationalist Revolt and the Creation of the Estado Libre Asociado of...
US History as Myth-Busting
“There wouldn’t be an America if it wasn’t for black people": Programme Review of the University of ...
Zora Neale Hurston: Life and Works
Women's Emancipation in Mohja Kahf's 'Emails from Scheherazad' (2003)
American Women Writers and Wars on Foreign Soil—Part One
American Studies in Europe: Interview with Gözde Erdoğan, Hacettepe University, Ankara
Creating Model Americans: The Mississippi Choctaw Billie Family and Relocation

Author of Citizens and Rulers of the World: The American Child and the Cartographic Pedagogies of Empire (forthcoming with the University of North Carolina Press), Mahshid Mayar is an assistant professor of American Studies at Bielefeld University, Germany. In her current research, Mahshid interrogates the politics and poetics of silence and silencing in a book project that attends to the political, the historical, and the aesthetic in contemporary US erasure poetry. Her research and teaching interests lie in protest poetry, new empire studies, historical childhood studies, C19 US history, and critical game studies. Mahshid has held fellowships at the University of Georgetown, Washington, D.C., and at Amherst College, Massachusetts.
View all posts by Mahshid Mayar →
Tagged  American Studies, Gun, Minimalism, Red Dead Redemption, Video Games, Weird Westerns, West of Loathing, Western.
Bookmark the permalink.