Reverberations of Trumpism in Far Cry 5

Politics and contexts of publication are two interesting focalisers when examining video games from an American Studies perspective. While not all video games are overtly political, many have explicit political agendas. These run the gamut from tactical shooters such as America’s Army (United States Army, 2002), which has served as a recruitment tool for U.S. armed forces; to serious games like the satirical business simulation McDonald’s Video Game (Molleindustria, 2006), which highlights unethical business practices sustaining globally operating fast food chains; to extremist propaganda such as Ethnic Cleansing (National Alliance, 2002), a racist first-person shooter developed by white supremacists. But even video games that do not explicitly promote particular agendas often have an implicit political dimension in the values, assumptions, and logics embedded in them. Critical game studies scholars have for some time now demonstrated how video games (re)produce particular ideas about race, gender, sexuality, capitalism, colonialism, and many other issues, thus resulting in gamic politics that often remain more implicit than the previous examples. Works like Nick Dyer-Witheford and Greig de Peuter’s Games of Empire: Global Capitalism and Video Games, Soraya Murray’s On Video Games: The Visual Politics of Race, Gender and Space, and Jennifer Malkowski and TreaAndrea M. Russworm’s edited volume Gaming Representation: Race, Gender, and Sexuality in Video Games are only three of many excellent examples of this kind of critical research into the politics of video games.

Besides such politics of their own, video games have also repeatedly had to deal with unforeseen events that potentially impact the reception of a game’s content at the time of its release. A prime example is the 9/11 terrorist attack on the World Trade Center in New York City in 2001. Responding to the ongoing mourning and trauma, a number of video games scheduled for release shortly after the attack handled this sensitive issue by changing or removing scenes that involved or were reminiscent of the Twin Towers. Many popular releases—including Spider-Man 2: Enter Electro (Activision, 2001), Metal Gear Solid 2: Sons of Liberty (Konami, 2001), and even the otherwise controversy-prone Grand Theft Auto III (Rockstar Games, 2001)—responded in this manner, demonstrating that in both political implications and societal contexts video games can never elude the salient issues of the world they enter.

An interesting case in point here is the open-world shooter Far Cry 5 (Ubisoft, 2018). Drawing its inspiration from rural American militia culture and events like the 2014 and 2016 Bundy stand-offs in Nevada and Oregon, the game revolves around the resistance to and expulsion of Eden’s Gate, a fundamentalist, heavily armed, religious cult that has taken control over fictional Hope County, Montana. Taking on the role of law enforcement sent to end the cult’s activities, the player’s task is to defeat the cult in all areas of the county and thus reinstate law and order. While the setup of the game follows expected genre conventions of the first-person shooter, Far Cry 5 stands out for two reasons. First, whereas previous titles in the series were set in exotic locales far removed from the United States, Far Cry 5 brings the action ‘home,’ into the American heartland. Second, the timing of its development and release coincided with the election of Donald Trump as president. Both aspects converge in the curious ways through which the politics of Trumpism reverberate in Far Cry 5, even though the game was conceived before Trump’s election and its creators deny any intention of making political statements. 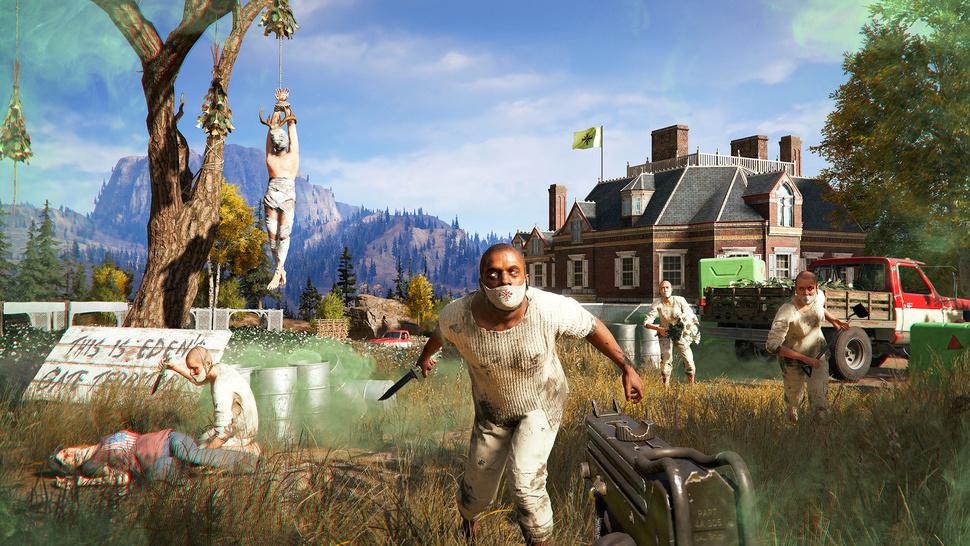 Far Cry 5’s narrative premise, for instance, corresponds with some of the underlying sentiments of Trumpism. The central motivation in the game is the same as one of the cornerstones of Trump’s rhetoric and appeal to his voter base: the feeling that one’s home and way of life are being taken away by strangers. Both the characters threatened by Eden’s Gate and the locations players take back from the cult in Far Cry 5 are recognisable types that exude a stereotypical ‘Americanness’, invoking established images of white working-class America and a sense of community now endangered by outsiders. It is not much of a leap from this narrative setup to the ‘forgotten people’ frequently evoked in Trump’s early speeches. These (mainly white) Americans from deindustrialised and rural areas of the United States, so the story goes, had begun to view themselves as ‘strangers in their own land’ in the wake of societal changes of the second half of the twentieth century. Eventually, so it goes, they turned to Trump, who “was the hope and change candidate in 2016, as Obama had been in 2008, albeit representing different constituencies,” Harris Beider, Stacy Harwood, and Kusmidner Chahal explain in “The Other America”: White Working-Class Views on Belonging, Change, Identity, and Immigration. 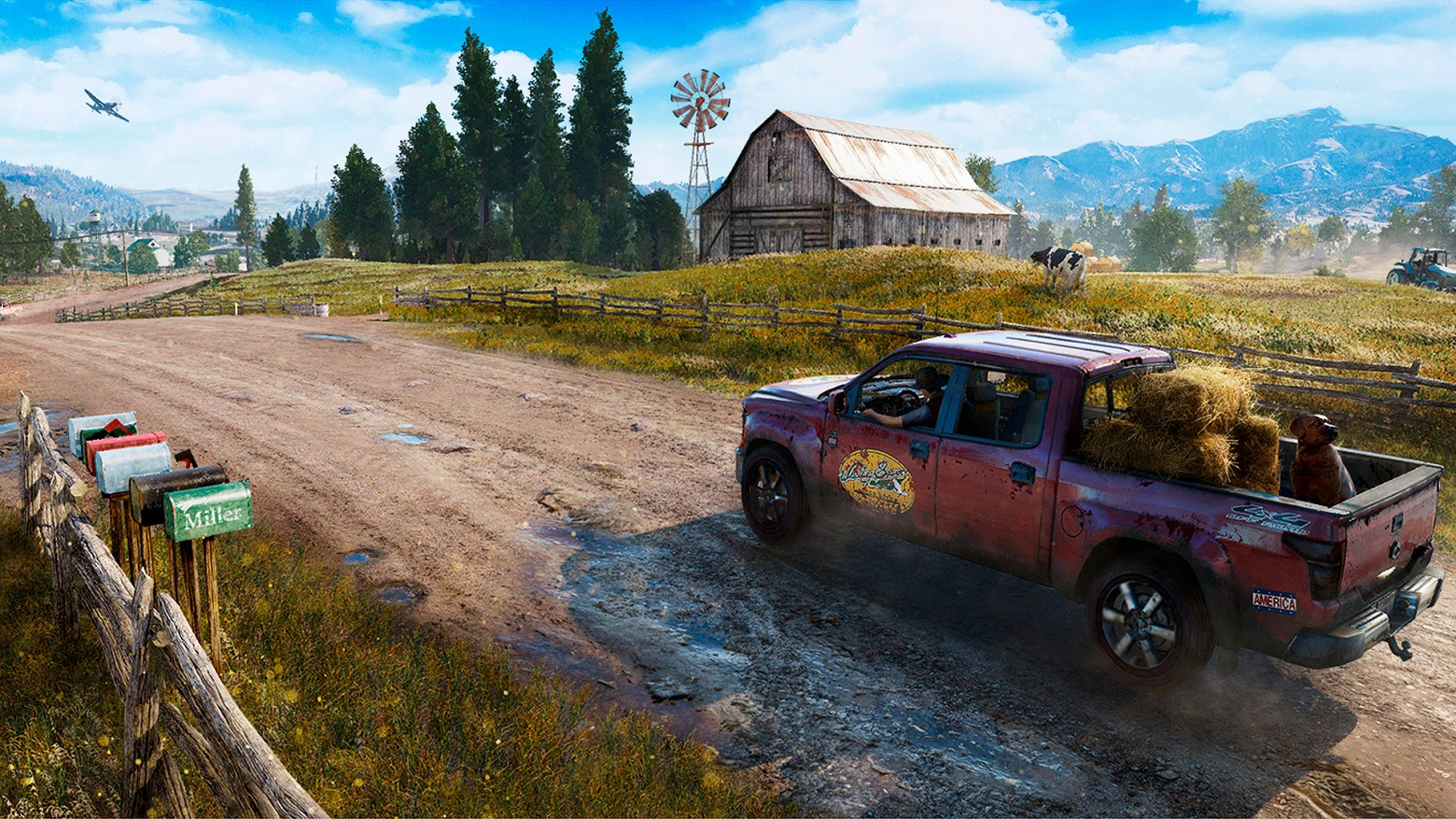 In a similar manner, the central logic of Far Cry 5, taking back Hope County from the cult, essentially amounts to a reinstating of a count(r)y that once was. The cut-scenes that follow each liberation of a cult outpost show people collectively working to erase the relics of Eden’s Gate and restore each business to its previous state, with some of the people wearing Stars-and-Stripes attire, repeatedly highlighting community and collective self-reliance. This “retrotopian romance with the past,” as Zygmunt Bauman has called it, resembles the reactionary politics characteristic of the Trump administration, which have predominately aimed at retracting more progressive policies of the Obama era. After all, Trump’s slogan is ‘Make America Great Again,’ a directive oriented toward an idealised and largely imagined past, which encapsulates an attempt to re-establish an ‘America’ believed to have once existed.

All of this is not to say that Far Cry 5 actively advocates or endorses Trumpism—players are, after all, expelling an evil cult in this game, which certainly does not pursue an agenda the way America’s Army has done. Nonetheless all cultural productions bear responsibility for the images and ideas they evoke, as the developers of Grand Theft Auto III and other titles well understood in the wake of 9/11. The example of Far Cry 5 shows how real-world political rhetoric can find parallels in virtual environments, in this case the ludonarrative design of a video game. As one resonates in the other, Far Cry 5 demands to be interpreted in light of the political context of its release, just as the phenomenon of Trumpism cannot be understood without the myriad products of popular culture which, often unintentionally, operate on logics quite similar to the rhetoric and politics of the current U.S. administration.

A Woman’s Place is in the Resistance
'Urban Comix’: Collaboration, Reconstruction and Resistance in the Divided City
Review: Pursuing the Rooseveltian Century
In Memory of E.L. Doctorow (1931-2015)
Listening to Rosa Parks
Review: ‘Collaboration in America and Collaborative Work in American Studies’
Conference Review: 'Supposedly Fun Things: A Colloquium on the Writing of David Foster Wallace’
Songs about Rebels: The American Civil War in modern country music