If you’d like to join us for this  #USSOBookhour talk with Professor Robert T. Tally Jr. on zoom, which lasts for about one hour, please register in advance for this meeting through the link below (click on it):

After registering, you will soon receive a confirmation email containing information about joining the meeting. Please mark your calendar and save the date and time for our event. 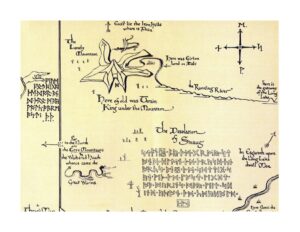 “I wisely started with a map”:

We are thrilled to announce that we will be launching our second #USSOBOOKHOUR at 3 pm, 21 October 2020 with the leading space researcher, critic, and theorist Professor Robert T. Tally Jr..

J. R. R. Tolkien is best known for his epic fantasy novels, The Hobbit and The Lord of the Rings, and part of what has made these stories so compelling for readers around the globe is the striking detail and coherence of the world in which they take place. Tolkien actually began mapping out that imaginary territory much earlier, as he developed the corpus of interrelated tales that would become The Silmarillion, an incomplete work published posthumously. Maps, both real and imagined, figure prominently throughout Tolkien’s work, and not merely for illustrative purposes. In The Hobbit, for instance, the discovery of Thrór’s Map is the impetus for the adventure, and Tom Shippey has observed that The Lord of the Rings comprises a “cartographic plot.” Tolkien himself mentioned that, in writing that novel, “I wisely started with a map, and made the story fit.” 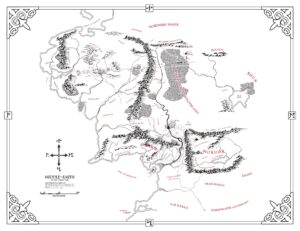 In this talk, Robert T. Tally Jr. will briefly discuss his Topophrenia: Place, Narrative, and the Spatial Imagination (2019) before elaborating upon Tolkien’s literary cartography in the making of Middle-earth, and he will argue for the critical importance of fantasy in shaping the sense of our own world today.

This talk will inspire researchers who are interested in Tolkien, fantasy, geocritcism, literary geography, and spatial humanities. Questions from our audience will be addressed in the Q&A session. 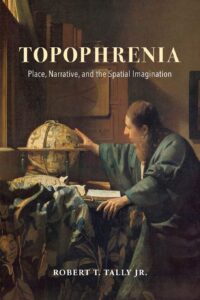 What is our place in the world, and how do we inhabit, understand, and represent this place to others? Topophrenia gathers essays by Robert Tally that explore the relationship between space, place, and mapping, on the one hand, and literary criticism, history, and theory on the other. The book provides an introduction to spatial literary studies, exploring in detail the theory and practice of geocriticism, literary cartography, and the spatial humanities more generally. The spatial anxiety of disorientation and the need to know one’s location, even if only subconsciously, is a deeply felt and shared human experience. Building on Yi Fu Tuan’s “topophilia” (or love of place), Tally instead considers the notion of “topophrenia” as a simultaneous sense of place-consciousness coupled with a feeling of disorder, anxiety, and “dis-ease.” He argues that no effective geography could be complete without also incorporating an awareness of the lonely, loathsome, or frightening spaces that condition our understanding of that space. Tally considers the tension between the objective ordering of a space and the subjective ways in which narrative worlds are constructed. Narrative maps present a way of understanding that seems realistic but is completely figurative. So how can these maps be used to not only understand the real world but also to put up an alternative vision of what that world might otherwise be? From Tolkien to Cervantes, Borges to More, Topophrenia provides a clear and compelling explanation of how geocriticism, the spatial humanities, and literary cartography help us to narrate, represent, and understand our place in a constantly changing world.

“With Topophrenia Robert Tally discerns, first, how literature invents and produces space, and second, what the creative imagination does with space. These become the ground of a critical praxis addressing the conditions of the world in which we live. Blending close analysis with dialectics, Tally’s book is a compelling study of the complex relations of literature and geography.”

Author of An Errant Eye: Poetry and Topography in Early Modern France

“Tally writes tersely and elegantly of the Odyssey, The Divine Comedy, of Moby-Dick (notably ‘The Chart’ sequence), Ulysses, Tolkein’s ‘middle worlds,’ and, soon after, Thomas More and of the relation of utopia to fantasy and science fiction. If space belongs to the form and purpose of the novel, it also applies to Topophrenia in general. … Ambitious in scope, the strength of Topophrenia is found in how it makes its case.” 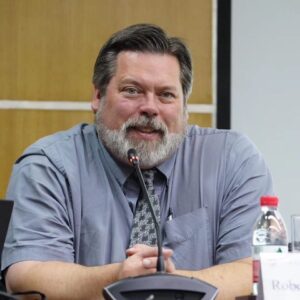 Dr. Robert T. Tally Jr. is the NEH Distinguished Teaching Professor in the Humanities and Professor of English at Texas State University. He is the author of numerous books, including Topophrenia: Place, Narrative, and the Spatial Imagination (2019), Fredric Jameson: The Project of Dialectical Criticism (2014), Poe and the Subversion of American Literature (2014) Utopia in the Age of Globalization (2013), Spatiality (2013), Kurt Vonnegut and the American Novel (2011), and Melville, Mapping, and Globalization (2009). His edited collections include Spatial Literary Studies (2020), Teaching Space, Place, and Literature (2018), The Routledge Handbook of Literature and Space (2017), Ecocriticism and Geocriticism (2016), The Geocritical Legacies of Edward W. Said (2015), Literary Cartographies (2014), Kurt Vonnegut: Critical Insights (2012), and Geocritical Explorations (2011). Tally is the general editor of “Geocriticism and Spatial Literary Studies,” a Palgrave Macmillan book series.

We look forward to seeing you there!