‘Urban Comix’: Collaboration, Reconstruction and Resistance in the Divided City

‘Urban Comix’: Collaboration, Reconstruction and Resistance in the Divided City

On Sunday 25th October 2015, commuters passing through downtown Cairo’s Ramses Martyrs and Shohadaa metro station discovered large, sequential images plastered to the walls of the platforms. Blown up so that they ran almost ceiling to floor, these graphic interventions in urban space began to receive a great deal of attention from Cairenes waiting for their next train. The comic tackled a pervasive form of urban violence experienced by many women living and travelling in Cairo. The UN records that a 99.3% of women in Egypt are victims of sexual harassment and, perhaps unsurprisingly, 91% of Egyptian women feel unsafe in the streets of the city. In response to these astonishing statistics, activists Peter Wahid, Nahla Aziz and Amr Ayman came up with the idea for a comic, and produced it in collaboration with ‘Imprint Movement’, an NGO who describe themselves as ‘a voluntary social movement that strives for radically changing all that distorts the society of ignorance’. The images were drawn and printed by art director and illustrator Ahmed Nady, whose work often tackles social and political issues. The comics migrated around the city, appearing for short periods on the platforms and walkways of different metro stations, in an effort to combat the epidemic of sexual harassment against women in the city.

Crucially, what I want to pick up on here is the fact that Nady not only chooses to draw comics about urban space. Just as importantly he draws them in the urban space itself, before then having the comics appear as physical objects that circulate through and alter Cairo’s urban fabric. During the occupation of Tahrir Square in January and February 2011, he sat in the street, amongst the protestors, drawing large caricatures of the several corrupt politicians that the revolution criticised. These drawings were used by marching protestors as placards, serving as visual accompaniments that quite literally moved through the city. In so doing, Nady’s drawings did two things simultaneously: they both encapsulated and reinforced the political messages of the revolution, whilst changing the very look of the urban space in which these contests were taking place, and thereby politicising it. Indeed, Nady writes that he prefers his ‘cartoons to be used as banners in protests than to be published in newspapers’. His work is indicative of the fact that comics provide a way not only to represent urban violence, especially as it occurs in cities with long histories of division and segregation, or with populations facing different and often violent forms of cultural censorship and political oppression (and the two are often connected). It also shows how comics can also actively intervene, or impinge, on the infrastructures of which the city is made up – the street, the wall, the security fence, the pavement, the overpass – and alter the violent effects they might otherwise exacerbate. 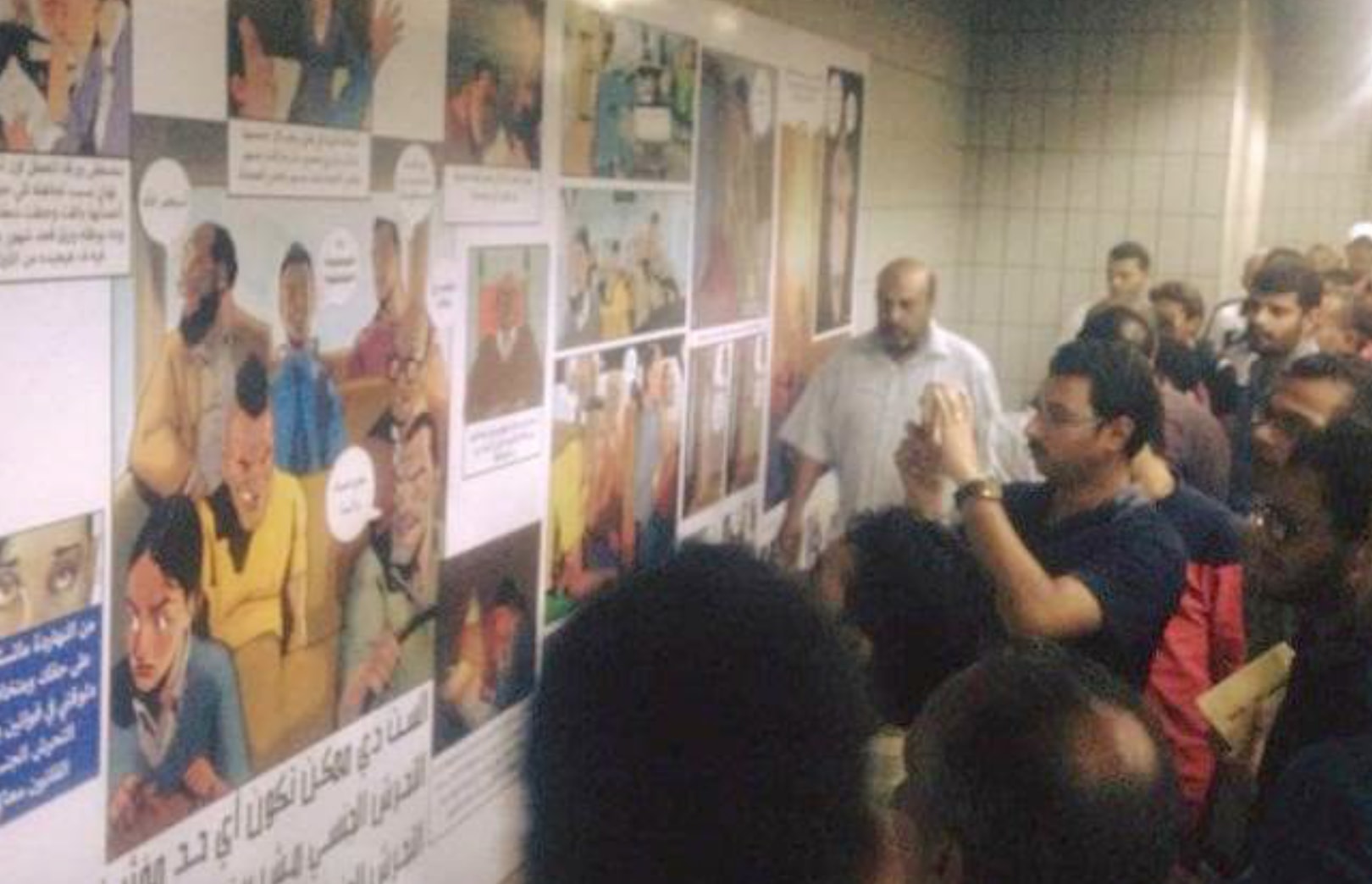 Comix on the Cairo metro join in the conversation on harassment, women’s rights and gendered violence in Egypt

It is pertinent to ask: how is violence embedded in the physical infrastructure of the city? In his rewriting of Manuel Castell’s The Urban Question: A Marxist Approach (1977), social commentator and critic Andy Merrifield has identified what he believes to be ‘the New Urban Question’, and some of his talks on the subject can be viewed here. As Merrifield points out, cities all over the world are becoming increasingly marked by a kind of ‘spatial apartheid’; proximal spatial inequalities and segregations are becoming a defining feature of the globe’s urban spaces more than ever before. Patterns of unequal development are resulting in increasingly divided, and thus violent, cities. Many of these divisions have long histories: Cape Town is still marked by the segregationist infrastructure of apartheid, whilst cities such as Beirut remain divided, psychologically if not physically (though often both), by ongoing sectarian and ethnic conflicts. Other cities are becoming increasingly dominated by new security infrastructures that attempt to conceal, as in the case of Delhi, the slum-dweller from the super-rich, or, as in Rio, to prevent the violence of the favelas from spilling over into the luxury condos and skyscrapers of the wealthy business district.

However, Merrifield argues that though twenty-first-century cities are increasingly marked by these divisions, these proximities force their inhabitants to confront this violence and inequality, and allow previously isolated segments of the urban population to come into contact with one another. On occasion, it can lead them to collaborate in order to create more socially just, or equal, urban spaces. Comics as a form is particularly adept at representing urban space: its visual-narrative medium, which allows it to depict the city’s multi-dimensional spaces, whilst also narrating a plot, or alternative route, through space, allows for a critical response to – and a re-imagining of – the divided city. But it is not only that the comics form is particularly suited to the representation of the increasingly complex spatial layouts of urban space. It is also that the processes of the form’s production – in both physical and online formats – are often collaborative and self-consciously sub-cultural and political, and thus the creative process itself leads to the development of alternative networks of communication, cultural exchange and social interaction. Comics can change the shape of violent cities, either imaginatively or by creating new social networks of communication and cultural exchange, healing historical divisions and transgressing more recent segregationist developments. It is because of these two features that I prefer to collect these movements under the term ‘urban comix’: ‘urban’, because the defining feature of urbanity is interaction between heterogeneous communities, chance encounters that give rise to new ways of thinking, communicating and living, and ‘comix’, because the term signifies a history of underground collaboration and subversive sociopolitical content with which comics have long been associated. 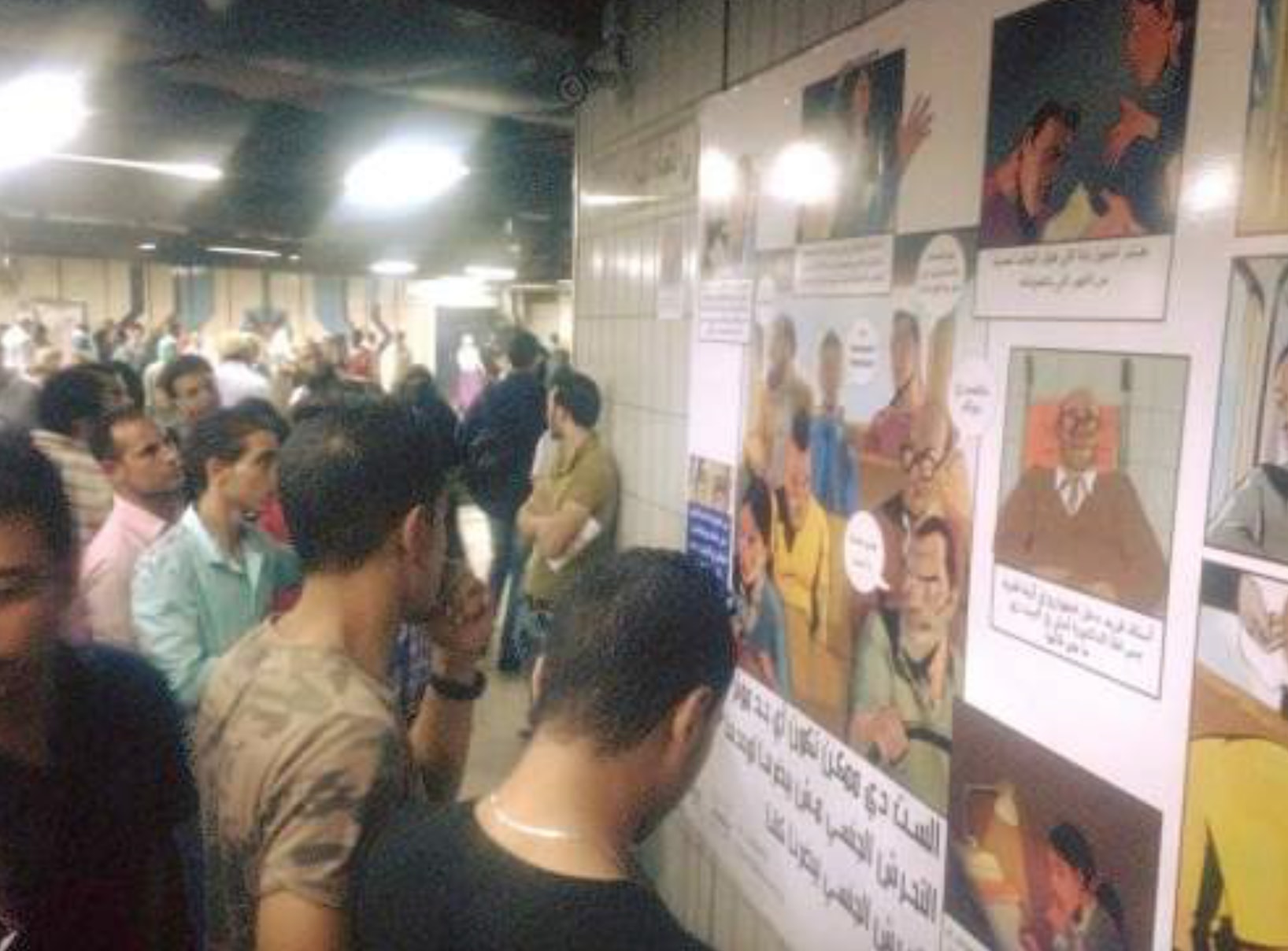 Nady’s comic in the metro stations of Cairo is a key example of the kinds of urban affinities that depict urban problems whilst actively intervening in, and altering, physical urban space, in order to construct a more democratic city. Similar efforts have arisen in the cities mentioned above in recent years: consider André and Nathan Trantraal’s serial comic, Crossroads, which links resistance to apartheid segregation in Cape Town to contemporary protests against discriminative housing; the work of the Pao Collective in Delhi, members of which use graphic depictions of historic periods of state censorship to comment on anti-democratic policies in the urban present; André Diniz’s Picture a Favela, which shows how crime in Rio’s impoverished neighbourhoods is in part the fault of oppressive urban governance; or the comics collective Samandal in Beirut, who were recently persecuted by the Lebanese state for their criticisms of sectarian division. By not only depicting urban life, but also physically inserting these representations into the urban environment, these comix artists and collectives actively alter, if not reshape, the planned environment, subverting the segregationist infrastructural coordinates of top-down urban planning. They draw attention to behavioural habits and discriminations in order to change them, making their cities more hospitable for its marginalised populations—in Nady’s case, the women of Cairo. We might even argue, to use the words of renowned urban theorist, Henri Lefebvre, that these comix movements actually help marginalised populations to realise their ‘right to the city’, to reclaim a more democratic and socially just kind of urban space that recognises the violent discriminations embedded within contemporary cities in order to rebalance, if not reverse, them.

(In)Visibility, Race and Ethnicity in American Women's Writing throughout the Twentieth Century
Fear is a Virus: Xenophobia in Mostafa Keshvari’s Corona (2020)
American Studies in Europe: Interview with Angela Santese, University of Bologna
To Protect the Innocent: Does Comic Book Censorship to Prevent Youth Corruption Make Sense?
Obama’s West Point Vision: Or, How to Retreat from Military Intervention and Democracy Promotion
Nantucket as a Summer Holiday Destination
The legacy of Black Power Visual Culture in 1990s Hip Hop
Beyond the Refrigerator: Superheroines and Sexual Trauma as Disability

Dominic Davies is a British Academy Postdoctoral Fellow at the English Faculty, University of Oxford, where he also completed his DPhil in March 2015. He has written and published a number of articles in journals such as the Journal of Commonwealth Literature and the Journal of Postcolonial Writing.
View all posts by Dominic Davies →
Tagged  Comics, Gender and Sexuality, urban, Violence.
Bookmark the permalink.