Review: Borders vs. Bridges: Nationalism and Transnationalism in the Americas

Borders vs. Bridges: Nationalism and Transnationalism in the Americas, UCL Americas Research Network, UCL, 11-12 May 2017

Centred on the contentious—and arguably diametrically opposed—concepts of borders and bridges, this two-day conference brought together forty-eight postgraduate and early career researchers from Europe, Asia and the Americas. The sixteen thematically organised panels offered a range of interdisciplinary insights into some of the Americas’ most thought-provoking and prescient issues, from social movements to gender and transnationalism. National identity and transnational relations remained the presiding theme of the event, yet the broad scope of panels attracted scholars from a diverse range of disciplines; interweaving historical, ethnographic, literary and sociological approaches into a holistic Pan-American perspective.

The first two panels perfectly introduced the overarching theme of the conference, encouraging the audience to consider migration metaphorically as both inclusive bridge and divisive border between nations and cultures. In the panel on ‘Migration and the Nation State’, two papers on Latin America (Celine McGarvey from UCL and Marcos Estrada from University of Warwick) and two on the US (Qianqian Li from University of Marburg, Germany, and Hasnul Djohar from University of Exeter) discussed themes of national identity and belonging with regards to migrant communities in a variety of contexts, ranging from food and transnational identity to regional and international migration policy. These papers spoke to the multifaceted nature of migrant national identities, highlighting interesting parallels among disparate communities.

The parallel panel on the ‘Latin American Diaspora in the UK’ allowed for a closely focused approach; examining how Latin Americans, not only in London but across the whole of Britain, negotiate their socio-cultural invisibility. The adoption of an overarching Latin American identity before that of a national one emerged from Nicola Astudillo-Jones’ (University of Manchester) research on the Viva! film festival in Manchester. This was echoed by Marta Sokol-Klepacka (University of Saint Andrews) in her paper on Latin Americans in Edinburgh, and was implicit in the more historical perspective on the London community of Latin American women offered by Juany Murphy (Oxford Brookes University). Rather than a pan-Latin American form of transnationalism, Yvonne Green’s (UCL) ethnographic case study of a Dominican hair salon in Brixton painted an evocative picture of the role that these spaces play in maintaining a sense of community and common identity amongst Dominican migrant women. The panel was expertly chaired by Cathy McIlwaine (Queen Mary’s, London), and proved a perfect preamble to her keynote later that day on ‘Transnational Paradoxes of Visibility.’ Tying her presentation neatly into the conference’s theme, McIlwaine painted a detailed picture of the Latin American community in London, addressing the conflicting issues of the (in)visibility of migrants. Her keynote concluded by stressing the importance of building transnational bridges across borders. 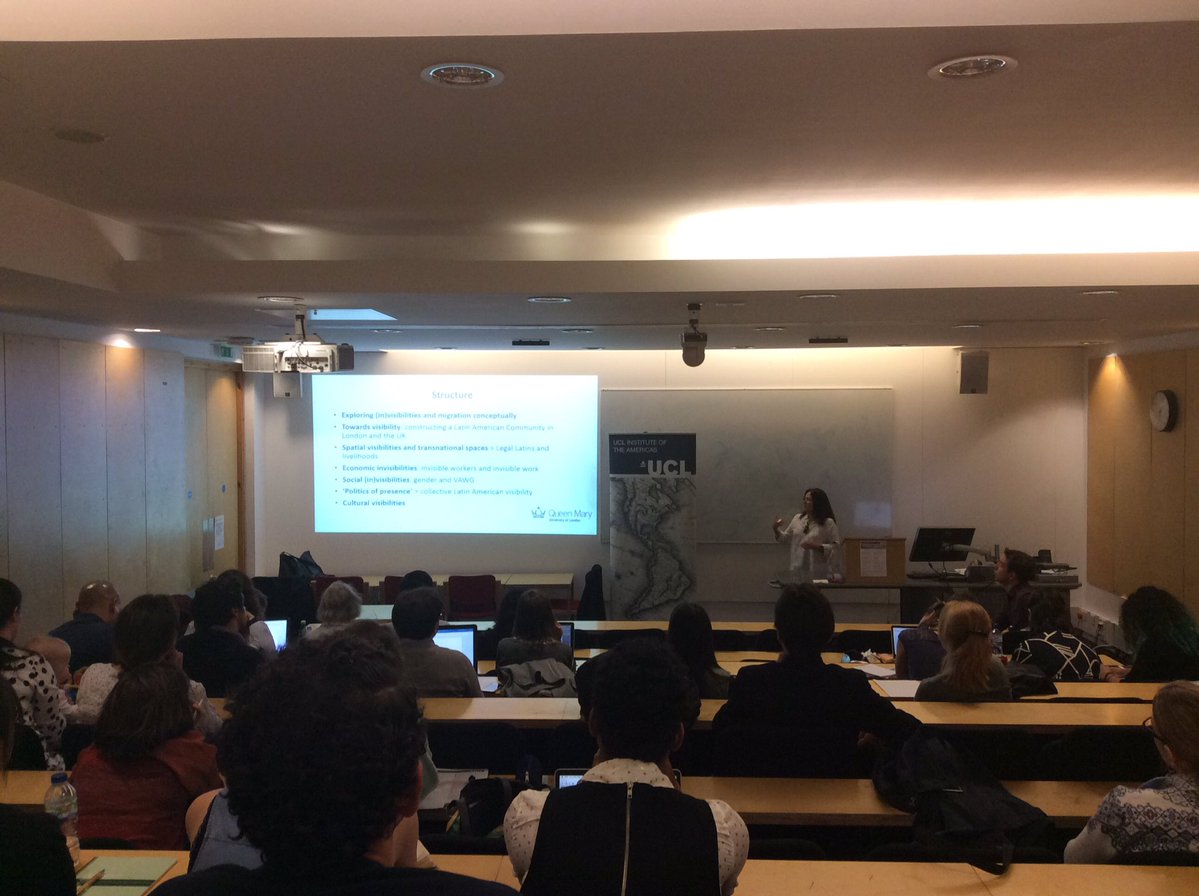 Transnationalism was combined with an interrogation of gender in the panel on ‘International Solidarity’, which placed craftwork and artistic endeavour at the heart of transnational resistance among Latin American women during the dictatorship eras, particularly in Chile. Arpilleras, which formed the crux of Elsie Doolan’s (UCL) presentation, are artworks born of collective labour that embody a spirit of solidarity between their producers. In a material sense, the sale of the arpilleras also financially assisted women’s groups and trade unions during the period of repression. Questions from the audience touched upon the degree to which the sale of arpilleras represented a form of commodification. Given that arpilleras were a craft subsequently adopted by women in Europe, the issue of cultural appropriation also emerged in discussion.

Similarly, gender issues were broached further in the panel discussing feminist movements in Latin America as well as a panel on ‘Masculinities’ in which Eugenie Maria Theuer (University of Barcelona/Vienna) and Ranthild Salzer (University of Vienna) examined representations of masculinity in US popular culture. Framed by the myth of the American self-made man, the image of ‘the fraud’ and masculinity in crisis were discussed with reference to three contemporary US television shows: Breaking Bad (2008-2013), Mad Men (2007-2015), and Suits (2011- ). The issue of masculinity in crisis was also present in Salzer’s paper on popular superheroes such as Batman and Superman. It examined the use of racial stereotypes and angst-ridden, unsure men as protagonists in popular comic books, especially in 1960s US society and emerging civil rights and feminist movements. A lively discussion following the presentations brought up the historical evolution of traditionally male characters and representations of race in popular culture. 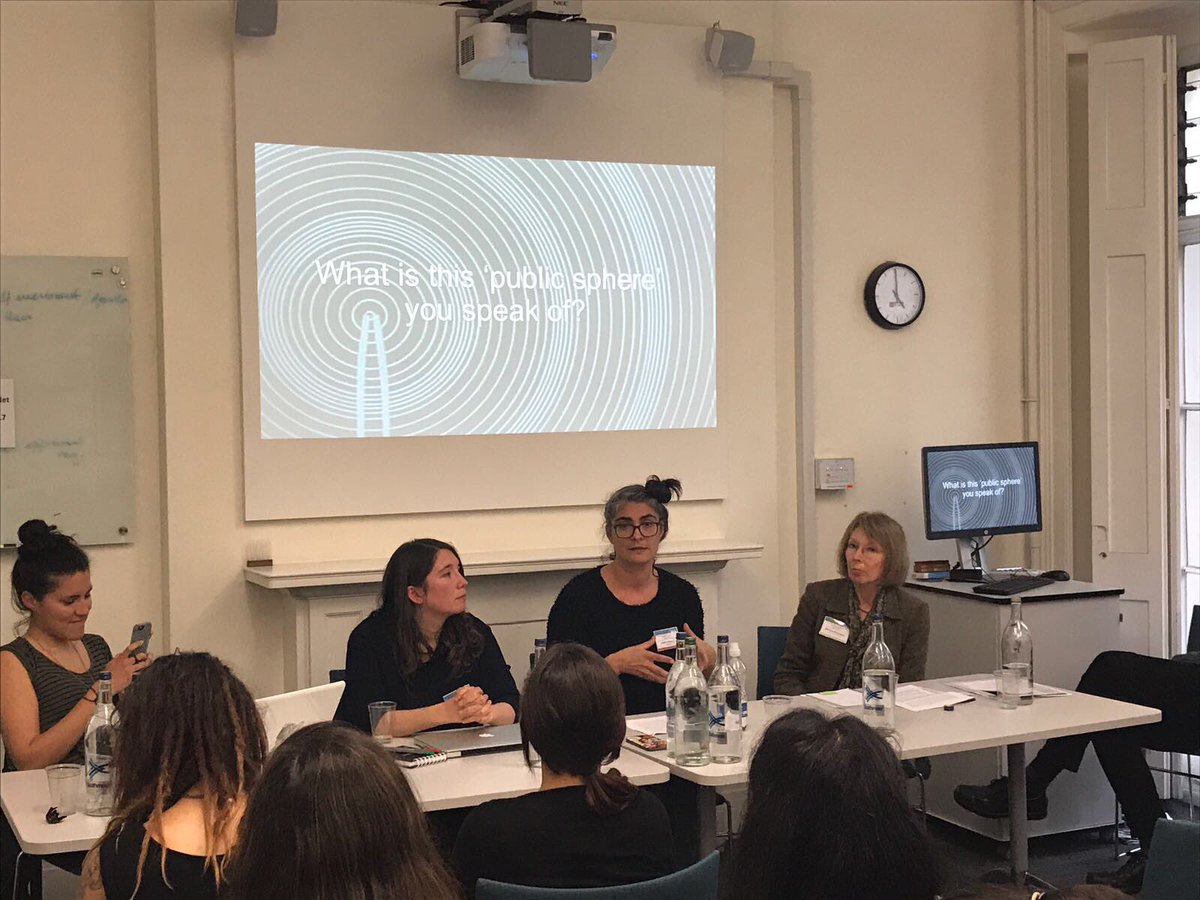 Bringing together themes of gender issues and social movements, the panel entitled ‘Women Mobilising’ offered three distinct perspectives from Chile (Lieta Vivaldi, Goldsmiths), Peru (Andrea García Abad, Goldsmiths) and Uruguay (Helena Suárez, Goldsmiths). These interrogations covered a broad range of problems facing women across Latin America, from abortion and pro-life activism to issues of race and domestic workers. In her paper on feminist radio in Uruguay, Suárez criticised the ‘undulated smoothness’ of the Uruguayan public sphere, which conceals unspoken conflicts, and illustrated the diverse ways in which women attempt to create a feminist counter-public through activism. Interrogating social movements from the opposite end of the political spectrum, Ben Cowan (George Mason University) considered Brazilian conservative Catholicism in the 1980s in the panel on ‘The New Right’. This talk probed the intriguing dynamics of ‘renegade Catholicism’ practiced by a cohort of extreme-right Catholic conservatives. The talk lucidly argued for the primacy of ‘magic’ and the supernatural within a far-right political programme which included anti-communism, pro-neoliberal and pro-hierarchy ideologies. In the subsequent discussion, the gender and class dimensions of the movement were explored, exposing the enduring power of patriarchal masculinities in the Brazilian Catholic right.

The focus was once again on activism in Latin America in the ‘Neoliberalism and Social Movements’ panel. The session’s approach to these issues, within the context of resource extraction, was an interdisciplinary one, bringing together an ecologist, an historian and a lawyer to talk about peasant community and conservation discourses in Mexico (María Gabriela González-Cruz, UCL), the indigenous Katarista movement in Bolivia (Olivia Arigho-Stiles, UCL), and issues of water governance in Chile (Roberto Burgos Pinto, King’s College London). The debate afterwards was animated, with the question over the meaning of neoliberalism and its continued relevance today leading many delegates to intervene.

Pan-American parallels were drawn in the ‘Policing and Criminalisation’ panel which looked at questions of citizenship and human rights through the lens of policing and peace in Brazil, the United States, and Colombia. The presentations on the favela pacification policy (Christoffer Guldberg, King’s College London), the Black Lives Matter movement and its rise to a global phenomenon (Arushka Theagarajah, UCL), and struggles that rural farmers face in Colombia’s quest for peace (Caroline Delgado, University of Manchester), gave way to a lively and informed discussion, ending on the following provoking question: should the police be abolished? While all panellists shed light on the problematic nature of policing in their respective case studies, none of them were entirely comfortable giving a response in the affirmative: for want of a suitable alternative, it seemed that abolishing the police was not considered a solution. 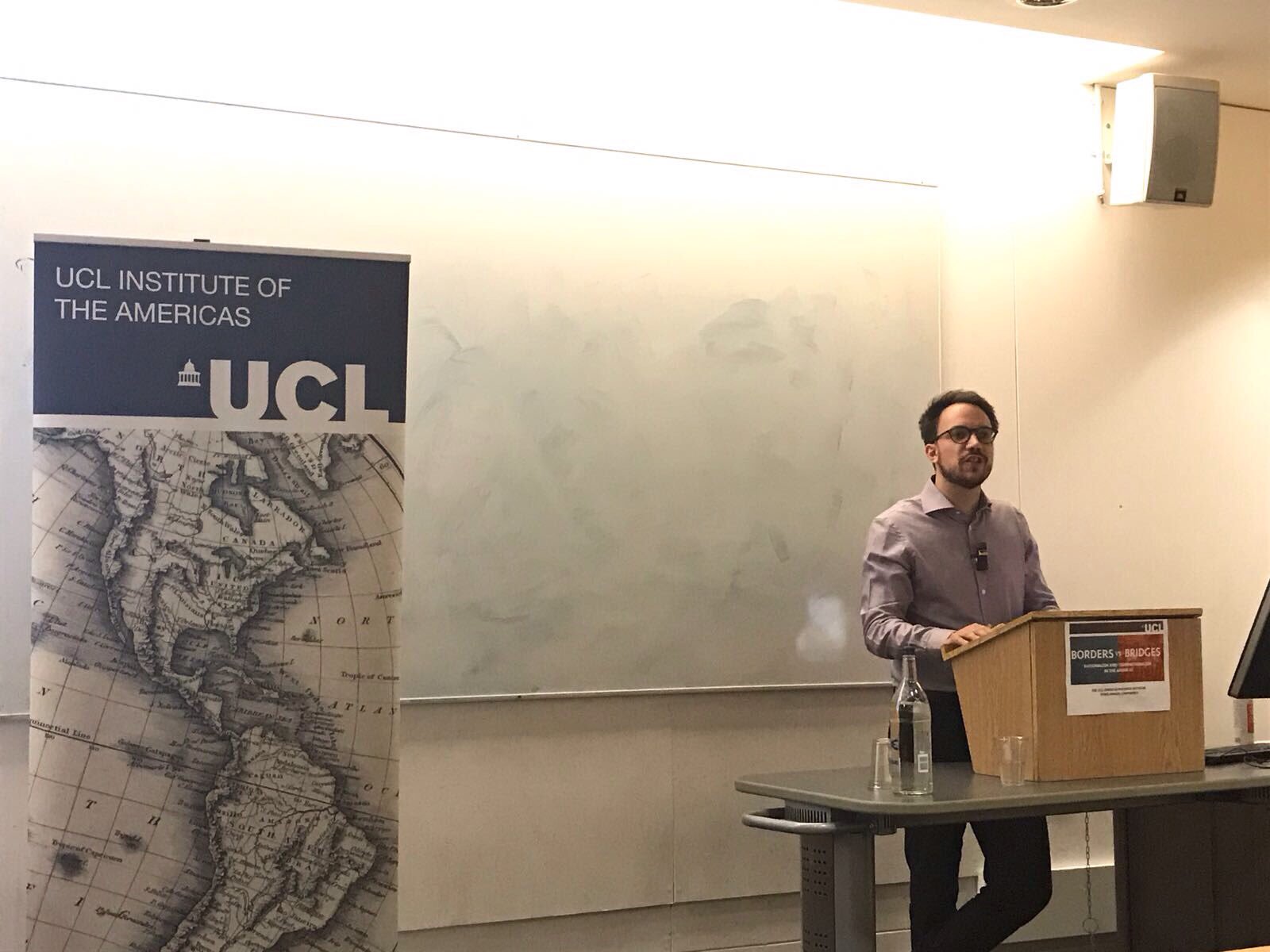 The conference’s final keynote was delivered by Nick Witham (UCL), who explored transnational protest from 1898 until the present day in the United States, tying together the themes of social and protest movements present throughout the conference. The focus was predominantly on black internationalism, echoing much of the discussion from the day’s previous panel on protest movements and race. Witham pointed out that black internationalism in the Cold War was not anti-war in the traditional sense of seeking to protect US troops from overseas harm; rather, activists made explicit connections with civil rights movements across the world. Witham’s talk revealed debates around race and citizenship to be profoundly important in anti-war activism in the US and served as a fitting end to the two days. As in previous years, the UCL Research Network conference brought together scholars from an array of disciplines and perspectives for two days of highly enriching debate and discussion. In the era of Trump’s proposed wall against Mexico and Hard Brexit in the UK, the theme of Borders vs. Bridges has never felt so universally pertinent.

Constance Malleret is completing an MSc in Globalisation and Latin American Development at the UCL Institute of the Americas. Her current research focuses on sustainable development, environmental social movements, and urban perspectives of eco-citizenship in Brazil.
View all posts by Constance Malleret →
Tagged  Community, Diaspora, Latin America, Nationalism, Politics, Transnationalism.
Bookmark the permalink.