This paper argues that by re-thinking ideas of how journalists decide what is and is not news through an intersectional lens, scholars will be better placed to evaluate journalism’s ability to accurately represent the communities it covers and serves, using US-based broadcast journalism as an example. Recent research indicates that American television newsrooms have grown more diverse in over the last three decades in respect to both race and gender identity, but broadcast journalism still faces growing criticism from anti-racist campaigners who argue that it typically fails to accurately represent and serve people of colour. Viewing journalism through an intersectional lens may then also allow us to evaluate and demonstrate the actual value of diversity initiatives, and begin to determine best practice for decolonising our newsrooms.

News selection is often described using a one-size-fits-all paradigm: the concept of “news values”, developed by Norwegian peace researchers Galtung and Ruge in the 1960s.[i] News values are a set of criteria – such as meaningfulness, negativity, unexpectedness, etc – that a story must be seen to meet in order to be considered newsworthy. Considered to be the gold standard for thinking about news selection, this theory has been revised, updated and expanded over the last few decades but is rarely challenged outright. However, Galtung and Ruge’s study was limited in terms of geographical area and time period, and was solely focused on stories concerning specific international crisis and published in a small number of national newspapers. This narrow context and sample may have negatively impacted the generalisability of their results—a limitation they themselves note in the original paper.[ii]

Moreover, when viewed through an intersectional lens, this over-reliance on typologies, and the inherent assumption that news selection is predicted by a uniform practice around the world, begins to seem quite limiting and reductive. It appears neither flexible enough, nor suitably complex, to accurately and fully describe the processes used in today’s increasingly diverse newsrooms to decide what is or is not “newsworthy”, instead reducing the complexities of human thought to a mere abstraction. 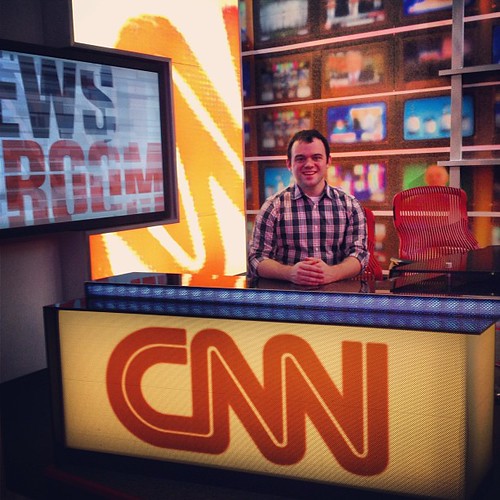 “Live from Studio 7… #CNN #journalism #broadcast #news #atlanta” by franklingraves is licensed under CC BY 2.0

Although it had existed as a concept since at least the early sixties, the invention of the term intersectionality is typically attributed to a 1991 paper published by American academic and lawyer Kimberlé Crenshaw.[iii] In short, intersectionality typically describes how an individual’s different identities overlap and intersect to create compound, interdependent systems of discrimination and disadvantage. For example, a Black man may experience racism and a white woman may experience misogyny, but a Black woman is likely to experience both—sometimes simultaneously. Therefore, her experience of misogyny is likely to differ from a white woman’s experience, and her experience of racism may differ from a Black man’s experience. Modern ideas about intersectionality widen the paradigm’s focus to include identities other than race and gender that may be used to discriminate against someone, such as sexual orientation, class, disability, etc.[iv]

David Mattingly, a British professor of Roman archaeology, puts forward a similar theory, suggesting that an individual’s different or “discrepant” identities—such as class, race, gender, etc—would cause them to experience and react to the process of colonisation differently.[v] Up until fairly recently, the dominant paradigm in the study of provincial Roman societies suggested that colonised indigenous peoples gratefully transformed into Romans overnight, without resistance and in a uniform process across the Empire.[vi] This way of thinking impacted studies of pre-Roman indigenous societies, framing them as uncultured or “savage” in a manner reminiscent of how white supremacy and colonialist ideologies often conceptualise African Americans, First Nations peoples, and other people of colour, in the United States. These concepts are often used to dehumanize perceptions of the colonised to justify the act of colonisation, and subsequent—and, arguably, consequent—oppression, subjugation and enslavement of indigenous peoples.

Mattingly argued that indigenous peoples did not, in fact, passively receive Roman culture and values and adopt them as their own, and would have engaged in resistance as well as negotiation between their own culture and that of the invaders.[vii] We might also recognise, he argued, that “the multiple life experiences of people will inevitably create cultural diversity”.[viii] The imperial structures imposed upon local actors would have affected them in different ways depending on their class, religion, gender, etc. Furthermore, individuals might emphasise different aspects of their identity more than others during different phases of their lives or in specific situations.

Accepting these theories as true, it might then be reasonable to suggest that individuals in newsrooms might experience doing journalism differently, depending on their different identities. For example, a white man might choose to report different stories to a Black woman, who might have different perspectives on what is newsworthy or not, whose voices should be privileged, and whose faces should be shown onscreen. This is perhaps particularly true in a diverse, colonial nation such as the United States, shaped by factors such as the trans-Atlantic slave trade, America’s Indigenous cultures, and extensive immigration from both European and non-European countries. Furthermore, those experiences and ways of working might change over time as reporters conceptualise and reconceptualise their identities in response to changes in forces outside of themselves, such as shifts in company culture, professional values, and the socio-political and economic climate of the country.

A timely and salient starting point for analysis would seem to be US-based broadcast or television news, due to the ever-increasing criticism and politicisation of its decision-making processes by progressives and right-wing populists alike. Broadcast news organisations are frequently criticised for covering or not covering certain stories, for emphasising or ignoring certain aspects of a story, and privileging certain voices over others. For example, stories about missing white women are often prioritised over stories about missing Black women, and missing Indigenous women are rarely mentioned at all. [ix][x] In the case of violent crimes, such as school shootings, campaigners for gun control have noted that the perpetrator is often focused on at the expense of providing a voice to the victims and their families.[xi]

Research suggests that for most Americans, television remains their platform of choice for accessing journalism, and cable news in particular has been accused of exercising a disproportionate impact on the country’s political landscape.[xii] For example, right-wing cable news channel Fox News has been accused of acting as a propaganda outlet for the Republican Party and actively campaigning for former President Donald Trump, amongst other acts of impropriety and bias.[xiii] Furthermore, America has become a focal point in recent decades for global discussions concerning intersectionality, immigration and the long-term systemic impacts of European colonialism.

There is already a considerable body of scholarship examining bias in broadcast news, but little that interrogates the basic processes that underpin and inform the final product that such analyses aim to investigate. Moreover, journalism is still often understood as an Anglo-American construct by many and the majority of studies continue to centre white, European perspectives—despite the global nature of modern news gathering and distribution.[xiv] Nevertheless, it would be remiss not to mention that some comparative studies of news selection do centre non-Western narratives and contexts. However, they are less common and less prominent within the canonical literature, and many are based on Western perspectives and theories.

My research also retains a focus on Western media—and in a former European colony. But studying American news media from a perspective that is deliberately intersectional and seeks to directly challenge white, Western, hegemonic views, many allow us to start moving away from previously accepted Eurocentric assumptions of homogeneity.

[i] Johan Galtung & Mari Holcomb Ruge. “The Structure of Foreign News: The Presentation of the Congo, Cuba and Cyprus Crises in Four Norwegian Newspapers,” Journal of Peace Research 2.1, (March 1965): 64-91.

Black History Month Roundup: U.S. Studies Online Special Series
Documenting Donald: A Trans-Media Post-Mortem about Documentary-Making during the 2016 Presidential...
Book Review: 'Hattiesburg, An American City in Black and White' by William Sturkey
'Is It Because I’m Black?': The Music Industry, Image, and Politics in the Careers of Syl and Syleen...
Review: American Historical Association Annual Meeting
Review of 'Avant-Gardes Now!' Symposium
USSOcast: Interview with Glenn Houlihan (Peter Boyle BAAS MA GTA recipient)
The Best of 2016, and What's next in 2017

Naomi Smith is a freelance journalist and postgraduate researcher at Birkbeck, University of London. Her current research looks at how gatekeepers at broadcast news institutions in the USA decide what is and is not newsworthy, with a view to reimagining the "news values" theory from an intersectional perspective.
View all posts by Naomi Smith →
Tagged  Media, Research.
Bookmark the permalink.