Invoking the protection of youth as an excuse for censorship is nothing new, but it did reach now infamously ridiculous extremes in the movement to censor American comics in the 1950s. The polemical book Seduction of the Innocent, Fredric Wertham’s treatise on the influence of comic books on juvenile delinquency, was  central to this movement and led to the comics industry imposing rigid self-regulated restrictions on all its content in the form of The Comics Code Authority, which only lost its grip totally on the comics industry relatively recently when DC Comics abandoned it in 2011. Wertham has since been criticised and debunked from various angles, not least for his “study” containing many methodological errors, fudging of data, bizarre logical leaps, and intentional misreading of the source material, which ranged from claiming Superman was reminiscent of the Nazi “SS” (because of the giant S on his costume, and resembling the “Übermensch”) and saying Blue Beetle was a “Kafkaesque nightmare” to alleging that Batman and Robin were a gay couple and Wonder Woman could turn girls into lesbians – covered by Carol L. Tilley’s essay Seducing the Innocent: Fredric Wertham and the Falsifications that Helped Condemn Comics and Jeet Heer respectively). 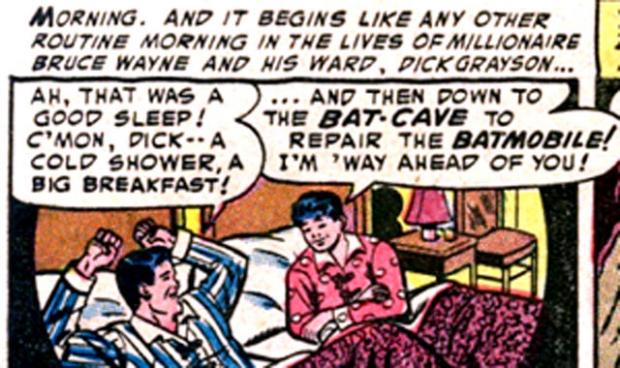 From their earliest days, rumours of homosexuality was at the heart of arguments against comics, especially Batman, where Bruce Wayne and Dick Grayson would often sleep in close quarters. Image taken Batman #84 (1954), by Bill Finger, David V. Reed and Sheldon Moldoff. Reproduced here under fair dealings provisions for academic purposes. © Marvel Entertainment

One assumption created from the aftermath of this decades-long quest to restrict and censor comics is that the “social science community” (especially psychiatrists and sociologists) were to blame for this moral panic, which has been the stance of some critics. However, I think this position is naïve at best and it erases the long history of social scientists challenging calls for censorship of children’s literature, as well as dismissing the present social science research efforts. Seal of Approval: The History of the Comics Code, by Amy Kiste Nyberg, details the numerous studies preceding Seduction of the Innocent gaining traction during this period. Many of these papers concluded at the time that reading comics had no connection to youth corruption, yet they were mostly ignored in favour of religious and political organisations selecting the minority of academics that agreed with them. It was the moral conviction of these crusaders that comic books were influencing children negatively, that powered their tireless campaigning for censorship.

The fact that these campaigns based on faulty evidence escalated into Senate hearings and the adoption of the Comics Code is an embarrassment, and says far more about the politics of the time than it does about the validity of social sciences. The wider cultural effects of the Comics Code on artists and the comics industry are both observable and well-documented, particularly in David Hajdu’s book The Ten-Cent Plague: The Great Comic-Book Scare and How it Changed America, detailing the great professional losses and smear campaigns endured by comic creators post-Code.

The most prominent example of this is EC Comics, who were penalised heavily not only for their primary genres being “horror” and “crime” (both were banned by the code, even using the words in titles were prohibited), but also for their overt disdain for the censorship that they believed to be a personal attack on their artistic freedom. This culminated in a long legal dispute with censors over the tale “Judgement Day” (a reprint featured in Incredible Science Fiction #33) on the grounds that the comic featured a black main character and depicted racial prejudice; EC won their case, but all their titles (excluding comedy comic Mad) were still cancelled within a year of the Code being introduced, leaving much of their staff without work or at least a “controversial” blot on their resume.

However, there has been comparatively scant research into the effects that this censorship has had on the youth in question, particularly in regard to whether censorship was the most effective method of protecting children and that there are no unintentionally harmful consequences of censorship on young people.

Even advocates against censorship sometimes unintentionally devalue the impact and validity of comics as “art” by assuming the medium is just “harmless fun for kids”, not least because it dismisses what young people deem as important to their lives. There is (at least anecdotal) evidence to suggest that restricting obscene material unintentionally increases interest in it, which many parents can attest to be especially true with children eager to rebel against authority.

However, perhaps an even more controversial position is suggesting that censorship, even in cases that most agree are “reasonable” restrictions (such as ultra-violence), restricts the healthy development of children into adults. That position is elaborated in Gerard Jones’ book, Killing Monsters: Why Children Need Fantasy, Super Heroes, and Make-Believe Violence. Jones mixes anecdotes from his own family life and experiences as a comic writer, educator and parent, with the varied research from psychologists and social workers to support his thesis that young people not only benefit from freedom to explore make-believe violence in the entertainment they consume, but posits that it can be essential part of youth life, particularly children with few outlets for expressing themselves and their troubles. He theorises that youth media is often wrongly viewed through an adult lens; adults tend to either be overzealous in protecting young people what they deem to be “mature content”, or they interpret depictions of violence in a radically different way than from a child’s perspective. 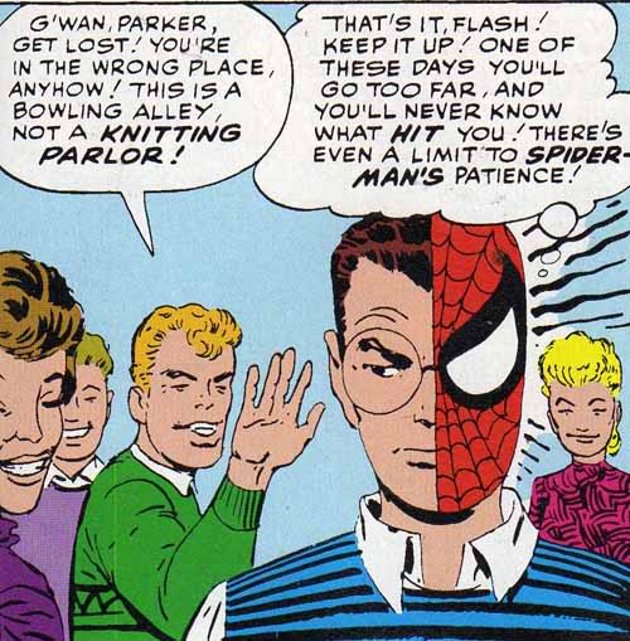 Many critics have suggested that comics give children and adolescents space to work through their problems through fantasy narrative. Image taken The Amazing Spider-Man #5 (1963), by Stan Lee and Steve Ditko. Reproduced here under fair dealings provisions for academic purposes. © Marvel Entertainment

Jones, throughout his research, was surprised to find that the young people he encountered did not generally take the literal or prescriptive interpretation of what he perceived as mindlessly violent scenes in media, (including in one of his own comics, Freex, noted for its wild fantasy action sequences). Instead, young consumers were using these stories and scenes as catharsis for their own volatile emotions, as a way of engaging with real-life violence and complex issues observed in the world without directly engaging in physical violence or unhealthy behaviour in general. It was the simple and visceral way in which the stories were executed that was the key to making these themes accessible for a younger audience, which adults found low-quality and potentially frightening, but children found both entertaining and digestible.

The misunderstanding as Jones sees it, is that young people are viewed by adults as passive consumers of media, when the reality is children can engage with media just as much as adults can, and interpret this media to improve their lives and problem-solve through play. Rather than casting them as babes in the wood to be protected, Jones claims that: “Viewing them as active users enables us to work with their entertainment – any entertainment – to help them grow” (p19). It seems the core failure of discourse surrounding comic book censorship is imposing adult assumptions onto youth psyches. Efforts to protect youth from corruption without first understanding them, denies young people an outlet that offers comfort and character building to them, albeit as an unconventional source that isn’t necessarily viewed as “wholesome”.

I echo the same conclusions that social scientists came to during the Golden Age of mainstream comics, which many academics still conclude. There is no evidence that blanket censorship of “obscene” material in comics, or any medium for that matter, benefits youth or prevents their corruption. Engagement between adults and youth, learning what young people “get” from consuming this material, is the key to understanding what the impact of this media consumption. And I ask of the same would-be censors and anti-censors alike, if you’re not interested in centring young people in this analysis, then who does this really benefit?

Hajdu, David. 2008. The Ten-Cent Plague: The Great Comic-Book Scare and How it Changed America. New York. Farrar, Straus and Giroux.

‘[S]omething to feel about’: Zora Neale Hurston’s Barracoon: The Story of The Last Slave
"Teaching America" series Round-Up
Research Across Borders: Charlie Thompson, AHRC Library of Congress Fellow 2014
The Historiography of Ethan Allen
The Stettheimer Dollhouse: A Life and Salon in Miniature
The Importance of Sherry Receptions; or, Where Are All The Women In This Archive? First Impressions ...
Best Of the Web: Black History Month Must-Reads
Symposium Panel Review: ‘Visualising the Americas: Kent’s Third Annual Americanist Symposium’, The U...

Alex Liddell is an independent researcher, writer and blogger at Obscuricom.com. They are a philosophy graduate from the University of East Anglia, and their published papers include: “Dolores Umbridge and the Lawful, Bureaucratic Evil in the Ministry of Magic” in A Wizard of Their Age 2: Critical Essays from the Harry Potter Generation (SUNY Press) and “Duality and Double Entendres: Bi-Coding The Queen Clown of Crime from Subtext to Canon” in Essays on DC’s Harley Quinn (Texas Tech University). Alex’s research interests include comics history, censorship, media representation and LGBT studies.
View all posts by Alex Liddell →
Tagged  American comics, Censorship, Media, Youth.
Bookmark the permalink.