The Transatlantic Literary Women Series is fast proving itself a popular network, with academics, creatives and locals alike getting involved in discovering the literary lives and works of transatlantic women. Funded by the US Embassy/British Association of American Studies Small Grants Programme, the scope of the project spans the early nineteenth-century to the present. It aims not only to re-address the lives and works of often-neglected women writers with connections to both Europe and the US, but also to contextualise their writing against key historical and cultural themes; including campaigns for anti-slavery, suffrage, modernism, issues of race and class and transcultural poetics. A key strength of the series is its attention to both creative and critical responses to transatlantic interests. Building on the success of previous events, including a series of book clubs and an afternoon workshop, the writing showcase offered a glimpse into how contemporary writers have taken up the theme across genres, generations and continents.

Held in Glasgow’s CCA Club Room, the balance between intimacy and formality made for a welcoming atmosphere. The evening was enthusiastically introduced by Saskia McCracken (Scottish Writers’ Centre) and the evening’s host, novelist and poet Carolyn Jess-Cooke, kicked things off by reading a poem about nineteenth-century feminist and social reformer Josephine Butler. Butler’s prolific writerly and political life set the stage for an inspired, sparkling poem and indeed evening. Her work was followed by my own reading of twin poems on Sylvia Plath and Zelda Fitzgerald. From Woody Allen (Midnight in Paris) to Belle & Sebastian (the Europop epic, ‘Enter Sylvia Plath’), both figures have been variously appropriated for cultural mythologising, and while the reading continued in that vein, I hoped to grapple more subjectively with their legacy. There’s something very cathartic about writing on the authors themselves; when I was asked by Transatlanic founder Dr. Laura Rattray at the Q&A about the difficulty of writing about someone with the cultural weight of Plath, I realised it was actually easier to self-consciously address Plath as an amalgamation of mythology—of the characters and images she created herself—than to write for example an essay on her influence. This highlights the importance of having a creative angle to a project like the TLW series, since a free associative take helps blend the writer and the work, teasing out their affective and intellectual influences. 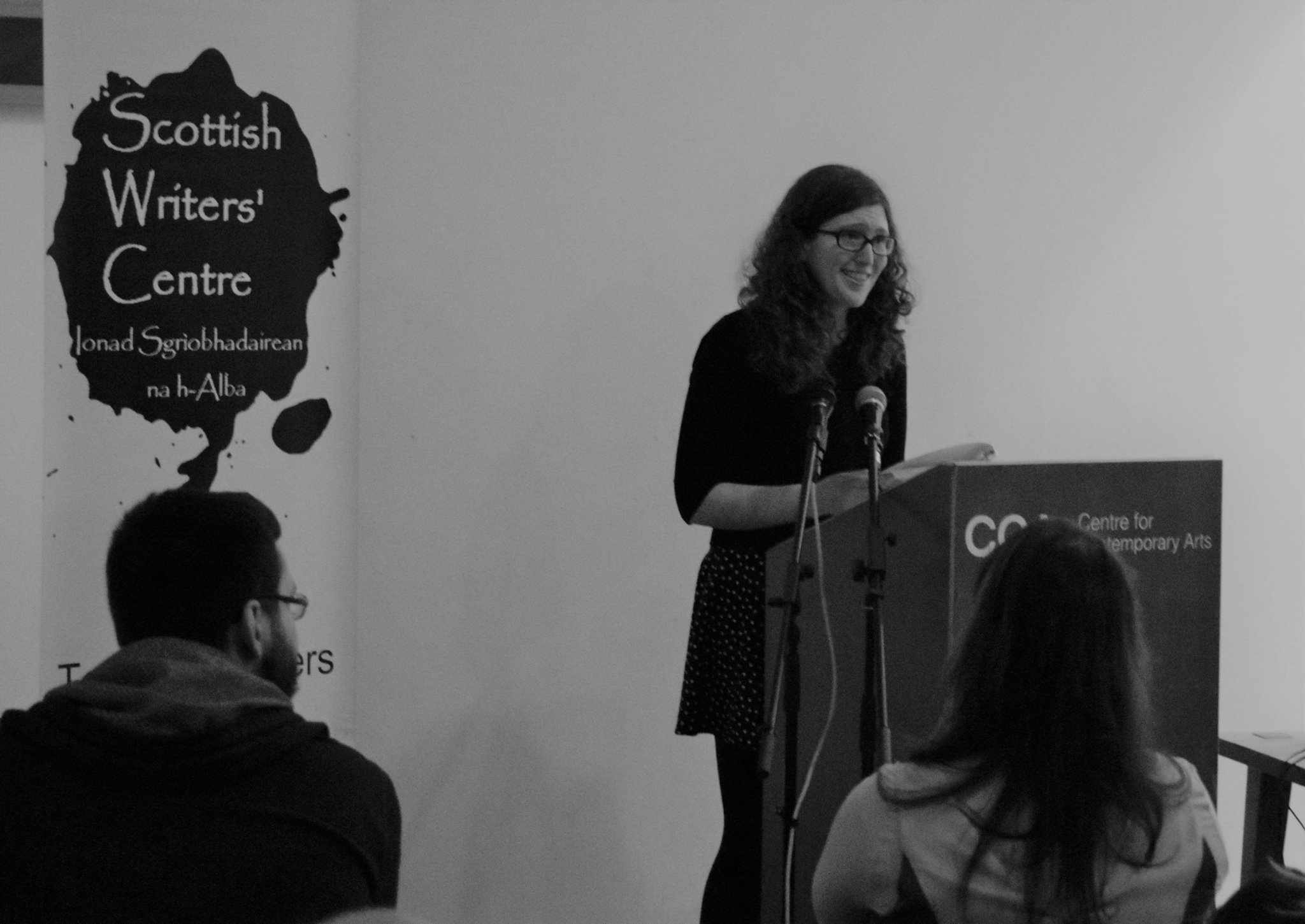 Next up was Carly Brown, who read a reflective prose piece called ‘Thoughts on Homesickness’. Hailing from Austin, Texas, Brown explored the complicated experience of constant homesickness, of feeling displaced from one’s native land and finding new kinds of belonging elsewhere. The realisation of this cross-continental identity was sparked by a longing for ‘the watery filter coffees of [her] homeland’ while holidaying in Milan; tired of the Italians’ compulsory espressos, she found herself craving representational objects from both Scotland and America. She was both ‘sick with love for the taste of my childhood’, those ‘breakfast tacos, sunlight and avocados’ which characterise Texas, but also the ‘rain and bay windows’ which embody her life in Glasgow. While this was prose, the modulations and evocative details confirmed that Brown is a poet—and indeed Scotland’s 2013 National Champion of Slam Poetry at that. The feeling of dual belonging is evidently accelerated in an era of globalisation, where migration and movement across borders for work and education is more fluid. In the current political climate Brown’s work was a much welcomed celebration of plurality in experience.  She left us with the image of ‘treading the strange water between two continents’, but it is this ‘strange water’ that provides the unique take on sameness, difference and cultural connections which often inspires transatlantic writers. Indeed, speaker Alex Hackett took up this theme quite literally with three short poems which instigated a dialogue with the North Atlantic Sea, peppered with images both delicate and visceral to suggest ‘that harshness of wildness’ that characterises the in-between. 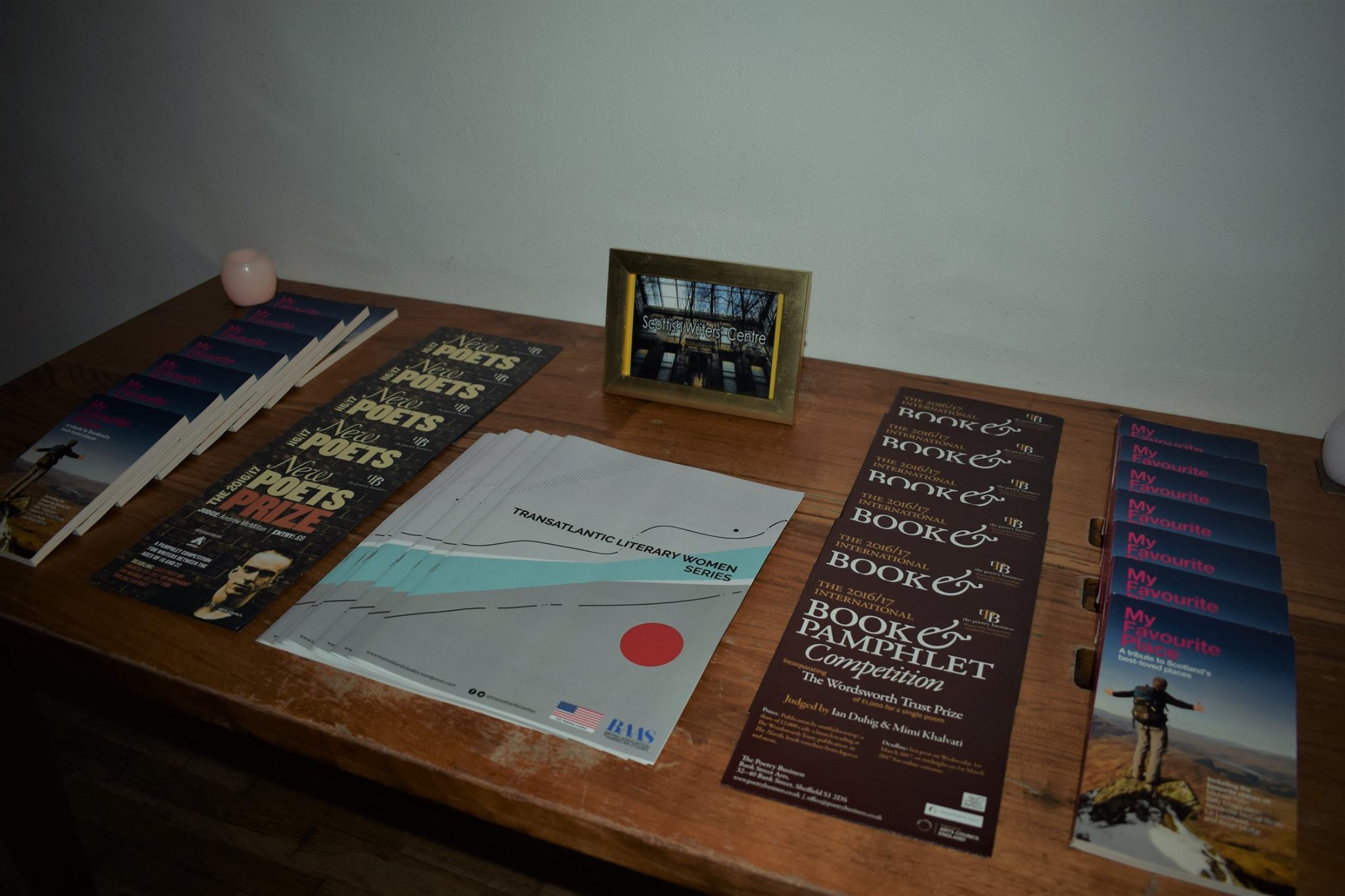 American writer Angie Spoto then read two poems titled ‘Liquorice Woman’ and ‘After Betty Davis’, celebrating both solitude and love. She left us with the poignant lines: ‘I just want to be your Virginia Woolf novel / Skeleton key, still glass bottle’. One facet of transatlantic experience that reflected throughout each speaker’s work tonight was that of longing, the sense of being divided between past/present, Europe/America, home/abroad, self/other. Spoto’s poems, like Brown’s piece, used objects of everyday import to signify this implacable desire. Gertrude Stein is a key transatlantic writer and her semiotic toying with objects in Tender Buttons (1914) raises provocative comparison with how these writers marry language and land by evoking personal relations to objects. 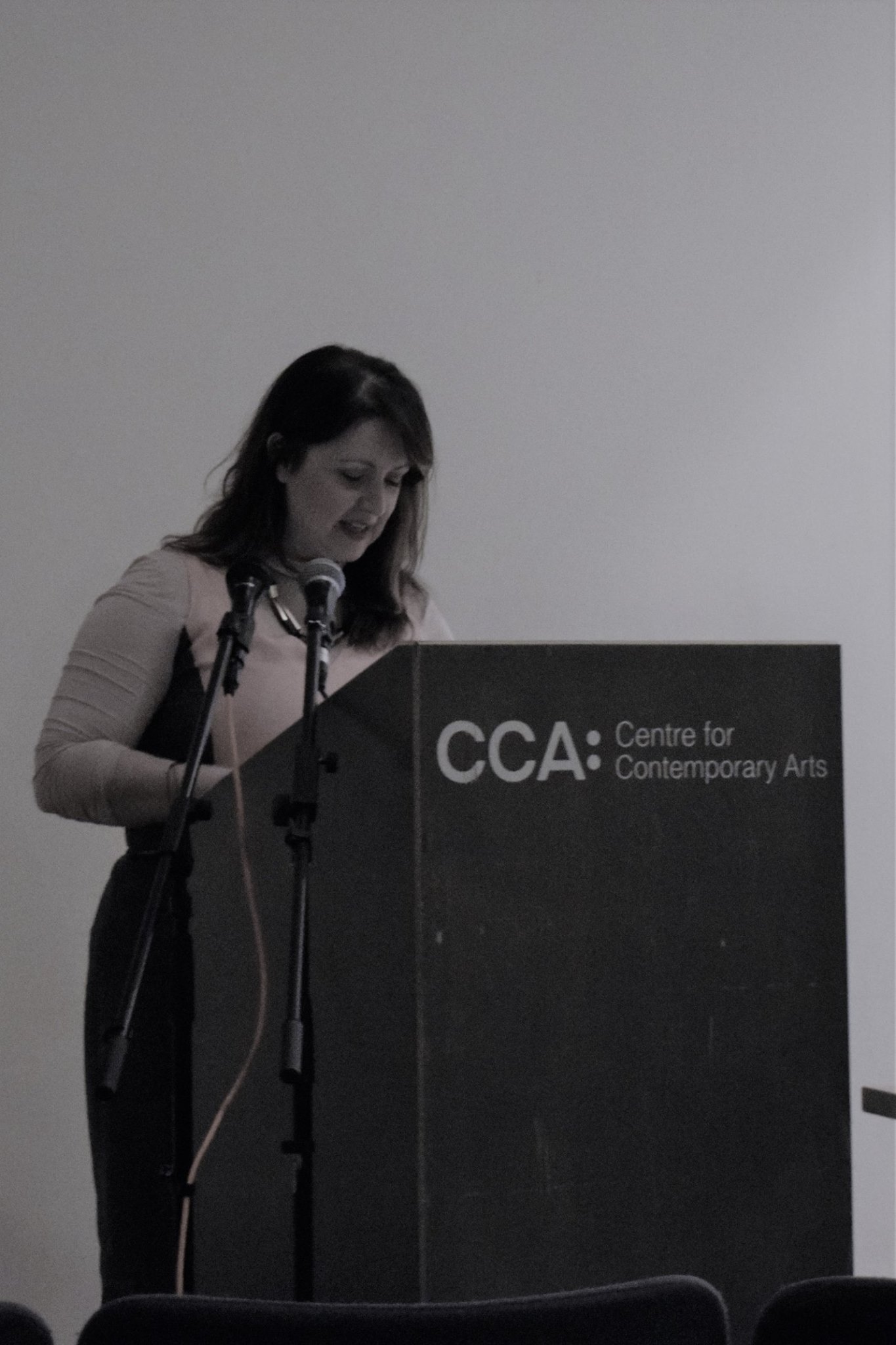 In the writer’s absence, Jess-Cooke read a sonnet by Sandra Whitnell, which was inspired by anti-slavery campaigner Frederick Douglass and a feminist history talk on the suffragettes. ‘Sisters and slaves must be freed today’ neatly encapsulates important threads of history (the emancipation of both slaves and women) and reinforces the political importance of transatlantic experience as a sharing of social and political discourse. Louise Turner, with an extract from her forthcoming archaeological novel, The Gryphon at Bay, continued in the historical vein with a piece that celebrated the importance of agency in historical fiction as a means of inspiration for the present.

Agency was a continuing theme for Mairi Murphy, whose poems explored the lineage of endurance and survival carried through generations afflicted with Lynch syndrome. The narratives woven were of play, strength and displacement, images of children scrambling among sheep, of homesickness, of families continuing bonds across borders: ‘Now I know how a hungered migration / pierces the heart’s core.’ Kathryn Metcalfe closed the evening with ‘Three Letters and an Ocean’ and ‘Liberty’, poems dedicated to her grandmother who passed on her stories of migration. The intergenerational and intercontinental theme is carried through as an experience of nostalgia and loss, ‘the America she knew no longer existed’; the idea that one woman might represent ‘so many people in the world whose voices weren’t heard’. From small-town Paisley to New York with its ‘chorus of Irish and Italian voices’, Metcalfe rendered the sense of a journey inflected with both magic and sadness, celebrating endearing traditions which carry across cities and generations.

In a time when fears of immigration puncture the daily news and draconian laws are drawn up on migration, a project like the Transatlantic Literary Women Series seems more crucial than ever in recalling the colourful and heartwarming narratives of cultural exchange and social transformation inspired by transatlantic experiences. Tonight’s showcase warmly invited new writers to the stage whilst celebrating often neglected figures from the literary and historical past, and overall there was a striking sense of endurance, survival and creative stimulation in the face of distance and homesickness, rising to affirmations of multiple belongings.

Maria Sledmere is studying for an MLitt in Modernities at the University of Glasgow. Former president of the Glasgow University Creative Writing Society, she now co-edits SPAMzine, writes music reviews for RaveChild and has work published in the likes of GUM Magazine, Germ Magazine, DATABLEED and From Glasgow to Saturn. In her spare time she likes to wander, write poetry, paint and blog about everything from Derrida to Lana Del Rey at http://musingsbymaria.wordpress.com
View all posts by Maria Sledmere →
Tagged  Creative Writing, Literature, National Identity, Nostalgia, Scottish Writers' Centre, Transatlantic.
Bookmark the permalink.