The Transatlantic Literary Women series continues to excel in its exploration of the often undervalued contributions of modern women writers across North America and Europe. Its April 22nd event, ‘Transatlantic Women in the Trenches’, provided a spatial context for discussing how these literary women played a part in the First World War, as well as its influence on them and their works. Set in the First World War trenches reconstruction in Glasgow’s Pollok Park—a project run by Northlight Heritage in partnership with the University of Glasgow, Glasgow City Council, and Stewart Melville’s College—the event comprised talks from various academics and scholars. The open air setting provided a relaxed, communal atmosphere as attendees were encouraged to sit or stand as these promising talks progressed.

Dr Laura Rattray (University of Glasgow) opened the discussion with her talk, ‘American Women Writers and the First World War’, providing a general overview of the event’s context and the contributions of many women writers to the war effort; fundraising and delivering supplies even before the United States officially declared war in April 1917. Rattray’s particular focus was Edith Wharton, whom she used as a focal point to introduce the event’s avenues of inquiry, such as the racism and sexism present in the war effort’s insistence on ‘saving white womanhood from savagery’. She also noted Wharton’s receiving of the Légion d’honneur as an instance of her adopted country ‘claiming’ her, thus exploring the troubled concept of nationhood and belonging, a staple thread for the series. In addition, Rattray sketched an overview of these women’s efforts to aid not only soldiers on the front but also the injured and less abled who were elided by masculinist war coverage and post-war writing, as well as the war’s detrimental effects on personal health, finance, and ideologies. Her talk thus paved the way for the event’s main goal: a re-evaluation of these literary women’s contributions.

This examination continued as Dr Alice Kelly (University of Oxford) delivered her talk, ‘Nurse, Suffragette, War Writer: Ellen LaMotte and The Backwash of War’. Kelly’s historical, biographical approach uncovered promising new material on LaMotte, a particularly neglected literary woman. LaMotte was presented as a relatively solitary figure distracted by her new network of modernist friends, such as Gertrude Stein and Alice B. Toklas. Kelly’s talk thus intertwined womanhood, sexuality and nationality in the life of an American woman struggling to find her place overseas and in the literary and artistic modernism of the early twentieth century. Kelly’s particular focus, in her overarching and timely research project, lies in exploring why LaMotte left the war effort after her keenness to join it.

A tour of the trench reconstruction followed, as Dr Olivia LeLong guided the party through the installation, providing information on life in the trenches. The tour was supplemented with readings from event organisers Marine Furet and Saskia McCracken (University of Glasgow), who read from the works of the women discussed at the event, such as Edith Wharton and Mary Borden. This provided the event with a material context and an affective significance, as the voices of women writers were situated in an accurate reconstruction of historical conditions. 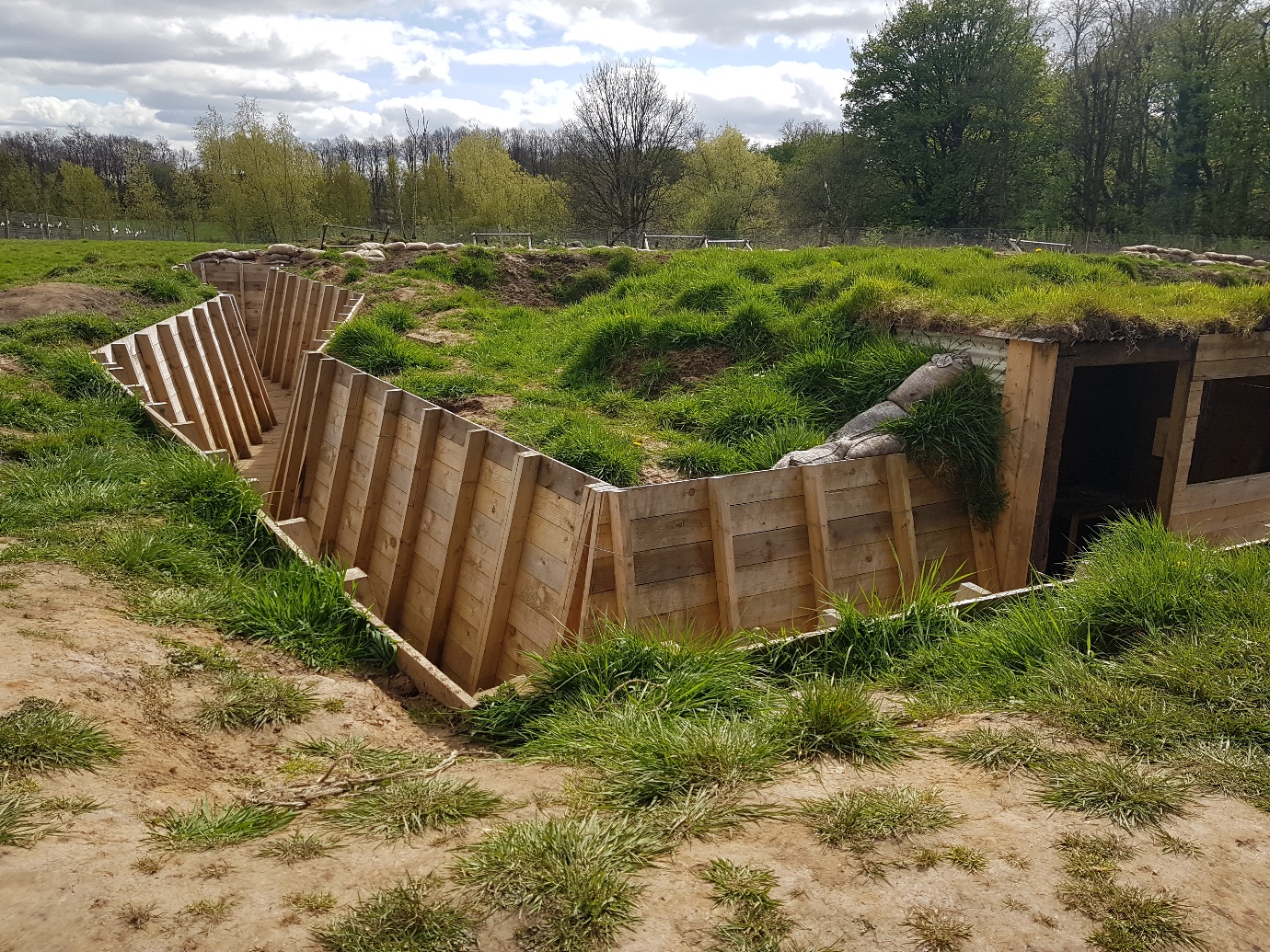 A view of the British trenches reconstruction at Pollock Park, Glasgow

For the final section the event split in two: in one area was the opportunity for a discussion on the day’s themes, where participants were gathered around a table and encouraged to write comments and feedback on a paper tablecloth; while talks continued in another area, continuing the event’s relaxed atmosphere as speakers and attendees sat on the grass. Dr Hannah Tweed (University of Glasgow) then presented on Mary Borden with her talk, ‘Women Writers at the Front: Medical Service and Subversion in the First World War’. Through Borden’s diaries, Tweed explored the tenuous relationship between artifice and reality in her writing, extending its implications to a discussion on representations of medicine and gender. She thus presented a feminist exploration of depictions of women under the male gaze on the Western Front. This provided a literary perspective on the rupture of values, both cultural and political, presented in wartime writing. Tweed’s focus on Borden’s diaries thus marked a re-evaluation of such war writing, opening avenues of discussion for literature beyond that of traditionally male-dominated documentation of the First World War. 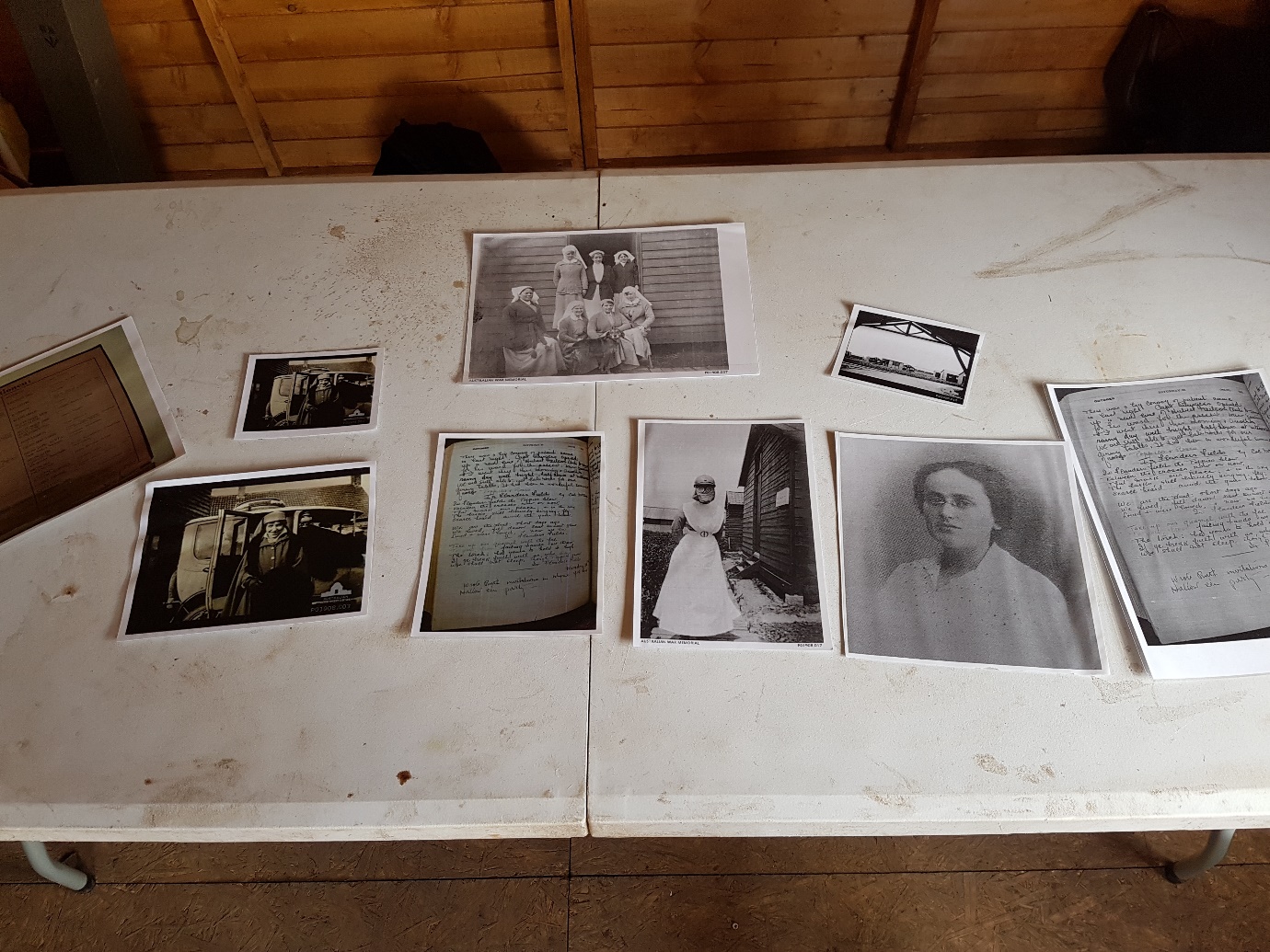 Anna Girling (University of Edinburgh) continued this line of thought with a talk titled ‘Maddened with War: Nancy Cunard and the First World War’. The discussion’s focus shifted from wide-ranging activism to personal crisis as Girling discussed the intertwining of rootlessness and gender in Cunard’s life, considering the mental and emotional effects of survivor’s guilt. The talk championed Cunard’s literary and political influence, exploring Cunard’s observation that ‘writing perforce rhymes with fighting’.[1] In a progressive interrogation of Cunard’s texts, Girling noted the relative erasure of Cunard’s work from the male-centric First World War canon, positing a reclamation of this exciting female perspective.

The event complemented the Transatlantic Literary Women series as a whole, providing a comfortable space in which the works of these often overlooked women writers can be rediscovered and studied. The day’s discussions were thought-provoking and engaging, in a time when coverage of senseless conflicts and rampant inequality still dominate the media. In the centenary of America’s entry into a war which opened wide the once unassailable values of Western civilisation, the event was a welcome engagement with women’s contributions to this period, and how these experiences were represented in their works and their lives. From unique perspectives on gender to wavering sentiments of nationhood, the event set the stage for a number of exciting new projects. Undoubtedly, when the series concludes in June it will leave a promising influence in its wake.

Alastair Millar received his MLitt in Modernities from the University of Glasgow, where he focused on gender fluidity and nomadic subjectivity. He now works as a writer and independent scholar. You can find him at queeryandpraxis.wordpress.com
View all posts by Alastair Millar →
Tagged  C20, Gender, Transatlantic Literature, Women Writers, WW1.
Bookmark the permalink.