Since January 2017, the Transatlantic Literary Women Series has attracted scholars, students, and members of the public to an extensive range of events. Supported by the British Association for American Studies and the US Embassy Small Grants Programme, the series included guest lectures, a monthly book club, a creative writing showcase, and an a visit to the reconstructed WW1 trenches in Glasgow’s Pollok Park. This final event, a Transatlantic Symposium, brought together ongoing conversations which had developed throughout the series; on North American and European women writers, their transatlantic identities, and the importance of their work. Held at the Glasgow Women’s Library, the hard work that has characterised this project was readily apparent, with a specially-curated transatlantic playlist, vibrant poster displays, and photograph slideshows with highlights from the series. The library provided a welcoming atmosphere for all involved, with refreshments throughout and a rich array of relevant novelists on the shelves to peruse during breaks.

Series organiser Dr Laura Rattray (University of Glasgow) opened proceedings with a reminder of the project’s central goal: addressing neglected women writers whose work invites a transatlantic approach. Saskia McCracken (University of Glasgow) continued the introduction, reading H.D.’s Imagist favourite, ‘Oread’ (1916). The poem’s turbulent motion and its strange longing for spatial metamorphosis made it an appropriate start to the symposium, as motion, surrealism and the slippery uncertainty of identity were recurrent themes throughout the day. 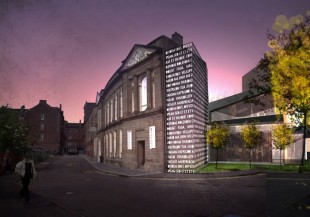 Melanie Dawson (The College of William and Mary) began discussions in earnest with ‘Age-Conscious Modernity’, which artfully yoked historical advertising discourse and magazine articles on flappers with works from the likes of Edith Wharton, Zora Neale Hurston and Margaret Kennedy. She asked: if modernity is the era of the new, does this make it the era of youth? Her talk explored often neglected literary representations of ageing but also contextualised this with demographic statistics, prompting reflection on how a relatively disproportionate age-group had such an impact on wider society. A particularly productive Q&A invited further connections between age and nationality, gender, race and other cultural modes such as film.

Dawson’s talk was followed by Gary Totten (University of Nevada), who presented on ‘Transatlantic African American Women Writers and Racial Justice in the Age of Jim Crow’. Focusing predominantly on Ida B. Wells and Jessie Redmon Fauset, Totten sketched out innovative approaches to travel writing. This gave a critical slant on racial injustice, negotiating the form’s expectations of the picaresque and tour guide wit to establish an active, politically-motivated but nonetheless popular discourse. What drew most attention was the argument that the act of writing and travelling itself contested stereotypes about African American female selfhood, offering examples of African American cultural power and resistance to oppression. After lunch, Tracy Brain gave a much-anticipated talk on ‘Sylvia Plath and You’, exploring Plath’s use of the second-person in poetry and fiction. The obsessional imperative of the ‘you’ address was situated within American cultural contexts, with historical examples from recipe-books and advertising reminding us of its rhetorical function. Drawing on Plath’s writing and letters, Brain prompted us to think about how ‘you’ becomes a dissociative mode of confession as well as a way of interpellating the reader in affective tones, both accusatory and empathetic. Brain’s attention to detail celebrated Plath’s literary complexity, considering her divided, transatlantic identity while also offering an overview of Plath’s life that intertwined biography and work. This focused approach, orientated towards form and literary technique, invited audiences to apply transatlantic contexts to the aesthetic experimentations of other writers. Gertrude Stein’s Tender Buttons (1914), for example, would have provided an interesting intertext, since its use of second-person has often been compared to the rhetorical register of cookbooks.

Such hybridised discourse persisted as a central theme of the day, as the afternoon split up into three workshops. These included Claire Heuchan (University of Stirling) leading a seminar, ‘On Black Feminism across the Atlantic’; a creative writing workshop run by Victoria Shropshire (University of Glasgow), which explored representations of the journey; and a third workshop where a range of speakers presented a case for their favourite transatlantic literary women, the identities of which had remained secret until today. This element of playfulness underpinned the series’ strong appeal within and beyond the academy. The speakers provided accessible and engaging overviews of under-represented women writers from the early twentieth-century to the present, while triggering interesting connections between them and creating a welcoming space for academic exchange.

Edith Wharton, one of the favourite Transatlantic Writers

Following the workshops was a performance from prize-winning slam poet Carly Brown, closing the event with a characteristically punchy and vibrant performance. Hailing from Austin, Texas but studying for a PhD in Scotland, the 2013 Scottish National Slam Poetry Champion is herself a transatlantic writer. Her poems delivered sass and wit, while using lush imagery and spirited accents to render themes of identity, politics and belonging. They addressed her complex relationship to Texas, ‘Texas, I Can’t Bring You to Parties Anymore’, and waking up to Trump as president, ‘This Morning’. Brown’s poetry crystallised a sense of hope embedded within the transatlantic project at large: a poem, she argues, ‘is like saying “I’m here, where are you?”’. Brown’s performance gave a sense of reaching across discourses, time, and space to invite empathy, understanding, and productive cultural exchange.

Brown’s performance and discussion was an appropriate end to a symposium—and indeed a series—which encouraged collaboration, enthusiasm, and engagement. It was heartening to see the series’ aims fully realised at this event. In providing a forum for a range of researchers—from postgraduate to established academics—the symposium offered a receptive, friendly yet intellectually provocative take on women’s literary work, rigorously grounded in material and historical contexts. In addition to stimulating conversation on Twitter, the symposium was recorded by sound engineers Mark Cunningham and Jamie Loggie, to be released as an upcoming podcast. This lasting contribution will be well-appreciated by those who missed the event or would like to revisit the range of discussions and debates.

Maria Sledmere is studying for an MLitt in Modernities at the University of Glasgow. Former president of the Glasgow University Creative Writing Society, she now co-edits SPAMzine, writes music reviews for RaveChild and has work published in the likes of GUM Magazine, Germ Magazine, DATABLEED and From Glasgow to Saturn. In her spare time she likes to wander, write poetry, paint and blog about everything from Derrida to Lana Del Rey at http://musingsbymaria.wordpress.com
View all posts by Maria Sledmere →
Tagged  C20, Ida B. Wells, Jessie Redmon Fauset, Modernity, National Identity, Sylvia Plath, Transatlantic Literature, Women's Writing.
Bookmark the permalink.