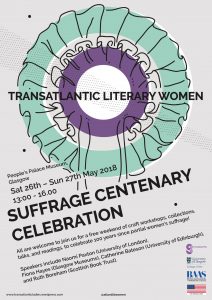 Walking through an exhibition that included Scottish suffragette Janet Barrowman’s very own women’s suffrage banner felt poignant, as attendees gathered to celebrate centenary of women’s partial suffrage. The banner was nestled in the corner of the Scottish suffrage exhibition (the walls lovingly adorned with transcriptions of suffrage letters and memorabilia), Glasgow’s People’s Palace Museum was an apt location for the talks planned over the weekend.  The event was free and open to the public, with the same talks scheduled across the two days. As well as spoken events, it included a workshop that encouraged adults and children alike to create their own women’s suffrage badges. Such accessibility and a family-friendly approach was refreshing, reinstating the notion that this is a subject that is, and should always be, accessible to all.

Organised by the Transatlantic Literary Women’s team and led by Saskia McCracken (University of Glasgow), the event was generously sponsored by U.S. Embassy London, the British Association for American Studies, and the University of Glasgow’s College of Arts Collaborative Research Award. This two-day event brought together conversations about American and Scottish suffragettes and suffragists. It illustrated the sisterhood that transcended geographical boundaries and highlighted women whose activism in the suffrage movement is often overlooked in favour of London-centric narratives.

Indeed, many of these historic women were a focal point throughout the day’s talks.  In particular, Scottish suffragette and actress, Maggie Moffat, was discussed in several panels and connected the broad themes covered throughout the weekend. These themes included the significance of theatre and performance in advancing the suffrage movement, with the activism and exhibitions introduced by Dr Naomi Paxton (University of London) at the beginning of the day recurring throughout the talks that followed — particularly the iconic demonstrations held on the New York City subway, where women became walking advertisements for the movement after they were refused traditional display advertising space throughout the underground stations. It was fascinating to hear accounts of this type of bold and engaging activism, from North America to the Scottish Highlands. 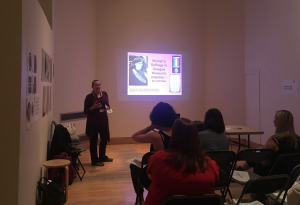 Theatrical performance as a mode of activism in the suffrage movement acted as a point of focus for Paxton’s keynote speech.  She began by contextualising the large number of women’s suffrage societies operating in the UK and beyond. Paxton’s examples highlighted activism from members of the Actresses’ Franchise League, such as exhibitions and publicity stunts put on by the organisation. The examples demonstrated how crucially symbolic the act of reclaiming public-spaces was for the movement, and how engaging members of the public required strategic tactics that simultaneously informed audiences whilst deconstructing harmful stereotypes. The use of comedy in theatrical performances was one such tactic, and the Q&A session included debate on whether the use of comedy in British suffragette plays could be seen as problematic due to the severity of the situation they often poked fun at — namely, the threat anti-suffragettes posed to tarnishing the image and reputation of women fighting for their rights.  However it was swiftly agreed that this use of humour was skilfully deployed to entice audiences whilst combatting demeaning stereotypes about those in the movement, using comedy to highlight the ridiculous nature of those very stereotypes.

The second talk of the morning enlightened the audience on the history of the suffrage exhibition in the very venue we were sitting in.  Fiona Hayes (Social History Curator, Glasgow Museums) illustrated the importance of ‘chance’ encounters leading to impressive museum exhibitions. Such was the case when, in the early 1950s, Janet Barrowman salvaged suffrage-related objects and memorabilia from a London exhibition that was closing and generously offered it to the People’s Palace Museum during an unsolicited phone call to the venue. She then rallied friends and family to hand-over anything relating to the movement still in their possession. The significance of these items was noted by Hayes as she demonstrated how they portray the individuality of women, with tea-sets, personal badges, and clothing speaking volumes about the personal lives behind the fierce campaigning. 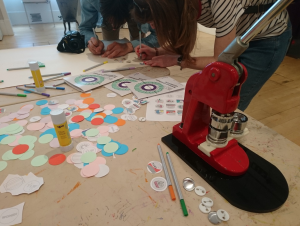 Once the lunch-break (situated in the luscious Winter Gardens of the venue) was over, the afternoon kicked-off with a letter-reading session. After a morning discussing the impact of performance, this was a particularly apt way to capture the essence of the day. Highlights included a reading of correspondence from and about Maggie Moffat, who was described as ‘walking to the court as if going for her summer holidays,’ after an arrest. The personal touch of the letter reading brought a further sense of poignancy to the discussions, a reminder of the private lives led by the some of the women at the forefront of the topics addressed.

Attention to the individuality of these women continued with Ruth Boreham’s (Scottish Book Trust) self-proclaimed ‘whistle-stop tour’ of suffrage activism in Scotland, mainly concerned with how Scottish women’s activism is overshadowed by London-based activism by those looking back. Boreham’s descriptions of rebellious activism up north caught the attention of the live-tweeters in the room, and a quick search of the #TLWSuffrage tag on Twitter will enlighten those who could not attend. The socio-economic position of those in the suffrage movement was brought to attention, with Boreham noting that many working-class voices have been erased from the movement worldwide. The power of language and terminology used against women during this time was central to Boreham’s argument, and the significance of women declaring themselves as ‘suffragettes’ and reclaiming that power on official documentation was brought up in the Q&A session. 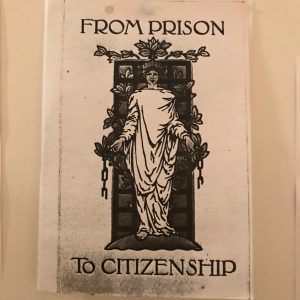 The afternoon wrapped up with Catherine Bateson’s (University of Edinburgh) talk on the legacy of American women’s suffrage, reminding the audience of the significant work done by American women to further the movement. Bateson offered an intersectional look at the struggle for rights in America during the nineteenth century onwards, highlighting the work of women such as Elizabeth Cady Stanton (organiser of the world’s first women’s rights convention) to demonstrate the relationship between suffrage and abolitionist activism. Yet discussion at the end of the talk illustrated that this unity was not always apparent, with Paxton and Bateson noting the harmful racial stereotypes portrayed in both British and American suffrage theatre performances.

It was noted by speakers and organisers alike that holding this event in the wake of such significant advances to women’s rights and bodily autonomy going on throughout the world in 2018 was a touching addition to the day. Each talk was delivered with the knowledge sitting heavy across the room that, although the women being discussed had pioneered significant advancement to women’s rights throughout history, there is still much to be done.

To find out more about the women discussed throughout the event, the team at Transatlantic Literary Women ran a ‘Suffragette Spotlight’ feature on their blog in the run up to the day, which you can find here.

Chiara Bullen is a recent graduate of the MLitt in Publishing Studies course at the University of Stirling. Previously on the committee of the Society of Young Publishers Scotland as a Marketing Officer, she is now the Media Coordinator for Independent Publisher Red Press.

Chiara Bullen is a recent graduate of the MLitt in Publishing Studies course at the University of Stirling. Previously on the committee of the Society of Young Publishers Scotland as a Marketing Officer, she is now the Media Coordinator for Independent Publisher Red Press.
View all posts by Chiara Bullen →
Tagged  Archival Practice, Ephemera, Partial Suffrage Centenary, People's Palace, Public Engagement, Social History, TLW, Transatlantic Literary Women, Women's History.
Bookmark the permalink.