Following a highly successful series last year, the second season of the Transatlantic Literary Women Series was officially launched on the 19th September. Run by women, and in celebration of women, the series focuses on female writers on either side of the Atlantic; specifically, their lives and work in all genres from the early nineteenth century to the present day. 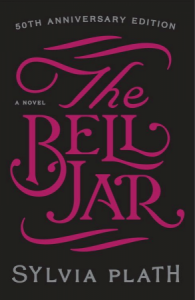 The launch itself was in two parts; the first of which was a welcome reception. Organisers, regulars and newcomers alike partook in the food and wine provided. Introductions and reintroductions were made as the room filled to capacity. The reception was social and relaxed, thoughtfully creating an informal environment – one that was unburdened by the sometimes intimidating intellectual tone that can hinder similar events. As well as providing an opportunity to toast to the new season, it also served to promote the series’ future events – for example, thirty free copies of Sylvia Plath’s The Bell Jar, were given away in preparation for the next meeting of the TLW reading group.

Following the reception, attendees were ushered into the next room for a presentation by Dr Eilidh A B Hall titled ‘Spanglish as Resistance: Undoing Transatlantic Colonialism’. Once glasses were refilled, Dr Laura Rattray (founder of the Series and convener of the MLitt American Studies course at the University of Glasgow) addressed the standing room only crowd and welcomed them to the start of the new season. After she introduced the rest of the Transatlantic Literary Women team, Rattray gave a brief background of the night’s speaker.

Hall jointly runs The SALSA Collective, a research community for those interested in latinidades across the Americas. A graduate of the University of Glasgow, she is also a researcher interested in Chicanx (Mexican American heritage) literatures and cultures. Hall takes a specific interest in the ways in which Latinx women negotiate their feminisms in patriarchal institutions, and her enthusiasm for this subject showed throughout her presentation.

Hall began with an anecdote to highlight the current permeation of the Spanish culture in mainstream Western music. This worked well to ease her audience into thinking about the relationship between the two cultures and languages: a deeply complex relationship. She clarified that the Spanglish language was not simply a ‘conglomeration of Spanish and English dialects’, but also a result of cultural oppression and isolation. As she flowed through her presentation – that focused on how Spanglish is used by Latinx feminist writers as a means to ‘resist colonial erasure of their rich and diverse cultures’ – Hall acutely molded our understanding of Spanglish; as well as its cultural and literary significance. 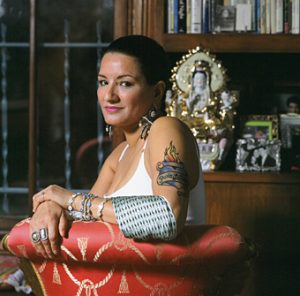 Using examples from the work of Sandra Cisneros and the Chicanx scholar, Cherríe Moraga, Hall discussed the complexity of living between two cultures, including the generational rifts felt by many Latinx families within the US, and the limits of receptive bilingualism. She paid close attention to Moraga’s life differed to her mother’s: as an English speaker, Moraga benefitted from various cultural and economic advantages in comparison.

Looking at the Chicana feminist text Borderlands/La Frontera by Gloria Anzaldúa, Hall gave a detailed analysis of how Spanglish can act as a means of expression for a people trapped in the ‘world of the inbetween’. An expression is undermined by the illegitimacy of Spanglish; an illegitimacy perpetuated by the US educational system and by sympathisers of the English Only campaign, who perceive Latinx culture as a threat to America.

Our speaker dotted her presentation with bits of necessary historical context, which went a long way to help those of us who knew little of Latinx history. To Hall’s credit, these were delivered with brevity, without interrupting the flow of her presentation, and helped embolden Hall’s hopeful conclusion: indeed, code-switching can be seen as subversive act, and by continuing to use Spanglish in literature, these female Latinx writers’ voice and cultures may eventually claim their withheld legitimacy.

Since Hall’s presentation, the Transatlantic Literary Women Series has been in full swing. As well as the aforementioned book club, the series also ran an Edith Wharton Workshop in early October: an afternoon devoted to covering the author’s work in context, modernism, her feminism, her contemporaries, race, taste and design. Along with a quiz, film excerpts and the big reveal of the workshop’s Wharton writing competition winner, the event also featured talks by the Series’ own Dr Rattray; writer and lecturer, Ailsa Boyd; and PhD candidates, Katie Ahern (University College Cork) and Anna Girling (University of Edinburgh). More information about these speakers and their presentations can be found in the workshop programme, here. 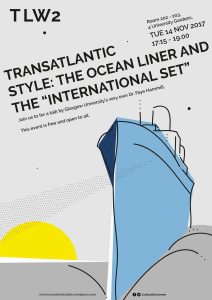 The Series’ most recent event, held on 14th November, was a paper by Professor Faye Hammill. Having worked at universities around the UK throughout her career, Hammill is now Professor of English at the University of Glasgow. She specialises in early twentieth century literature and print culture in the transatlantic frame, and has authored six books to date – the most recent of which was Modernism’s Print Cultures (2016).  Her paper, ‘Transatlantic Style and The Ocean Liner’, focused on the globalised style that emerged during the heyday of liner travel. Through a detailed account of the ‘international set’ (‘a loose grouping of prominent society and artist figures who met one another frequently on voyages and in fashionable resorts during the interwar years’) Hammill explored the development of this transatlantic style in the literary and visual forms of the era. She drew on an impressive array of sources during the presentation while paying particular attention to Anita Loos’ Gentlemen Prefer Blondes, analysing how the heroine, Lorelei Lee, navigated this ‘set’.

Hammill began with three quotations each taken from the authors, Ethel Wilson, Rebecca West and Osbert Sitwell. She used these to effectively summarise how this mode of transatlantic travel was presented in contemporary writings: a paradox. While the liner symbolised a means of escape from everyday life, Hammill argued that the physical ship acted as a socially claustrophobic and inescapable space. A space in which the close personal proximity and interaction with other guests made transatlantic travellers highly visible and vulnerable to others’ scrutiny.

The presenter further dissected this artificial social set-up, drawing attention to the interior of the liner. The Ritz was key to Hammill’s thesis, here. She explained that the hotel chain had, by this point, begun to open restaurants on the ships. Drawing once again on the exploits Lorelei Lee, she affirmed that the transatlantic style did not generally evolve from a love of travel and exploration, but rather the desire for upper-class uniformity as they move from one Ritz to another. This went to illustrate how the international set were concerned with the more superfluous details transatlantic liner travel. A mode of travel, Hammill concluded, that gives an impression of tedium, not luxury. 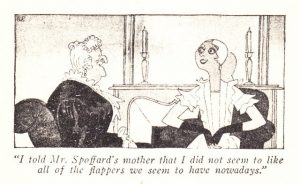 In a similar fashion to Hall’s presentation, the Q&A session at the end of Hammill’s paper happily evolved into a conversation, giving time for various members of the audience to share their personal research and opinions. This all went to show the audience’s desire to delve deeper into some of the topics touched on in the presentations, but also seemed to best showcase both Hall and Hammill’s passion for their subjects. Subjects very different from one another, proving the breadth and scope of the Transatlantic Literary Women’s Series, and together serving to beautifully illustrate the purpose behind the organisation itself: to explore and break down cultural boarders within the transatlantic sphere.

Thus far, Season Two has been a success. And as the anniversary of women’s suffrage approaches, the series will be continuing to host other exciting events. More information about these upcoming events can be found on the Transatlantic Literary Women’s website. A full transcript of Dr Hall’s speech can be found on The SALSA Collective’s website, here.

Panel Review: 'Pop Cultural Interventions' BAAS Annual Conference 2021 (Online)
Review: Transatlantic Symposium, Transatlantic Literary Women Series
Book Review: The Politics of the Body: Gender in a Neoliberal and Neoconservative Age by Alison Phip...
Book Review: The Rise of the American Conservation Movement: Power, Privilege, and Environmental Pro...
The Best of 2016, and What's next in 2017
Queer Clout – Chicago and the Rise of Gay Politics by Timothy Stewart-Winter
Reflection on 'Responding to Sexual Violence in Higher Education – Organisations, Initiatives, and A...
Book Review: The Sum of Our Dreams by Louis Masur