Review: ‘The (Re)production of Misery and the Ways of Resistance’ American Studies Association Conference

In what ways do we think about our bodies as active agents or passive recipients? How do we use misery as a form of resistance, and in what ways can resistance be subversive? How do we teach these issues in the classroom? These are a selection of the challenging, but enthralling questions delegates encountered at this year’s American Studies Association annual conference in Toronto, Canada. The conference’s theme of ‘misery and the ways of resistance’ led to interesting discussions on how the black/queer/Native body move through spaces. Specifically, how definitions of identity can affect our performances, particularly in the ways individuals challenge the dominant power.

In the panel, ‘Blackness and the Miseries of Law in the Long Afterlife of Slavery’, it was argued that African Americans are simultaneously within the law and outside of its borders of protection. In either case, there is no protection against the violence men and women of colour face in American society. Angela Davis’ concept of an “unbroken line” of discrimination from slavery until today has resonated throughout history, particularly in the form of police brutality. The viral video of Eric Garner’s death has a deep resonance, especially when we compare it to the scene in Steve McQueen’s Twelve Years A Slave (2013) when Soloman Northup is strung up by his neck and left to hang while plantation life goes on around him. Garner was treated as though he was enslaved; he was denied both the protection of law and a personhood that was legally granted in 1865. Similarly, the case of Marissa Alexander was also discussed at length. It was used to consider how black women face legal and extra legal challenges when they are forced to defend themselves. Anderson’s defiance and Garner’s death not only disrupt the fabric of society, but also demonstrates the power of public protest and calls for social justice. Institutionalized racism is endemic in the American system, and the panelists raised interesting questions on the relationship between the legal citizen and citizenship. 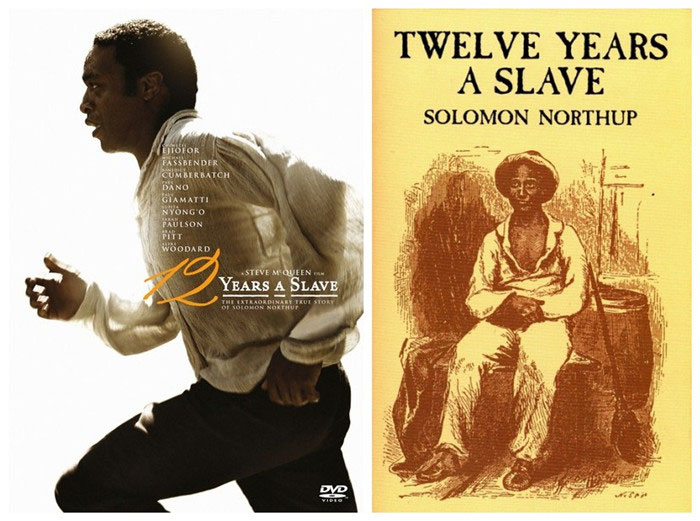 Teaching ‘misery and resistance’ was debated in most panels. Attention was particularly paid to the difficulties of interpreting tense, violent, and uncomfortable subjects to students. This was poignant in the panel, ‘Teaching with Tension: Post-racial Rhetoric, Resistance and Reality in the Classroom’. Here, Lee Bebout (Arizona State University) outlined his experience of teaching critical whiteness studies, discussing how a media storm bemoaning an ‘anti-white course’ led to both death threats and protests by neo-Nazis on campus. This illustrated that any course addressing white supremacy or challenging whiteness to be anything but ‘innocent’ and ‘pure’ does not fit with the (white) racial order. But how should this be taught? Professor Bebout gave a compelling argument in which he stated the classroom should not be a safe place. Students should feel and confront their sense of discomfort concerning racial issues, and they should be open to that vulnerability. Discussions arising from these topics concerned the teaching of black rights, human rights abuses, and police brutality cases in the UK. These were grounded as volatile issues that need to be taught using tools with which students can both interpret and confront history. ‘Re/Producing Ferguson in Europe: Protest Movements from the Streets to the Classroom’, took this further by contrasting the effect of police brutality cases in the United States with those of Europe, particularly Germany and Austria. Since the nineteenth century, African American activists have travelled to Britain to participate in a transatlantic spirit of protest against racism and police brutality. In 2015, these activists protested the deaths of Mike Brown, Eric Garner, Mark Duggan, Sean Rigg and Jimmy Mubenga.

The roundtable events embodied this multifaceted approach to the theme by focusing on subjects from queer marriage, to the use of the term ‘R*dskins’ in sport. Scholars debated the history of this racial slur and its persistent use in the sporting world, as well as other racist American Indian mascots for sports and college teams across the United States. Dr James Fenelon (California State University) argued the refusal to understand the slur symbolized America’s long history of genocidal policies towards Native American peoples. America continues to deny this history and subsequently employs collective amnesia to ensure debates around land rights, sovereignty and cultural repression are dismissed. These racist icons represent a form of racism that has not been understood or dealt with.

Another roundtable focused on the ‘North Star Experience’ in Illinois, where audience members can ‘play’ a slave. The panelists discussed what it meant to take on this role, and the limitations of it. The desire to focus on the passivity of a slave rather than their fugitivity and resistance provides a deeply skewered vision of the enslaved population. The lack of black agency was an important and resonant subject, and was closely tied to the overall conference theme through the exploration of the ways in which the black body is taught, performed and interpreted. The Q&A session proved incredibly interesting, prompting all delegates to consider limitations of empathy, and the false impression of Indiana’s role in slavery in American history. 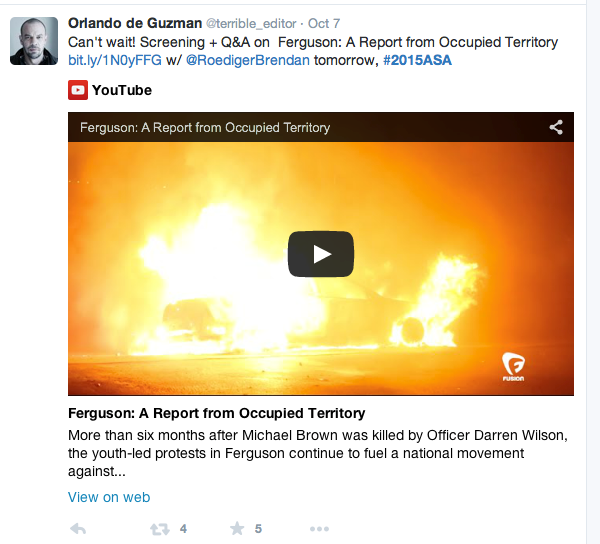 Director Orlando de Guzman tweeting about the screening of his film, ‘Ferguson: A Report from Occupied Territory’, at the ASA conference

The evening events were particularly thought-provoking, and four in particular stood out. The presidential address on Friday night by Professor David Roedinger (University of Kansas) focused on solidarity, and the ways in which it has manifested itself through degrees of oppression. Professor Roedinger talked about protest movements such as #BlackLivesMatter, and its reverberation in New Delhi, London and in Palestine. Two films, continued this theme, the first of which was Ferguson: A Report from Occupied Territory, (directed by Orlando de Guzman, 2015). It is a series of interviews with black residents from Ferguson, a year after the murder of Mike Brown. It specifically refers to the social, political, historical and legal issues affecting the black community. The film (which is available on YouTube) was a powerful and gripping take on the horrifying institutional racism faced by the black community in both Ferguson and its neighboring principalities. His Own Home (directed by Malini Johar Schueller, 2014) further localized the issues of Guzman’s film, focusing on the brutal shooting of Ghanaian graduate student, Kofi Adu-Brempong, by campus police. Disabled by childhood polio, Kofi was shot in his own apartment at the university in a racist and heavily militarized shooting in 2010. The film depicted how student grassroots activism kept alive the justice campaign for Kofi.

Together with the last evening’s comedy night with Aamer Rahman, the range of events and panels on offer goes far to showcase the breadth covered by the ASA conference. It provides hundreds of scholars the opportunity to meet and discuss their research on a myriad of interesting subjects. Together, they broaden horizons and give new directions for researchers at every stage of their career.

Review: ‘The “Not Yet” of the Nineteenth-Century U.S.’, British Association of Nineteenth Century Am...
Fargo 1996, Fargo 2014, and the Art of Homage
Memorials and Popular Memory Special Series
“Heeere’s Johnny!”…Again…and Again…: Pluto TV and the Continued Presence of Johnny Carson’s Tonight ...
Book Review: Critical Lives, 'Herman Melville' by Kevin J. Hayes
Book Review: Ecofeminism: Feminist Intersections with Other Animals and the Earth edited by Carol J....
Selling Houses to Buy a Dream: White Diaspora and the Suburbs in Richard Ford's Bascombe Trilogy
Review: Ecology, Economy, and Cultures of Resistance: Oikoi of the North American World

Hannah Rose Murray completed her BA History at University College London in 2011 and the following year, she studied for a Masters in Public History at Royal Holloway University. Hannah started a project on Frederick Douglass in 2012 and after two years research on his impact on Britain, she is due to start a PhD in American Studies at the University of Nottingham in September 2014. Check out her website at - https://sites.google.com/site/frederickdouglassinbritain/
View all posts by Hannah-Rose Murray →
Tagged  African American Culture, Black History, C19, C21, Contemporary Fiction, Cultural History, Politics, Transatlantic.
Bookmark the permalink.