‘The Water-Cure Journal and Herald of Reform’: Understanding Hydropathy in Antebellum America

‘The Water-Cure Journal and Herald of Reform’: Understanding Hydropathy in Antebellum America

This is the second post in a special series exploring and discussing artefacts from a selection of Adam Matthew Digital collections. This article uses primary sources from the ‘Popular Medicine’ collection, which can be accessed here. Adam Matthew is pleased to be sponsoring the second British Association for American Studies Digital Essay Competition. The winner will receive £500 and one year’s access to an Adam Matthew primary source collection of their choice. For more details, including how to enter, visit http://www.baas.ac.uk/adam-matthew-digital-essay-prize/

A highlight of Adam Matthew’s ‘Popular Medicine’ collection is its rich repository of magazines and periodicals. These publications reveal the confluence of two important nineteenth century trends – the proliferation and democratisation of American print culture, and the development and diversification of American medicine and health reform. One of these periodicals was the Water-Cure Journal and Herald of Reform, the foremost publication of the hydropathy movement in the United States. Hydropathy, which advocated the internal and external application of water to the body as a means to promote health, happiness, and longevity, was one of several alternative medical practises which gained popularity in the antebellum United States. These “nature cures” appealed to those wary of the increasingly liberal use by mainstream physicians of vigorous and invasive techniques such as bloodletting and purging. 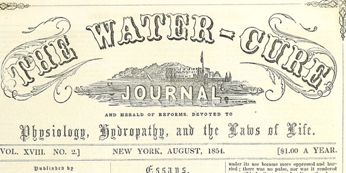 Image from page 26 of “The Water-cure journal, and herald of reforms, devoted to physiology, hydropathy and the laws of life” (1854) (New York : Fowlers and Wells)

Originally pioneered by Vincent Priessnitz of Silesia, hydropathy spread to England in the 1840s, and then across the Atlantic in the same decade. Historians have suggested that the movement found fertile ground in America in this period because of the political, economic, and social changes that were convulsing the nation. According to scholars like Marshall Scott Legan, the stirrings of a new democratic, participatory political culture – often associated with the presidency of Andrew Jackson and with a burgeoning emphasis on the role of the “common man” – laid the foundations for alternative medicines to flourish in America. Citizens seeking medical care believed they had a right to choose the care they received, and to query and reject the conclusions and cures offered by “professional” physicians.[1]

Hydropathy offered a milder, less invasive form of care to the drugs and procedures advocated by qualified doctors. Among its methods were the external application of water through showers, baths, and the “wet sheet” method (in which patients were wrapped in sheets which were soaked in cold water, and then wrapped in a cocoon of blankets to maximise the supposed benefits of contact with water). Hydropaths also prescribed internal application of water, most obviously by drinking copious quantities to cleanse and purify the blood and the internal organs, but also through douches, enemas, and injections of water into the urethra. Through these diverse regimens, hydropaths claimed, the body could be restored to health and vigour and, more importantly, disease and weakness could be prevented altogether.

Edited by Joel Shew, a prominent practitioner who established his first water-cure centre in 1843, the Water-Cure Journal and Herald of Reforms was first published in 1845, and ran, occasionally running into financial difficulty, switching publishers, or changing titles, until 1897. At the height of its popularity, in 1850, the Journal had an estimated circulation of 500,000. A brief survey of just one issue of this journal – here, the August 1848 edition (all references in square brackets refer to vol. 6, no. 2) – helps us to understand the main preoccupations and aims of the hydropathy movement, and how adherents sought to attract converts.

The Journal was anxious to emphasise the integrity, legitimacy, and efficacy of the method it promoted. Editor Joel Shew’s medical qualification – MD – was prominently displayed throughout, and the Journal peppered its pages with ringing endorsements from organs with authoritative titles like the New England Medical and Surgical Journal. The issue also contained lengthy articles on the benefits of the water-cure which reflected the desire of leading hydropaths to secure both public confidence and the social power that scientific legitimation could bestow. One article, for instance, discussed at length the ongoing debate about the benefits of “sweating,” including testimonies and reports on experiments conducted by both physicians and hydropaths [33-38]. 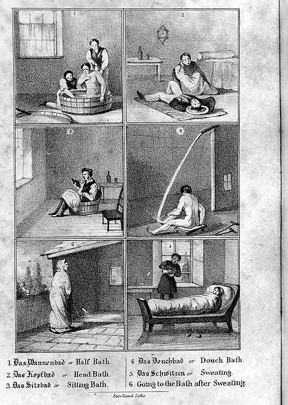 Another lengthy case study explored the use of water therapy to treat a 38-year old woman who had suffered several miscarriages, as well as a spinal condition which threatened her current pregnancy. The article condemned the “cupping, scarifications, burnings, cauterisations, moxas, &c” inflicted upon her by mainstream physicians, and detailed at length the gentler water therapies administered at the Oyster Bay water cure facility. This involved foot-washing, being rubbed all over with a wet sheet at a carefully-regulated temperature, injections of water, baths, as well as regularly imbibing large quantities of cold water. The woman gave birth safely and, the article reported, “is gaining strength rapidly every day,” so that she was soon able to return home with her new child [46-49].

This focus on women’s sexual health – another article in the same issue explored how hydropathy could aid with prolapsed uterus – is significant. According to Susan Cayleff, the movement challenged orthodox medical understandings of women’s nature and physiology, which overwhelmingly focused on the female reproductive system as the source of physical and mental disorders, and of the supposedly innate frailty of women’s minds and bodies. Thus, the democratisation of healthcare represented by the water-cure movement, as well as the scope for the patient to exert control over their own cure and recuperation, presented women with “an alternative philosophy that stressed [their] capabilities, strengths, and potentialities.”[2]

A common feature of the hydropathy movement was the establishment of dedicated water-cure centres, often in rural areas, promising access to pure water, quiet and picturesque surroundings conducive to recuperation and reflection, and the latest technological innovations and modern comforts. The Water-Cure Journal was filled with advertisements for luxurious facilities such as Shew’s own establishment at Oyster Bay on Long Island, which boasted “very numerous and copious springs” of “remarkable purity,” as well as “beautiful roads, groves and shady walks, [and a] fine sand beach winding in various directions” [62]. Other advertisements showcased the wide range of therapies on offer. For example, Dr Meeker’s retreat in South Orange, New Jersey claimed, “a private bathroom attached to each patient’s room…a large douche and swimming bath…three large plunge baths…and two wave baths, one of them from the natural falls of the brook in the ravine” [61]. Hydropaths were anxious to emphasise that their patients could hope to benefit simultaneously from modern technological advancement and the bounties of the natural world.

The water-cure went beyond physical cleanliness and bodily wellbeing, however. Hydropathy grew in popularity concurrently with a spate of reform movements which focused on the body as the key to moral regeneration. Vegetarianism, phrenology, teetotalism – all advanced a code of what Robert Abzug calls “moral physiology” to argue that internal health was key to the collective virtue of the Republic, and indeed to the perfection of humankind.[3] The hydropathic way of life had much in common with reforms such as Sylvester Graham’s regime of systematic exercise, sexual abstinence, and strict, plain diet.[4] The Water-Cure Journal not only trumpeted the benefits to be derived from plain water, but also warned against the deleterious effects of stimulants such as tea, coffee, and tobacco.

Like Graham, hydropaths believed such substances not only damaged the body, but also tempted human beings into licentiousness and immorality, and ultimately led to social ruin. “They bring nearly all the penalties of poverty into the homes of the rich,” the Water-Cure Journal warned, “and spread such a blue, sulphurous, deathly flame over life, that all sorts of diabolism, quackery monstrous theological humbugs are sure to flourish” [43]. The Journal emphasised that the superiority of the water-cure was down to its roots in nature – a nature ordained and created by God. There was almost something baptismal about submitting oneself to the restorative, cleansing powers of the water. As one testimonial claimed, “the rich and the poor, the hale and the weary, all could go to the gushing springs, limpid streams, ‘wash and be healed’” [42].

As the diversity of the articles, testimonies, and advertisements in the Water-Cure Journal suggest, hydropathy was more than eccentric quackery. Its adherents constructed an often radical worldview which encompassed the physical, the psychological, the religious, and the social realms, and which offered a sustained and articulate critique both of mainstream medicine, and of the excesses and social ills plaguing antebellum America.

BOOK REVIEW: HILLBILLY ELEGY: A MEMOIR OF A FAMILY AND CULTURE IN CRISIS, BY J.D. VANCE
For a Series so Concerned with Leaning into the Horror, The Handmaid’s Tale Utterly Fails to Address...
Mirroring the Medium: Depictions of Female Domesticity in ‘WandaVision’
‘Can the Subaltern Play?’ Jazz as Voice in Boston, Massachusetts circa 1910 – 1949
60 Seconds With Rachael Alexander
May Day and the future of workers’ internationalism
60 Seconds With Nick Witham
Folklore and Gay Literature: The Making of a Community

Rachel Williams is a Lecturer in American History at the University of Hull. She is currently working on a book about civilian relief agencies in the Civil War era.
View all posts by Rachel Williams →
Tagged  C19, medicine, popular medicine.
Bookmark the permalink.