Home » Skills development » First experiences » ‘The speed of every incident is unbelievable’: Writer Muriel Rukeyser and the Spanish Civil War

‘The speed of every incident is unbelievable’: Writer Muriel Rukeyser and the Spanish Civil War 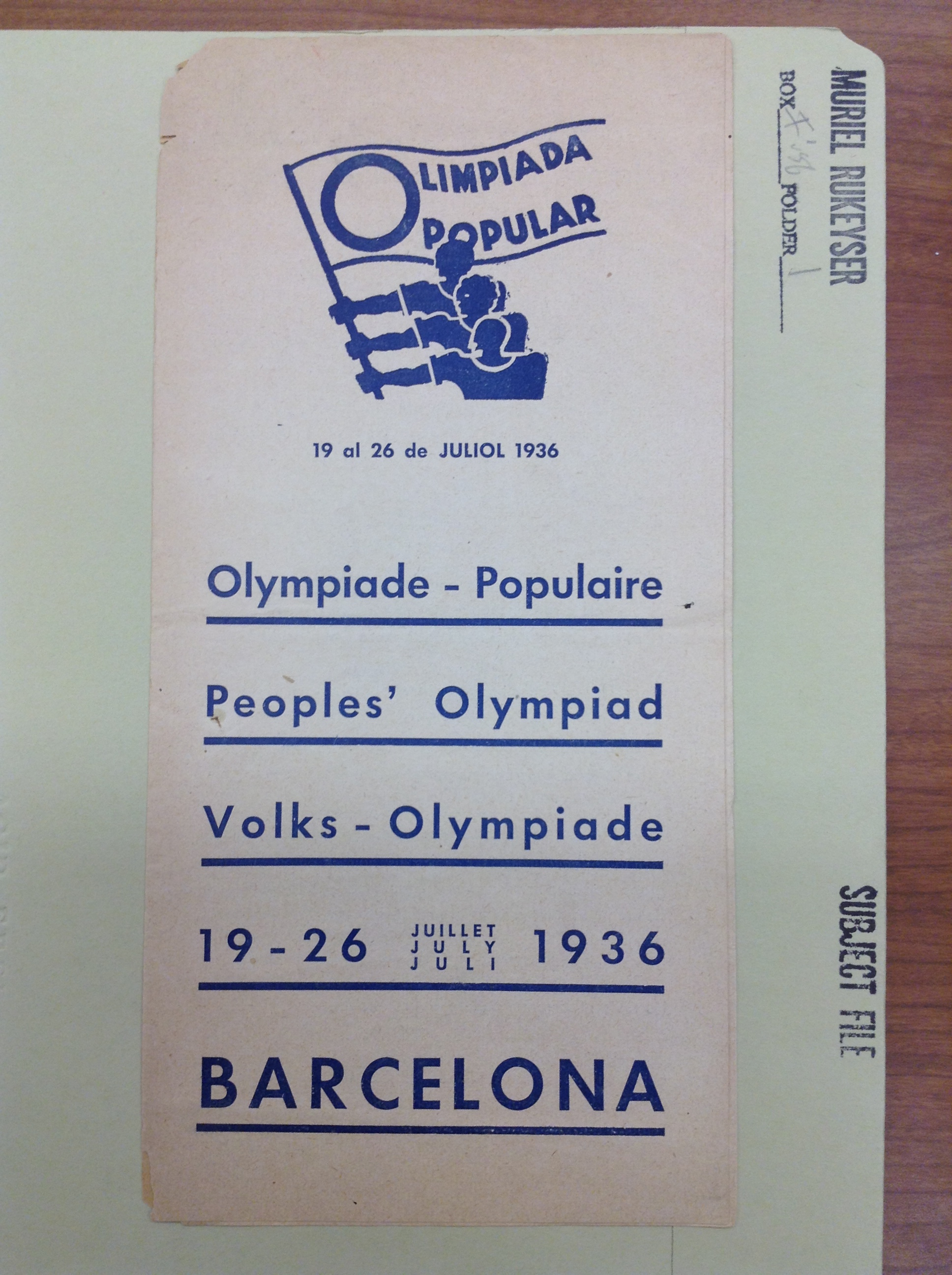 People’s Olympiad from The Muriel Rukeyser Papers, Box I: 56, folder 1.

Having been awarded funding through the AHRC International Placement Scheme, I arrived in Washington DC in early October 2014 to begin research in the Muriel Rukeyser Papers held at the Library of Congress.[1] My PhD examines the ways in which terms like ‘the real’, as well as other ideas of realism, are invoked in the Modernist magazines Close Up (1927-1933) and Life and Letters To-day (1935-1950). Before I arrived in DC, I had written a chapter on Rukeyser and Robert Herring (the editor of Life and Letters To-day), that considered the two writers’ responses to the Spanish civil war, but I felt the argument needed more work. I was keen to begin reading the archive material surrounding Rukeyser’s trip to Spain in July 1936.

Herring had asked Rukeyser to travel to Spain as the journal’s correspondent to cover the People’s Olympiad in Barcelona. Days before the Olympiad was due to begin, the Nationalists staged a coup on the Republican government and the civil war began. Rukeyser was on one of the last trains to approach the Barcelona area. What had been intended as an article on the Popular Front alternative to the Nazi Olympics being held in Berlin, turned into an eyewitness account of the early days of the conflict.[2] 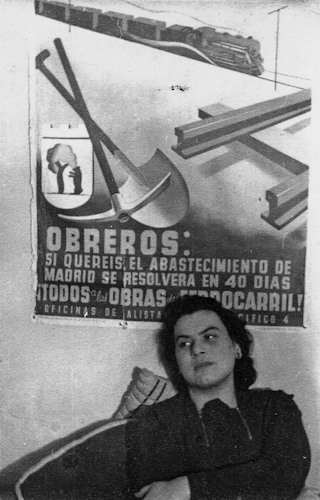 Muriel Rukeyser in front of a Spanish Civil War poster.

Rukeyser went on to write four articles, many poems and a novel about the events she witnessed in Spain. What I find striking about her article for Life and Letters To-day, ‘Barcelona, 1936’, is the pace of her writing:

Two Spanish soldiers, in comic-opera olive uniforms with natty yellow leather straps, patent-leather hats slapped down on top, grin over English cigarettes and the conversation of the Spaniards, deep in political discussions with the Olympic athletes. Catalonians answer “No,” with a swipe of the hand to all questions about the army, “Some on one side, some on the other… Not good to talk.” They are pointing out olive trees, castles, churches. There is time to point out any amount of the landscape. At the little stations, the soldiers stick their guns out of the windows, and armed workers patrol the platforms. This impresses the foreigners.[3]

Rukeyser seems to scan her surroundings, moving between images before they can be developed, to use the photographic metaphor she often favoured.[4] In doing this, Rukeyser erases any sense of a viewing subject: she notes that the foreigners are impressed but she does not count herself amongst them. Even passages in ‘Barcelona, 1936’ that refer to Rukeyser’s actions do not mention her in the narrative. As she wrote in the article: ‘the speed and externality of every incident is unbelievable.’[5] 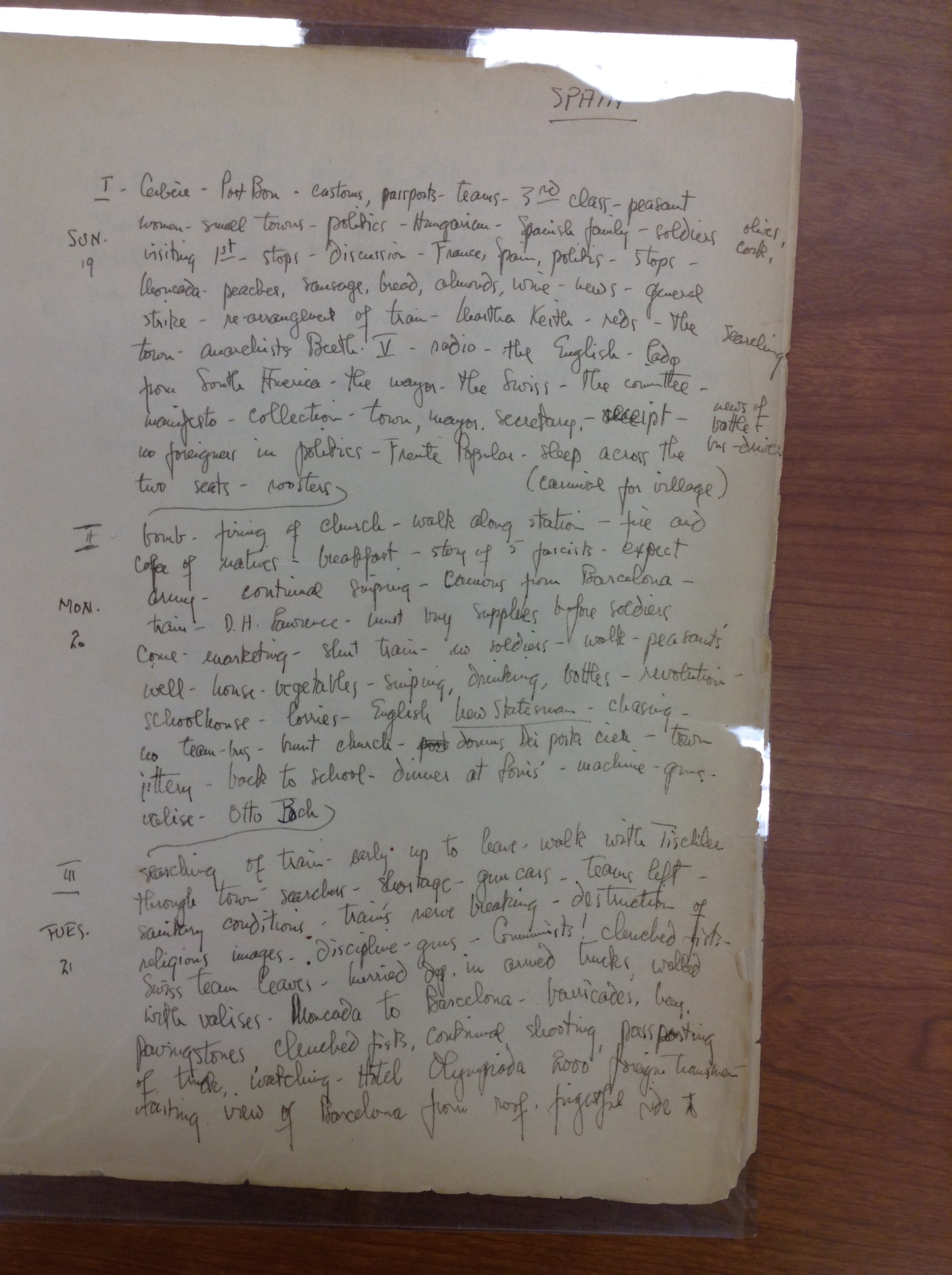 Rukeyser’s diary and notes from Spain at the Library of Congress furthered my understanding of how the article was produced. The sense of speed that characterised ‘Barcelona, 1936’ was even more evident in her diary, which she wrote in short phrases, punctuated by dashes as though she was keen to capture events as they unfolded. As well as her diary, the archive contains lists, maps, sketches and even another passenger’s diary from Spain. I had a sense that Rukeyser had chosen a camera-like aesthetic but the archive revealed just how far Rukeyser had gone to document what she had seen.

When Herring received her article, he was delighted by the piece. Herring, having become politicized by Spain, was concerned that the ‘real’ version of the events of the civil war was not represented in the popular press. He praised Rukeyser’s article as providing ‘the facts of the conflict.’[6] As a quarterly, Life and Letters To-day seldom had breaking news stories and in order to capitalize on Rukeyser’s account, Herring had wanted to place an advert in The Mercury that would read ‘Truth about Spain: Eye-witness account of Barcelona by Muriel Rukeyser.’[7] Rukeyser had captured what Herring considered to be the ‘truth’.

But reading through the archive at the Library of Congress showed just how complicated any notion of ‘truth’ was to Rukeyser. Although the factual style of ‘Barcelona, 1936’ and the diary was what Herring valued, Rukeyser continued to experiment with form as she wrote other accounts of Spain. While Rukeyser focused on the external in ‘Barcelona, 1936’, she wrote herself back into the narrative in her novel about the time, Savage Coast. The original manuscript of this novel is also held at the archive and shows Rukeyser’s corrections, along with a damning reader report from her attempts to get it published. Helen, the Rukeyser figure in Savage Coast, provides an intensely personal version of the same events so that the novel reads like a coming of age story. Throughout, Helen must remind herself that her experiences are ‘real’: ‘[t]he street was dark and furiously real, Helen thought: the night was, all unidentified objects were real’.[8] The novel is still concerned with capturing Rukeyser’s experience albeit in a different way to ‘Barcelona, 1936’.

Rukeyser is seen as a political poet who is able to deftly manage both personal and political material, often treating the two as inseparable. But the archive at the Library of Congress revealed the meticulous work, as well as perhaps the anxiety, that accompanied trying to capture an experience as important as the beginning of the Spanish civil war.

[1] I would like to thank the Arts and Humanities Research Council for this generous funding, as well as The Kluge Centre, where I was based at The Library of Congress.

Sarah Chadfield is an AHRC-funded, third-year PhD student, supervised by Professor Tim Armstrong. Sarah co-convenes the Literature and Visual Cultures Research Seminar, an interdisciplinary forum supported by Royal Holloway, and is a postgraduate representative for the British Association for Modernist Studies. Before beginning her PhD, Sarah was a secondary school teacher and has a continued interest in pedagogy.
View all posts by Sarah Chadfield →
Tagged  Borders, C20, Civil War, Gender and Sexuality, Politics, Transnationalism, War, Women's Writing.
Bookmark the permalink.