The religious life of Malcolm X

The complexity of Malcolm X’s religious life is often overlooked in existing biographical accounts, which present his journey of faith through a series of revelations. However, other sources such as letters and audio recordings reveal a more complex narrative, which problematizes the narrative Malcolm X and Alex Haley present in his autobiography.[1] If we take the main focus of Malcolm’s life to be race relations, it is extremely important to understand his religious journey and conversion to Sunni Islam as this changes his rhetoric on race. An example can be seen in the change of Malcolm’s ideology; from demanding a separate state for African Americans, to accepting the principle of ‘Universal Brotherhood’. Many biographical accounts aim to reconstruct the life of Malcolm X in a bid to ‘humanize’ him, by focusing on Malcolm’s turbulent childhood, which would lead him to a promiscuous drug-fuelled life.  The transformation of Malcolm Little to Malcolm X highlights major changes in his life, however many biographical accounts fail to mention a spiritual experience as such. Rather we see Malcolm Little gain an education and develop his debating skills enabling him to better challenge racial inequalities and carve out an identity and sense of belonging for himself. The main appeal for the Nation of Islam (NOI) then appears to be the challenge it presents to the racial hierarchy within the United States rather than its Islamic teachings. The fact that Malcolm X demonstrated an interest in Sunni Islam whilst a member of Elijah Muhammad’s NOI is often overlooked.   Thus this article will explore the importance of Malcolm X’s religious journey in shaping his changing ideology on race relations.

Malcolm Little grew up in a family where both parents were vigorous activists in the Universal Negro Improvement Association (UNIA), which championed the cause of repatriation and separatism; Malcolm would often attend the numerous speeches his father Earl Little, a Baptist preacher, would give in support of the organisation.  Marcus Garvey’s movement found favour with African American communities in the urban North. UNIA teachings permeated African American communities and formed the basis of the NOI’s formative doctrine preaching ideologies, such as black pride and separatism. Thus scholars such as DeCaro suggest Malcolm accepted NOI theology more readily as he was exposed to it as a child[2]. Malcolm’s travels and the constant testing of NOI boundaries, as well as his creation of the Muslim Mosque Inc. (MMI) and the Organisation of Afro American Unity (OAAU), indicate he wanted to direct the NOI towards Sunni Islam.

Religion is next mentioned in Malcolm’s autobiography when he is referred to as “Satan” while serving a lengthy jail sentence for burglary. Up until this point it is thought Malcolm was an atheist but anger at his jail sentence caused his frustrations to be directed at a God.  As Manning Marable states ‘he had never been particularly religious but now concentrated his profanities against God and religion in general.’[4]  It was also during this time that a previously atheist Malcolm Little found a religion he identified as Islam through the NOI and Elijah Muhammad. Even this connection to religion was heavily embedded with critique of the US racial hierarchy. During this period of his life Malcolm’s racial ideology was heavily embedded with NOI theology, as Malcolm wanted a separate Nation for African Americans believing that they could never live in unison with white people. As we later go on to discover in his autobiography, Malcolm X becomes more aware of the religious differences between the Nation of Islam and Sunni Islam.  An example can be seen in the form of Elijah Muhammad’s story of ‘evil scientist’ Dr Yacub, who was responsible for creating the white race as a race of devils. Despite Malcolm being presented as mesmerised by Elijah Muhammad, often dismissing rumours circulating about the Nation’s leader, Malcolm does not fight the teachings of Sunni Islam. Instead, we see Malcolm trying to implement them within the Nation along with Elijah Muhammad’s son Wallace Muhammad, as both ministers teach members how to perform Salat (prayer) correctly. This often overlooked connection that Malcolm X finds with Sunni Islam is important to understand as it had a considerable impact on the latter part of his life, eventually leading him to change his racial ideology.

Malcolm X was arguably always aware of differences in practice between orthodox Islam and the Nation. He actively read about Orthodox Islam and learned from contacts such as Dr Mahmoud Youseff Shawarbi, who became a close friend of his. As well as implementing orthodox Islamic praying styles, Malcolm constantly pushed boundaries within the NOI, as the discussion of politics was frowned upon within the nation, something Malcolm would fail to abide by and would eventually have him silenced for 90 days. The Nation required members to stop listening to national news channels but rather access information through the nation’s newspaper ‘Muhammad speaks’ alone. Malcolm’s respect for Elijah further fell when he learnt of Elijah’s numerous infidelities. After leaving the Nation, which Malcolm alleged was against his own will, he received threats to his life and safety, none of which prevented Malcolm from furthering his knowledge of Islam. 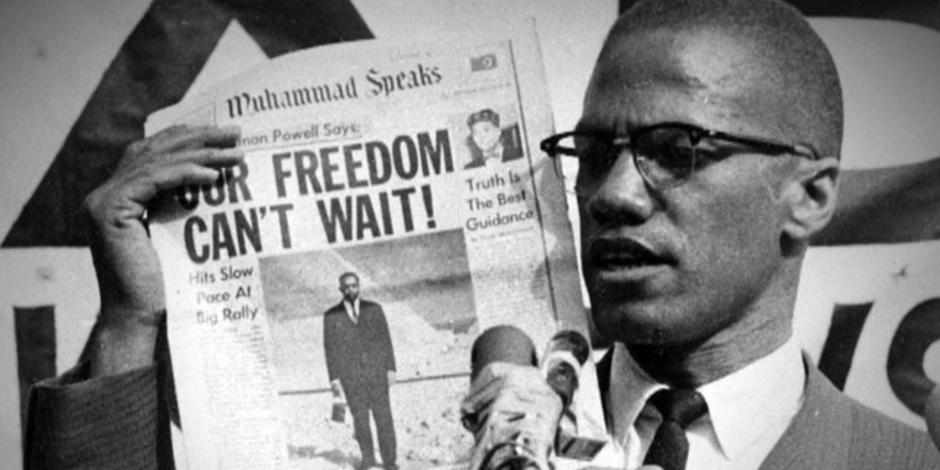 More of Malcolm’s religious life can be discovered in the final years of his life, through his travels to Africa and his pilgrimage to Mecca. Malcolm’s travels were vital in reshaping his views on race relations. During this time Malcolm renamed himself as Malik E Shabazz and his autobiographical accounts show his excitement at being recognised in the ‘orthodox’ Muslim world. An example of this can be seen when Hajj Jeddah Committee leader recognised and registered Malcolm as a Muslim.[5] Although race relations is always depicted as the main focus of Malcolm’s life it is important to acknowledge that accepting Orthodox Islam shaped Malcolm’s view on race relations, in particular his embrace of the universal concept of ‘brotherhood’ represented in Islam. It is here that Malcolm lets go of his previous NOI-influenced ideology on race destroying the notion of separatism. Malcolm went on to set up the Muslim Mosque Inc. which embraced American politics unlike the Nation of Islam, arguably the first step of Malcolm showing his changed views on race relations. Malcolm’s travels show that his target audience had changed; he now wanted to appeal to a worldwide Orthodox Muslim community. Considering the profound impact Islam had on the life of Malcolm X, particularly in shaping his political views and changing his ideology of racism, it is an aspect of his life that needs to be further researched in order to truly understand the religious journey of Malcolm X (Malik E Shabazz), from an atheist to a minister for the NOI to a Sunni Muslim.

Storify of our #bookhour twitter chat on CAPE COD by Henry David Thoreau
War Among All Puerto Ricans: The Nationalist Revolt and the Creation of the Estado Libre Asociado of...
Youth Politics and Dispelling the Image of The Terrible Turk with Selma Ekrem’s Autobiography, Unvei...
Celebrating Neutrality? What We Can Expect from America's Ongoing Centennial Commemorations of the “...
There's No Place like Home: Hillary Clinton and Donald Trump Conquered New York
60 Seconds with Jennie O’Reilly
"Cracking Eggs" in Diana Abu-Jaber's 'Life Without a Recipe' (2016)
60 Seconds with Anna Maguire

I am currently studying History MA at Royal Holloway, University of London. My dissertation thesis will aim to explore the topic of Malcolm X’s religious life and the impact Islam had on shaping Malcolm as a religious, political and cultural leader to many African Americans.
View all posts by Preeti Bath →
Tagged  Black History, C20, Civil Rights, Islam, Malcolm X, Muslims, Politics, Religion.
Bookmark the permalink.