Throughout the Cold War, the United States regularly intervened directly and covertly in Latin American politics. However, from the late 1970s US foreign policy rhetoric began to focus on promoting democracy abroad, and the National Endowment for Democracy was established by Congress in 1983 as an autonomous organisation with the aim of “[creating] new opportunities for democratic assistance”.[1] Although its funding came in the form of a block grant from Congress, the NED board was made up of private citizens with no formal connection to the US government. Before 1988, the Congress did not dictate how the grant was spent, it was to be used in whatever way the NED board saw fit according to their personal and organisational priorities and without reference to short term US-foreign policy. However, in 1988 and 1989 Congress granted the NED two special appropriations specifically to assist democratic movements in Chile’s 1988 plebiscite[2] and in Nicaragua before the 1990 elections.[3] Under the guise of promoting democracy, these appropriations furthered US policy and influence within the two countries. 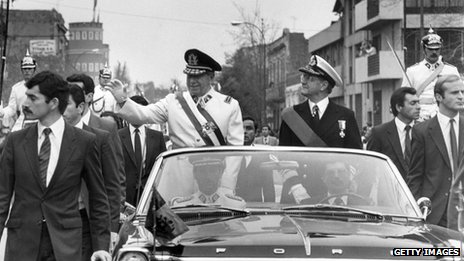 Since 1973, Chile had been ruled by a military junta led by General Pinochet. The 1988 plebiscite was part of the junta’s timetable for transition; if the regime lost, elections would be held the following year. The plebiscite provoked an international response, with foreign governments, including the Reagan Administration, calling for democratic transition and financial and technical aid pouring into Chile from international NGOs and political foundations.[4] However, NED support of Chilean democratic opposition groups had begun before the $1 million Congressional appropriation was granted in 1988. In 1986, the Endowment began providing support to the Central Democrática de Trabajadores (CDT), a small union affiliated with Chile’s Christian Democratic Party, whose strong anti-communist line made it a more favourable candidate for funding than the more influential but militant Comando Nacional de Trabajadores (CNT).[5] Although the American Institute for Free Labour Development, which administered this NED grant, stated that through funding the CDT it sought to “contribute to the restoration of the democratic political structure of Chile[6]”, the funding of this less influential organisation suggests that the NED’s key priorities were countering militancy and building US influence within the centre-right of the opposition movement.

The 1988 appropriation for Chile, although part of a concentrated effort by the US government to distance itself from the Pinochet regime, was the first time Congress had dictated how the NED spent its budget. This caused suspicion amongst NED beneficiaries in Latin America and worry within the grantee organisations through which it channelled funds. The Chairmen of one grantee suggested that the appropriation called the NED’s status as an independent private sector group into question.[7] Similarly, the NED’s president worried that the appropriation would cause controversy in beneficiary nations.[8] Their worries were not unfounded as the sudden involvement of Congress gave the impression of, if not a loss of independence, then at least a strengthening of the relationship between the NED and the US government. In Chile, this made beneficiaries reluctant to accept funding from NED grantees.[9] A member of the Christian Democrat Party suggested that NED funding contained “moral dilemmas” and, while this attitude did not stop opposition organisations from accepting NED aid, it did make it difficult for the NED to find new beneficiaries.[10]

The funding programme was designed to counteract restrictions placed on the opposition including restrictions on assembly rights, harassment and, perhaps most importantly, restricted access to television slots.[11] While NED funding assisted the No Campaign in reaching a wider cross-section of Chilean society and in strengthening the infrastructures of many of the moderate opposition organisations, it also opened the opposition up to criticism from the Pinochet government and anti-US groups (particularly on the left). 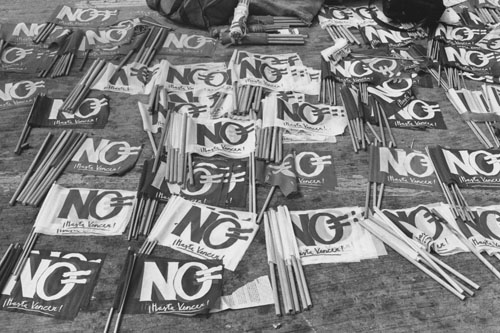 ‘While NED funding assisted the No Campaign…it also opened the opposition up to criticism from the Pinochet government and anti-US groups.’
Image source: http://www.julioetchart.com/portfolio_chile.html

In June 1988, El Mercurio, La Tercera and La Nación criticised the NED’s programmes.[12] El Mercurio accused the NED of interfering in Chilean domestic politics, stating that the assistance was “not a neutral and impartial option to promote democracy”.[13] In addition, the Chilean Ambassador to the US wrote a letter to the House of Representatives which questioned why the NED was attempting to promote democratic values in Chile when that was the purpose of the plebiscite.[14] Thus, the NED’s perceived closeness to the US government allowed the Pinochet regime to paint its beneficiaries as co-opted by foreign aid. Moreover, the close relationship the NED was attempting to build with moderate opposition groups led many Chileans to question its bipartisan commitments.

While the impact of NED funding on the outcome of the plebiscite is difficult to assess, it did alter the power and influence structures within the democratic opposition. Although the funding programme was designed to tip the balance of the plebiscite towards the No Campaign, the NED acted to support broader US foreign policy concerns by helping Washington develop stronger relationships with moderate centre and centre-right Chilean opposition groups before the transition. Democratic transition in Chile was of interest only as far as the outcome benefitted the US and, as a result, the NED channelled money into organisations which were US-friendly over organisations which may have been more effective at promoting transition.

In 1989 Nicaragua, unlike Chile, was undergoing a democratic experiment. The leftist Sandinista government, which had taken power after the 1979 revolution, had held and won international validated elections in 1984; however, it controlled the Council of State, a national council made up of representatives of different political and functional groups, and had a strong influence over Nicaraguan civil society.[15] Since 1982, as part of its anti-communist crusade, the Reagan administration had sought to destabilise the Sandinista regime by funding an armed coalition of Nicaraguan opposition forces, the Contras, to wage an extensive guerrilla war in Nicaragua. Although the US withdrew most of the aid in 1988 after a scandal concerning the illegal methods by which the administration secured funds for the Contras and repeated accusations of human rights abuses, the administration continued to voice support for the Contras and to attempt to discredit the Sandinista government. 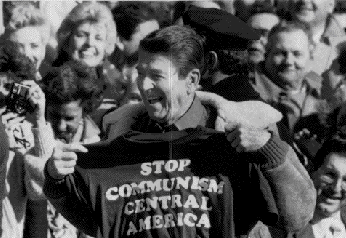 Given the interventionist and aggressive nature of US policy towards Nicaragua in the 1980s, the 1989 NED appropriation appeared to be an abrupt shift; however, it did not mark a policy change but rather a new method of implementing this policy.

Although the 1989 appropriation was modelled broadly on that given for Chile, it differed in several key ways. First, the NED had received $1 million to provide aid in Chile whereas it was given $5 million to provide the same type of programme in Nicaragua, reflecting differences in US priorities in the region. Opponents of the appropriation suggested that this quantity of aid would distort the election process. Unlike in Chile, where political parties had received no direct aid, Nicaragua’s opposition coalition, the UNO, received a large proportion of the appropriation directly. This proved controversial since the NED was forbidden from funding parties or political candidates. To work around this, it never gave the UNO unrestricted cash grants. Instead, it organised education programmes for leaders of the coalition parties, provided assistance to improve communication between parties[16] and funds for vehicle maintenance, salaries and office equipment.[17] These grants were justified with the claim that they were not funding the campaign but rather helping to “[build] party infrastructure”.[18]

Congressional opponents of the appropriation did not believe that the US had a responsibility to assist the opposition further because they believed that by damaging Nicaragua’s economy through prolonging the Contra war, blocking international bank lending and placing a trade embargo on the country, the US had already tipped the balance of the election.[19] Moreover, accusations of NED partisanship were corroborated by the organisation’s long-standing relationship with the UNO presidential candidate, Violeta Chamorro and the NED and the antagonistic relationship between the US government, the NED and the Sandinistas throughout the 1980s. The US had refused to recognise Nicaragua’s 1984 election and, in the mid-1980s, PRODEMCA, an organisation through which the NED channelled funds was found to have openly advocated funding the Contras, while the Sandinistas had repeatedly accused the NED of being a CIA front and of trying to provoke civil unrest to justify US action against Nicaragua.[20]

The primary aim of the NED’s Nicaraguan programme for Nicaragua was to remove the Sandinistas rather than to support free and fair elections. The US focus on Nicaragua during the 1980s resulted in a significantly larger appropriation than that given for Chile and, instead of funding civic education or technical programmes as in Chile, the NED-funded programmes in Nicaragua provided direct aid to the UNO. This direct funding of the UNO coalition, combined with the NED’s close relationships with opposition leaders, suggests that it was operating primarily in the interests of US national security to remove the Sandinista government. 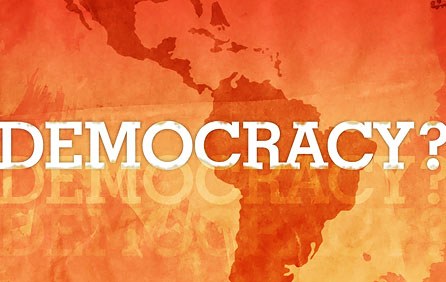 Interventions in domestic politics were ‘under the pretence of democracy promotion’.
Image source: http://www.american.com/archive/2009/march-2009/slouching-to-populism/

The NED’s involvement in these transitions is an example of the US using non-state electoral aid as a foreign policy tool. Both programmes attempted to generate outcomes favourable to US interests by intervening in domestic politics under the pretence of democracy promotion. The partisan approach to aid distribution and the NED’s apparent loss of independence through the appropriations led to distrust of the organisation and contributed to confrontations with local governments. Furthermore, in many cases accepting NED funds hindered beneficiaries by enabling their opponents to paint them as dependent on foreign aid and co-opted by the US. Although, legally, autonomous from the US government, in both Chile and Nicaragua the NED’s programmes constituted a key aspect of US foreign policy. Through special appropriations, the US was able to channel money to friendly organisations and exert subtle influence over the two countries without risking an international incident.

[1] Library of Congress, US Congress House Committee on Foreign Affairs, Authorising appropriations for fiscal years 1984 and 1985 for the Department of State, the United States Information Agency, the Board for International Broadcasting, the Inter-American Foundation and the Asia Foundation, to establish the National Endowment for Democracy and for other purposes, Bill(98) H.R. 2915 (1983), p 87

[4] For information on the involvement of European groups in the plebiscite, see Grugel, Jean “Supporting Democratisation: A European View: European Political Parties and Latin America” in European Review of Latin American and Caribbean Studies, No. 60, (June 1996)

[10] For full lists of organisations funded by the NED year on year see the NED Annual Reports.

[11] For further information on the restrictions context of the plebiscite see Chile: Human Rights and the Plebiscite, An Americas Watch Report (New York: The Americas Watch Committee, 1988)

[15] For further information on the Council of State and the structure of the Nicaraguan political system at this time see Vanden, H. E. and Prevost, G., Democracy and Socialism in Sandinista Nicaragua (Boulder, CO: Lynne Rienner Publishers, Inc., 1993), pp 49 – 71

Mara Sankey is a final year PhD student at University College London. Her thesis, provisionally entitled "Promoting Democracy? The Role of Non-State Actors in inter-American Relations 1980 - 1993", will focus on the involvement of three US-based non-state actors in US policy towards Latin America under the governments of Reagan and George H. W. Bush. Her research interests include, the role of NGOs, political foundations and other non-state actors in US inter-American policy, authoritarian government and democratic transition in Latin America and the role of social movements and civil society in US and Latin American politics.
View all posts by Mara Sankey →
Tagged  C20, Democracy Promotion, Foreign Policy, Media, Obama, Politics, Presidents, Religion, Soft Power, Transnationalism, Whiteness.
Bookmark the permalink.