Home » Research » “The most invisible and outcast group”: Discovering Gay Youth in the Archives

“The most invisible and outcast group”: Discovering Gay Youth in the Archives

In 1989 the U.S. Department of Health and Human Services described young lesbians and gay men as “the most invisible and outcast group of young people with whom you will come into contact.”[1]  Psychologists studying these youths around the same time came to a similar conclusion.[2]Unfortunately, historians have identified that when studying the history of sexuality we have to deal with ‘silences’ in the historical records.[3]

After considering these points any historian who is interested in discovering the experiences of gay youth in the United States must grapple with the question of how you can investigate the history of a people who are defined by their sexuality and have been explicitly identified as being ‘invisible’.

The answer lies in researching the histories of the groups they built for and by themselves.

A place to start looking for these groups is within the historical records of American college campuses. It was here during the second-half of the twentieth century that lesbian, gay, bisexual and transgendered (LGBT) student groups were established with the purpose of promoting and serving their needs. The historical experiences of those once understood to be ‘invisible’ can be found in the stories of creating, nurturing and then institutionalising these groups within campus communities. 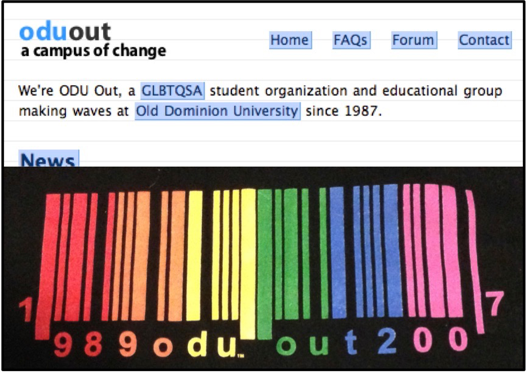 The records needed by historians are likely to be found not in the collective memory of the students, which is weak due to their ultimately transient nature, but in university archives.

The experiences of these groups will be scattered amongst the official record, and in some cases student leaders may have archived their own materials, donated them later on, or had them pieced back together from scraps by later generations.

An example of all of this is Old Dominion University (ODU), an urban college in Norfolk, Virginia.  They had a well-established LGBT student group (ODU Out) by the late-2000s when research was undertaken to uncover their own history.  The group’s collective knowledge about their own history only went back as far back as their longest-serving member’s experience meaning even the date of their founding was unclear. In 2007 they displayed two contradicting dates amongst their advertising materials. On their website the group listed their founding as 1987, but the same year had made up T-shirts for members which listed 1989 as their founding year instead. So which one was it?

The early years of the organisation were actually archived in the ‘Special Collections and University Archives’ department of the Library. The issue of the founding date was resolved in the first folder in the first box of the collection, which contained the original constitution for the group dated 2 February 1989. Delving further, the other boxes contained a trove of resources: posters and flyers the group created, mission statements, newspaper cuttings, correspondence, university papers, documents concerning their involvement with university services, information on campaigns, and details highlighting the opposition they encountered.[4]

These archives told the story of LGBT students on campus during the early-1990s, which, coming in the wake of the HIV/AIDS epidemic, was not sympathetic to LGBT people across the United States. This was exacerbated by the socio-political climate of Old Dominion University’s location. Sited near a military base in the South, its historically conservative student body was primarily commuters from the local area.[5]As evidenced in specific material found within the archival records, a group for LGBT students was not welcomed with open arms. 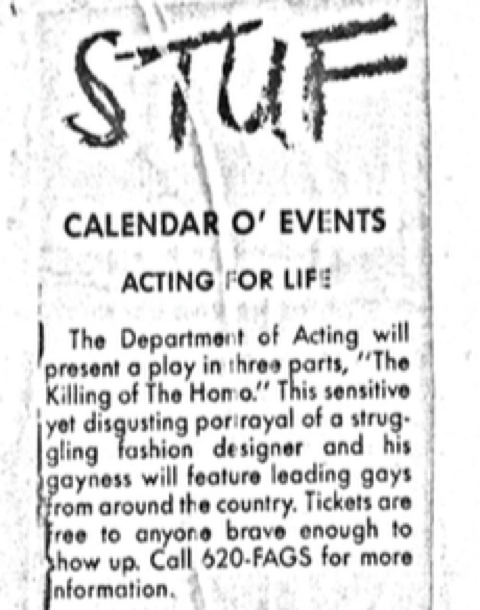 A few months after the group’s founding the on-campus newspaper, The Mace and Crown, ran an attempted satirical issue for April Fools Day, which included a fake advert for a play called, ‘The Killing of the Homo’.  This was described as a, ‘sensitive yet disgusting portrayal of a struggling fashion designer and his gayness.’[6]  When the members of the new Gay and Lesbian Student Union wrote letters in protest citing homophobic language, the editor dismissed their concerns as potentially libelous and stated the majority of the student body would accept the objectionable content.[7]

In 1992-1993 anti-gay graffiti appeared across the campus claiming to be from a group called the ‘ODU White Male Heterosexual Union’. They also distributed leaflets praising how, ‘When Hitler seized power in 1933, he immediately launched a popular campaign to rid the world of fags.’[8]  This time The Mace and Crown, now under a new editor, did not endorse the message, stating instead that such statements were covered by the First Amendment and so cannot be stopped.[9]  That same year a conservative and religious student group sought recognition under the name, ‘The Conservative Student Alliance’ which specifically banned members from being ‘a homosexual or [having] any sort of perverted sexual preference’.[10]  Among its planned activities was a ‘straight coming out day’ and ‘the promotion of family values’.[11]  Citing the discriminatory membership requirement the group was denied recognition by the student government.[12]  In doing so the same body acknowledged the positive impact the LGBT students had had on campus and this marked their increased institutionalisation within the wider campus community.[13]

The experiences of these formerly invisible youths could be re-discovered in these archives, allowing insight into lives previously thought inaccessible. It is by no means the only way to investigate the historical experiences of gay youth, however, it is a useful starting point. It helps to show us how LGBT groups organised to better serve themselves, to unite and identify each other, and provide a supportive environment amongst a hostile social and political context.

[11] ‘Application for Recognition and Classification of a new student organization’, ibid.

Covid-19 Triumphalism in China’s 2020 Docudramas
“The Land Entire Saturated”: Commemorating the Civil War Dead at 150 years
Edward S. Morse: A look at Meiji Japan
"[L]ittle difficulties will get to be great difficulties": Joel Palmer and the Office of Indian Affa...
60 Seconds with BAAS 2017 Conference Organisers
Pills, Politics, and Movie Magic: Big Pharma, the FDA, and the Dallas Buyers Club
R&B entertainers didn't take too long to get involved in the civil rights movement
Review of American Imperialism and Identity Conference

Mark Walker earned his Ph.D. from the University of Essex in 2016.
View all posts by Mark Walker →
Tagged  C20, C21, Gender and Sexuality, LGBT, Politics, Rights.
Bookmark the permalink.