The Maroons of Prospect Bluff: The Free Black Fort of Nineteenth Century Florida

The Maroons of Prospect Bluff: The Free Black Fort of Nineteenth Century Florida

‘On the West side of the Apalachicola River’, the abolitionist William Cooper Nell wrote in 1855, was a fort.

Its ramparts are now covered with a dense growth of underbush and small trees…At this time, the country adjacent presents the appearance of an unbroken wilderness, and the whole scene is one of gloomy solitude, associated, as it is, with one of the most cruel massacres which ever disgraced the American Arms.[i]

This was the ‘Negro Fort’ at Prospect Bluff, one of the most formidable Maroon settlements in the whole of the New World that met its volatile end on 27 July, 1816. The story of these fugitives remains eschewed outside of academic circles, perhaps due to its uncomfortable reminder of the extent the pre-Civil War United States went to in upholding the racial status quo. The free blacks of Prospect Bluff were a prominent example of the unyielding spirit of resistance that runaway slaves who made it to Florida harboured, a tradition that long preceded the founding of the ‘Negro Fort’, and one that extended beyond the fort’s cataclysmic destruction. 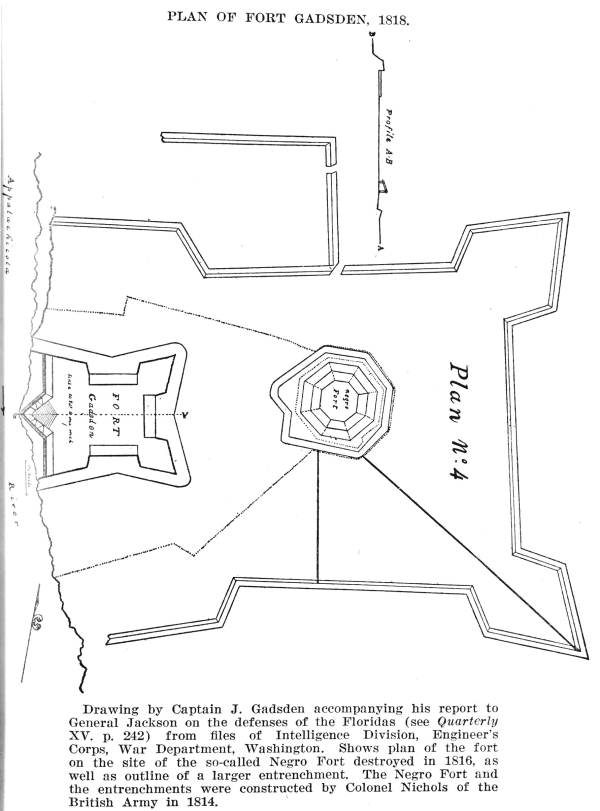 Due to the territory’s hostile environment and a lack of Spanish manpower, runaway Africans from British colonies had, as Jane Landers argued in her study on the black experience in Florida, ‘helped stake Spain’s first claim of exclusive sovereignty’ over Florida in the early colonial period.[ii] This was a freedom that the Maroons of Florida vehemently defended, with the Spanish Crown granting a band of runaways a Fort outside of St. Augustine in 1738, known as Fort Mose. This was to be the first legal free black settlement in what was to become the United States, until its capture by the British in 1763. But like the Spanish, the British soon came to see the Marrons as assets after the American Revolution. The Maroons of Florida were seen as an important destabilising tool against the seemingly fragile new republic, thus they were well supported through to the War of 1812. In that conflict, a fort was constructed between the Indians, free blacks and the English. One that was erected at Prospect Bluff, which was known as ‘the hill of good view’, by the local Spanish.[iii] As the war waned on, British setbacks at the Battle of New Orleans led to a withdrawal of their forces in the south, with their Seminole Indian allies taking to the wilderness to regroup. While recent studies have grouped the Maroons of Prospect Bluff with the Seminoles, the abandonment of the fort by the Seminoles reveals that they were but allies struggling against a common enemy. By 1815, the fort, along with all its ammunition and defences intact, was left to the Florida Maroons.

The ‘Negro Fort’ was unique in the history of Maroon settlements. Rather than purposefully isolating itself in an inhospitable mountain region or in the dense swamps that dotted Florida, the Fort stood only 60 miles south of the border with the United States, along the Apalachicola River which had proved itself as a crucial military supply route during the War of 1812. Furthermore, the fort itself was state of the art, consisting of over two acres of heavily fortified lands, shielding free black villages that grew a variety of crops. The inhabitants of the Fort, dressed in scarlet British military jackets, revelled in their glaring subversion of the racial status quo in the United States. Indeed, this sent shockwaves through white society in the United States. In Georgia, the Savannah Republican newspaper wrote that ‘[They] have done and continue to do mischief to the whites, as occasion and opportunity offer…How long shall this evil, requiring immediate remedy, be permitted to exist?’[iv] The American military were greatly unnerved by the fort and its fiery occupants, with William H. Crawford writing to Andrew Jackson that they ‘cannot fail to produce much injury to the neighbouring settlements, and excite irritations which may ultimately endanger the peace of the nation.’[v] 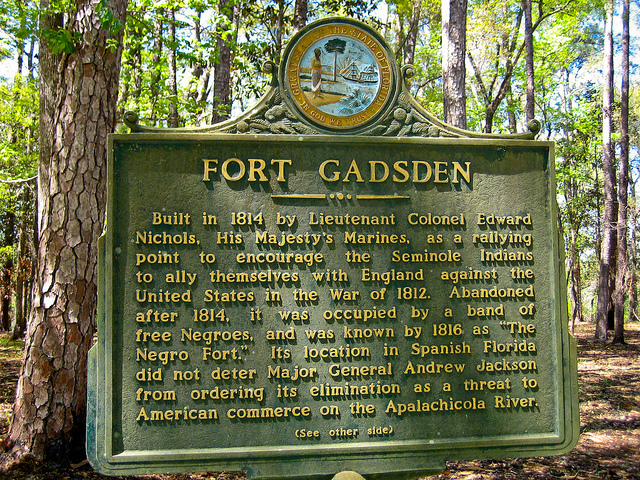 A modern-day marker at the site of the fort. Curiously, the marker avoids noting that the fort’s destruction was due to slavery and instead claims it was to protect ‘commerce’.
Credit: Fort Gadsden Historical Marker, Florida History Network. <http://www.floridahistorynetwork.com/uploads/2/5/3/4/25341746/6624108_orig.jpg?1406466790>, accessed 24 July 2017.

Numbering at over 300, the inhabitants of the fort held out for over a year, refusing any non-English white men to come near the fort, including via the Apalachicola. Their ranks were made up of a variety of skilled former slaves, many of which came from Spanish Pensacola where the opportunities of a slave were more expansive than that available north of the border. These were artisans, skilled in agriculture and manual skills that were required to keep such a society afloat. Sentries guarded the fort at all hours and showed considerable skills with the British muskets that they wielded. Their leader was a ‘French Negro’ named Garcon, who Matthew Clavin has argued may have been from St. Dominque and therefore ‘came of age’ during the Haitian Revolution.[vi] Whether this was the case, we cannot be entirely sure, but the open rejection and hostility to the institution of slavery that surrounded the fort remains a testament to the long history of resistance that defined the fugitives who made it to Florida.

Despite the advantages the fort held, its destruction was quick and catastrophic. In 1816, Andrew Jackson led a brigade down from the United States to Prospect Bluff, accompanied by Creek Indians that were friendly to the United States. Unmoved by the gunboats, the defenders chanted ‘Give me liberty, or give me death!’, before raising the Union Jack and preparing for battle. A back and forth of cannon balls was exchanged between the fort and American gunboats with little effect, until one cannon-shot landed in the fort’s magazine supply, igniting and destroying the fort immediately.  Colonel Duncan Clinch described the scene immediately after:

The explosion was awful, and the scene horrible beyond description…The war yells of the Indians, the cries and lamentations of the wounded, compelled the soldier to pause in the midst of victory, to drop a tear for the sufferings of his fellow being.[vii]

Garcon and some other defenders managed to escape, but were soon captured and executed. There were no white casualties at the battle.

In time, another fort was erected by whites on the site of the ‘Negro Fort’: Fort Gadsden. Ironically, this was to be utilised by the Confederacy during the Civil War. Yet the story of the Florida Maroons does not end here. Remarkably, before the battle a group from the fort had predicted the catastrophe that was to take place and fled south into the wilderness, eventually joining the Seminole Maroons and continuing the struggle for freedom. Survivors of the fort would continue their resistance in the ensuing First Seminole War, and then in the Second Seminole War of the 1830s, a war provoked by then-president Andrew Jackson. While the fort was nothing more than rubble after 27th July 1816, the Florida Maroons could not be completely stamped out.

Beyond the Boundaries of Time and Text: Recovering Oral Traditions in American Women’s Writing
"The Greatest Infomercial in Political History”: A Presidency in the Age of Entertainment
The Alt Right: Trump and Terrorism in the Digital Age (Part One)
Folktales in Randa Jarrar's 'A Map of Home' (2008)
60 Seconds with BAAS 2017 Conference Organisers
Book Review: Familial Fitness: Disability, Adoption, and Family in Modern America by Sandra M. Sufia...
The legacy of Black Power Visual Culture in 1990s Hip Hop
Drama and Cinematic Adaptation: USSO Special Series

Edward Mair is a PhD Researcher at the University of Hull, studying biracial relations among the Florida Seminoles in the period prior to the Second Seminole War (1835-1842).
View all posts by Edward Mair →
Tagged  African American Culture, Black History, C19, Politics.
Bookmark the permalink.