Literary themes are spatially rooted, inscribing the text in ways that are subtle yet profound. This drives us to ask questions. For example, in Truman Capote’s Breakfast at Tiffany’s (1958), does the audience notice New York as much as Holly Golightly? Perhaps not, but where else could Holly live. New York is as much a part of her transgressive identity as her sunglasses and nameless cat. The city frames her narrative, channeling the reader’s perception of the events described in the process. Space and place not only mark literary themes and conceits, but also shape the subjectivities of the characters. Thus, Holly becomes a product of her location, reflecting aspects of Manhattan upon her body and through her assumed identity. This is literally reflected in the title of Capote’s novel, which ingrains the urban ethos of consumerism, the importance of appearance, and conformity. 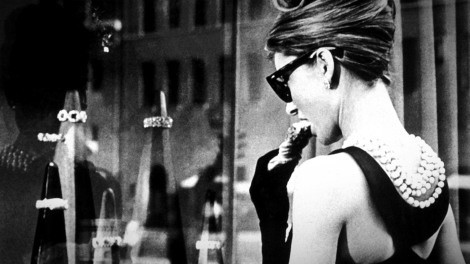 Modern masculinity has shifted in order to fit into a modern city frame. This leaves behind the man in the gray flannel suit and the image of the conformist suburbanite. The new urban man of the late twentieth century has his identity constructed by Manhattan’s rapid commodity fetishism. Like the city itself, his body becomes visible, measurable and displayed. Where cracks in the facade appear, rather than simply breaking, the modern man appears to shatter into a fragmented version of himself. He breaks into madness instead of individuality. In New York fiction and film, the modern male body of the late twentieth century appears as a fractured and fragmented body from Martin Scorsese’s Taxi Driver (1976) to Chuck Palahniuk’s Fight Club (1996). These bodies differ from their predecessors as they react to and mirror the multiplicity of the city space itself, creating selves who are refashioned, hollowed, masochistic and even diseased. The New York male, as this post will explore, appears in the paradoxical position of reflecting his surroundings while rejecting its consumerism and hegemony.

For example, in Martin Scorsese’s Taxi Driver, Travis Bickle’s quest for authentic and ‘good’ qualities on the Manhattan streets leads to his eventual shattering into a pimp terrorist. Manhattan plays a part in altering the normative ex-military persona, foreshadowing Travis’ downfall from the outset. This is represented with dark and rainy streets, seedy cab riders, and a sense of ennui which manifests itself in the regular outings to the local blue movie theatre. Travis’ salvation comes in the form of Cybil Shepherd, or so he thinks. Cybil’s virginal white dress heralds the stark purity of her character against the drabness of the streets. Yet, Cybil’s rejection of Travis results in his rebirth, which is framed by a prophetic comment from his colleague, “you do a thing and that becomes what you are”. This is uttered by his cabbie colleague prior to purchasing several firearms and refashioning the body. The notorious line said by Robert DeNiro “you talkin’ to me”, does not come as a surprise for those with a keen understanding of space and body theory, recognising the potential fracturing of Travis’ exterior identity. Indeed, Travis does not recognise himself in the mirror he is talking to, this is an overt questioning of his self-image. His representation as somewhere between vigilante and lowly taxi driver is further emphasized by the next scene, where the camera focuses in on a diary entry reading “here is…” In the Deleuzian sense, Travis appears to be becoming a Manhattan body, entering into the cyclical relationship with New York and its identity as well as his own. “…the peeling of the face mask shatters any recognisable selfhood the audience seeks to find in Bale’s eroticised body.”

The fracturing of the male self is not unique to Taxi Driver, it is a constant concern for writers in the latter half of the century. Bret Easton Ellis’ American Psycho (1991) is one such example. The protagonist personifies ‘yuppie’ culture in New York during the 1980s. Here, Patrick Bateman is literally his culture. His hollow body is filled with advertisements, MTV, pornography and journalism, and its fetishised appearance stands as testament to the culture. Patrick ‘wears’ these signifiers and they too advertise on him, standing in for a recognisable identity where in fact, there is none. Bateman is a representation of the ‘hardbody’ of the eighties and he and his colleagues at Pierce and Pierce embody an endemic vacuity of Generation X. It is precisely his immersion in this consumerist culture that provides a momentary boundary for a self based on insubstantiality – one which is as flexible and malleable as the changing culture itself. This fluidity is represented by Christian Bale in the film version of the text, where the peeling of the face mask shatters any recognisable selfhood the audience seeks to find in Bale’s eroticised body. Instead, the removal of the mask reveals the absence of a luminous presence within, peeling off one mask only to reveal the same image beneath. As Patrick states,

there is an idea of a Patrick Bateman, some kind of abstraction, but there is no real me, only an entity, something illusory, and though I can hide my cold gaze and you can sake my hand and feel flesh gripping yours and maybe you can even sense our lifestyles are probably comparable: I simply am not there. (362)

Patrick is the ‘ideal’ New York consumer, his mental substance has been entirely erased to make space for commodified messages. He is a product of the city and the personification of the perfect Manhattanite. He only desires his self-image and is thus trapped in the world of superficiality. 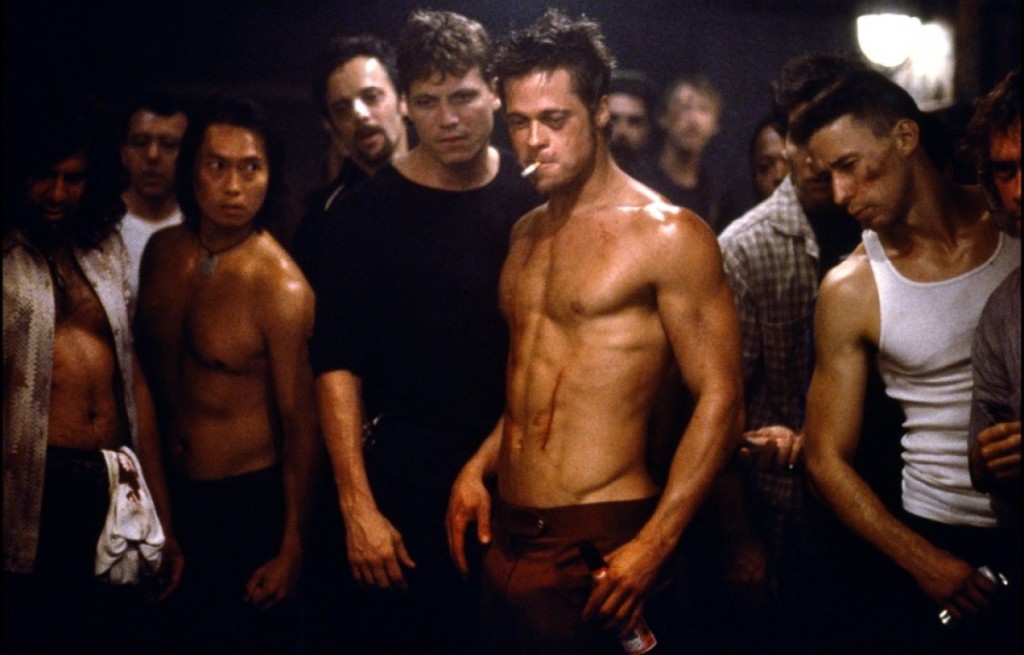 “The only offering of identity closer to desired masculinity is provided by breaking into the underground world of fight clubs.”

Similarly, in Chuck Palahniuk’s Fight Club (1996), Jack’s shattering of selfhood fetishises the male body in order to express anxieties about conformity. We encounter a narrative so disillusioned with city life, where you, “pull a lever. Push a button. You don’t understand any of it, and then you just die” (Palahniuk, p.12). For Jack/Tyler, the main problem for the modern man is his reliance upon consumer goods. The only offering of identity closer to desired masculinity is provided by breaking into the underground world of fight clubs. They seek an escape from the entrapment of Ikea-filled apartments and the dead-end jobs they despise. It is only by creating real bodily pain that they can know themselves, as, “only if we are caught and punished can we be saved” (p.141). Fight Club is the only ‘real’ experience they can claim in the world of so many Patrick Batemans, where physical scarring and marking on the body steps in to create an identity removed from the superficiality of their surrounding culture. Yet, Fight Club is as much a part of New York as Patrick’s vacant self, for Jack/Tyler and the ‘space monkeys’ are a direct reaction against their environment, seeking transgression as escape.

Larry Clark’s Kids (1995) manages to illustrate the most terrifying version of urban masculinity. Here, youths – who can be read as the young Jacks and Patricks – emerge into an adulthood culture that glorifies drugs, sex and alcohol. Telly’s thirst for de-flowering young virgins (sometimes children of 12 or 13 years old) ends in the shattering of masculinity through the modern trope of sexually transmitted disease.  What perhaps is most disturbing for modern audiences is the unrest we feel watching them behave as adults whilst their bodies remain childlike. Much like JD Salinger’s The Catcher in the Rye (1951) child bodies in New York mirror the maturity of the city. The movie upsets the binary of child and adult, and culminates in the shattering of masculinity through the transmission of HIV through both sex with a minor and a rape scene. Ironically, the quest for adulthood ends in the fracturing of identity, both physically and symbolically.

These new Manhattan men illustrate a version of masculinity almost entirely fashioned by the city. It is one which prizes appearance and surface through aggression, promiscuity, violence and visibility. However, despite the explosiveness of these performances, they are hollowed by their surroundings, unable to escape from the inadequacy of the conceptual modern man. Masculinity remains as something worn rather than known. These types of men are frightening precisely because patriarchal society dictates that we must know male from female, you from me, myself from ‘other’ and enforce a known boundary between ‘them’ and ‘us’. However, these selves are unable to be known, for there is nothing beyond the body’s surface to know. This leaves the Patricks, Tellys, Travis’ and Jacks to roam New York without fear of exposure, where their fragmented inner selves are masked by their supposedly conformist exteriors.

Sennett, Richard, Flesh and Stone: The Body and the City in Western Civilization. Faber and Faber, London, 1994

After receiving her English degree, Antonia worked as a fashion journalist before returning to academia, where she completed an MA and PhD in American Literature. Since 2011 she has been an Associate Lecturer at Oxford Brookes University as well as a lecturer at Goldsmiths, University of London. In recent months Antonia received the teaching award at Oxford Brookes and is currently working on her first book - a monograph of her thesis on Cold War spaces and identity.
View all posts by Antonia Mackay →
Tagged  C20, C21, Celebrity, Contemporary Fiction, Cultural History, Gender and Sexuality, Masculinity, Media, The Suburbs, Visual Culture, Whiteness.
Bookmark the permalink.