The Last Time I Saw Richard: Post-Postmodernism and the Contemporary Case for Richard Yates

Ninety years since his birth, a familiar argument recurs in discussions of Richard Yates’s critical underappreciation. It holds that a dedication to a stylistically and formally conventional form of fiction, one preoccupied with the mimetically realist representation of a particular set of social mores and their psychological impacts, placed him out-of-step with the experimental currents of the postmodern period.

On this basis it is claimed that Yates’s failure to ‘ben[d] language into […] new shapes’ and his misfortune ‘to perfect a realistic prose style just as realism was losing prestige and marketability’ marked him indelibly as a practitioner of what John Barth memorably termed ‘The Literature of Exhaustion’ (Castronovo and Goldleaf 6, 28; Barth 62). That such arguments are strongly echoed by Kate Charlton-Jones, writing eighteen years later, is indicative of their solidification into a critical consensus about Yates’s fiction. For Charlton-Jones, Yates ‘missed his time and his mark’ because he wrote ‘social realist fiction’ at a time when ‘literary fashion […] was exciting [and] experimental’ (4). Occupying the same territory, Martin Naparsteck argues that Yates paid a critical price for remaining ‘accessible’, rejecting postmodernist experiments in style and form as ‘get[ting] in the way’ of character and plot (13-17).

The irony common to such readings, which identify Yates’s realism as both the defining strength of his work and the explanation for its historical neglect, is that in attempting to rehabilitate Yates they ultimately deprecate his fictional achievements. The argument that Yates’s reputation suffered because he was perceived as a conventional realist craftsman during a period in which the American novel underwent radical reinvention is surely valid. Yet because the readings I have mentioned all substantially uphold that assessment of Yates’s production even as they argue for its re-examination, they offer only a variation on the very error they upbraid. In selling Yates, these readings sell him short. Specifically, they fail to acknowledge the extent to which Yates’s work does in fact share the textually self-conscious, metafictional preoccupations of his more obviously radical postmodern contemporaries. Jerome Klinkowitz hinted at such a possibility in 1986 (165-166), but it has since been largely drowned out by the case for Yates as the consummate but untimely realist (though the metafictive Yates does resurface persuasively in Leif Bull’s 2010 doctoral thesis).

I do not claim that Yates’s fiction lacks the strong and skilfully-executed realist characteristics, psychological insight or social comment for which it has been noted in established readings. Indeed, what is remarkable about Yates’s texts is precisely that their metafictionality is performed conterminously with that conventionally representational project. The two are integrated—the metafictive discourse never preventing the novels from simultaneously maintaining their integrity and legibility as realist works, and vice versa. Each of Yates’s novels is in effect not one but two, performing in parallel as a text of traditional realism and a text bearing hallmarks of the self-reflexive postmodernism from which Yates has traditionally been distanced.

For example, when Yates foregrounds the theatricality and performativity of his characters’ lives, he comments on the inescapably scripted, authored nature of fictional existence, but the theme continues to speak coextensively to the rigid social codes and tightly scripted notions of normative behaviour in mid-century American society. Thus in The Easter Parade, characters’ behaviour is learnt from films: Emily pouts in imitation of what ‘girls did in the movies’ and imagines her sister’s fiancé Tony ‘just out of camera range’ (313). This framing device is especially intriguing: Emily must cinematise her own performance of kissing Tony, a scene that is already a fiction, by superimposing a second fantasy of filmmaking equipment, another level of fictive construction. In emphasising such nested fictionalities, Yates invokes the widest fictional frame in which these characters perform, that of the novel itself, suggesting simultaneously the performativity of existence in the real world represented by the novel and his characters’ metafictional roles as textual performers inside that representative project. Accordingly, when Howard Dunninger tells the older Emily to ‘stop acting like an actress’, his redundant phrasing apprehends the limitations that arise when fiction demands that textual artefacts perform as humans (431). The quality of performativity in Emily’s behaviour (‘like an actress’) is itself visibly performed (‘stop acting’), in a model of nested performances precisely descriptive of Yates’s fictional characters—textual effects performing as people whose notional existences are themselves (socially) performative.

Another Yatesian theme—the mystifying emptiness of the corporate world and its concomitant tyranny of profession-as-identity—operates in a similarly doubled way, superposing metafiction and social realism. For example, there is a Kafaesque absurdity about Knox Business Machines, Frank Wheeler’s employer in Revolutionary Road: Knox conspicuously does nearly nothing. Frank remarks on gratuitous overstaffing and revels in the ease with which he avoids work and kicks tasks into the long grass (71–77). An abiding suspicion develops that Knox, in its generic anonymity and sheer lack of product, is less a real company than a stage set; it has the unmistakable thinness of fiction. At one point, Frank is even able to conjure into being the presence of a non-existent company department to serve as an alibi for an illicit liaison.  The very name of this department flaunts its fictivity: ‘Visual Aids’ is entirely invisible (88). This is Michael Riffaterre’s ‘fictional truth’: in ‘spurn[ing] referentiality’ (i.e. a physical manifestation) by existing solely as a naming act, the imaginary department paradoxically evades questions about its ‘accuracy’ (Riffaterre 84). 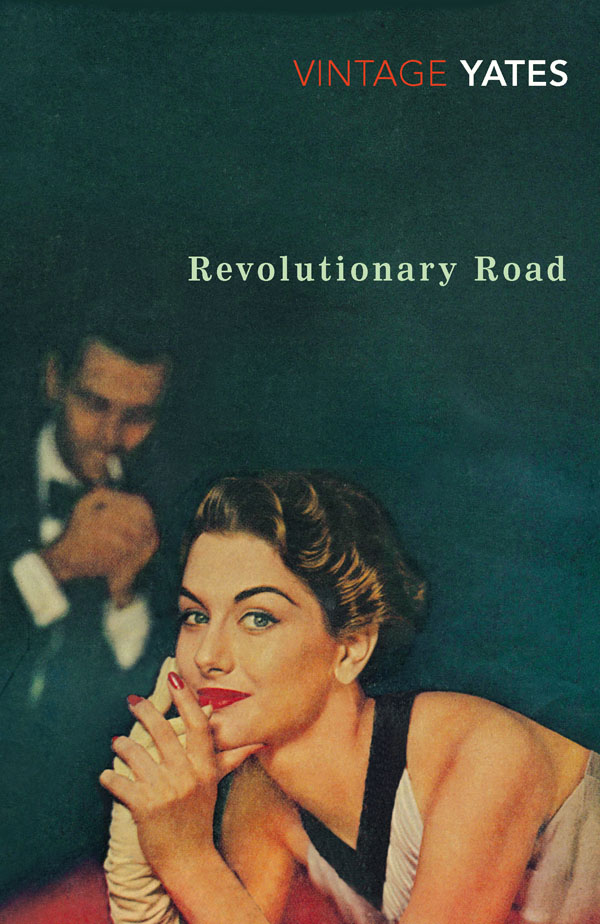 ‘There is a Kafaesque absurdity about Knox Business Machines, Frank Wheeler’s employer in Revolutionary Road’.

Frank, we are told, entered Knox precisely because he believed that a job with little to do would enable him to preserve his sense of self, his true identity (67). The absence of any real work to do in his job, however, only affirms that his pretensions of selfhood are delusional—his identity is assigned by, and runs no deeper than, the text in which his existence is bound. Frank’s real job is implied not to be as an employee of Knox, but as a fictional character who plays the role of a man who works at Knox. Crucially, though, there is nothing in these metafictional readings of Frank’s employment that prevents the complex and conflicted relationship between his selfhood and his mystifyingly empty job from speaking simultaneously to the world outside (and represented by) the fiction. The contingency of Frank’s identity upon his non-job can stand both as a tell-tale sign of fictivity and as a cutting indictment of a real-world corporate culture in which identity becomes predicated upon profession.

It is evident, then, that the metafictional and realist aspects of Yates’s work do not only coexist in the same textual spaces, they articulate and interrogate each other. The textual world which emerges from the metafictional reading—one which seems thinly and unstably fictive, artificial, and ersatz—only furthers Yates’s biting assessment of the real-world American culture that is the mimetic subject of the novel’s realist guise. Yates’s production of this complex dual discourse is, moreover, remarkably pertinent to live critical debates about the contemporary or post-postmodern American novel. Presaged in impassioned mid-‘90s essays by David Foster Wallace, a renewed emphasis on the social, the affective, and ‘realism as the dominant narrative mode’ has become the contemporary ‘critical consensus’ according to Rachel Greenwald Smith. (‘Postmodernism’ 423-4). This is not, however, to be mistaken for a straightforward return to realism. As Greenwald Smith notes, texts which display the very affective, socially-concerned qualities characteristic of the post-postmodern period are often also reliant upon precisely those postmodernist tactics that the affective hypothesis would suggest obstructs affective transmission: metafictional strategies, skepticism toward subjective consistency, and deferral of narrative closure. (424)

Greenwald Smith (along with several other critics[i]) thus suggests that, in post-postmodern fiction, ‘the interest in the materiality of language associated with earlier experimental movements can be retained, even as it merges with an attempt to represent the human subject in a recognizable form’ (Affect 32). In short, post-postmodern novels might be defined by attempts to fuse traditionally affective, realist, and social effects with postmodernism’s formal novelty and experiment within the same textual space.

Anachronistically, this supposed defining characteristic of the post-postmodern novel is precisely the quality I have here identified in Yates’s fiction. This is all the more remarkable given that Yates’s work not only antedates the post-postmodern moment but was supposedly rendered untimely by postmodernism’s own generationally-schismatic genesis. Recognition of Yates’s ‘metafictional realism’, then, does not merely prompt a reassessment of his relationship to the postmodern, but proposes him as a prophetic proto-post-postmodernist. Yates’s seamless embedding of metafictional concerns and self-conscious textuality within novels that simultaneously perform work that is realist, affective and socially-orientated, anticipates by decades the key formal problems confronted by authors and critics of the post-postmodern American novel. Such an assessment raises the curious suggestion that perhaps Yates was neglected during his lifetime not because, as has often been argued, he was behind the times, but rather because he was ahead of them.

[i] For more on the American novel after postmodernism, and in particular the suggestion that the post-postmodern American novel might best be characterised by attempts to meld postmodernism’s formal playfulness and self-reflexivity with the social and affective concerns of realism, see the 2016 essay collection Postmodern/Postwar—And After (co-edited by Jason Gladstone, Daniel Worden and Andrew Hoberek).

Bull, Leif. A Thing Made of Words: The Reflexive Realism of Richard Yates. PhD Thesis, Goldsmiths, University of London, 2010.

Charlton-Jones, Kate. Dismembering the American Dream: The Life and Fiction of Richard Yates. The University of Alabama Press, 2014.

Naparsteck, Martin. Richard Yates Up Close: The Writer and His Works. McFarland, 2011.

Michael Docherty is a first-year PhD candidate at the Centre for American Studies at the University of Kent. His doctoral research focuses on (re)visions of frontier imagery in literary depictions of social and ethnic tension in mid-20th century Los Angeles. Other research interests include metafiction in the post-’45 American novel and the sociocultural history of rhythm and blues music. He tweets at @maybeavalon.
View all posts by Michael Docherty →
Tagged  C20, Contemporary Fiction, post-postmodern, Yates.
Bookmark the permalink.