Federal buried, rebel unburied, where they fell at the Battle of Antietam. Source: Library of Congress records.

April 9th, 2015 marked the sesquicentennial commemoration of the surrender of the General Lee’s Army of Northern Virginia to the Army of the Potomac under the command of General Grant. The surrender sounded the death knell for the shattered Confederacy. Appomattox was no cause for outpourings of joy; the conflict had dragged on for over four years and claimed the lives of over 620,000 American citizens.[1] Proportionately, if the war had occurred during the sesquicentennial years, the number of casualties would be approximately 6.2 million. Some historians argue that the 620,000 figure falls short of the mark, with James David Hacker estimating that the number may be as high as 850,000. As an internal struggle, the vast majority of the dead remain within the nation’s boundaries. Familiar battlefields act as sites for the concentration of their memory, there is no foreign Tyne Cot or Thiepval for this American bloodletting. The sesquicentennial commemorations have caused a renewal of interest in the locations which bear witness to the cost and meaning of the war. View of ditch, which had been used as a rifle-pit at the Battle of Antietam. Source: Library of Congress records. Antietam, Md. Confederate dead by a fence on the Hagerstown road. Source: Library of Congress records.

Whether 620,000 or 850,000, the toll was catastrophic. 1 in 5 white southern men of military age lost their lives and of the 180,000 African Americans serving in the United States Colored Troops, approximately 36,000 died.[2] Gazing at Union casualties as they were ferried away from the Virginia Peninsula, Frederick Law Olmsted claimed that the nation had transformed into a “republic of suffering.”[3] Notions of patriotic duty and masculine courage were shattered in a conflict where the soldier was more likely to perish by disease than from an enemy bullet on the battlefield. In combat, the soldier might be rendered anonymous or have no companion to comfort him in his dying moments. Walt Whitman attempted to grapple with the inescapable and omnipresent spectre of death that pervaded and stained the young republic:

…the infinite dead—(the land entire saturated, perfumed with their impalpable ashes’ exhalation in Nature’s chemistry distill’d, and shall be so forever, in every future grain of wheat and ear of corn, and every flower that grows, and every breath we draw)…[4]

Whitman’s sombre statement testifies to the unprecedented presence of death across the United States following the conflict. The fragmented remnants of the American citizens who struggled in that war permeate and nourish the earth, becoming a part of the physical landscape of the restored Union, consumable by all who would benefit from the nation’s “new birth of freedom.” Paradoxically, death emerges as an aspect both distant and familiar. The experience of dying in a detached sphere was on a scale unparalleled, yet the immortal omnipresence of the dead haunt Whitman’s America. Evidently, both the Federal and Rebel governments struggled to manage the prevalence of dead bodies produced by the conflict. The use of innovative weapons and infrastructural developments, twinned with the employment of outdated military tactics, was deadly. The combination would yield catastrophic results for a nation in which the system for ensuring the decent burial of the war dead was still in its infancy. The tools of war were advanced, but care of the dead was primitive.

The Battle of Antietam in September, 1862, recognised as the bloodiest day in all of U.S. history, gives a melancholic insight into the trauma of battle and the struggle of memorialising the dead.[5] One New York Zouave recalled two decades after the war that, “the mental strain was so great… the whole landscape for an instant turned slightly red.” Whether a true recollection or an exaggerated conjuration of memory, as the vying armies disfigured the ground physically, the soldier had suffered a psychological disruption in his perception of the landscape that would continue to reverberate long after the conflict. Oliver Wendell Holmes, Sr. wrote of the search for his injured son in western Maryland. Traveling through the torn fields surrounding the rural town of Sharpsburg, he observed, “The slain of higher condition, “embalmed” and iron-cased, were sliding off on the railways to their far homes; the dead of the rank and file were being gathered up and committed hastily to the earth.” A relative fortune smiled on those of “higher condition”, there was the possibility that they might be shuttled away by steam and rail. For the majority there was no tender care given. Their burial grounds came to define them. Ditch on right wing, where a large number of rebels were killed at the Battle of Antietam. Source: Library of Congress records. Burying the dead on the battle-field of Antietam. Source: Library of Congress records.

The nation’s borders as they existed during the war still contain thousands of physical and mnemonic references to the conflict. The dead fill the earth, innumerable households carry their ancestor’s artefacts, and American citizens uncover spent projectiles in their back gardens. On the sesquicentennial anniversary of the outbreak of the war, photographer Gregg Segal published the results of his collaboration with Civil War re-enactors to “construct scenes at historic battles sites that have been compromised by development.” These images, with their “unexpected collision of jarring frames of reference” provide evidence of how the wounds of the conflict live on “in the mental terrain even as they are wiped from the physical landscape.” Segal’s portfolio attempts to resurrect the dead of the Civil War in defence of their burial grounds. The re-enactors serve as proxies for the physical forms of the original cast.

The Civil War Trust is a remarkable organisation which fully recognises the importance of preserving Civil War sites. The Trust has saved over 40,000 acres of land since its inception. Two current projects focus on Fredericksburg and Franklin, each a slaughter pen. The battlefields are secular sites of the nation’s heritage that should figure as places of pilgrimage for those wishing to understand the true cost of the contest for Union, freedom, self-determination, and slavery. As President Lincoln noted, “the brave men… have consecrated it, far above our poor power to detract,” but it remains the duty of subsequent generations to ensure the world “can never forget what they did here.”[6] There are always failures in this endeavour, from the hurried work of the after-battle burial details to the encroachment of commercial retailers in the present day. Like many of the momentous subjects the war attempted to resolve, it is an ongoing struggle.

The manner in which we commemorate and memorialise the conflict through these sites is vastly significant, and the subject deserves careful treatment. Civil War memory often proves a divisive agent in American society. As historian David Blight explores in Race and Reunion, a “reconciliationist” perception of the war “overwhelmed the emancipationist vision” in the nineteenth century, but even this lens gave little recognition to African-Americans.[7] With the African-American contributions made peripheral, their true influence as citizen-soldiers, slave-saboteurs, labourers, and spies suffered. With more research into the ethnographies involved and the continued focus on ordinary participants, new studies have been published that allow us to perceive the war as a universal war in which two powerful ideologies clashed on repeated stages across the United States. Many nationalities, races, and ethnicities can look to the Civil War and find their ancestors as actors in the cataclysmic spectacle. 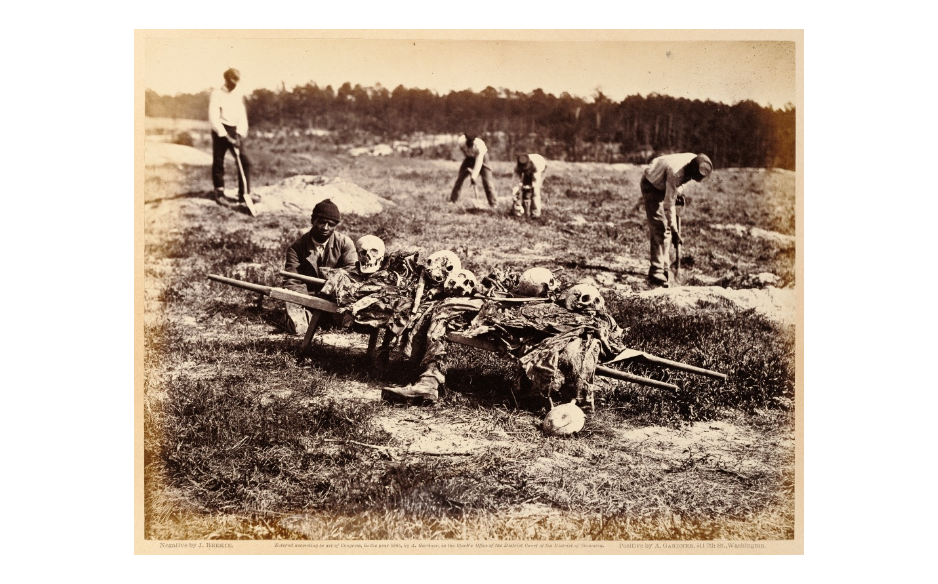 Group of Irish brigade as they lay on the battlefield of Antietam, 19th Sept., 1862. Source: Library of Congress records.

The sesquicentennial commemorations of the Civil War have reignited the public’s interest in the conflict. Historical societies have made their tribute to the common agents of the war, museums have accumulated new collections of artefacts, and politicians have recognised the long unrecognised deeds of soldiers. However, the battlefields will always figure as the focal points for remembrance, memorialisation and quiet contemplation. Civil War veterans flocked to these sites to litter them with memorials, tend to their comrade’s graves, and recognise the actions of the ordinary folk who composed the armies. They attempted to transform the landscapes from spheres of nightmarish suffering and death into sites of poignant memorialisation and learning, refiguring the experiences and memories of the victims of the conflict. Educators, students, and tourists have followed since. It is imperative that the tributes over the past four years do not act merely as a high point in the nation’s remembrance of the war, to enjoy reinvigoration every twenty-five or fifty years, but as a standard measurement of our engagement with the conflict to eventually be surpassed with even greater achievements of preservation and commemoration.

Historians at Play: American History in Modern Board Games
An Assessment of the American Civil War Sesquicentennial
Patient Zero and the Making of the AIDS Epidemic by Richard A. McKay
Conference Review: 'Supposedly Fun Things: A Colloquium on the Writing of David Foster Wallace’
Beyond the Boundaries of Time and Text: Recovering Oral Traditions in American Women’s Writing
"The Greatest Infomercial in Political History”: A Presidency in the Age of Entertainment
Tim Galsworthy on the 2021 BAAS Peter Parish Award
Fargo 1996, Fargo 2014, and the Art of Homage

James Brookes is an MRes student in the American and Canadian Studies department at the University of Nottingham. His thesis focuses on the self-representation of the Union citizen-soldier in the U.S. Civil War through democratic mediums of portrait photography such as the tintype and carte-de-visite. In conjunction with the study of other archival sources such as letters, diaries, songs and post-war memoirs, he hopes to further establish the significance of these common agents and the methods they sought to understand and cope with the catastrophic conflict unfolding around them.
View all posts by James Brookes →
Tagged  Black History, C19, Civil War, Cultural History, Slavery, War.
Bookmark the permalink.