The Indentured Atlantic: Bound Servitude and the Literature of American Colonization (Part Three)

[The British Library Americas Blog and U.S. Studies Online have joined together to publish a series of posts celebrating the Eccles Centre’s Summer Scholars 2015 series. The articles are based on talks given by a range of writers and scholars conducting research at the British Library thanks to generous research fellowships and grants awarded by the Eccles Centre. The deadline for applications for the 2016 awards is 30th January 2016. In a special three part post Matthew Pethers (University of Nottingham) sheds light on colonial working class experiences by examining the often overlooked transatlantic narratives of indentured servants, taken from his talk which took place on 10th August.] 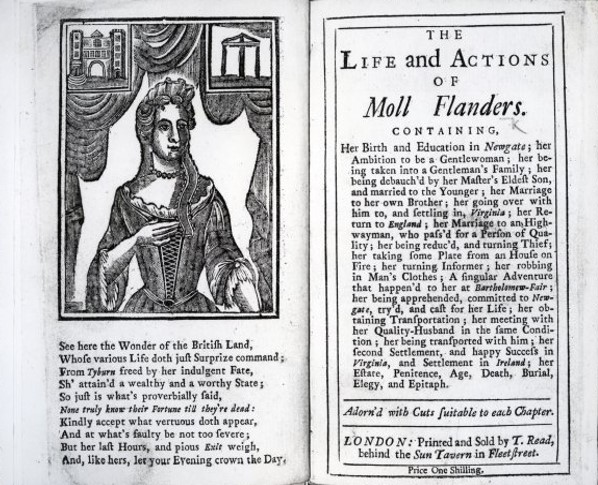 At the end of my last post I suggested that the emphasis on downward social mobility in many colonial-era narratives of indentured servitude can be taken as an indication of how this body of literature was frequently written or directed by individuals from outside the lower orders. In reading the life-stories of fictional servants like Tom Anderson or real ones like Peter Williamson we must be careful to bear in mind the extent to which the increasingly racialized “natural rights” assigned to these figures are connected to and derived from their natal social position. Such language is tellingly less conspicuous in the writings and representations of those indentees who experience poverty before being bound out. Though that is not to say that these texts resisted all the ideological pressures of possessive individualism as it accelerated across the Atlantic world during the eighteenth century. Indeed, while the benefit of using the fallen gentry to sympathetically flesh out the horrors of indenture for a bourgeois audience – and thereby affirm their sense of personal sovereignty – is obvious, the system was also utilized for hegemonic gain through a recurring narrative pattern of rising. Not coincidentally, the literary form in which poor indentees were most often shown ascending to respectability and comfort was the novel, that quintessential eighteenth-century invention of the middle classes. The fact that the fictional stream of the indenture narrative, which runs from Charles Croke’s Fortune’s Uncertainty (1667) to Henry Mackenzie’s The Man of the World (1773), tended to serve a bourgeois agenda is evident, for example, in the stark contrast between the imagined destiny of indentees in these works and the fate of real bound laborers. For while the majority of fictional indentees achieve wealth through their hard work and self-discipline, the upward mobility of actual servants was already astonishingly rare by the end of the seventeenth century. By eliding the various factors that contributed to this social stasis (the westward recession of cheap land, the expansion of African labor, a lack of access to credit), however, indenture novels were able to appeal to the concerns of their core readership: both in modelling the industrious values central to bourgeois self-formation, and in encouraging faith in the financial and moral benefits of Atlantic commerce.

That these emphases also entangled  novelists of indenture in thematic contradictions is inevitable. The best-known fictional indentee of the eighteenth century, the eponymous heroine of Daniel Defoe’s Moll Flanders (1722), is an excellent case in point. It is difficult to think of a more engrossing and humane representation of an ostensibly reprehensible character from this period – for all her vices Moll is lent a complex psychological reality and a fully-convincing set of environmental motivations that the emergent novel-form was perhaps uniquely positioned to articulate. Yet if Defoe’s book leads us deep into the travails of the transatlantic working-classes it equally cannot resist a happy ending. Though steeped in multiple layers of irony, the novel concludes with an affirmation of “how certain it was for industrious People to recover their Fortunes” in America that closely echoes the strident defence of bourgeois principles Defoe presented in his non-fiction.1

If the meticulous first-person renderings of working-class life in the indenture novel ultimately devolve into fantasy, then it would seem logical that turning to the select few autobiographies written by bound servants offers a more straightforward access to social reality. As with some of the other literary genres from which the indenture narrative draws, however, there is also a potential disjunction between form and content here. For while a memoir like William Moraley’s The Infortunate (1743) delivers a compelling account of the  poverty and dislocation that typically afflicted emancipated servants this very failure runs athwart the social narrative that underpinned the development of the early modern autobiography. Emerging out of the emphasis on personal sovereignty and economic self-fulfilment that was central to the rise of possessive individualism, eighteenth-century autobiographies tend to privilege an arc of autonomous maturation that is incompatible with the directionless life-stories of bound servants. Placing indentee memoirs within the larger category of life-writing, in short, exposes some interesting problems for the articulation of working-class selfhood irrespective of the constraints of illiteracy. 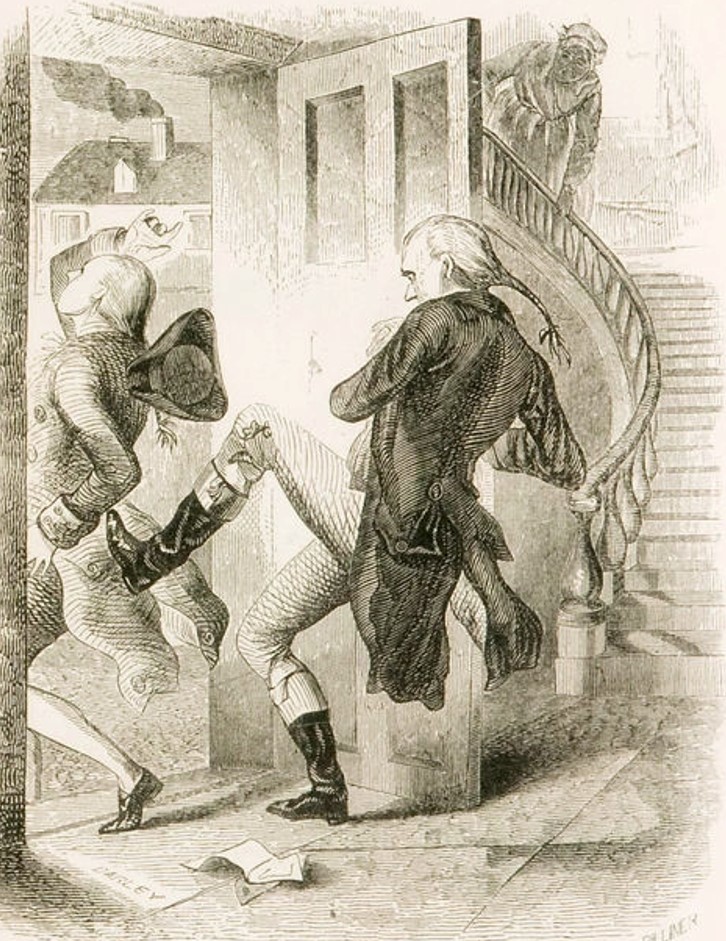 The former indentured servant Teague O’Regan is, like his real-world historical contemporaries, kicked out of the picture, in this illustration from an 1856 edition of Hugh Henry Brackenridge’s comic novel Modern Chivalry (1792-1815).

Consider thus the contrast between Benjamin Franklin’s iconic Autobiography (1771-90) and Moraley’s The Infortunate. In certain respects, Franklin and Moraley share the same reservoir of experience. Both, for example, rebelled against family members whom they were apprenticed to, both arrived in Philadelphia in the 1720s to seek their fortune, and both drew on a nascent American rhetoric of industriousness and meritocracy. Indeed, it is very possible that the two men knew each other, at last in passing, since Franklin was well-acquainted with Moraley’s first master, the Burlington watchmaker Isaac Pearson. But here the connection largely ends. Not only because Franklin is able to transcend his working-class origins in a manner that eludes Moraley, but because the more famous man also understands how to mould his narrative through the characteristic tropes of eighteenth-century life-writing (enlightenment, spiritual endeavour, empirical utility, etc.). Moraley, on the other hand, never finds a consistent tone for his recollections – which often veer off into travelogue and fiction; no doubt because he lacked a consistent inner self (or at least, the pretence to one). “I neglected to improve my Talents, always preferring the present Time to the future,” he tellingly confesses at one point, by stark contrast with Franklin’s personal and literary ability to subsume immediate events for  long-term gain.2 Finding, upon his release from service to Isaac Pearson, that he cannot make a living in America, Moraley returns, with “but one shirt [on] my back,” to England, where his career as “the Tennis-ball of Fortune” only continues.3

Still, for all its pathetic anti-climacticism The Infortunate represents a triumph of sorts, in the simple fact that – “in however rough and homely a Dress it may happen to appear” – it gave voice to Moraley’s experience, and has preserved that experience for posterity.4 That such an achievement defied the historical odds becomes clear if we consider a final category worth adding to those I have delineated across these posts – life-writing’s deleterious counterpart, forgetting. Importantly, to map the contours of the Indentured Atlantic through this lens we must pass by the mundane and inevitable losses of historical evidence mentioned so far and consider how transatlantic working-class cultures have often been prey to active processes of omission. In the case of the indenture system such omission revealingly became almost systematic once the new nation of the United States began to establish itself. Bound servitude was already beginning to decline in the third quarter of the eighteenth century, as competition from slave labor and free labor increasingly rendered it economically unviable, but what really sealed its demise was the American Revolution, which not only cut off the colonies as a destination for British convicts, but instituted an official ideology of independence and equality antithetical to white “slavery.”

Accordingly, then, the Founding generation launched a concerted effort to rewrite the nation’s colonial past. Despite the fact that tens of thousands of indentees had been imported into Virginia and remained there, for instance, Thomas Jefferson dismissively remarked to the philosophe Jean Baptiste Meusnier in 1786 that “I do not think the whole number sent would amount to two thousand, and being principally men eaten up with disease, they married seldom and propagated little.”5 Jefferson was at least correct, however, in adding that “I have no book by me which enables me to point out the date of its commencement,” for he would have had difficulty finding such a public record.6 Examining histories of America written during the eighteenth century, and especially after 1776, throws up a wealth of evasion and elision when it comes to the question of indenture. Indeed, when bound servants do appear in post-Revolutionary texts they are often figured as alien and irrational presences, eruptions of the historical unconscious; a tendency that perhaps reaches its apogee in novels like Charles Brockden Brown’s Edgar Huntly (1799), with its sleepwalking Irish felon-servant Clithero, and Hugh Henry Brackenridge’s Modern Chivalry (1792-1815), with its socially anarchic Irish indentee Teague O’Regan.

The tricky challenge that the Indentured Atlantic presents to scholars is to recover, as far as is possible, the reality of bound servitude while navigating and comprehending the multiple ways in which this reality was articulated, ignored, appropriated, and imagined as part of a diverse range of social, political, economic and racial agendas. The eight dialectical categories and concepts I have broadly sketched out in these posts – singing, ventriloquizing, captivities, slaveries, falling, rising, life-writing, and forgetting – offer one chart for my ongoing research, and perhaps for that of others. But they can surely be joined by others. The Indentured Atlantic, hopefully, will flow on.

Best Of the Web: Black History Month Must-Reads
Emily Dickinson and the Nineteenth-Century Women Poets: The Poetics and Politics of Reticence
Katherine Anne Porter: The Travel and Fiction of a “Roving Spirit”
BAAS PGR Conference Review 2018
MA Graduate Teaching Assistantship Award in Southern Studies at University of Mississippi: Lily-Pear...
“Be Curious, Not Judgemental.” Influences of Positivity and Kindness in Ted Lasso
The Stettheimer Dollhouse: A Life and Salon in Miniature
More Bang for Your Buck: Teaching Nuclear History

Matthew Pethers is an Assistant Professor of American Intellectual and Cultural History at the University of Nottingham. He has published widely on eighteenth- and nineteenth-century American literature, history and print culture, including articles in Early American Literature, History of Science, and American Studies, and book chapters in John Neal and Nineteenth-Century American Literature and Culture (Bucknell University Press, 2012), The Materials of Exchange Between Britain and North East America, 1750-1900 (Ashgate, 2013), and New Directions in the History of the Novel (Palgrave, 2014). He is currently co-editing The Edinburgh Companion to Nineteenth-Century American Letters and Letter-Writing, and has a chapter on indenture narratives forthcoming in The Cambridge History of American Working-Class Literature.
View all posts by Matthew Pethers →
Tagged  American Working Class, C17, C18, colonial America, Colonial era, History, Transatlantic.
Bookmark the permalink.