The Indentured Atlantic: Bound Servitude and the Literature of American Colonization (Part One)

[The British Library Americas Blog and U.S. Studies Online have joined together to publish a series of posts celebrating the Eccles Centre’s Summer Scholars 2015 series. The articles are based on talks given by a range of writers and scholars conducting research at the British Library thanks to generous research fellowships and grants awarded by the Eccles Centre. The deadline for applications for the 2016 awards is 30th January 2016. In a special three part post Matthew Pethers (University of Nottingham) sheds light on colonial working class experiences by examining the often overlooked transatlantic narratives of indentured servants, taken from his talk which took place on 10th August.] 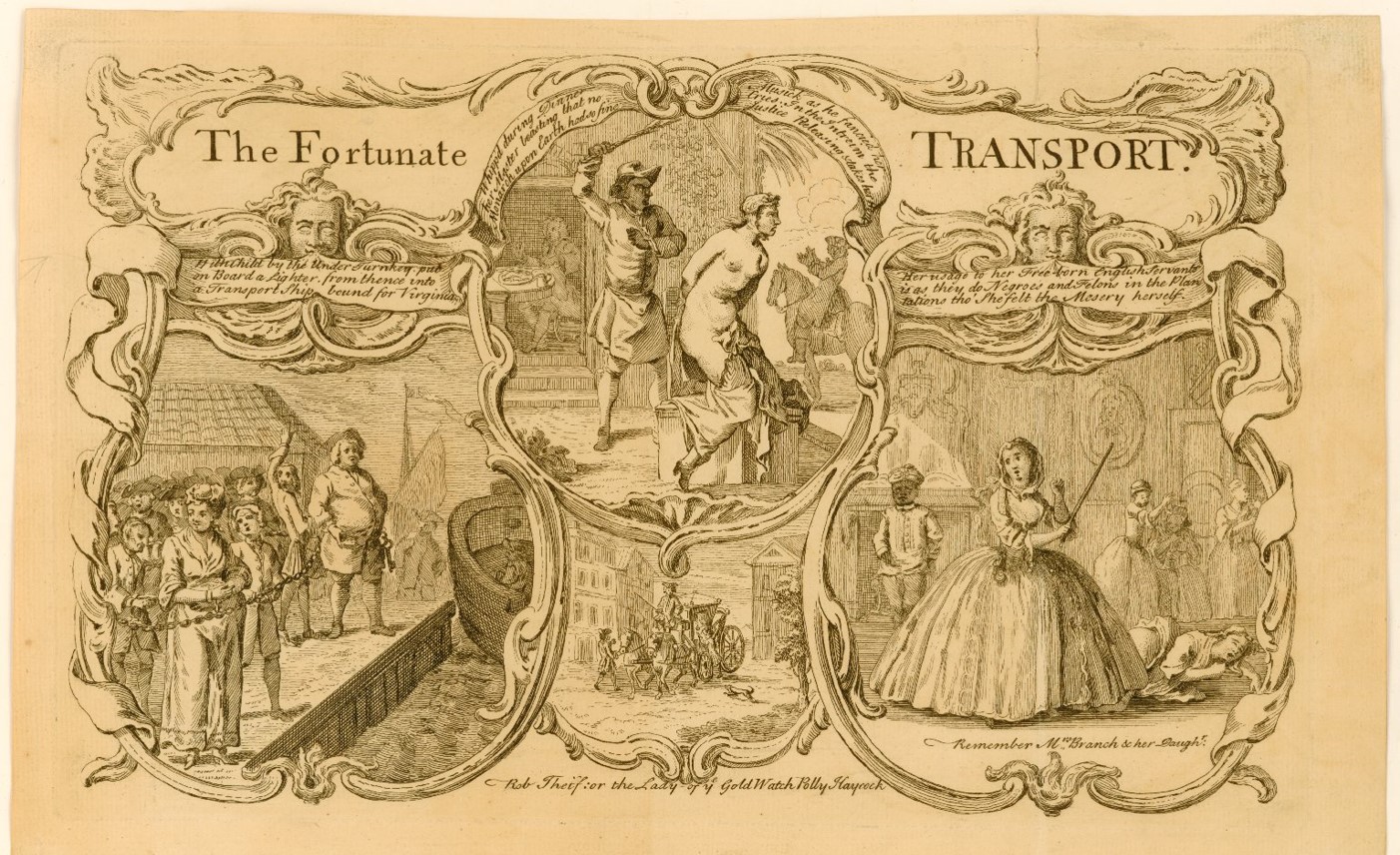 “The Fortunate Transport “(c.1770), based on The Fortunate Transport; or, The Secret History of the Life and Adventures of Polly Haycock (London: T. Taylor, 1750). The three vignettes are labelled: “[1] With Child by the Under Turnkey, put on Board a Lighter, from thence to a transport ship to Virginia. [2] Whipp’d during Dinner her Master boasting that no Monarch upon Earth had so fine Musick as he fancied her Cries. [3] Her usage to her Free-born English servants is as they do Negroes and Felons in the Plantations tho’ She felt the Mesery herself.” Source: http://jcb.lunaimaging.com/luna/servlet/detail/JCBMAPS~2~2~277~100287:The-Fortunate-TRANSPORT-

“There was some sleeping, some spewing, some pishing [sic], some shitting, some farting, … some darning, some Blasting their legs and thighs, some their Liver, lungs, lights and eyes. And for to make the shene [sic] the odder, some curs’d Father Mother, Sister, and Brother.”1 As accounts of transatlantic shipboard crossings during the eighteenth century go, this one stands out for its vivid corporeality. But what is truly unusual about it is that it was written by an indentured servant. John Harrower had been compelled by poverty to leave his native Shetland Islands in December 1773, and had searched fruitlessly for employment from Edinburgh to London before embarking for Virginia on the Snow Planter in January 1774, a journey he meticulously recorded in his diary. The very fact that Harrower was literate enough to put his experiences down on paper renders him atypical, for the vast majority of his fellow indentees lacked the education or the equipment to write themselves into posterity. Yet Harrower was far from alone in making a gruelling journey to the New World under the system of indenture. According to the best estimates, over half of the 198,400 immigrants arriving in America between 1607 and 1699 were bound laborers, and even as this proportion fell to a third during the following seventy-five years, thanks to the rapidly increasing importation of slaves, some 155,800 individuals nonetheless entered the country under indenture during the immediate pre-Revolutionary period.2

Each one of these unfree white workers had signed an agreement back in England which specified that, in return for the expense of being carried over the Atlantic and the cost of food and clothing once ashore, they would be assigned to an American master, typically for a period of between four and seven years, during which time their owner had a legal right to their labor and all that derived from it. For most this requisition of their freedom was a voluntary response to straitened economic circumstances, for some it was imposed by the British courts as an alternative to capital punishment; for all it involved a powerful sense of physical and emotional self-estrangement. “In Virginia now I am, at Belvidera settled, / … from my sweet wife separated, / And obliged to leave my Infant Children, Fatherless,” Harrower writes in one of his periodic attempts at verse. “For in a prison at large I’m plac’t, / Bound to it, day and night; / O, grant me patience, God of grace, / And in thy paths make me walk right.”3 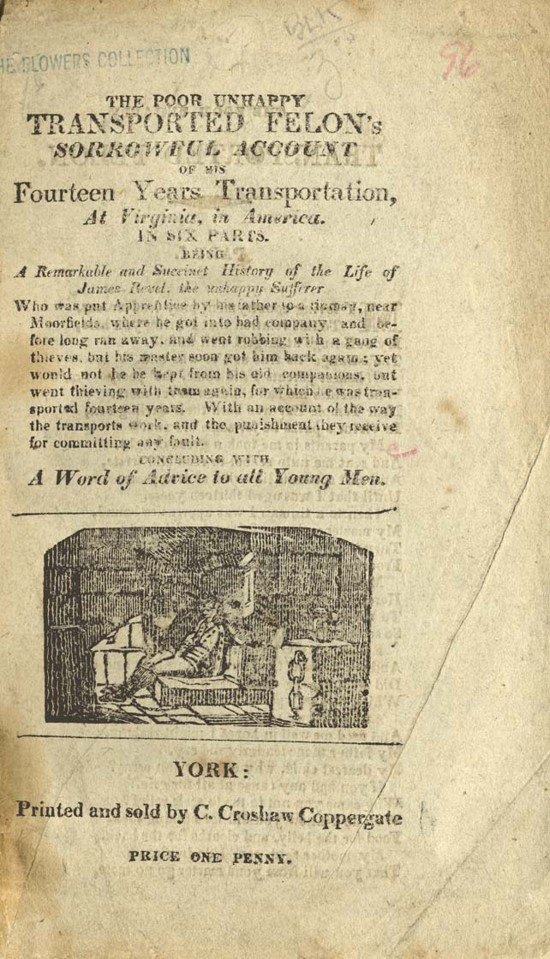 Title page from an English edition of James Revel’s The Poor Unhappy Transported Felon, circa 1800.

Harrower’s identification of his plight as a voluntary indentee with that of his convict brethren here is all the more striking for the fact that he had a generous master who gave him a relatively undemanding job as a clerk. For plantation servants, such as Charles Bayly, who often had to endure being “stripped naked … and whipped” during their “sore and grievous labour” in the fields, the usual point of comparison for their experience was “the common manner of [treating] slaves.”4 Crucially, this widespread analogy, its potential disjunctiveness to twenty-first century eyes notwithstanding, tells us much about the contextual and conceptual realms within which indentured servitude needs to be situated. Most basically, in light of their central (if long-neglected) presence within the circuits of exploitation and dislocation reshaping the New World during the seventeenth and eighteenth century, indentured servants can be understood as sharing an experiential world with the African Americans, as well as the sailors and indigenous peoples, who were also subject to the period’s coercive labor systems. Indeed, while it remains less prominent than such critical fields as the Black Atlantic, the Revolutionary Atlantic, or the Red Atlantic, the zone of diasporic victimization and resistance we might call the Indentured Atlantic has increasingly become a site of attention over the last decade.5

Complementing this scholarly trend, a significant part of my own recent research at the British Library, courtesy of an Eccles Centre Fellowship, has been dedicated to unearthing and exploring the role that indentured servants played in the development of colonial American society. Rather than taking the existing historiographical routes into this subject, however, which have largely concentrated on patterns of migration, the laws of servitude, and the transition to an ideology of free labor, I have been most interested in trying to establish a cultural history of bound labor – a mode of reading the Indentured Atlantic that is alert to the ways in which a constellation of poems, plays, diaries, novels, memoirs, and criminal confessions came together in mutually contesting and complementary fashion to form the popular image of the bound laborer.6 Such a project is important, I would argue, because it allows us to test colonial America for signs of social change and stratification using the earliest extant body of writing by and about poor white workers. If, I have been trying to ask through my research, we take E. P. Thompson’s seminal definition of “class-consciousness” as the result of “common experiences … handled in cultural terms: embodied in traditions, value-systems, ideas, and institutional forms” to be our benchmark, then what does the literature of indenture reveal about the making – or unmaking – of an American working class?7

Inevitably, my answers to this question have so far been, and will no doubt remain, diverse and ambiguous. For while it is possible to determine a shared narrative around indenture the common plot-points through which Anglo-Americans organized this story – economic downfall, transatlantic relocation, chastening labor, moral penitence, hard-earned liberation, and homeward return – can have very different valences according to the genre of writing within which they are deployed. And this is not even to reckon with the partial nature of the evidence that the indenture system left behind. As with the other Atlantics-of-the-marginal that have recently been recovered, the Indentured Atlantic can only be apprehended through a fragmented archive that Joanna Brooks pointedly describes as embedded within “an oceanic fog of loss, forgetting, ideology, and anonymity.”8

Consider, for instance, the most (indeed, pretty much the only) regularly anthologized piece of indenture writing – James Revel’s The Poor Unhappy Transported Felon’s Sorrowful Account of his Fourteen Years at Virginia (c.1656-92?). This 280-line ballad, set to the tune of the popular air “Death and the Lady,” first entered into print in multiple chapbook editions in the 1760s, although some scholars have dated its origins to a century or so earlier.9 In succinctly articulating its speaker’s six-part journey from starving robber, deported criminal and bound fieldhand to repentant sinner, liberated worker and prodigal homecomer, The Poor Unhappy Felon offers an almost paradigmatic account of the personal trajectories visible in other indenture narratives. Yet we cannot be certain when this ballad was composed, who was performing and listening to it, or even whether James Revel existed at all. Indeed, even once it became a published artefact The Poor Unhappy Felon conspicuously lacked semantic fixity, as its verses became attributed to different authors in other (undated) imprints and were mined (without acknowledgment) by various memoirists. In one sense, of course, this fluidity of ownership is a consequence of The Poor Unhappy Felon’s paradigmatic power, and a continuation of its previous circulation through the folk culture of the working poor. In another sense, however, it intimates a fundamental challenge to the modes of historicization and evaluation typically adopted by those seeking to interpret the past. How, it must be asked, can we grasp the function and significance of the oral life of the Indentured Atlantic – the aspect of its culture that was most active, but for which so little evidence remains? Well, one answer, as I will suggest in the next part of this post, potentially lies in paying greater attention to the circum-Atlantic power of the singing voice.

'Brings Back Some Memories': Textual and metatextual experiences of nostalgia in Twin Peaks: The Ret...
“FACTS TAKE A BACKSEAT TO MYTHS” – BREXIT FROM AN AMERICAN PERSPECTIVE. An Interview with Leif Johan...
Meet the Curator: 'Labour's Special Relationship'
Conference Review: 'Not Your Average Superhero'
War Among All Puerto Ricans: The Nationalist Revolt and the Creation of the Estado Libre Asociado of...
Book Review: Literary Fiction: The Ways We Read Narrative Literature by Geir Farner
American Studies in Europe Roundup: U.S. Studies Online Special Series
60 Seconds With Todd Carter

Matthew Pethers is an Assistant Professor of American Intellectual and Cultural History at the University of Nottingham. He has published widely on eighteenth- and nineteenth-century American literature, history and print culture, including articles in Early American Literature, History of Science, and American Studies, and book chapters in John Neal and Nineteenth-Century American Literature and Culture (Bucknell University Press, 2012), The Materials of Exchange Between Britain and North East America, 1750-1900 (Ashgate, 2013), and New Directions in the History of the Novel (Palgrave, 2014). He is currently co-editing The Edinburgh Companion to Nineteenth-Century American Letters and Letter-Writing, and has a chapter on indenture narratives forthcoming in The Cambridge History of American Working-Class Literature.
View all posts by Matthew Pethers →
Tagged  American Working Class, C17, C18, Colonial era, Transatlantic.
Bookmark the permalink.