Throughout November 2015, U.S. Studies Online will be publishing a series of posts to mark Native American Heritage Month. In the second post, Susannah Hopson (University of Hull) discusses the problem of memory and memorialization in her research on Native American massacre sites. 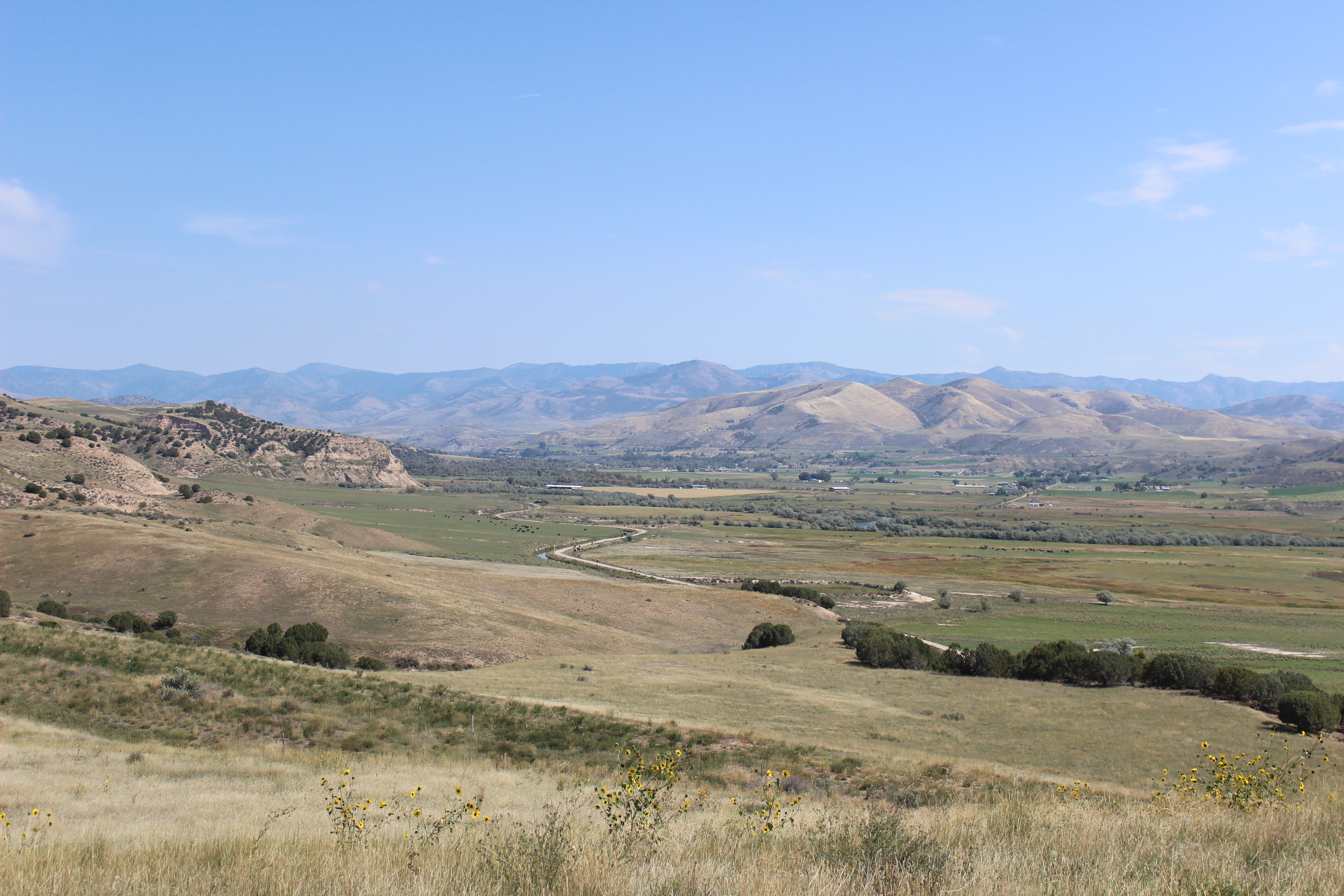 In September 2014 I visited the Bear River Massacre Site in the remote and hilly region of South Western Idaho. Here, one of America’s most brutal and violent massacres of Native Americans occurred. On January the 29th, 1863, between 200 and 300 Northwestern Shoshone were slaughtered by California Volunteer troops. Having written about the infamous Sand Creek Massacre of 1864 for a previous blog post, I thought it would be interesting to consider the under-researched Bear River Massacre which took place only one year earlier. Bear River has received limited public or scholarly attention but is the site of a fascinating and complex process of memorialization from both local and national Euro-American communities and the Northwestern Shoshone.

On a bitterly cold January morning, 200 California Volunteers under the command of the ruthless Colonel Patrick E. Connor approached the bluffs overlooking the Northwestern Shoshone winter encampment. The troops marched slowly at nighttime in sub-zero temperatures.  Upon their dawn arrival, the Shoshone were beginning to rise. According to reports, Connor’s second-in-command, Major Edward McGarry, engaged in fire prematurely after being taunted by Shoshone. In his battle report Connor noted: “On my arrival on the field I found that Major McGarry had dismounted the cavalry and was engaged with the Indians who had sallied out of their hiding places … and with fiendish malignity waved the scalps of white women and challenged the troops to battle, at the same time attacking them.” The Shoshone tell a different story of the massacre. One of their memorials reads: “Col. Connor never had any intention of negotiating with the … [the Shoshone] people and arrived with the specific intention of attacking the Indians, leaving them no alternative but death and annihilation.” The Shoshone were driven down into the icy ravine by the soldiers and those that frantically tried to escape were indiscriminately shot down. Chief Bear Hunter and 90 women and children were among the massacred.

Remembering this bloody day has troubled the small county of Franklin, Idaho, and remained a source of contention between local Euro-American and Northwestern Shoshone communities. The difficult memory of Bear River is represented by a series of intriguing and conflicting Euro-American and Shoshone memorials that stand collectively at the massacre site today. 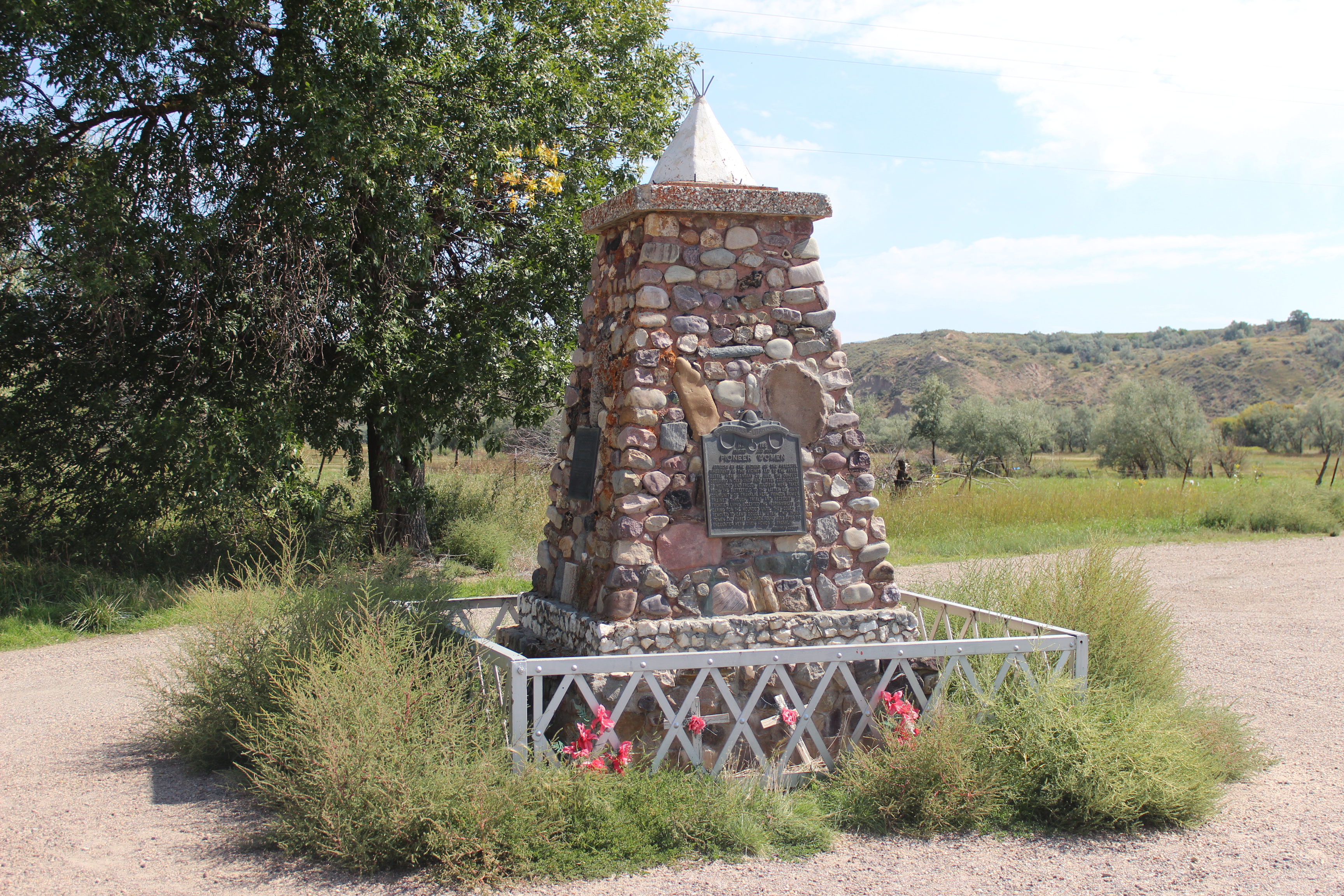 Driving to the Bear River Massacre Site on a warm, bright autumn day, I found the roads empty as the sun shone on the vibrant orange and red trees and the lush green hills rolling in the distance. The tranquility of my surroundings made it hard to imagine that this had been the site of such grotesque bloodshed 150 years ago. I was the only person at the site upon arrival but was later joined by an elderly Native couple who looked quietly out over the massacre site. I walked slowly around the first memorial, taking in the plaques and the tipi that stood atop the brick memorial.

Two major Euro-American memorials commemorate Bear River. The original 1932 memorial has three plaques dating from 1932-1990. The first plaque, attached in 1932, commemorates the “Battle of Bear River”. The second, placed by the “Daughters of Utah” in a 1953 re-dedication, honours the local Mormon women, who helped wounded Volunteers after the massacre. The third, entitled “Bear River Massacre Site” was added in 1990. The second memorial, dedicated in 1990 by the Idaho State Historical Society, reads: “Bear River Massacre,” replacing a 1972 version that referred to the slaughter as a “battle.”

Both the 1932 and 1953 plaques portray the Shoshone as a threat to the local Euro-American community. The 1932 memorial refers to the Shoshone as “combatant,” reflecting the then current attitude that the Shoshone were killed to preserve peace in the west. The 1953 plaque commemorates the values of the local community and supports the efforts of Connor and the Volunteers for saving the “peaceful” Mormon citizens from hostile Shoshone attacks. Both these commemorations stress the security the massacre achieved for local communities before recording the loss of Shoshone lives. These representations stood unchallenged for almost forty years until, in 1990, the National Park Service renamed the site, “Bear River Massacre Site,” adding a plaque to the 1932 monument and giving the site historical landmark status. This was reflected at a local level when the Idaho State Transportation Department erected a sign with the words, “Bear River Massacre.” Placed below these Euro-American memorials were temporary markers left by the Northwestern Shoshone. Hanging in a nearby tree were other tribal dedications: small pieces of coloured string, beads and flowers. For me, these tributes stood out, demonstrating the interplay of tribal memory and Euro-American representations of the past. These conflicting memorials reveal the struggle for ideological control over the region’s complex past, as well as shifts in local and national memory. 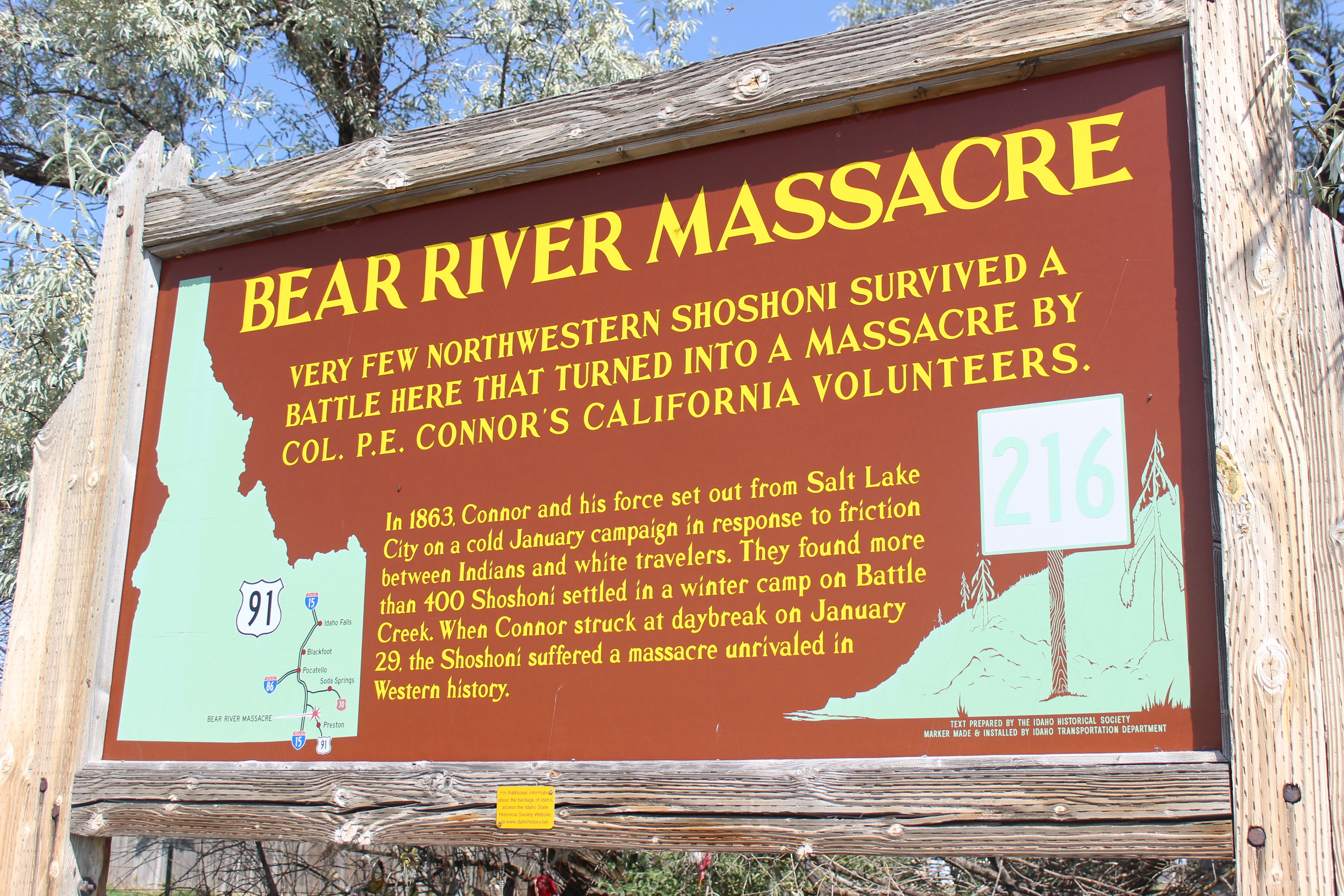 Problematically, all the Euro-American memorials omit the Northwestern Shoshone voice. Not until March 2003 was the tribe deeded twenty-two acres at the massacre site. In 2006 the Shoshone erected seven signs overlooking Bear River. These signs trace the history of the Northwestern Shoshone, the destructive impact colonization had on their livelihoods and finally they testify to how the massacre has been kept alive in contemporary Shoshone culture.

I was struck forcefully by the different ways the Shoshone and Euro-Americans treat remembrance. Firstly I was shocked by the graphic portrayal of the massacre by the Shoshone: “Heart-wrenching accounts describe mothers, whose crying babies threatened to give away the location of other hiding tribal members, jumping into the freezing river with children in arms and having the swift current carry them away.” These terrible scenes are neglected in the Euro-American markers, where commemoration of the massacre is either celebratory or chooses to overlook its violence.

The Euro-American markers portray static versions of memory and history. For the Shoshone, memory is a process, a story that has great value in their contemporary lives. One marker reads: “Most Shoshone people today do not want to dwell on the tragedy or inflame old animosities. They seek understanding and peace among all people. Nevertheless they also feel an obligation to tell the story of their ancestors, to learn from the mistakes of the past, and to honor the dead.” Remembering is crucial for the Shoshone, but so too is moving on and using the past to promote understanding between tribal members and the broader culture.

The Bear River Massacre Site’s multiple and contradictory memorials portray cultural shifts in memory that reflect changing dominant attitudes within Euro-American society. However, they also demonstrate how the Shoshone are publically reclaiming the memory of the massacre, challenging dominant cultural perceptions of history. What is truly fascinating is that these memories rest side by side, allowing us to engage in the continuous social and cultural construction of memory, reminding us that memory is not static but is an ongoing process that shapes our historical perceptions.

“Vaudeville Indians” on the British Stage (British Library)
Review of 'Avant-Gardes Now!' Symposium
60 Seconds With Emma Long
Counterpublics and the New Dynamics of Contemporary Conservatism: From the Tea Party to the Trump Mo...
Review: Queer Work/Queer Labour
The Indentured Atlantic: Bound Servitude and the Literature of American Colonization (Part Three)
“Be Curious, Not Judgemental.” Influences of Positivity and Kindness in Ted Lasso
Introduction to the Special Blog Series

Susannah Hopson is a third year PhD candidate at the University of Hull. Her research makes a comparative study of three Native American Massacre Sites from 1863 until the present day in order to test the limitations of collective memory in the American context. She reveals memory as a deeply culturally specific process that does not always gel with the hegemonic discourse imposed by settler communities.
View all posts by Susannah Hopson →
Tagged  C19, History, Massacre, Memory, Native Americans.
Bookmark the permalink.