The second post in the series is by Dr Christopher Phelps (University of Nottingham), co-author of the new title Radicals in America: The U.S. Left since the Second World War, who reflects upon the intellectual advantages and challenges when faced with designing and teaching the history of U.S. radicalism.

So you want to teach American radicalism?  I can’t imagine you’ll regret it.  The subject has a moral quality that lends itself to the most venerable aims of liberal education, namely scrutiny of self and society. Ideas of rebellion and dissent invite student curiosity and excitement, and even transformations of thought. Letting students see the country’s past through the eyes of its outliers, rebels, and malcontents helps round out a general curriculum on the United States.

Here are some questions you might ask as you design the module.

Where should you place the topic’s boundaries?

In the scholarship on radicalism, there are two essential approaches. One defines radicalism as extremism of any kind, so would include “radical right” groups such as the Ku Klux Klan, the John Birch Society, and the more recent Islamist “radicalisation.” The other conceives of radicalism as about “getting to the root,” as indicated by its Latin etymology. This focuses on those who seek to overturn the dominant structures of the society in pursuit of greater equality, freedom, inclusiveness, and fairness. To this way of thinking, far-right groups that condone such past or existing social structures as slavery, racial hierarchy, gender binaries, and capitalism are reactionary, not radical—and hence better covered by modules in American conservatism. Personally, I take the second view, but either approach is legitimate so long as it is spelled out clearly.

What readings will you select and how will they be organized?

If you teach in an American Studies context, you might elect to organize the material topically: violence and non-violence, the variety of ends and utopias (anarchy, socialism, etc.), or aspects of gender, sexuality, and race. I opt for chronology, beginning with the American Revolution and proceeding to the present. 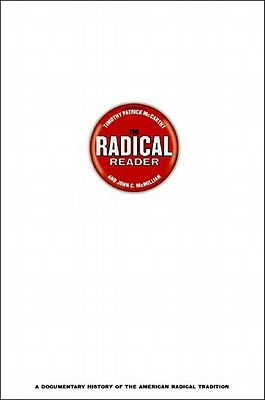 For readings, I assign a book of primary documents: Timothy Patrick McCarthy and John C. McMillian’s The Radical Reader (New Press). The book is superb, but since this is a HOTCUS blog let me say The Radical Reader is best on the eighteenth and nineteenth centuries, and a bit more scattershot on the twentieth century. It could especially use an update to cover more recent decades than the 1990s. Still, I keep assigning it because its selection is so wide-ranging, inclusive, and lively.

Assigning only primary documents as readings does have a weakness, namely that the secondary literature would better address questions beyond the ideological: organization, resources, and strategy, the rise and fall of movements, problems in radical biography, and so forth. I may someday mix in secondary readings, particularly if no second edition of The Radical Reader materializes. (Yes, this is a shout out to McCarthy and McMillian!)

What work will you assign?

This will vary by level, naturally. My module falls at Level 2. The design is a standard lecture-seminar combination, with an exam at the end based on lectures, and a coursework essay.  I believe second-year students are ready for a challenge, so I allow them to write on just about any topic they see fit rather than assigning fixed questions.  I also ask them to address a research topic (say, radical left-wing group Weatherman, if that’s what they pick) and the secondary literature (the varied writings on the group).  This concept requires several workshops along the way to explain. In the end, most students understand the task and succeed at it. I believe their dissertations the following year benefit from having thought about making an argument on two levels as this assignment demands.  In any event, I advise that you strive to design the module to enhance student success while simultaneously challenging them to a higher level of intellectual performance.

What is the mission of the module?

Is your objective political or intellectual? While many of us are drawn to subjects like this one out of a feeling of admiration for the protagonists, and while we may teach the material in ways that are implicitly affirmative of the value of society’s gadflies and revolutionaries, I say intellectual objectives should be the focus of higher education. I do not think classes in the history of radicalism should be about inculcation of doctrine. Let’s leave that to organizers of social movements.

The task of historians is analysis, interpretation, and comprehension. We try to make sense of why some American citizens became radicals when others did not, what ways American radicalism differed from radicalisms abroad or were influenced by them, why some radicals succeeded where others failed, what the distinctive character of radicalism has been in different moments, what differences separate the varied strands of radicalism, and other questions that arise from asking critical questions of the past.

This topic does have an irreducibly political quality, to be sure. The neoliberal university, guided by industry-defined objectives of impact and fostering narrow student careerism, disappears from view at moments when seminars light up with student realizations that society often experiences its greatest impact from those who defy and disrupt it.  I suspect that this innately controversial quality of radicalism is why students are drawn to this subject and why it recruits high enrolments.  That, in turn, speaks to an enduring student interest in education as the pursuit and discovery of meaning.

“Regardless of my module mark,” one student wrote me this year (she had not done as well as either of us had hoped), “I really did enjoy your module as it challenged me and opened my eyes to a bigger world and greater causes out there.”

Ideas matter more than the mark?  How very radical.

Conference Review: 'Protest: Resistance and Dissent in America'
“A Northern city with Southern characteristics”: Ferguson and the History of Race Relations in the S...
Trauma, Code and 9/11: Reading Vulnerability in a Digitized Present
Storify of our #bookhour twitter chat on EUPHORIA by Lily King
Primaries as Sports and Spectacle: Sports Metaphors in Twenty-First Century Presidential Primary Deb...
Book Review: Canadian Literature and Cultural Memory, Edited by Cynthia Sugars and Eleanor Ty
Review of ‘Myths in Culture’ Postgraduate Symposium 2014
The Alt Right: Trump, Terrorism and the Digital Age: Part Two

Christopher Phelps is senior lecturer in the department of American and Canadian Studies at the University of Nottingham and co-author, with Howard Brick, of Radicals in America: The U.S. Left since the Second World War (Cambridge University Press, 2015).
View all posts by Christopher Phelps →
Tagged  C20, C21, Politics.
Bookmark the permalink.