Nine speakers, four panels, one day: the highly-anticipated conference organised by the Tate Modern in conjunction with their Soul of a Nation exhibition was not only incredibly broad in the number of topics discussed but simultaneously rich in detail. The conference was truly interdisciplinary in nature; from abstract painting, to assemblage sculptures, to street art, to documentary photography, every conceivable art form was examined in the context of the artists’ connection to the Black Arts Movement in the ‘60s and ‘70s. 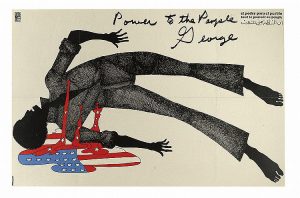 The event was anchored by several enduring themes; representation, community, identity, and space were repeatedly broached in the keynotes. How representations of African-American experiences are expressed by black artists was first discussed by Kellie Jones (Columbia University), where she discussed installation/sculpture work by Noah Purifoy and John Outterbridge.  Jones argued that the re-engineering of objects associated with marginality – metal, antiques, junk – in an art context critiques the parameters of traditional form. Samanda Aranke (School of the Art Institute of Chicago), analysing the poster Power to the People, George, expanded on the ways in which visual oscillations between abstractions and figurations effectively represent the trauma suffered by African-Americans at the time. Aranke commented that the use of such stylistic abstraction and bodily fragmentation crucially represent trauma without re-staging these acts of violence.

Such representations of black people and their culture are empowering by virtue of their relatively abstract nature. The abstraction of black figures in political art allows for a nuanced additional meaning through the incorporation of visual metaphor, while the presence of bare feet in a composition, as seen in Power to the People, George, can be read as a dialectical symbol of both commitment to freedom and enslavement (and also, as Aranke noted in the following discussion, possibly referential of Christian symbols of martyrdom). Likewise, the re-appropriation of found objects typically associated with poverty in the installations of Purifoy and Outterbridge function as a simplistic yet sophisticated social commentary on the struggles of African-American people in the American South.

Shelley Turner deCarava, art historian and wife of the late Roy deCarava, provided invaluable insight into Mr deCarava’s career. DeCarava described the incredible “deep observational state” into which her husband would enter when photographing his subjects, a crucial part of his technique. How did he manage to capture the sound of the jazz musicians’ instruments as he photographed them, of the intensity of political figures such as Malcolm X? He would wait, said deCarava, for you to reveal yourself to him. Roy deCarava’s representations of the African-American community form a body of technically and visually astounding photographs, but also serve as a valuable archive of visual black history from a black perspective. 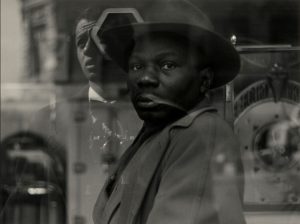 The importance of creating spaces in which black/African-American people can meet and establish meaningful dialogue with like-minded others appeared consistently in many keynotes. Such spaces play a crucial role in the development of a more inclusionary society, but equally in inciting progressive political strategy. Reflecting on their respective experiences as young black women in third-level education, Marlene Smith (artist and curator) and Lubaina Himid (artist; University of Central Lancashire) recalled how black artists and writers shaped their education. Smith read a “precocious” letter she wrote to artist Frank Bowling as a student, an act which marked the beginning of the many interactions she would have with artists in the Black Arts Movement; interactions which, according to Smith, were a vital resource during her time at university, which was a fundamentally white and male-dominated environment. Himid, too, recalled the magnitude of the effect literature by black writers had on her as a young woman, texts such as Toni Morrison’s The Bluest Eye inspired her in both a personal and artistic capacity.

Margot Natalie Crawford (University of Pennsylvania), in her talk centering on exterior black art and the Wall of Respect, echoed a similar sentiment; through the creation of communal spaces, black art became publicly displayed, experienced, celebrated.  Thus spaces like the Wall of Respect function as both a literal and figurative site of resistance, where the eyesight of the community can be decolonised, the ideas of a collective consciousness visualised and physically manifested. The Black Arts Movement embraced such public art which functioned as a response to interior (that is to say, white, institutional) art.

Ideas of mentorship and pro-active efforts of collective space arose once again in Tuliza Fleming’s (National Museum of African American History and Culture) presentation on FESTAC ’77. This phenomenally successfully celebration of African culture was attended by AfriCOBRA co-founder Jeff Donaldson, whose influence extended beyond the artists who attended FESTAC to the students of Howard University, where he significantly expanded the curriculum and established an inclusive space which was accessible to artists with no formal training. Notions of black/African identity were discussed; Donaldson and the DC coalition of artists who attended FESTAC were mindful of the cultural differences between themselves as African-Americans and the people native to Africa who they encountered during the festival. Africa frequently appeared in the Black Arts Movement as a romanticised idea, a symbol of de-colonisation and freedom. Smith described her “ownership of [her] blackness”,  the vastness of what this aspect of identity can mean, and the importance of entering into dialogue with others in safe spaces, where such issues can be discussed, debated, and potentially resolved.

The concept of safe space in relation to the Black Lives Matter moment was reiterated again by artists Barby Asante, Kevin Beasely, and Luke Willis Thompson in a discussion chaired by Elvira Dyangani Ose (Creative Time; Goldsmiths, University of London). Asante’s film approached ideas of space in a public context; these sites, especially, can contain histories of black trauma and joy simultaneously. The participants commented that public spaces, in which communities can freely express themselves, function both as sanctuaries and as sites of grief and remembrance of black pain. 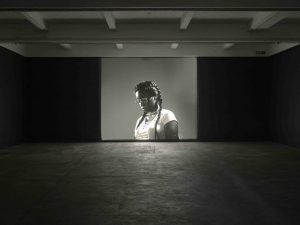 Beasley noted the dual nature of sound in fine art, which acts both as a conduit for reflection and observation; an unobstructed outlet through which the viewer can encounter a space. Yet a lack of sound can be equally empowering. Thompson noted the potency of silence in his film of Diamond Reynolds placing Reynolds within the maelstrom of trauma which she was experiencing. This was met with some refute in the subsequent discussion, in which Thompson was criticised for his work reading as a “spectacle” of black trauma because Reynolds’ silence in the film. Thompson counter-argued that Reynolds was empowered by her on-screen presence, silence none-withstanding.

The conference successfully interrogated how art works created during the Black Arts Movement embody the zeitgeist of some of the most memorable cornerstones in black history. From Gerald Williams’ psychedelic paintings overlaid with slogans, to Roy deCarava’s immersive photography, to Barkley Hendricks’ unapologetically outlandish self-portraits, the artworks of the Black Arts Movement are a testimony to a nation’s fight for the voices of African-Americans to be heard. The retrospective examination of such artwork not only informs how we understand the events of the past, but equally informs how we will overcome the political struggles we face in the present.

Sophie is a graduate of the National College of Art and Design, Dublin. She is an MA candidate in Film and Photography Studies at Leiden University, where her research focuses on black and African-American women’s photographic portraiture in post-colonial contexts. Her artwork has been exhibited in the Royal Hibernian Academy in Dublin as well as featured in publications such as The Pickled Body poetry journal.
View all posts by Sophie Lawlor →
Tagged  African-American Art, Art Exhibition, Black Art, Black Arts Movement, Black History, Tate Modern.
Bookmark the permalink.