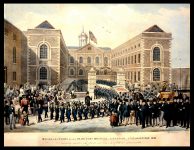 2017 marked two anniversaries in Liverpool: the tercentenary of the Bluecoat building, a contemporary arts centre which was originally constructed as a charity school in 1717, and the tenth anniversary of the International Slavery Museum. Like many institutions founded in eighteenth-century Liverpool, Bluecoat was supported by funds derived from maritime trade; in particular, the transatlantic slave trade. As part of Bluecoat’s year-long anniversary programme, special attention has been paid to exploring the building’s connections to slavery. Continue reading