The Progressive Era (1890-1920s) was a time of intense social, economic, and political reform largely carried out by the middle class. Most scholars of Progressivism, including David Thelen and Daniel T. Rogers, argue that Progressivism is not monolithic and there has never been a coherent definition. Paul Lawrie has chosen to focus on one particular aspect of the Progressive Era: the deepening inequalities that occurred due to an industrial and economic boom, causing a rise in racism and racial policy. Continue reading 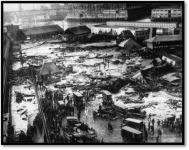 This year marks the one-hundredth anniversary of the Boston Molasses Flood, arguably one of the strangest disasters in American history. Twenty-one people died, 150 were injured, and homes and buildings were destroyed. In the midst of the after-math of World War I, Calvin Coolidge assumed the role of Governor of Massachusetts, and in doing so he inherited the responsibility of Boston, a city that was in the midst of social and economic crisis. The Molasses Flood only served to heighten feelings of unease, with some of Boston’s leading figures and its media looking to place blame, with anarchists and communists heading the list of potential suspects. Ultimately, the Molasses Flood was a preamble for a year of upheaval in Boston that would see widespread violence, acts of terrorism, and a historic police strike. This article looks briefly at the events of that fateful day on January 2, 1919 and its impact. Continue reading

In this dual biography, Sarah Haviland traces the political and intellectual career of activist couple James and Esther Cooper Jackson. Utilising a combination of personally-conducted oral history interviews and archival material, she argues that an analysis of the couple demonstrates that communist-affiliated activists of the 1930s Popular Front era were able to adapt their activism and influence the trajectory of the modern civil rights movement that emerged in the 1960s. Continue reading