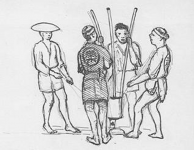 From 1633 until 1853, the military governments of Japan enforced a policy of sakoku or ‘closed country’ which prevented foreigners from entering Japan on penalty of death, and prohibited Japanese citizens from leaving. This isolationist period was brought to an abrupt end in July 1853 when American Commodore Matthew Perry steamed four warships into Tokyo bay and threatened to open fire unless the Japanese agreed to enter into trade negotiations. Continue reading

While the internment of Japanese Americans during World War II is an established focus of historical study, little attention has been paid to Japanese Americans regarding their status as one of the longest-standing Asian minority groups in the US. Tsuda seeks to remedy this, and shows how historical events have influenced the perception of Japanese Americans over time. In this book he draws on first-hand accounts and his own interviews with Japanese Americans, which are helpfully synthesised to show differences both within and between each distinctive historical cohort. Continue reading

Historical amnesia has created the impression that the reconstruction of Germany and Japan along liberal capitalist lines was a foregone conclusion in 1945. In reality, however, the decision to occupy was a contested question for both Washington’s decision-makers and for soldiers on the ground, many of whom would become reluctant participants in America’s project of democratic nation-building. Continue reading