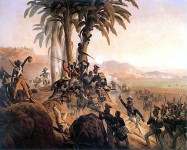 Following the success of the American colonies in gaining their independence from Britain, an endeavour in which he had played no small part, Thomas Jefferson hoped that people of other nations would follow his countrymen down the road to political revolution. But the black republic of Haiti and its citizens became a national nightmare at this foundational moment of American history, and in many ways have retained that identity for over two hundred years. Continue reading