By its very nature, the American New Right was destined to have an ambiguous relationship with the state. A movement fusing Cold War hawks, social conservatives, and economic libertarians, it on the one hand called for handing over considerable amounts of money and authority to the state for ‘national security’ while on the other demanding that same state be severely restricted in its control over any aspect of national life deemed ‘the economy.’ Kyle Burke’s fascinating and illuminating book, Revolutionaries for the Right, proves that this ambiguity went deeper than the mere results of coalition politics – and, in doing so, provides a window onto the origins of the political forces that have increasingly displaced the New Right following the 2016 US presidential election. Continue reading 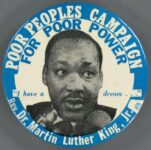 In recent months, there have been ongoing public discussions about Critical Race Theory (CRT).[i] With Nebraska Governor Pete Ricketts backing a resolution to combat the teaching of Critical Race Theory in the state’s universities,  and other states responding to crowds of parents and protestors calling for the ‘removal of CRT… Continue reading