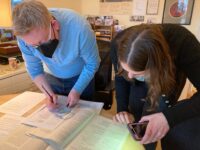 I’ve been a BAAS member for a long time now, but hadn’t thought about applying for an award before, thinking I was probably too long past PhD completion to be eligible for one (I got my PhD in 2006). I experienced a debilitating illness over 2018/19 and while I’d rather… Continue reading

Burroughs Unbound is a collection of essays which explores recent interdisciplinary research on the twentieth-century US author William S. Burroughs. The main issues of the book concentrate on the performative aspects of Burroughs’ experiments on literature, particularly through what he, and collaborator Brion Gysin, called the ‘cut-up project’. The structure of the book somewhat mirrors the cut-up techniques used by the artists by being sliced and divided into three parts, with a series of appendices. The first part deals with ‘Theory’, where postmodernist and poststructuralist notions of control are captured via Derrida, Deleuze and Foucault. The second part, entitled ‘Texts’ is a textual analysis of Burroughs’ writing, from Naked Lunch (1959) to the cut-up texts and beyond. The third part explores Burroughsian ‘Performance’, in which, as the editor, Stanley Gontarski argues in his ‘Atrophied Introduction’, ‘Burroughs was as much a media and performance artist as he was a traditional literary figure’.[1] Continue reading 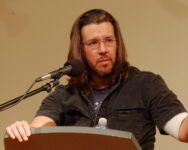 Mary Shapiro makes the case for Wallace’s Dialects clearly on the first page: Wallace’s ‘inventive and poetic uses of language have been frequently praised, but little studied from a linguistic point of view’ (1). Shapiro’s book is a welcome addition to the field of Wallace Studies. Positioned as it is, Wallace’s Dialects has two clear distinctions as a monograph. First, this book focuses very notably on Wallace’s texts (both fiction and not) at the micro level, at the level of sentence. Particular word choices, even letter choices, are scrutinised across Wallace’s oeuvre. This is distinct from other monographs that more readily examine the structure of Wallace’s writing at the macro level.[i] Second, and relatedly, this tight focus at the level of sentence means that Wallace’s Dialects operates at the juncture of textual analysis and biography – a way of mediating between the effects of the writing and the conditions of that writing’s composition. This monograph closely reads the language to make conclusions about both texts and author. Continue reading

Understanding Jennifer Egan by Alexander Moran is the first book-length study to provide critical analysis of all of Jennifer Egan’s published fiction to date. Arriving in the same year as Ivan Krielkamp’s A Visit from the Goon Squad REREAD,[i] the rising critical attention to Egan’s work is a welcome sight, correcting the tendency to overlook Egan’s constant and significant presence in contemporary fiction. Continue reading

The American Weird is an essay collection divided in two parts: ‘Concept’ and ‘Medium’. Its claim to originality lies in the latter part’s focus on manifestations of the weird in non-literary media running the gamut from film and music to television and videogames. Naturally, however, these cannot be discussed in isolation from the first part’s question of ‘concept’ – of what the weird is. Continue reading

Given Herman Melville’s towering status in American literary and cultural history, it seems rather odd to ponder his ‘value’: his reputation and elevated position in the cultural canon are sufficient to over-awe the reader and convince them that his works must be what is casually referred to as ‘great literature’. Continue reading

The  Postgraduate Essay Prize is offered annually by the British Association for American Studies. It is awarded for the best essay-length piece of work on an American Studies topic written by a student currently registered for a postgraduate degree at a university or equivalent institution in Britain. This year’s winner is Victoria Addis, University of Leeds.  Continue reading 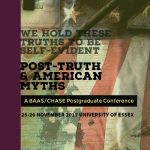 Rounding off 2017 (the year of ‘fake news’ and ‘alternative facts’), this year’s British Association for American Studies postgraduate conference was a timely, enlightening scholarly event, centred on concepts of ‘truth’, myth-making, and cultural fact and fiction in American society. Continue reading

Marking the first centenary of the Russian Revolution, both the ‘Russian Revolution: Hope, Tragedy, Myths’ exhibition and the one-day symposium demonstrated painstaking research and showcased the most arresting highlights of that turbulent era. Continue reading