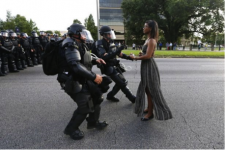 Elizabeth Hinton has a produced a work that is exceedingly relevant to modern debates and useful not only to specialists but to anyone interested in the historical roots of controversial topics such as mass incarceration, the policing of urban communities, stop and frisk searches, civil asset forfeiture, and the militarisation of American police forces. Hinton makes the connections to current events explicit and displays a striking earnestness; she is not simply discussing abstract policies but also critiquing modern American society. Continue reading

Beginning his history with Roosevelt’s election in 1932, Schickler argues that civil rights was, put simply, ‘not part of the programmatic liberal vision in the early 1930s’ (27). With African American voters generally loyal to the party of Lincoln, and with Roosevelt attempting to appease both the organized labor movements of the South and West (who were generally resistant to civil rights) and conservative northeastern business interests, it took the creation of the Congress of Industrialized Organizations (CIO) in 1935 to bring African Americans into the coalition and redefine New Deal liberalism. Continue reading