Foreshadowing the expressed foreign policy by the incumbent President of the United States, the National Association of Manufacturers confessed in 1920 that immigration might endanger the nation and exclaimed that policy must rest on “the needs and interests of America first”.[1] We learn this from reading John Higham’s seminal work, Strangers in the Land, which quietly celebrated its 60th anniversary in 2015. The book’s subject is American nativism, defined by its author as “intense opposition to an internal minority on the grounds of its foreign (i.e. un-American) connections”.[2]  In lieu of a formal follow-up, the author reflected on his first book in the first year of the new millennium. Whilst much had changed by then, Higham nonetheless sensed “an acrid odor of the 1920s” in the air.[3] Given the nativist impulses expressed in the 2016 election, with the winning candidate taking, “a more populist, nativist, avowedly protectionist, and semi-isolationist”-line, the purpose of this post is to revisit Strangers as an aide in understanding the country’s current conditions and predicaments. 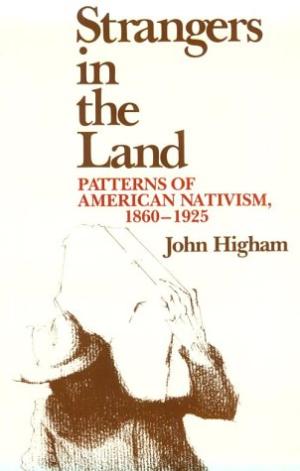 Higham’s Strangers in the Land
can aide our reading of America’s current conditions.

Higham sees two factors in American history as time and again encouraging nativist outbreaks: economic depression and new waves of immigration.[4] A third factor, which only came to the forefront after WWI, was the association of foreigners with crime.[5] Higham discusses the panic of 1893 as an economic depression encouraging nativist outbreaks. According to Higham this national economic breakdown needed not to have led to nativism but did so because it “came at a more anxious moment and afflicted a society less confident of its general state of health”.[6] The parallel with the contemporary United States is remarkable, with the 2008 financial crisis serving as the placeholder of the panic of ’93. The economic crisis of 2008, like 1893, can be seen as a “combined social and economic breakdown”[7] that has bred the kind of atmosphere in which nativism is fostered and flourishes.  Moreover, immigration to the US has been on the rise over the past few years.  In our day and age, the immigrant is once again tarred with the brush of criminal association and portrayed as “a lawless creature given over to violence and disorder”,[8] thus following Higham’s pattern. Without resorting to crystal-ball gazing, it is not unlikely that we find ourselves in a similar transitionary phase as the Second Industrial Revolution with which the nativist resurge is well-paired. In short, the circumstances for a blooming nativism, as defined by Higham, were all present or building up during the Obama years and found catharsis in the 2016 election.

In addition to explanatory factors, Strangers also offers a number of other remarkable parallels. For instance, libellous nativist propaganda, ‘fake news’ avant la lettre if you will, seems to have played its part in earlier American nativist movements. Higham discusses the dissemination of the Protocols of the Elders of Zion in the US,[9] but also includes in his story the anti-Catholic American Protective Association’s (A.P.A.) distribution of their “Instructions to Catholics”, a supposed papal document instructing Catholics to start a run on the banks in order to disrupt the economic system.[10] Additionally, the Patriotic American, a newspaper owned by the A.P.A. president, printed a bogus encyclical, instructing American Catholics “to exterminate all heretics”.[11] Similarly, in the summer of 1918, “stories circulated in the United States to the effect that the Kaiser actually controlled the Soviet régime”,[12] stories which were confirmed by the Committee on Public Information.[13]

In the anti-German sentiment of the first world war, we might see a predecessor to the current Islamophobia. During the war, Germans fell subject to the charge of disloyalty: “the gravest sin in the morality of nationalism”.[14] In this day and age, American Muslims are subject to this same charge. Even Mr. Trump’s remark that Muslims were cheering in New Jersey when the Twin Towers fell could have come directly from the century-old anti-German playbook, as by August 1915, “there was common talk that German-Americans were rejoicing over the death of American citizens on torpedoed ships”.[15]

On a more structural level, Higham recognised three sub-strands as the main currents in American nativism: anti-Catholicism, anti-radicalism and racism.[16] It is possible Islamophobia became such a potent force because it taps into all three of these sub-strands. It can be seen a combination of religious, radical and racial xenophobias: as anti-clerical, anti-radical, and anti-oriental. 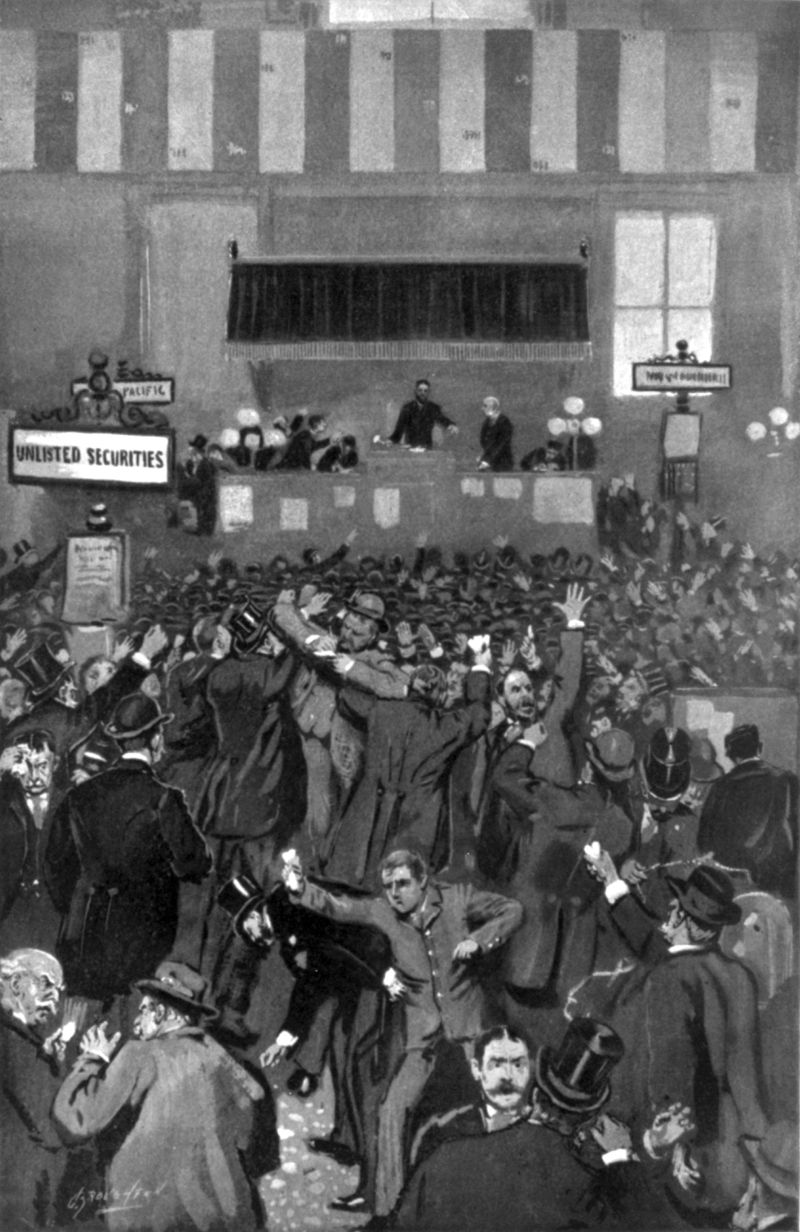 “The recent panic scene in the New York Stock Exchange on the morning of Friday, May 5th.” Illus. in: Frank Leslie’s Illustrated Newspaper, 1893 May 18, p. 322. United States Library of Congress’s Prints and Photographs division.

These parallels are superficial however when compared to two other lessons for the present we can draw from Higham. The first is his linking of nativism and jingoism for having a basis in the same “aggressive psychology”:

when the troubles of the nineteenth century raised doubts of the nation’s stamina, two short cuts for restoring confidence presented themselves: disunity might be rationalized as a product of foreign influence, or denied by a compensatory demonstration of national virility. One response led toward protective measures at home, such as immigration restriction; the other encourages an offensive posture abroad.[17]

Whilst the present foreign policy contours are avowedly protectionist and isolationist, they can nonetheless be characterised as offensive posturing. The sense of crisis presented by Mr. Trump in his inaugural so far appears to have given rise to this very same duality.

The second lesson might be one for the longue durée. One of Higham’s main points was that in spite of America’s deep-running democratic national culture, subsiding anti-foreign movements still permanently stain the national fabric: they submerge but don’t dissolve.[18] As Higham put it:

History may move partly in cycles but never in circles. With every revolution some new direction opens, and some permanent accretion is carried into the next phase. Each upthrust of nativism left a mark on American thought and society.[19]

If Sinclair Lewis’ It Can’t Happen Here, is “the classic novel that predicted Trump”,[20] Higham’s Strangers is the closest non-fiction counterpart in which we find an ever relevant analysis of an American nativism that has proven to be a fundamental aspect of Trumpism. Higham’s work reminds us that, in what might be seen as the American manifestation of a transatlantic right-wing populist upsurge, there are distinctly homegrown and deeply rooted undercurrents at work. In that sense, a rereading of Higham’s book might serve as a cure for myopia. Notwithstanding his thesis on “permanent accretion”,[21] Higham was hopeful about the influence of nativism in the long run:

one can scarcely doubt that again, as in previous eras, a democratic balance-wheel, working deep inside the national culture, partially counteracted the nativist movements […] the nation’s traditional values undoubtedly exercised a quiet break on xenophobia.[22]

Let us hope that they will again.

[12] Whilst grossly exaggerated and inaccurate, this claim is not entirely without factual basis as it was Imperial German policy in 1917 to aid the Bolsheviks.

Documenting Donald: A Trans-Media Post-Mortem about Documentary-Making during the 2016 Presidential...
Media Coverage and the Presidential Election of 2016: Introducing the Series
Counterpublics and the New Dynamics of Contemporary Conservatism: From the Tea Party to the Trump Mo...

Simon van Oort read US History, and Jurisprudence and Philosophy of Law at the universities of Oxford (MSt) and Leiden (LLM). He wrote his MSt dissertation on the origins and uses of the phrase 'Founding Fathers' (supervised by Dr. Gareth Davies) and his LLM dissertation on the history of the Dutch constitutional ban on judicial review (supervised by Prof. Andreas Kinneging). He currently works as a trainee legislative adviser and writes in a personal capacity.
View all posts by Simon van Oort →
Tagged  C20, C21, History, Nativism, Politics, Trump, WWII.
Bookmark the permalink.