Storify for #bookhour chat on ODDS AGAINST TOMORROW by Nathaniel Rich 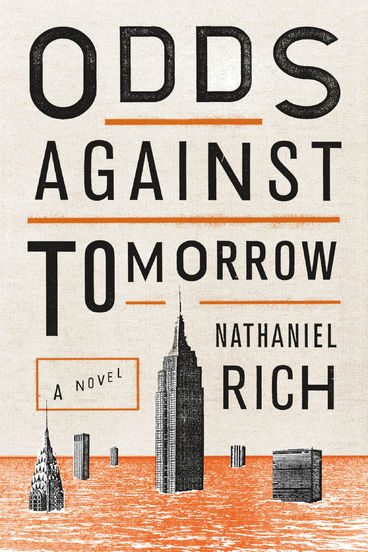 On Tuesday 30th August 2016, Dr Arin Keeble and Dr Lieven Ameel (with questions from Dr Sebastian Groes) joined #bookhour organiser Christina Brennan to discuss Odds Against Tomorrow (2014) by Nathaniel Rich. The discussion explored themes of visibility and time in relation to large-scale environmental decline and climate change. The conversation considered questions relating to ‘slow violence’ and its framing devices in contemporary literary; state complacency in the face of climate change; and the representation of disaster after 9/11. Other themes included questions of individual agency in the aftermath of environmental catastrophe and the ethics of prediction and algorithms in monitoring disaster.

New York City: The Near Future: Mitchell Zukor, a gifted young mathematician, is hired by a mysterious new financial consulting firm, FutureWorld. The business operates out of a cavernous office in the Empire State Building; Mitchell is employee number two. He is asked to calculate worst-case scenarios in the most intricate detail, and his schemes are sold to corporations to indemnify them against future disasters. This is the cutting edge of corporate irresponsibility, and business in booming.

As Mitchell immerses himself in the mathematics of catastrophe – ecological collapse, global war, natural disasters – he becomes obsessed by a culture’s fears.  Yet he also loses touch with his last connection to reality: Elsa Bruner, a friend with her own apocalyptic secret, who has started a commune in Maine. Then, just as Mitchell’s predictions reach a nightmarish crescendo, an actual worst-case scenario overtakes Manhattan. Mitchell realises he is uniquely prepared to profit. But at what cost?

1. Odds Against Tomorrow tells the story of an acute catastrophe. Can literature deal with the challenges of slow catastrophe, especially those related to ecological crisis?

2. What does the Psycho Canoe evoke or symbolise in Odds Against Tomorrow?

3. Which real world disasters does Hurricane Tammy in the novel most strongly evoke?

4. How does the novel suggest how we can continue being human in an age of algorithmic prediction?

5. How are agency and responsibility for the future framed in Odds Against Tomorrow, and what can it tell us about literature in times of crisis?

Arin Keeble (@KeebleArin) is Lecturer in English Literature at Nottingham Trent University. Arin works in a range of areas within contemporary literature and culture and has published widely on the ‘9/11 novel’. Currently he is preparing a new monograph that explores the ways in which narratives of Hurricane Katrina have engaged with both that catastrophe and the politics of the War on Terror.

Lieven Ameel (@lievenameel) is University Lecturer of Comparative Literature at the University of Tampere, Finland. His research interests include narratives in urban planning and experiences of urban space in literature. Together with Sirpa Tani he has also published several articles on the discipline of parkour. Recent publications include Helsinki in Early Twentieth-Century Literature (SKS 2014) and the co-edited volumes Literature and the Peripheral City (Palgrave 2015) and Language, Space and Power: Urban Entanglements (COLLeGIUM 2012). He regularly writes about his research on his blog: blogs.helsinki.fi/urbannarratives/.”

Christina Brennan (@cmbrennan_) is a PhD in the division of English Literature and American Studies at the University of Manchester, UK. Her thesis examines representations of natural disaster in cities in late twentieth-century and twenty-first-century North American fiction. She previously studied at the University of Leeds and her wider research interests include literature on war, migration and displacement in the United States.