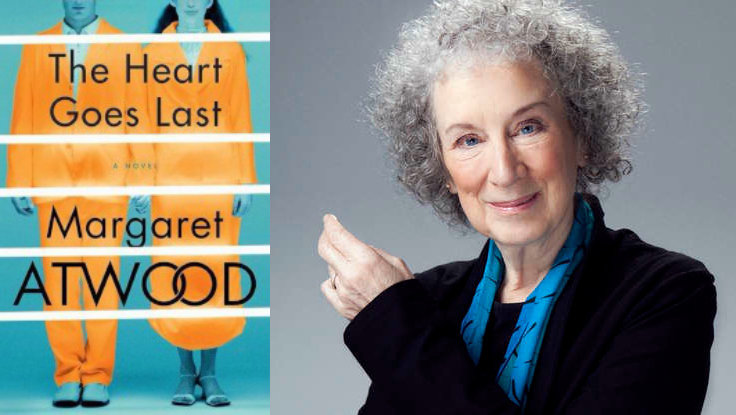 During November’s #bookhour, Sam Cooper, Terri-Jane Dow, Dr Karma Waltonen, and #bookhour organiser Dr Diletta De Cristofaro discussed Margaret Atwood’s latest dystopia, The Heart Goes Last (2015). The chat considered the satiric aspects of Atwood’s novel, the characters, and the narrative focalisation – elements which sparked debates around the believability of the plot. The discussion also focussed on the notions of utopia and dystopia, on the role of surveillance and desire in the Positron Project, on the economic crisis and the text’s suburban imagery. Catch up on the chat below.

Q1 Most reviewers agree this novel is comic satire–what’s funny to you, and why?

Q3 Just prior to THGL’s release, Atwood penned an opinion piece (http://www.theguardian.com/books/2015/sep/18/margaret-atwood-we-are-double-plus-unfree) arguing that, in the digital age of surveillance, we’ve willingly “surrendered too many of our hard-won freedoms”. How effectively does THGL probe this idea?

Q4 How does THGL present the American Dream? What’s the significance of the “utopian” 1950s suburbia of Consilience vs the economic crisis?

Q5 How believable is Atwood’s dystopia?

Q6 The Positron project tries to quash human desire in its workers, but encourages it in others (e.g. with sexbots) – does the unpredictability of desire cause the project’s failure?

Sam Cooper (@sjcooper3) is a PhD candidate and Teaching Associate at the University of Nottingham. His research explores the ways in which contemporary North American writing employs polysemy and narrative fragmentation in order to deconstruct the language, logic and spatiality of neoliberalism. Sam’s research interests include critical theory, poetry and poetics, space and globalisation, and the encyclopaedic novel.

Diletta De Cristofaro (@tedilta) is a Visiting Research Fellow at the University of Nottingham, where she was recently awarded her doctorate. Her PhD thesis deals with time and history in twenty-first-century post-apocalyptic fiction and, in particular, with the nexus between the conception of history featured in these novels and that of postmodern theories. Diletta’s research interests include apocalyptic and post-apocalyptic fiction, utopias and dystopias, contemporary Anglo-American writings, and critical theory. Diletta has published on Jim Crace and Cormac McCarthy.

Terri Jane Dow (@terrijane) is a writer, editor, and independent researcher, working mainly on gender, dystopias, and post-apocalyptic North American fiction. She graduated from her MSc in American Literature at the University of Edinburgh in 2014, and edits Severine Literary Journal in her spare time.

Willa’s Maternal Ethics of Care in Gloria Naylor’s Linden Hills
Storify of our #bookhour twitter chat on EUPHORIA by Lily King
Review: ‘Collaboration in America and Collaborative Work in American Studies’
Latinos and the Language Question: Arizona, 1967-70
Storify of our #bookhour twitter chat on MAÑANA MEANS HEAVEN by Tim Z. Hernandez
Exploring the French Caribbean and Joseph Zobel
“An Eagle On His Button”: How Martial Portraiture Affirmed African American Citizenship in the Civil...
Not Your Grandparents’ Grand Strategy: Rethinking Liberal Hegemony