Home » #ussobookhour » Storify of #bookhour chat on BLACK DOVE: MAMA, MI’JO AND ME by Ana Castillo

Storify of #bookhour chat on BLACK DOVE: MAMA, MI’JO AND ME by Ana Castillo 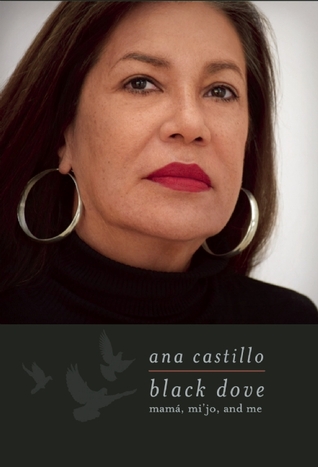 On September 27th 2016, #bookhour organiser Donna Alexander, and Jessica Shine, Zalfa Feghali and Aishih Wehbe discussed Black Dove: Mamá, Mi’jo, and Me  by Ana Castillo. The dominant theme of their #bookhour chat was motherhood. They considered the centrality of maternity and cross-generational relationships among women in Castillo’s Black Dove, as well as other books in her oeuvre. They also considered the ways in which motherhood is interwoven with identity in terms of race, class, gender and sexuality. Discussion leaders also investigated the role of activism in her writings, the expression of Xicanisma, and how even her choice of small, independent publishers is an act of resistance. The #bookhour closed with a consideration of the memoir genre, how Castillo and other Chicana writers of her generation play with and formally disrupt the memoir genre, Black Dove demonstrates that the act of remembering one’s past goes beyond traditional narrative linearity.

Acclaimed Chicana feminist author and scholar Ana Castillo writes about childhood poverty, motherhood, raising a son in contemporary America, and dealing with his time in prison in Black Dove: Mamá, Mi’jo, and Me (2016). Among her award-winning and celebrated titles are, The Mixquiahuala Letters (1986), Peel My Love like an Onion (2000), and Watercolor Women/Opaque Men: A Novel in Verse (2005). From her mother to her own motherhood, the essays in Black Dove: Mamá, Mi’jo, and Me looks at what it means to be a single, brown, feminist parent in a world of mass incarceration, racial profiling, and police brutality. Through startling humor and love, Castillo weaves intergenerational stories traveling from Mexico City to Chicago. And in doing so, she narrates some of America’s most heated political debates and urgent social injustices through the oft-neglected lens of motherhood and family.” (Feminist Press)

The essays in this memoir are set against the socio-political backdrop of 20th and 21st century America, the echoes of her childhood memories, the obstacles she and her family faced as Mexican Indian immigrants in the 1970s, and the songs her mother sang to her.

Q2. What elements if any of motherhood as described by Castillo transcend cultural/class/race. Is motherhood a universal experience? (Jessica Shine)

Q3. How do themes of matrifocality and intergenerational conflict run through Black Dove? How does Castillo’s treatment of masculinity feed into this? (Zalfa Feghali)

Q4. How might Castillo’s account of race relations (both as a child/young person and as a mother) play into contemporary questions of race and racial identity in the US and Mexico? (Zalfa Feghali)

Q5. In what ways Black Dove reads as a continuation of Castillo’s vindications throughout her work, and If so how, and from what space? (Aishih Wehbe-Herrera)

Q7. Castillo’s book includes song, email, and her son’s writings. What is the significance of her play with the memoir genre? (Donna Alexander)

Zalfa Feghali is a lecturer in American Literature in the Department of English and the Centre for American Studies at the University of Leicester. Her research on contemporary North American writing intersects US borders, reading and literacy studies, and citizenship, and her first book, Crossing Borders and Queering Citizenship: Civic Reading Practices and American and Canadian Writing is contracted with Manchester University Press.

Jessica Shine is a lecturer in CIT’s Department of Multimedia. She teaches on a range of courses including Creative Strategies, Interpreting Sound and Music, Digital Culture and Media Projects. She completed her PhD in UCC on sound, music, and collective auteurism in Gus Van Sant’s Death Quartet.

Aishih Wehbe-Herrera holds a Phd in Gender and Chicano Studies by University of La Laguna and an M.A. in Human Rights from Columbia University (NY). She has researched and published extensively on the work of Ana Castillo and she interviewed her in a number of occasions. She currently works as international consultant on gender and human rights issues, and she is collaborating as research fellow at the GENOVATE project, coordinated by the University of Bradford.