On 28th March 2017,  USSO hosted a #bookhour to discuss Claire Vaye Watkins’ Gold Fame Citrus (2015). During the discussion Dr Iain Williams, Pat Massey, Hollie Johnson and Christina Brennan discussed the tensions between ‘Deep time’ and climate change in Watkins’ novel, and to what extent these issues were filtered through a narrative of American exceptionalism. Debates arose around whether Gold Fame Citrus could be classified as climate fiction (or ‘cli-fi’), and gender relations in Watkins’ novel (particularly in light of Watkins’ autobiographical history as a member of the Charles Manson family). The panellists ended the discussion by discussing the symbolism of children in climate and post-apocalyptic narratives, and left the #bookhour asking about the value of realist vs experimental fiction in depicting climate change. 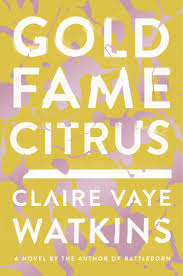 Dr Iain Williams (@IainWilliams1) who is a postdoctoral English literature tutor at the University of Edinburgh, specialising in contemporary U.S. literature. His current research project is investigating the relationship between Deep Time and water.

Pat Massey (@MasselinesSt) is a second year-PhD student a the University of Manchester. His thesis title: New Orleans Exceptionalism in the Cultural Response to Hurricane Katrina. Academic preoccupations outside of Louisiana: instances of and reactions to natural disaster; the relationship between music and literature; the mysterious art of Pecha Kucha.

Hollie Johnson (@HollieD_Johnson) is a final-year PhD student at the University of Nottingham. Her thesis focuses upon the recent environmental turn of dystopian novels after 1950, thereby moving away from reductively anthropocentric scholarly accounts of dystopia. Her project engages with the ongoing discussions around nature and environment with the specific aim of clarifying what an ecocritical approach can bring to the understanding of recent dystopian fiction.

Christina Brennan (@cmbrennan_) is a PhD student in the division of English Literature and American Studies at the University of Manchester, UK. Her thesis examines representations of natural disaster in cities in late twentieth-century and twenty-first-century North American fiction. She previously studied at the University of Leeds and her wider research interests include literature on war, migration and displacement in the United States.

Champions of Compassion: The American Council of Voluntary Agencies for Foreign Service and Cold War...
Keynote Competition 2018
An Assessment of the American Civil War Sesquicentennial
From Trinity to Trump: The Politics of Nuclear Memory in the 2020 Election
Teaching America 'Online': Designing and delivering the Online Distance course ‘A History of the Blu...
BOOK REVIEW: THE QUIET CONTEMPORARY AMERICAN NOVEL, BY RACHEL SYKES
Review: Pursuing the Rooseveltian Century
Review: IAAS Postgraduate Conference, 'E Pluribus Unum: Out of Many, One'