‘Still being sent to Nam to protect America’s myths’: Anti-war Soldiering and the Challenge to Cold War Patriotism

Part I: Anti-war Activism within the Military

‘Still being sent to Nam to protect America’s myths’: Anti-war Soldiering and the Challenge to Cold War Patriotism

Part I: Anti-war Activism within the Military

This is the first post in a two-part series considering anti-war activism among soldiers and veterans during the Vietnam War. Much of the primary source material for the posts came from the Wisconsin Historical Society, who awarded Lauren with a grant to work in their archives. With thanks to The Friends of the University of Wisconsin-Madison Libraries for their financial assistance and support of this research.

In September 2017, Trump made a provocative criticism of American football players taking a knee to protest racial injustice.  Taking to his favourite medium, he wrote the following tweets: 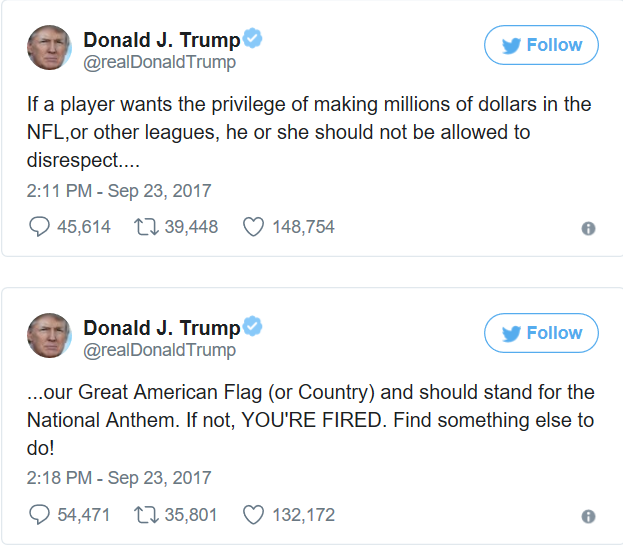 In equating a protest against institutional racism with disrespecting the flag, Trump tapped into a deeply held popular narrative: respect for the flag is an essential performance of one’s national loyalty and patriotism.  Conversely, any lack of reverence to the flag or other traditional patriotic symbols is seen to disparage the sacrifice and memory of American soldiers, past and present. Consciously or unconsciously, public empathy with this perspective draws on one of the central paradigms of national mythology that is ingrained in American consciousness: that of the loyal and patriotic American soldier defending global democracy. As a defender of global freedoms, popular American patriotism suggests that their sacrifice and task is unassailable. But, what happens when the troops themselves deem their own service to be unpatriotic and undemocratic?

The militia’s role in defeating the British during the American Revolution linked the patriotic defence of the nation to the sacrifice of its citizen-turned-soldier from the very beginning of the nation’s history.  After the Civil War, reunification efforts foregrounded the uncritical support of the sacrifice of soldiers as North and South emphasised reunion around the valorous nature of the fight and the sacrifice of soldiers defending their cause, irrespective of the specifics of that cause.  The World Wars further solidified the idea that all American citizens should provide unwavering support to the nation’s military efforts, and the inception of the Cold War made it national canon as dissent became equated with communist influence. After all, the fate of democracy itself was seen to be at stake – anyone against defending democracy was considered to be ‘un American’.[2]

However, during the Vietnam War, a significant number of soldiers rejected the equation of patriotism with unquestioning obedience. A 1971 Army study suggests that over 50% of active duty soldiers engaged in some form of dissent during their service.[3]  Rejecting popular Cold War patriotic mythology, these activist soldiers deemed the military an authoritarian institution and a tool of oppression wrought by an imperialistic America. In doing so, they challenged the official Cold War depiction of the United States as the protector of global democratic ideals against an evil, totalitarian communist ideology. Despite being considered unpatriotic for their dissent, these soldiers grounded their opposition in the familiar symbols and language of American patriotism. Activist servicemen repurposed traditional narratives to construct an incisive critique of the nation’s conception of itself; an effort which scholars and contemporaries agree significantly impacted Nixon’s ability to prosecute the war. In 1971, an article in the Armed Forces Journal declared, ‘by every conceivable indicator, our army that now remains in Vietnam is in a state approaching collapse…elsewhere than Vietnam, the situation is nearly as serious,’ and cited soldier dissent as a primary factor.[4] Similarly, historian Penny Lewis concluded, ‘historians and participants in the GI movement conclude that the mutinous conditions of the army as a whole made it impossible for the brass to fight the kind of war they wanted to fight.’[5]

American policy makers ostensibly argued US intervention in Vietnam was essential to prevent the spread of communism.  However, beginning in 1966, soldiers began to build an anti-war network within the military itself to challenge this official messaging. Given the restrictive nature of military life, much of this initial activism occurred within the pages of underground GI newspapers such as the Fort Hood based Fatigue Press, and The Chessman, published at a base in South Carolina. Instead of providing a defence of the nation by ‘patriotically’ accepting and executing existing foreign policy, GIs argued in these papers that true patriotism meant defending the ideals of the nation. For these anti-war GIs, the war in Vietnam was being waged counter to American ideals.

While US policy makers were claiming to defend the democratic freedoms of the Vietnamese, activist GIs challenged Cold War rhetoric to paint the US as a tyrannical oppressor.  Significantly, GIs saw their protest as a continuance of the American tradition, rather than a challenge to it. They equated present-day US policy with the Revolutionary War era British to paint the US as an enemy of democracy and freedom.  ‘Today’s Establishment is the new George III’ declared one GI at Fort Jackson. He told readers, ‘your uniform might not be British red – – but you represent the same tyranny.’ [6] If American soldiers were equivalent to British troops, GIs argued that the Vietnamese were analogous to America’s Revolutionary patriots.  The Fatigue Press described the Vietcong as today’s Minutemen and concluded that ‘in 1776, we were the Vietcong.’  Similarly, an image appearing in P.E.A.C.E depicts a Vietnamese man in the image of Paul Revere re-enacting his famous ride to warn of an approaching enemy. Thus, US involvement in the Vietnam was not presented as a patriotic defence of democratic ideals, but rather a tyrannical overreach of US policy makers. As the editorial staff of the Iceland-based Stuffed Puffin declared, ‘these dangerous and provocative and unconstitutional acts must be opposed and the spirit of the American Revolution rekindled.’[7] 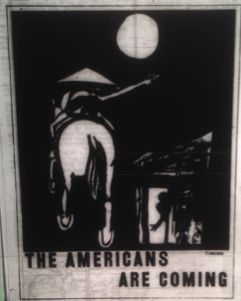 This spirit of the American Revolution further inverted popular Cold War patriotism by attempting to dismantle the popular equation between unquestioning loyalty and patriotism.  In this iteration, activist GIs’ challenge to Cold War policy was far from unpatriotic.  It was seen to be their essential democratic duty.  Writing in The Chessman, one GI declared ‘we volunteered to defend and uphold the Constitution…it is our duty to oversee and reverse these denials and to secure and preserve our country’s freedom.’  To neglect this duty is to ‘be a traitor to the ideas and ideals our country is built on.’[8]  Similarly the editorial staff of the Fatigue Press, declared that as soldiers, ‘If anything we are even more responsible, because it is our duty to defend…the laws and principles on which this country has been founded.’[9]  Thus, the truly patriotic fight was seen to be the fight to defend American ideals of freedom and justice.  Grounding their dissent in patriotic mythology, GIs also emphasised the dissident origins of the American Revolution to firmly fix their understanding of patriotic duty within the American story. As one GI writing in Flight Flight noted, ‘most of our elders accuse us of being unpatriotic…George Washington was told not to rock the boat by the majority of colonists, so it’s nothing new in America.’[10]  Indeed, activist GIs argued that when American policy went against American ideals, their true duty was to these ideals.

A monument at Concord Bridge in Massachusetts, the site of one of the first battles of the American Revolution, reads, ‘they came three thousand miles and died to keep the past upon its throne.’ However, under this monument’s image, depicted in Napalm, the paper asks ‘what will be inscribed in memory of the American soldiers who die fighting the Vietnamese?’[11]  By suggesting that American men fighting in Vietnam were akin to the tyrannical British on the eve of the Revolution, activist GIs posited a profound challenge to popular Cold War mythologies.  As the true patriots defending American ideals, GIs argued that the blind patriotism of the Cold War did not support the fight to preserve global democratic freedoms, but instead actively damaged them.  As patriots of a second Revolution in defence of democratic ideals, the real patriotic fight was still to be fought at home.  Vietnam veterans, home from war, felt similarly compelled to engage in this defence of American democratic ideals.

[2] Ellen Schrecker, Many Are the Crimes: McCarthyism in America (Princeton, NJ: Princeton University Press, 1999).  One of the main apparatuses in this anti-communist effort was the House Un-American Activities Committee which was charged with investigating ‘alleged disloyalty and subversive activities on the part of private citizens, public employees, and those organizations suspected of having Communist ties.’  The Committee operated from 1938-1975. Critics argued that the committee targeted people for their political beliefs rather than on the basis of actual evidence of wrong doing.  For more information see: https://www2.gwu.edu/~erpapers/teachinger/glossary/huac.cfm

'Is It Because I’m Black?': The Music Industry, Image, and Politics in the Careers of Syl and Syleen...
When a novel changes a social system: Mary Jane Ward’s The Snake Pit (1946) and the US state psychia...
Live Human Exhibits: The World Columbian Exposition as a Space of Empire
‘[S]omething to feel about’: Zora Neale Hurston’s Barracoon: The Story of The Last Slave
The Importance of Sherry Receptions; or, Where Are All The Women In This Archive? First Impressions ...
Our Latest Longest War: Losing Hearts and Minds in Afghanistan
The Southern Student Organizing Committee and the White New Left
Black History Month Roundup: U.S. Studies Online Special Series

Lauren Mottle is in the third year of her PhD at the University of Leeds. She is originally from the United States and completed her Masters at the University of North Carolina at Greensboro. Her research explores the anti-war activism of soldiers and veterans during the Vietnam War. Specifically, her research interrogates how this activism reshaped the relationship between citizenship and soldiering in the United States. She is supervised by Prof. Simon Hall and Dr Jessica Meyer.
View all posts by Lauren Mottle →
Tagged  Activism, C20, Cold War, Communism, History, Protest, Veteran, Vietnam, Vietnam War, War.
Bookmark the permalink.