After grappling for some time with a particular question in my current research, I was struck by the possibility that music might offer a way into the problem. For a while I had been trying to understand how far the South of the 1920s may have remained culturally influenced by the collective memory of the Civil War and the Confederacy. As a way of trying to get to grips with this issue, I have been thinking about how much the Civil War’s legacy can still be perceived in the popular culture of the southern United States today. 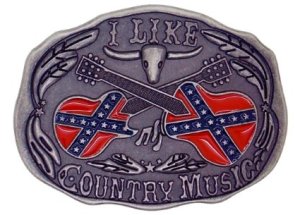 Given that country music is arguably the modern-day South’s most famous cultural export, it is possible that references to the Civil War in modern country music could give an insight into this question. There is a perception that ‘country music,’ in its various guises, is an overwhelmingly white phenomenon which is, at least to some extent, a product of its well-known links to the American South.[1] This assumption has been challenged, most recently by Diane Pecknold’s examination of the African-American impact on the country genre, which Glen Whitcroft recently reviewed. If, though, we accept the contention that country music can be some kind of representation of ‘whiteness,’ this raises questions about whether references to the Civil War in country music might be influenced by the tradition of the Confederacy’s ‘Lost Cause.’ The Lost Cause is a trope which David B. Parker has described as a white southern re-telling of history that defends and justifies southern secession and antebellum society.[2] If a link could be discerned between the Lost Cause and modern country music, this relationship may tell us something about how the present-day South thinks about the memory of the Civil War and about the defeat of the Confederacy.

Rather than doing an extensive search for any country songs that might mention the Civil War, I have instead focussed on the four examples within my own record collection which refer to the war, in the hope that these few cases can offer an insight, albeit limited, into the meaning of the Civil War for modern country musicians. These four songs probably fall into the category of ‘alternative country,’ a genre which is difficult to define but which arguably draws on traditional roots music from the south-eastern US, such as bluegrass, folk and rock. The songs have all been released since 2004 and all are by white musicians who hail from the South.

‘Carry Me Back To Virginia’ by Old Crow Medicine Show (from ‘Carry Me Back,’ ATO Records, 2012) tells the story of a soldier serving in Robert E. Lee’s Army of Northern Virginia. Narrated in the first person and delivered in a barnstorming bluegrass style, the song tells of the young soldier’s initial enthusiasm to give the Union a bloody nose. As the campaign progresses, however, the terrible conditions which confronted the Confederate foot soldiers leave the young man wanting nothing more than simply to go home. The soldier tells of how the Confederate fatalities were buried all over the South – on whichever battlefield they fell – and voices his wish to be buried at home in Virginia should he be killed. The only motivation for fighting which the song offers is that of loyalty to one’s home state – the impact of the wider political and cultural milieu of the 1850s and 60s is not raised. Ultimately, the song is a powerful expression of the meaning of ‘home’ in war and, by the end, the anonymous soldier seems to care much more about being at home, either alive or dead, than about winning the war.

The spectre of General Lee also hangs over Chatham County Line’s ‘Final Reward’ (from ‘Tightrope,’ Yep Roc Records, 2014). This song mourns a dead soldier who had seemingly held an almost messianic devotion to Lee and to the Confederate cause. While not shying away from the loyalty which many Confederate soldiers seemingly had for commanders like Lee, the band laments the fraternal destruction of the war and offers an appeal for American unity under one flag – that of the Union. The song mourns the physical destruction unleashed on the interior of the South by Union forces during the latter stages of the war, conflating the destruction of the southern landscape and the death of its soldiers. We can here perceive a complex presentation of the meanings of the Civil War, in which the death and destruction inflicted on the South are worth mourning but in which the national fractures of the war are also deeply regretted. The fact that Robert E. Lee is mentioned by name in both ‘Carry Me Back To Virginia’ and ‘Final Reward’ may suggest that Lee is still held in high regard and is possibly seen as something of a folk hero in southern recollections of the war. It may even be the case that Lee is offered up as a representation of ‘the good Confederate,’ whose memory it is acceptable to venerate.

Justin Townes Earle’s ‘Lone Pine Hill’ (from ‘The Good Life,’ Bloodshot Records, 2008) tells the personal story of another Army of Virginia man. Again narrated in the first person, this song ends with a plea for divine forgiveness. Earle’s foot soldier provides the most overtly political statement to be found in these four songs, saying that he’d never personally known anyone who owned slaves – in fact, he’d never owned anything of his own. Here we can see an attempt to differentiate the ‘ordinary’ soldier, fighting for his homeland, from the overarching economic and political aims of the Confederate leadership. The soldier claims that, after four long years of war, he still doesn’t know what he’s been fighting for. The song seems to set up a dichotomy between the slave-owning southern aristocracy on the one hand, and the largely impoverished, rural white working-class on the other. This class critique would appear to fit with country music’s traditional emphasis on the working-class rather than the elite experience.[3] By essentially blaming the southern aristocracy for driving secession and war, it is possible that ‘ordinary’ white southerners are thereby able to rationalise the difficult memory of the conflict and apportion responsibility for bringing it about.

My final example, ‘Magnolia Mountain’ by Ryan Adams & the Cardinals (from ‘Cold Roses,’ Lost Highway, 2005), contains the least obvious reference to the war. The song seems to be about redemption in general and appears to invoke the southern countryside as an otherworldly, almost mystical landscape. Adams evocatively summons the ghosts of war with descriptions of burning cotton fields and emotional scars. Adams implies that these scars were passed to future generations through a resulting popular memory of ruin. As in ‘Final Reward,’ we see a lament for the destroyed landscape of the South and for the wounded memories of its inhabitants. Ultimately, it may be through a focus on the destruction of the southern landscape, rather than on the political aspects of secession, that white southerners are able to present a politically neutral and therefore morally respectable method of remembering and mourning the defeat of the South. Additionally, the focus on ‘ordinary’ foot soldiers in ‘Lone Pine Hill’ and ‘Carry Me Back To Virginia’ indicates a class-based method of praising the defence of the South while heaping the burden of blame onto wealthy aristocratic warmongers.

These modern songs suggest that a collective memory of the war may still play an important part in how southerners think about themselves and about what happened in the 1860s. Each of these songs link into what Geoff Mann has called country music’s ‘narrative of loss,’ in that they recall and reconstruct what has allegedly been lost in history – on material, emotional and personal levels.[4] The power of these four songs lies primarily in that sense of loss, rather than in any particular political or martial themes. Perhaps then, these songs form part of what has been called a ‘mild version’ of the Lost Cause,[5] in that they present the memory of the Civil War as a way of both commemorating their ancestors and of supporting the United States.

[5] Parker, ‘The soldier, the son and the social scientist.’

Raymond Carver: Thirty Years On
Book review: Blue Collar Broadway: The Craft Industry of American Theater by Timothy R. White
Video Games and American Studies: Introduction to the Series
Review of Culture and the Canada-U.S. Border 2014 Conference
Review: 'The Historical "Dispute of the New World": European Historians of the United States and Eur...
Cyborgs, Simians and San Francisco (part one) - Bodies and the American West
60 Second with Sage Goodwin
Black History Month Post: ‘All Englishmen Were Not Shakespeares’: William Craft’s Attack on Scienti...