This is the fourth post in a special series exploring and discussing artefacts from a selection of Adam Matthew Digital collections. This article uses primary sources from the ‘World’s Fairs’ collection, which can be accessed here. 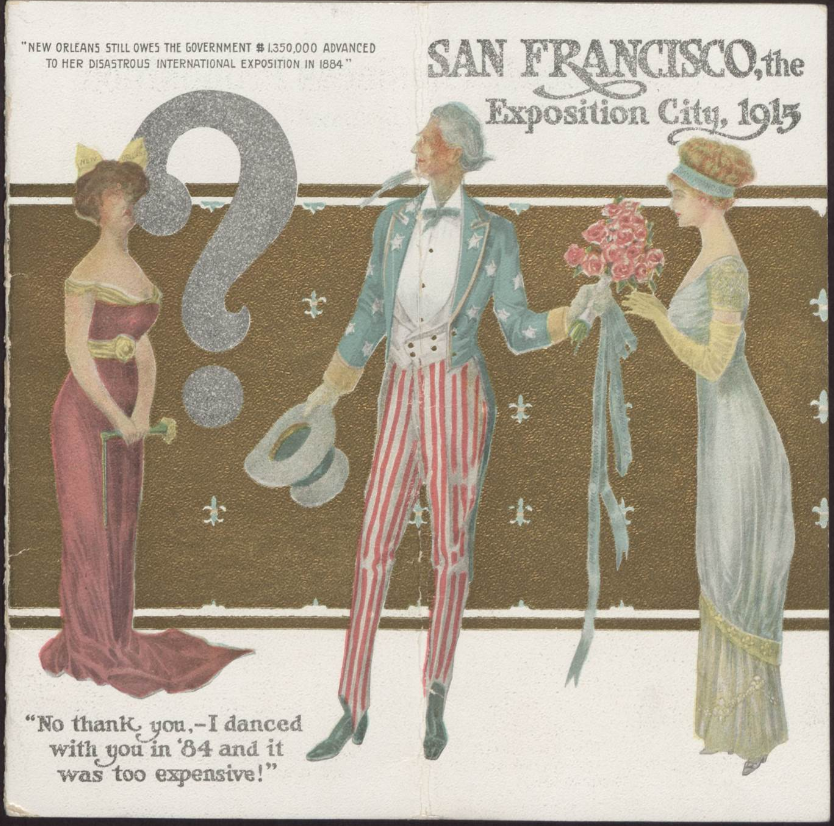 Enumerating the reasons why San Francisco rather than New Orleans should receive federal sanctioning for the 1915 exposition celebrating the completion of the Panama Canal, this illustrated pamphlet urged readers to acquaint themselves with the wonders of the Pacific Coast and to “See America First”. As the first global gatherings of mass audiences, expositions – or world’s fairs – assembled the world in a single site. Designed to showcase the host nation’s progress and achievements, world’s fairs also played an important nationalising function; a task of particular significance for a nation of relative youth like the United States. Encapsulating the local, national, and international imperatives of the world’s fair form, the pamphlet demanded that readers decide, “Who should succeed?”

America has not held a world’s fair since 1984. The host city that year was New Orleans, and the event was a financial failure – the same fate that had befallen that city’s first exposition exactly 100 years earlier, and was the central argument in San Francisco’s successful bid for the 1915 event. In 2001, the US withdrew from the regulatory Bureau of International Expositions, casting into doubt whether the nation would again host a world’s fair, or whether its “isolationist sensibilities” would be further entrenched.[1]

As the ever diversifying body of literature on expositions affirms, these events show us a great deal about the worlds they inhabited and shaped. The Adam Matthew digital collection ‘World’s Fairs: A Global History of Exposition’ provides a much needed order to the abundance of primary materials by organising the collection both by fair and by key exhibits, from aeronautics to visual culture. By including materials encompassing the fairs from first plans to final product, the collection also permits researchers to delve into the lesser studied realms of the fairs planned but never held, the exhibits closed due to their failure to capture the audience’s attention, and the intense public relations campaigns behind the often impressive gate receipts.

The tactics employed in the San Francisco promotional pamphlet demonstrate that exposition boosters weren’t beyond making their campaigns dirty. Promising “No ‘One-Night Stands’ for this Star”, the pamphlet bombarded readers with supporting arguments that ranged from the Western city’s superior weather and amenities, to its relative proximity to the newly completed Panama Canal. Its centre-piece however, focused on the demographics of the competing cities. 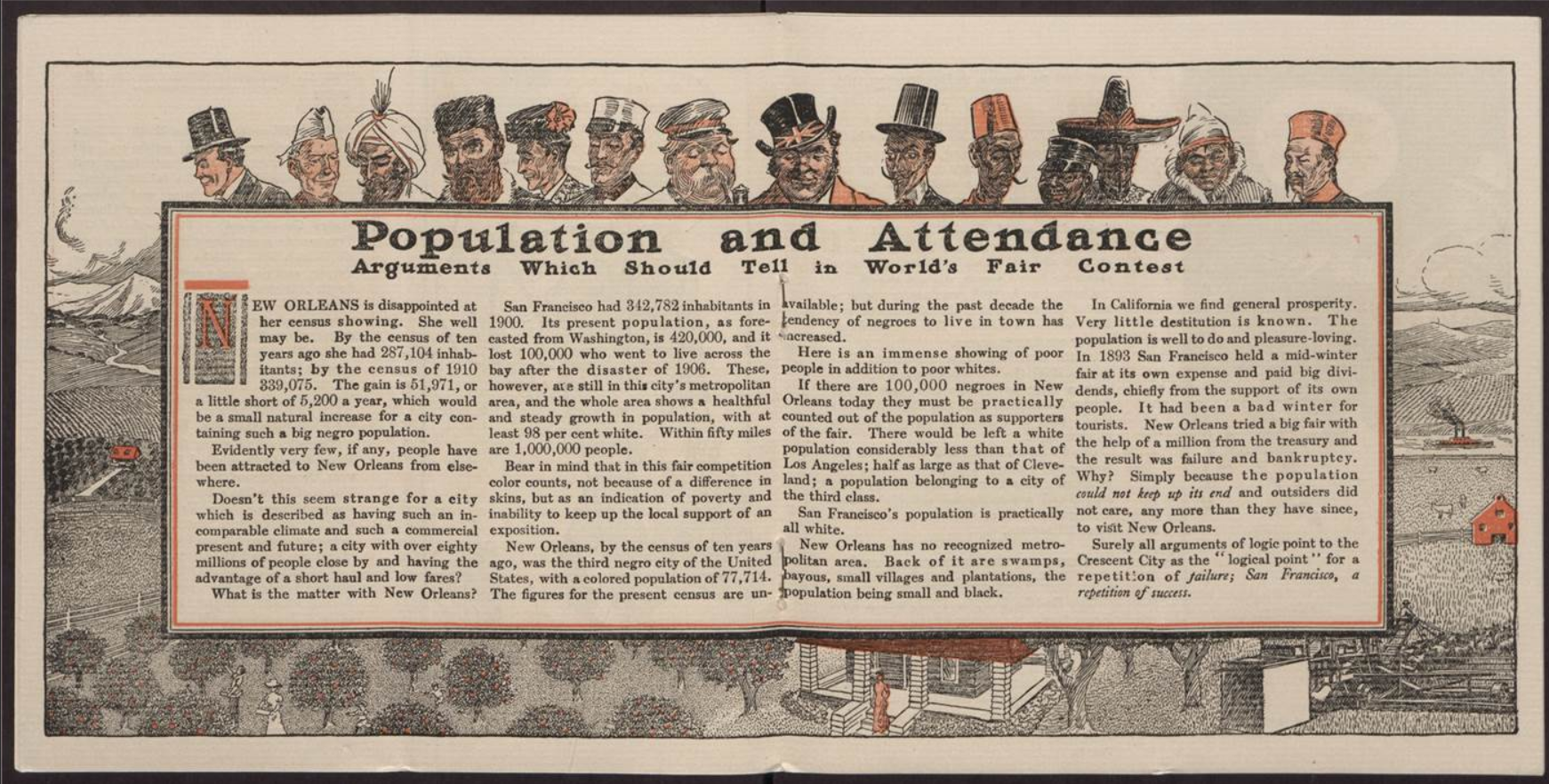 Drawing on data from the previous census, the pamphlet implored readers to “Bear in mind that in this fair competition color counts, not because of a difference in skins, but as an indication of poverty and inability to keep up the local support of an exposition”. Contrasting New Orleans’ status as the “third negro city of the United States” with the erroneous claim that San Francisco was “at least 98 per cent white”, the pamphlet attacked the Southern city as underpopulated, undesirable, and poor. Despite California’s best efforts to deter African American migrants and Asian and Southern European immigrants, and to eradicate or disempower its Native American and Mexican population, San Francisco was not as racially homogenous as boosters claimed.[2] Yet race, and its supposed equation with wealth, was central to the pamphlet’s arguments.

Race has also been central to the work of world’s fair scholars. The Southern fairs have been examined as sites of black marginalisation and protest, while St Louis’ 1904 exposition has been held up as a mass exercise in the promotion of America’s overseas empire in the Philippines. The live displays of people of colour on the fair’s entertaining midways have also been studied as popular expressions of the nation’s racial hierarchy.[3] While the Adam Matthew collection makes further research in these areas possible, it also points to the less explicit ways in which expositions shaped and reflected the racial politics of the day, and how city boosters sought to present their localities to national and international audiences.

Indeed, the ability to see the world and its peoples in a day was one of the key appeals of a world’s fair; a fact not lost on Western boosters. While the centre-fold scorned New Orleans’ racial diversity in its text, the accompanying illustration depicted stereotypical racial ‘types’ that would not have looked out of place in an advertisement for a world’s fair midway. Of varying skin tones and adorned in suggestive hats, the illustrated figures alluded to California’s demographic reality. Yet rather than equating this heterogeneity with poverty as the text did so explicitly in relation to New Orleans, the irreverent artwork framed the West Coast’s population as an alluringly exotic backdrop for the eager domestic tourist.[4] 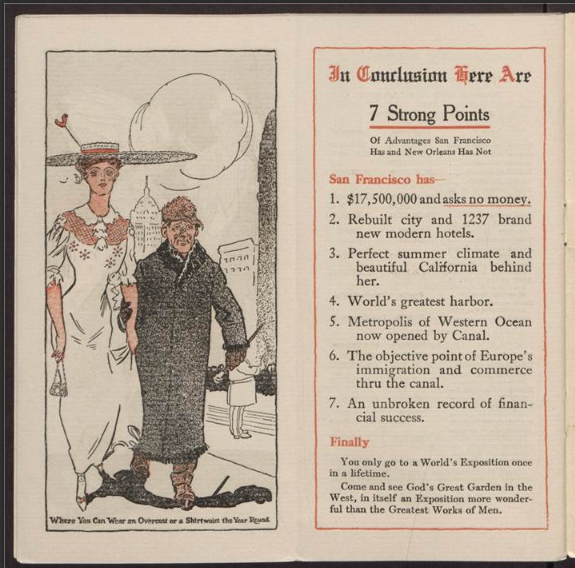 This clever piece of city boosterism aligned with the burgeoning ‘See America First’ campaign, which had been emboldened by the war raging on the European continent.[5] Promising that a “trip to San Francisco is through the world’s scenic wonderland”, the pamphlet urged readers to keep their dollars in the country, and acquaint themselves with the “sights to be seen in their native land”. Despite the international impetus of the exposition form, nationalism ruled the day.

World’s fairs can reveal so much about the hopes and anxieties of the host and visiting nations. Popular exhibits and eminent guests point to the ability of the exposition medium to disseminate ideas and shape extant knowledge. Yet delving into the minutiae of exposition planning and competition can also add nuance to these stories of global reach and national self-promotion, and point to the localised efforts to discern what would ‘make America great’ at the world’s fair. With the globalising agendas of international expos increasingly under attack, a fresh look at the competing – and often contradictory – interests of fair organisers, participants, visitors, and opponents can perhaps remind us what all the fuss was about, and why we should still care about the world of fairs.

[2]Jason E. Pierce, Making the White Man’s West: Whiteness and the Creation of the American West (Boulder: University Press of Colorado, 2016), 7-10. [Free electronic version of this text: http://upcolorado.com/university-press-of-colorado/item/2744-making-the-white-man-s-west] See also Campbell Gibson and Kay Jung, ‘Historical Census Statistics on Population Totals by Race, 1790 to 1990, and by Hispanic Origin, 1970 to 1990, for the United States, Regions, Divisions, and States’, Working Paper Series No.56 (Washington D.C.: U.S. Bureau of the Census, Population Division, 2002).

Patient Zero and the Making of the AIDS Epidemic by Richard A. McKay
Review: 'Legacies and Lifespans: Contemporary Women’s Writing in the 21st Century'
(In)Visibility, Race and Ethnicity in American Women's Writing throughout the Twentieth Century
Social Disorder: Publics, 1968, Amateur photography and Vivian Maier
The Un/Incorporated, Continental, Overseas, Global States of America: The Grammar of Jurisdictional ...
Judge Dredd’s Burger Wars: Intellectual property, self-censorship and new exceptions
Over the Ice: Polar Exploration from the Air
Obama’s West Point Vision: Or, How to Retreat from Military Intervention and Democracy Promotion

Emily Trafford is an early career researcher who works on race and exhibition in the Progressive Era, particularly focusing on the world's fairs on the West Coast. She completed her PhD in 2016, and is currently lecturing at the University of Manchester.
View all posts by Emily Trafford →
Tagged  C20, Cultural History, History, Politics, Race, Soft Power.
Bookmark the permalink.