Our “Women in America” blog series for Women’s History Month 2015 is now drawing to an end. We would like to thank the Society for the Study of American Women Writers (SSAWW) and the Society for the History of Women in the Americas (SHAW) who joined us in putting together this diverse and exciting blog series that ran for five weeks in total and included 16 posts. Here we have collected and summarised all of those posts.

Society for the Study of American Women Writers‘s blog series focused on American women writers and explores the field of women’s writing through several lenses that range from recovery to religion and from war to transnationalism. By no means comprehensive in scope, this series of nine posts by SSAWW members offers snapshots into the field and its on-going conversations. 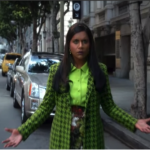 Lean Milne opened the series with a post about how ethnic American women writers tackle the idea and status of invisibility.

“Contemporary ethnic American women writers have a complicated and conflicted attitude towards (in)visibility, suggesting that visibility is not the automatic cure for invisibility or the stigmas associated with it. . . Other writers, however, have begun to explore the possibilities available to them with invisibility. Moving within the space of the unseen and the unheard, what access would such women have to agency?” 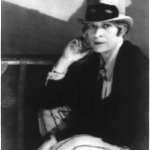 In the second post of the series, Bethany Mannon explores how three lesser known white American women modernists (Janet Flanner, Sylvia Beach and Kay Boyle) who “shaped and recorded life” in the expatriate community of 1920s Paris go beyond the “‘expected’ subjects of women’s autobiography.”

“Scholar Shari Benstock lists the ‘expected’ subjects of women’s autobiography: women in conflicting and constricting roles; black women writing in dominant white cultures; public women defying patriarchy; tragedy and trauma; and loss of identity. Flanner, Beach, and Boyle wrote accounts that do not neatly fit these concerns, and develop public voices that anticipate the memoirs of subsequent decades. By expanding personal narrative to include more than introspective contemplation, they broaden readers’ understanding of the literary period and of autobiographical identity.” 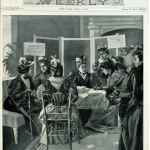 Ana Stevenson, author of the third post in the series, focuses on the lesser-known author and activist Lillie Devereux Blake to introduce her life and work as an exemplary, albeit largely forgotten, nineteenth-century reformer.

“From her early years as a belle, Lillie encountered the often competing expectations for nineteenth-century American women and later explored these incongruities in her writing. Blake brought a willingness to critique the cultural veneration of womanhood to her work and activism as an author and suffragist.” 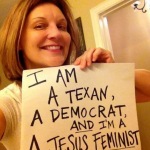 “Though there are a number of factors that contribute to a certain cultural argument’s acceptance at a particular place and time, Sarah Bessey’s success with Jesus Feminist (2013), at least in part, seems to be based on her expressions of solidarity with nineteenth-century American women and her subtle, but clear, distancing from second-wave feminists like Betty Friedan. The title of her article, “Reclaiming Feminist,” published prior to the release of her book, speaks to her use of the nineteenth century rather than the more recent past—namely the 1960s—to bolster her claim that Christianity and feminism are not mutually exclusive.” 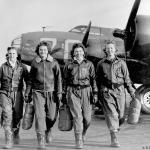 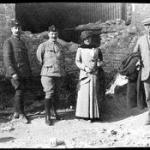 Shelli Homer and Brianne Jaquette in the fifth and sixth posts of this series argue that the writing of American women writers on foreign wars – from World War I to the recent conflicts in Afghanistan and Iraq – has been a body of work that has historically been ignored by the scholars of American literature. Part one overviews the topic and discusses nonfiction writing. Part two turns to poetry and fiction and includes a bibliography of additional primary and secondary resources.

“One key reason women’s literature of war has been overlooked is due to questions of authority and representation permeating the field of American war literature. World War I is the starting point for our look at American women and war writing because it had a particular impact on the issue of literature and authenticity. While there had previously been a belief that only those who had been in the war could represent it truthfully, World War I involved writers who went to war and soldiers who pursued writing after the war, which heightened expectations of experience (Olin-Ammentorp, “Willa”). These expectations did not necessarily exclude women writers, since they served on or near the war front in various capacities, but they did limit the types of acceptable writing women could produce and have contributed to gaps of missing women’s war literature in the canon. It is not that the literature does not exist, but it has not been given enough consideration.” 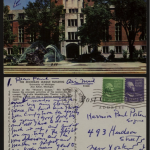 Liz DePriest in the seventh post in the series trains our eyes on Katherine Ann Porter’s letters to explore the transnational influences apparent in her writing.

“In her interview for The Paris Review’s “The Art of Fiction” feature in 1963, Porter suggested she “was always restless, always a roving spirit” who told her father around age six, “I want to go and see the world. I want to know the world like the palm of my hand.” The striking extent to which Porter achieved this early ambition is documented by her family correspondence, which the University of Maryland Libraries’ Katherine Anne Porter Correspondence Project will make publicly available online in 2015. The publication of these letters invites and facilitates further study of the reasons Porter traveled, the conditions under which she wrote, and the ways her fiction was shaped by her “roving spirit” and her travels.” 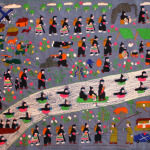 The penultimate post in the series, written by Corey Hickner-Johnson, examines recovery through three writers (Margaret Walker, Leslie Marmon Silko, and Kao Kalia Yang) that reclaim their own family and cultural stories and histories.

“Non-written stories prompt investigation into our understanding of recovery work: What is it?  Who it is for?  What does it claim?  And what if there is no tangible text?  Ava Chamberlain explores issues in recovering “textless” women’s lives, asserting that without text, access to these lived experiences are blocked (34).  Certainly, it is difficult to recuperate conventionally textless stories—especially those of historically marginalized women and especially across cultures.  But perhaps, in some cases, these stories are not as blocked as we think they are.” 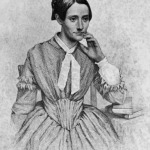 In the final post of the series Sean Trainor explores the contradictions in the life and literature of Fanny Forester.

“Forester’s collected short stories went through a whopping nine editions in fewer than four years. . . Why did Forester’s work resonate so strongly with American readers?

Forester’s life and work spoke to a moral and existential conflict that resonated with many of her middle-class female readers: the tension between fashion and piety – between the iridescent finery of the ton and the more-enduring treasure of life in heaven.”

The Society for the History of Women in the Americas‘s (SHAW) blog series showcases the diversity of research and differing experiences of scholars who are based in the UK but work on women in the US.  The six posts also highlight the challenges facing academics (both those researching transnationally and more generally) as well as the valuable insights that continues to emerge from this cross-disciplinary field. 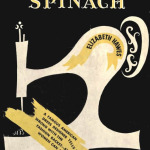 The series opens with Alison Goodrum’s discussion of visiting the designer Elizabeth Hawes’ archives in New York.  Professor Goodrum explores the challenges and joys of both using overseas archives and starting a blog about her research trip.

“For the historian, tempus fugit rings particularly true in those precious – often all too short – moments snatched and savoured at an archive or in a museum collection.   Such visits may be thought of as the source of scholarly, and even spiritual, succour: reaching the parts that other academic life can’t (to misquote the slogan).  In short, archive visits are to be much-anticipated, optimised and relished.” 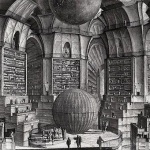 In the second post, Charlie Jeffries shares her experiences of embarking upon a PhD about the US in the UK and gives practical tips for others thinking of doing likewise.

“By the time you are a few months in to your PhD, you have probably amassed a small mental collection of your least favorite tricky questions that people ask you about your work. For me, nestled in amongst ‘But does that really count as history though?’ and ‘Did you know that someone just published a book on that?’ is ‘So why are you studying American history in the UK?’ Giving an answer is fairly straightforward. The experience of doing such research is not always as simple.” 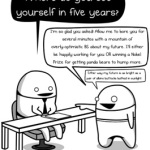 Moving from postgraduate research to an early career perspective, the third post is an honest account about the search for employment.  David Doddington writes about his experiences and provides useful advice for other scholars in this transitional phase.

“While completing and defending my thesis was extremely fulfilling, it is fair to say that the stress of attempting to find a job at the end of the process left me less than thrilled and with substantially less hair. On the surface my career progression seems quite smooth, but in reality this was a time of uncertainty and, at times, real panic over whether I would keep a roof over my head.” 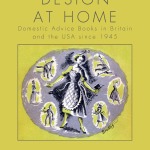 “I was struck by the way in which some of the material I read focussed exclusively on the US to the extent that inaccurate generalisations were made about the periodization and content of the domestic advice genre. This was not my first taste of the US-centrism associated with the American exceptionalism that has now been effectively challenged and deconstructed, but it was the most perplexing because it was so closely related to my research.” 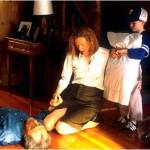 From one highly gendered genre to a completely contrasting one, in the fifth post Stefania Ciocia revisits the noir canon.  Dr Ciocia offers a new reading of the gender dynamics in classic films and texts such as Laura.

“After all, hardboiled fiction is by definition a tough guy’s game, or at least it is conventionally understood to have been so until the 1980s, when Sara Paretsky and Sue Grafton changed the rules with their hardboiled female investigators. Perhaps it is high time that we revisited this (admittedly rather simplified) chronology. In the 1940s, Hughes, Caspary and Sanxay Holding had already started to change the genre, calling to task the misogyny of the tough guys’ world with their complex female characters, who defy noir stereotypes without reneging on their femininity.” 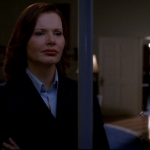 Finally, in the sixth post Gregory Frame considers the recent fictional depiction of a female US president in Commander in Chief and asks whether this television series gives us clues as to why there has yet to be a woman elected into the Oval Office.

“The president should be the nation’s ‘protector’, a conventionally male position associated with fatherhood, leadership and heroism in battle. This post explores the ways in which the fictional presidency, despite exploring several departures from the white, masculine norm in the past twenty years, has struggled to imagine the possibility that a woman could occupy the role because of the rigidity of the office’s masculine conceptualisation.”

Symposium Panel Review: ‘Visualising the Americas: Kent’s Third Annual Americanist Symposium’, The U...
Patricia Highsmith's 'Authentic' American and the Performative Subject in 'The Talented Mr Ripley' (...
"Be broad, be bold and be aware": Review of the 2014 HOTCUS Postgraduate and Early Career Researcher...
Review of ‘Myths in Culture’ Postgraduate Symposium 2014
MAGA, White Evangelicals, and the Objection to Kamala Harris
“Atomic Ayatollahs”: The ‘Islamic Bomb’ in 1980s American News Media
Fear and Motels in Las Vegas: Segregation and Celebrity on the Strip
An Assessment of the American Civil War Sesquicentennial