“Right to Try” (Again): A history of the experimental therapy movement

In recent weeks and months, momentum has increased on Capitol Hill to craft “right to try” laws that would profoundly change the medical landscape. The national legislation will allow terminally ill patients more access to experimental therapies (drugs, biologics, devices) that have completed Phase 1 testing. Powerful pharmaceutical and biotech concerns have been largely quiet. The Trump administration, for its part, has underlined the issue, not only in the State of the Union Address but in VP Mike Pence’s active support.

Critics in academia and medical circles argue that the proposed “right to try” legislation would undermine public health and circumvent Food and Drug Administration (FDA) oversight, while supporters argue that severely ill patients ought to have more freedoms to take experimental pharmaceutical products. Current reportage of the movement has rightfully referenced the HIV epidemic, the film Dallas Buyers Club (2013), and the drive for improved access to unapproved drugs in the 1980s. However, these are not the only ways to view contemporary deliberations about the nation’s drug regulatory architecture.

The right to try movement – and any legislation – embody long-standing struggles about the most appropriate treatment for public and individual health. These struggles have pitted mainstream medical practitioners against interlopers, and regulators against drug companies.  Compassionate language about desperate patients with few options has run alongside intense legal wrangling, consumer activism, and prolonged discussions about the validity of medico-scientific data.

Contemporary “right to try” advocates like Sen. Ron Johnson (R-Wis) and Greg Walden (R-Ore) are not altogether new. Neither are emotional patient stories. The influence of interest groups and think tanks, such as the Koch Foundation and Cancer Treatment Centres of America, has been detectable since at least the 1960s. Indeed, the effort to allow Americans with life-threatening illnesses access to unapproved and experimental drugs has long historical roots. 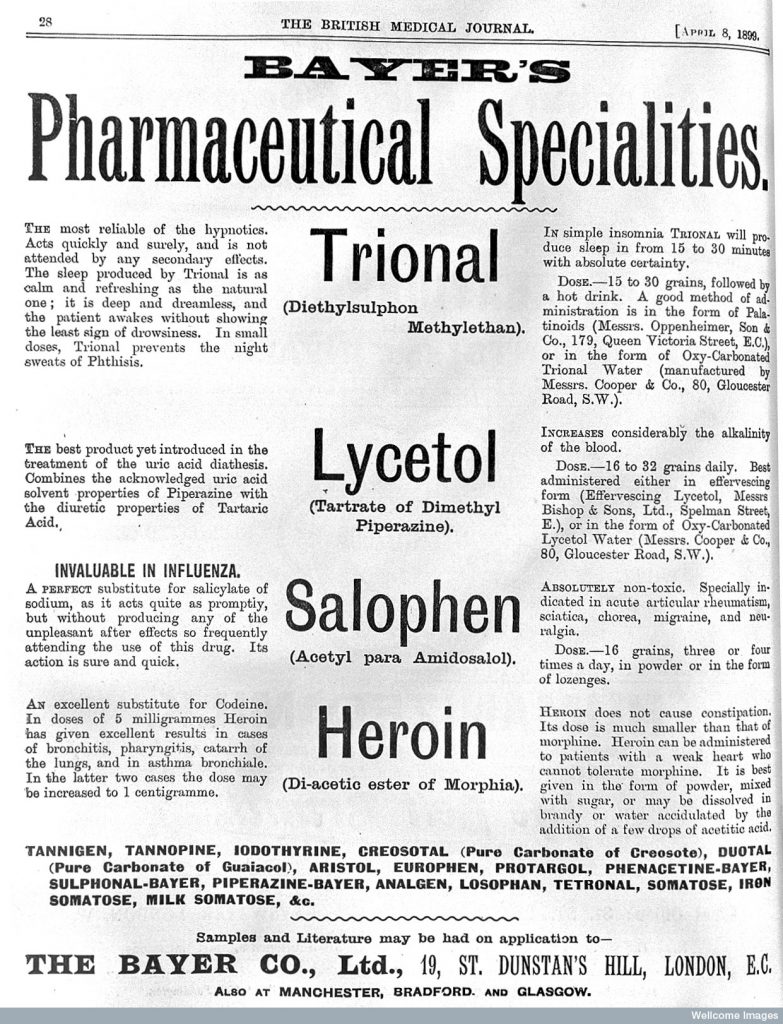 Since at least the turn of the 20th century, alternative medicines, access to drugs, and quackery have shaped professionalized medicine. Today’s right to try rhetoric is reminiscent of some recent debates. For instance, advancements in American hospice care, which included much talk about greater respect for the dying, occurred in the 1960s. Zelda Foster authored an influential paper in 1965 that critiqued the “conspiracy of silence” facing dying patients in hospitals.[1] In 1969, Elizabeth Kubler-Ross published On Death and Dying. Many of the right to try arguments revolve around a more progressive approach to end-of-life care, ideas first articulated a half century ago.

Then, during the 1970s, Laetrile forced the medical establishment’s hand. Widely promoted as an effective cancer treatment, it crystallized anxieties about consumer choice, government intrusion, and the availability of drugs. Found all over the globe, in such foods as chick-peas, lentils, lima beans, cashews, barley, brown rice, and apricot pits, Laetrile offered an alternative to traditional treatments, including chemotherapy. It also gained prominence when movie actor Steve McQueen used Laetrile in tackling his cancer. Numerous states, as is happening now with right to try, legalized access to the drug.

Pro-laetrile groups were antagonized by the FDA’s approach to Laetrile and regarded the decision to oppose its use as emblematic of a broadly intrusive and imperious government. Even though there was no substantive proof underpinning Laetrile’s claim of effectiveness, its promoters still sought to legalize it. Laetrile leaders cleverly used the Founding Fathers of the United States to underscore concepts of therapeutic autonomy.

Then, just as today, a network of interest groups, including the International Association of Cancer Victims and Friends and Cancer Control Society, critiqued out-of-date policies. Conservative think tanks also proved influential then, just as the Goldwater Institute and Koch Foundation have today. According to Time, Laetrile attracted “an avid, almost evangelical band of followers,” a group that included members of the “right-wing John Birch society,” an ultraconservative group that pushed back against Communist infiltration and expanding government. These supporters viewed the FDA’s ban on Laetrile as “a restraint on individual freedom.”[2] 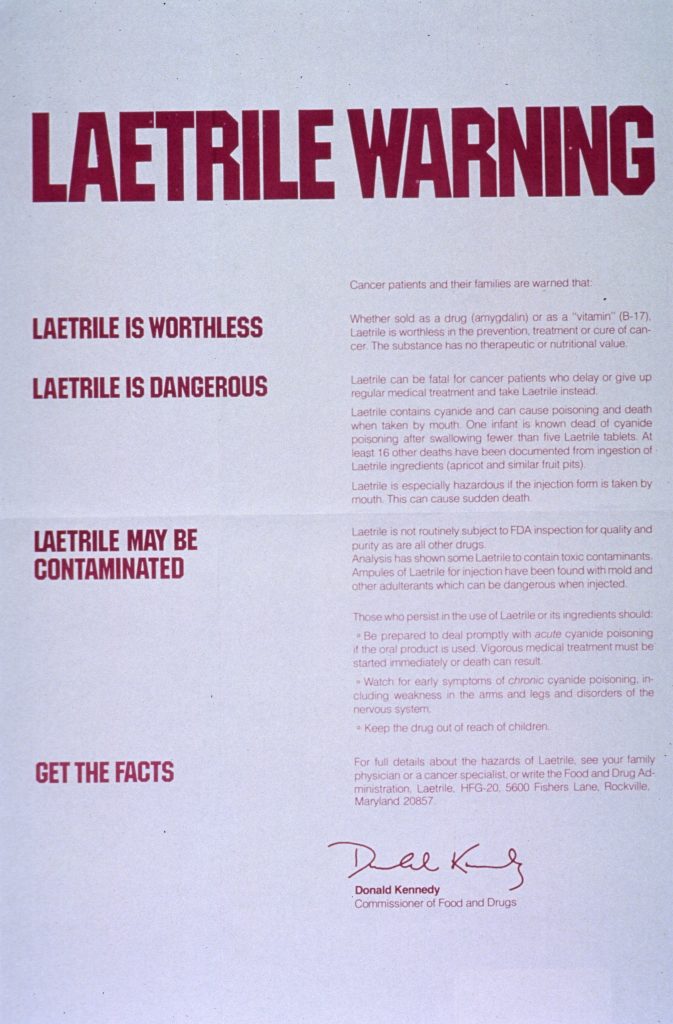 By the early 1980s, heroin emerged as a humane solution for terminally ill cancer patients in the United States. Judith Quattlebaum, who had established the Committee on the Treatment of Intractable Pain (CTIP), fought a grassroots battle similar to ones waged now. A life-long Republican, she strove for a more humane and patient-centered model for dying patients, one where they might have a fuller list of drugs to choose from. William F. Buckley Jr., a founding father of modern American conservatism, took up her cause. He championed the use of heroin for the terminally ill. Polices that enabled access were needed, Buckley argued. And he noted that unbendable American morality allowed teenagers in ghettoes to acquire heroin, while their grandmothers “died in pain under the hygienic auspices of the law.[3]

Pushback to the legalization effort was strong. The American Medical Association, the American Hospital Association, and the Reagan Administration, along with various medical experts, expressed serious reservations about proposed bills in the House and Senate. It was not passed, unlike in Canada. Part of the skepticism rested on heroin’s effectiveness, which had divided the medical community. Another part was based on the multiple social, political, and racial meanings of heroin itself.

On a broader level, the debate about proper drug regulation polarized Americans in the early 1980s. Think tanks such as the Heritage Foundation and American Enterprise Institute proposed changes to the FDA’s mission as a means of unleashing the American pharmaceutical industry. The problem, according President Ronald Reagan, lay in the restriction of freedom of choice for American consumers, since the agency had established itself “as the doctor and decided that they will tell us what medicines are effective.”[4]

These types of sentiments are emanating from the Trump administration, with FDA Commissioner Gottlieb also supporting the principles of “right to try” because the agency, he feels, will not lose a significant amount of regulatory authority.  As for the passage of the law, Republicans suffered a setback in mid-March when a majority of member in the House of Representatives rejected the bill.  It was a defeat for Republicans, although House Majority Leader Kevin McCarthy of California vowed another effort was on the way. “We will try again, pass legislation, and bring hope to those whose only desire is the right to try to live,” he argued. This type of language has a long legacy.

Lucas Richert is a Lecturer at the University of Strathclyde. He is the author of Conservatism, Consumer Choice, and the FDA during the Reagan Era: A Prescription for Scandal, which examined pharmaceutical regulation in the 1970s-1980s, winner of the 2015 British Association for American Studies Arthur Miller Prize. He is the Co-Editor in Chief of Social History of Alcohol and Drugs and author of the forthcoming Strange Medicines: Science, Culture, and the Regulation of Drugs (McGill-Queen’s University Press, 2018).
View all posts by Lucas Richert →
Tagged  Alternative medication, C20, C21, Experimental therapies, History, Politics.
Bookmark the permalink.