Documentary Review: The Black Panther Party: Vanguard of the Revolution

“Sorry I had a fight in the middle of your Black Panther party,” Forrest Gump apologises to a group of leather-clad, gun-toting, hyper-masculine African Americans in the 1994 film of the same name. A year later, Mario Van Peebles released his partially fictionalised and frequently criticised film Panther. Revising distortions of the Party’s inception, Peebles tried to “counter the media culture’s longtime condemnation of the Panthers with a correction narrative.” Unfortunately that narrative was confined to the dramatic symbolism of guns, black berets, leather jackets and police clashes – symbolism that was often the subject of the media’s warped portrayal in the 1960s. On-screen depictions of the Black Panther Party conveniently stick to violent portrayals of male leaders, condensing their historical narrative into a one-dimensional discourse.  Refraining from the Party’s complexities, where black self-determination, self-defense, class, race and gender all intersect, therefore presents the Panthers as the Civil Rights Movement’s evil twin.

However, Stanley Nelson, director of the newly released The Black Panther Party: Vanguard of the Revolution, acknowledges the revolutionary organisation as a phenomenon that walked, talked and dressed differently. He ensures the collective memory of the 1960s is remembered when he plays upon prolific Panther iconography by incorporating footage of afro-clad Panther supporters dancing to a soulful backdrop of late 60s and early 70s music. Nelson strikes a perfect balance when he subtly underscores the proliferation of Panther stylisation throughout the decade. He refrains from tipping the scales in the direction of usual media manipulations and instead marries the stylised, swaggering interpretations of Party members with the role of J. Edgar Hoover’s COINTELPRO and the frequently overlooked Survival Programmes. In late 1969, there was an ideological and organisational rift in the Oakland headquarters between Minister of Information, Huey P. Newton, and Minister of Education, Eldridge Cleaver. Panther fatalities and incarcerations influenced Newton to put down guns and become involved in community organising, advocating the same for the Panther rank and file. Cleaver, however, exiled in Mexico, Cuba and Algeria from 1968, stood firmly for armed rebellion. Community organising, proposed by Newton and Bobby Seale, became known as Survival Programmes and the Panthers set up Free Breakfasts for School Children, Free Medical Clinics and Black Liberation Schools. Nelson’s union between traditional Panther iconography and the historically marginalised Survival Programmes therefore ensures the politics of liberation and revolution avoid being made a fashion commodity.

Paying close attention to the chronology of Panther history, Nelson opens with Stokely Carmichael’s first expressions of ‘Black Power’ in 1966 Greenwood, Mississippi, before taking his audience on a fast-paced timeline of the Black Panther Party, starting with their demonstration against gun laws at Sacramento Statehouse. Peppering the documentary with character profiles of the Party leaders, he initially introduces co-founders Huey P. Newton and Bobby Seale before scratching the surface of Eldridge Cleaver’s complicated character. With a large focus towards the end of the documentary, on Seale’s political aspirations and his run for the Mayor of Oakland in 1973, Nelson intersperses Newton’s tumultuous history throughout the documentary’s entirety. Showcasing Newton’s natural intellect, Nelson ensures he balances the Panther leader’s gifts with his demons by honestly portraying Newton’s descent into paranoia, drugs and embezzlement – occasionally using emotive interviews from former Panther members like Ericka Huggins and Elbert “Big Man” Howard. 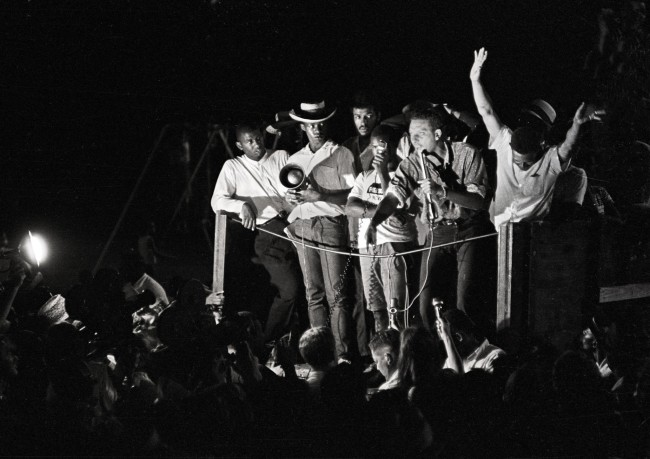 Quietly tracing the genealogy of Black Power history by discussing Frantz Fanon’s The Wretched of the Earth as the Party’s main inspiration, Nelson also attends to another overlooked facet of Black Panther history – their communist inclinations. Nelson introduces the Panther dedication to see beyond race through fighting for the empowerment of the lower class. Unpacking the Panther co-option of Marx and Engels’ view on the lumpen proletariat, Nelson shows how the Panthers’ movement was aimed at the lowest rungs of the American class system. Whilst Marx and Engels approached “the rouges, prostitutes, thieves, hustlers, murderers, gamblers, and paupers” of the lumpen proletariat with scepticism, the Panthers saw the value in unifying the working poor and the criminal class, by mobilising the African American “brothers on the block” to become the vanguard of the proletarian revolution.

The collapse of the Black Panther Party is multifaceted and Nelson ensures no solo cause accepts total blame. Reaching its peak in 1968-1969, the Party failed to establish longevity and by 1982 it had officially ceased operations. Some individuals blame the leaders; others blame the ideological structure of the Party. Some feel the buck stops with Huey P. Newton, whilst others turn a blind eye to internal fractions and hold J. Edgar Hoover solely accountable. Nelson expertly takes his audience on a journey that exposes not only the often-overlooked successes of the Party, i.e. the Survival Programmes, but a journey that highlights a multitude of events that led to the Party’s downfall. Newton’s demise may have been a contributing factor through his isolation and manipulation of loyal members, but the role of J. Edgar Hoover’s COINTELPRO (Counter Intelligence Programme) is correctly attended to in the documentary as a contributing factor for the Party’s extinction. Hoover deemed the Panthers the greatest threat to the internal security of America and created COINTELPRO to: prevent the coalition of militant black nationalist groups; prevent the rise of a “messiah” who could unify and electrify the black nationalist movement; prevent violence on the part of black nationalist groups; and prevent militant black nationalist groups and leaders from gaining respectability. The most ‘successful’ target of the COINTELPRO was Fred Hampton and Nelson gives a worthy amount of airtime to the Illinois Chairman who was killed by the Chicago Police Department after a raid at his apartment.

The Black Panther Party: Vanguard of the Revolution is a perfect introduction for anyone wishing to learn more about the Panthers. His fair and well-balanced documentary unpacks, albeit quickly in 1 hour 53 minutes, the complicated intersections of Black Panther history, by paying attention to gender, race and class. Nelson complements the unseen archival footage and photographs with interviews with Kathleen Cleaver, Elbert “Big Man” Howard, Ericka Huggins, Elaine Brown, Wayne Pharr and Emory Douglas to name a few. Showcasing the good, the bad and the ugly of the Black Panther Party, Nelson produces a documentary that highlights how, although the Panthers had no money and no power, “they created something that we are still talking about today.”